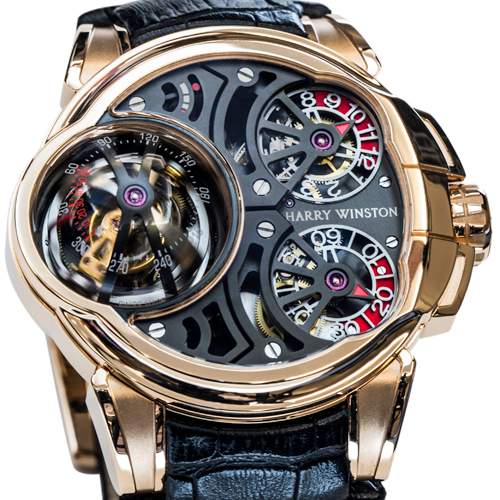 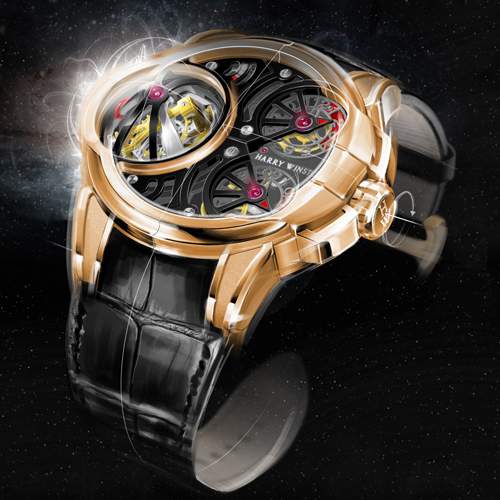 Harry Winston’s Histoire de Tourbillon is a sophisticated collection of limited edition timepieces dedicated to the craftsmanship of one of the most revered and complex horological complications. Launched in 2009, each Histoire de Tourbillon underscores Harry Winston’s continued pursuit of excellence in innovation, by presenting the tourbillion in a series of spectacular new forms.

To keep the focus firmly on the tri-axial tourbillon and its remarkable execution, watchmakers employed an unprecedented approach that could be called “watchmaking urbanism,” and led to the creation of a miniature mechanical metropolis. The movement and its various territories were reorganized on different levels like a mechanical landscape: a low-lying movement, bridges placed just below the surface, and the tri-axial towering over the scene from within its dome. The first stage, which involved open-working the movement in a ‘geographically’ minimalist style, served the sole purpose of whittling the mechanism down to its bare essentials. Next came the dimensional work – to ensure the mechanism remains prominently enthroned within the overarching sapphire crystal, the glass of the ‘porthole’ is fixed to a truncated base – a true tour de force in itself.

The spherical bridges beneath the Tourbillon are hollowed out to create passages beneath which the power reserve is cleverly fitted, all without any loss of function or coherence.

The case, which must form a single entity with the movement, is finely worked like a monobloc sculpture. Defined by both sharp and declining angles, as well as two- or three- dimensional volumes, this contemporary artwork is the result of in-depth conceptual thinking.

The hour and minute functions are symmetrically isolated on the display – an ambitious decision that generated a number of mechanical and architectural challenges. The counters had to fit within a narrow perimeter, while still remaining perfectly readable and yet smaller than the Tourbillon – the star of the show. Constant dialogue between all those involved in the development process made it possible to achieve the perfect, distinct symmetry of this exceptional watch.

Achieving such harmonious proportions and dimensions is all part of the same carefully choreographed act. The thickness of the movement required crucial choices in selection of the materials. Apart from the three-dimensional bridges, which are crafted in maillechort, all the other bridges are titanium and the disks are produced by galvanic growth. Weight calculations were an important factor throughout the design. To counter-balance the extreme lightness of the tourbillon carriages, a gold bridge was created to maintain the subtle balance of the carriages. This helps to ensure that despite the prominence of the tourbillon, the timepiece remains wearable.

Further demonstrating its dedication to freedom and excellence in design, Histoire de Tourbillon 5 is the first in the series to be crafted in rose gold. This variation continues in the open-worked movement, which is black instead of the conventional grey. From its quest for perfect symmetry, to the careful balance between construction and volume, to its bold choice in color – the Histoire de Tourbillon 5 expresses the House’s creative instincts in design, and pushes the series to the next level of innovation.