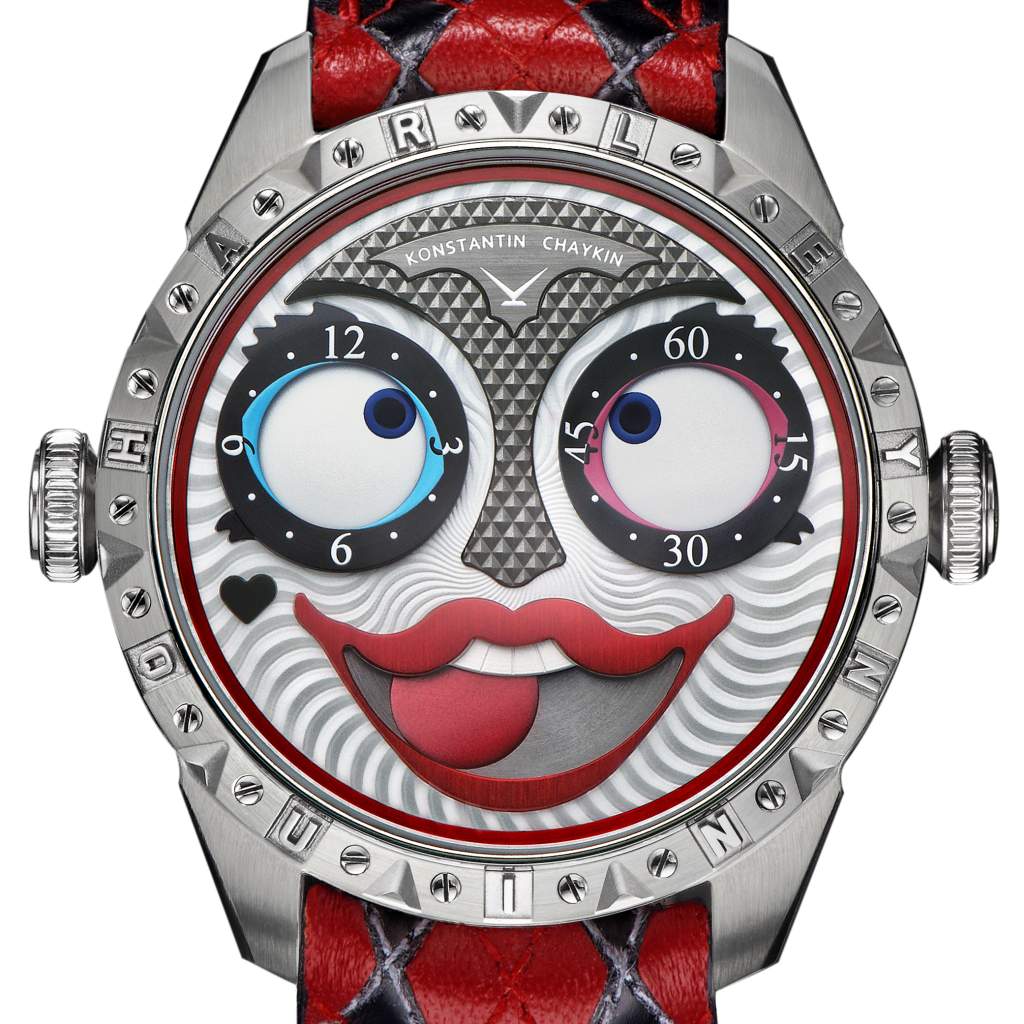 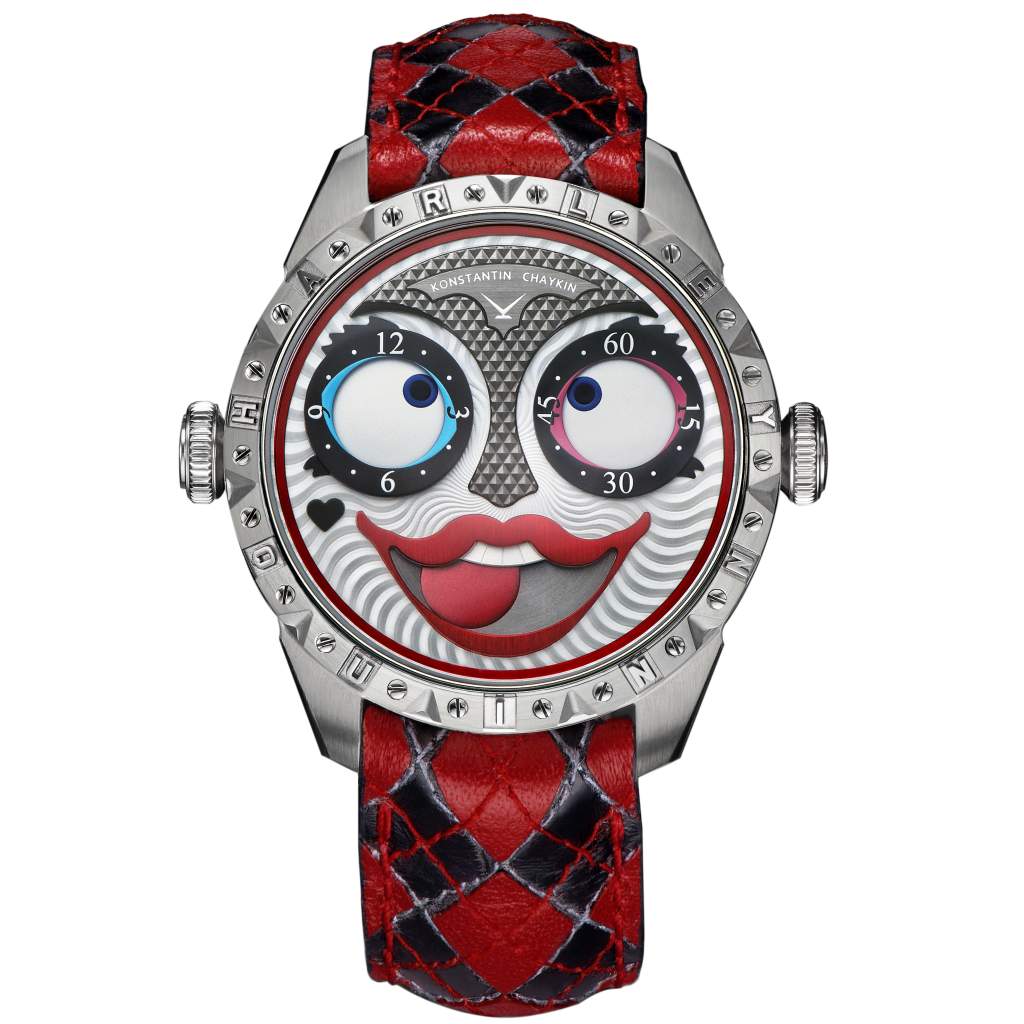 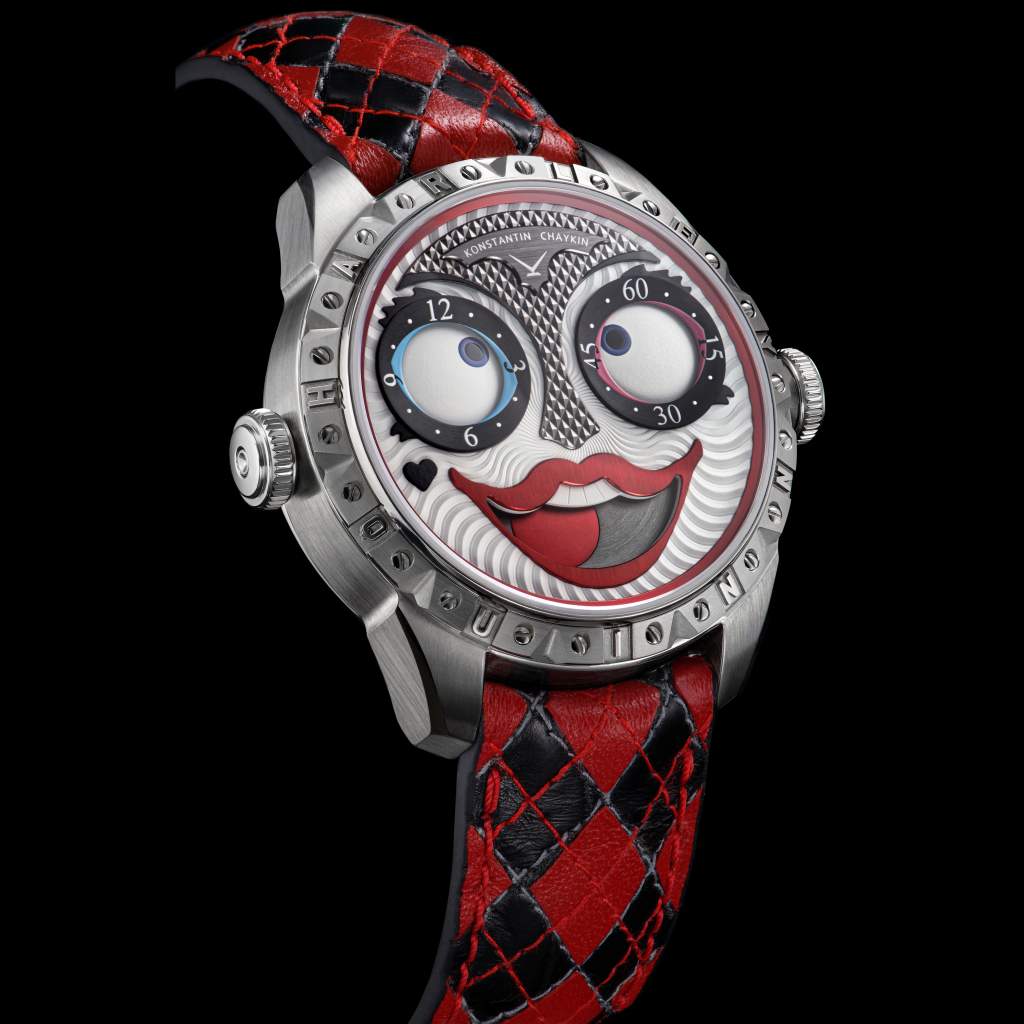 Thirty years ago, in 1992, Batman: The Animated Series creators Bruce Timm and Paul Dini came up with a new DC Comics universe character: the wily and fearless jester Harley Quinn. In 2017, Konstantin Chaykin created his first Wristmon named the Joker, and five years later his character is reunited with his “girlfriend:” the watchmaker introduces the Wristmon Harley Quinn, who in his imagination has become “an accompaniment and reflection of the Joker.”

Like the Joker, his “girlfriend” has an anthropomorphic watch “face.” But since this is the first female character in his Wristmon collection, Konstantin Chaykin reduced the diameter of the Harley Quinn’s steel case to 40 millimeters compared to the Joker’s 42 millimeters. Naturally, this does not make the new Wristmon a “lady’s watch,” but its rebellious and bellicose disposition is sure to appeal to female connoisseurs of fine watchmaking.

To make the character recognizable, the artist circled her “eyes” (hour and minute indicators) with turquoise and pink edging, transforming their shape from the usual round to expressive almond. On its cheek the Wristmon has a provocative heart-shaped tattoo, familiar to anyone who has seen Harley Quinn in The Suicide Squad. The use of classic watchmaking techniques, multi-layered lacquering and two types of guilloché engraving make the dial more expressive. Harley Quinn’s smile, like that of the first Joker, indicates the phases of the moon.

The watchmaker achieved an undeniable resemblance between the new Wristmon and its namesake from the DC Comics universe by reproducing the clownish features of the supervillainess: there is a reason why her name, Harley Quinn, is a play on Harlequin, a stock character from the Italian physical comedy theater commedia dell'arte. The Wristmon “wears” a small black mask, and Konstantin Chaykin transformed her two-pronged two-colored cap into a distinctive hairdo with pink and green ponytails. The watch leather strap is mottled with black and red diamonds like the Harley Quinn costume in the comic books and on screen.

The character’s recognizable features are mirrored in the “mysterious” disc-shaped rotor of the custom-designed movement. The rotor is embossed with a heart-and-diamond pattern and engraved with the official Harley Quinn logo. Unlike the Joker, the Harley Quinn’s rotor is not hidden under the case back: it has a sapphire crystal exhibition case back allowing a peek at the “mystery” design.