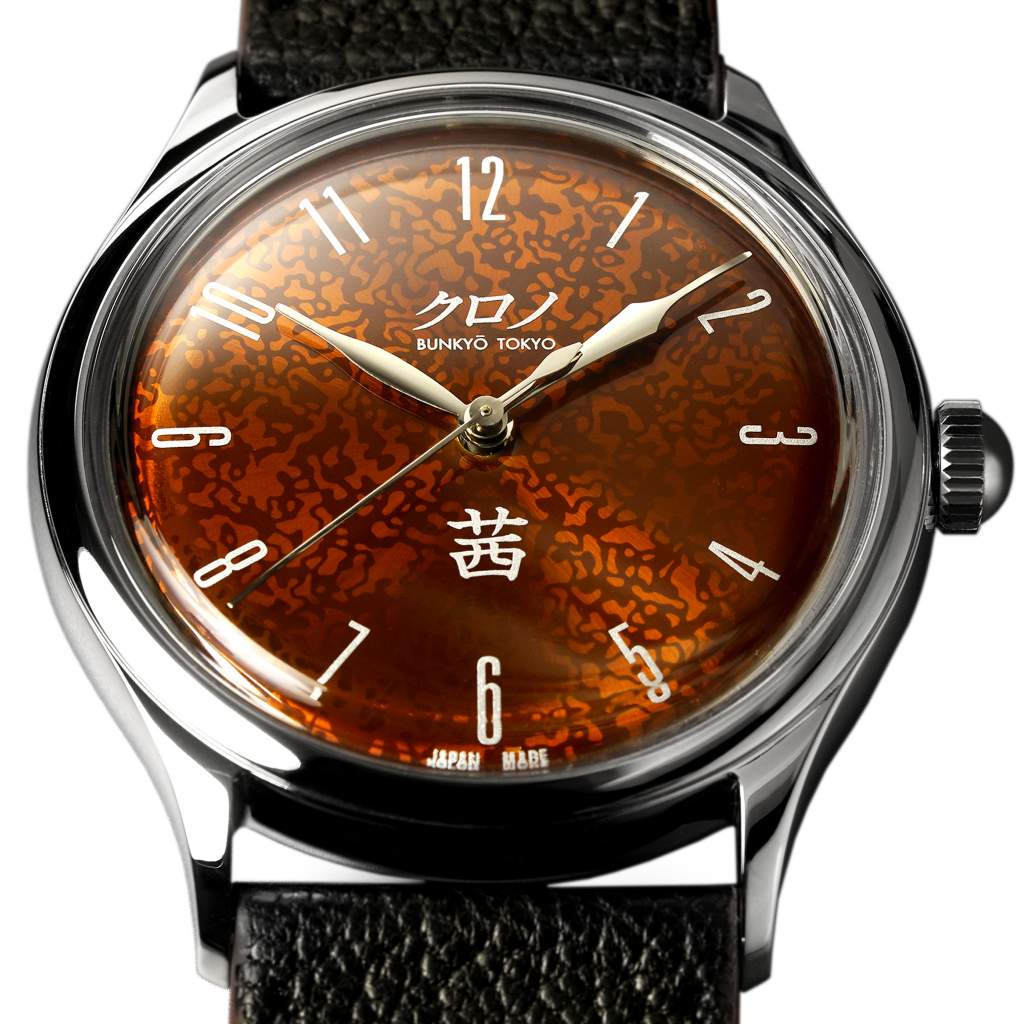 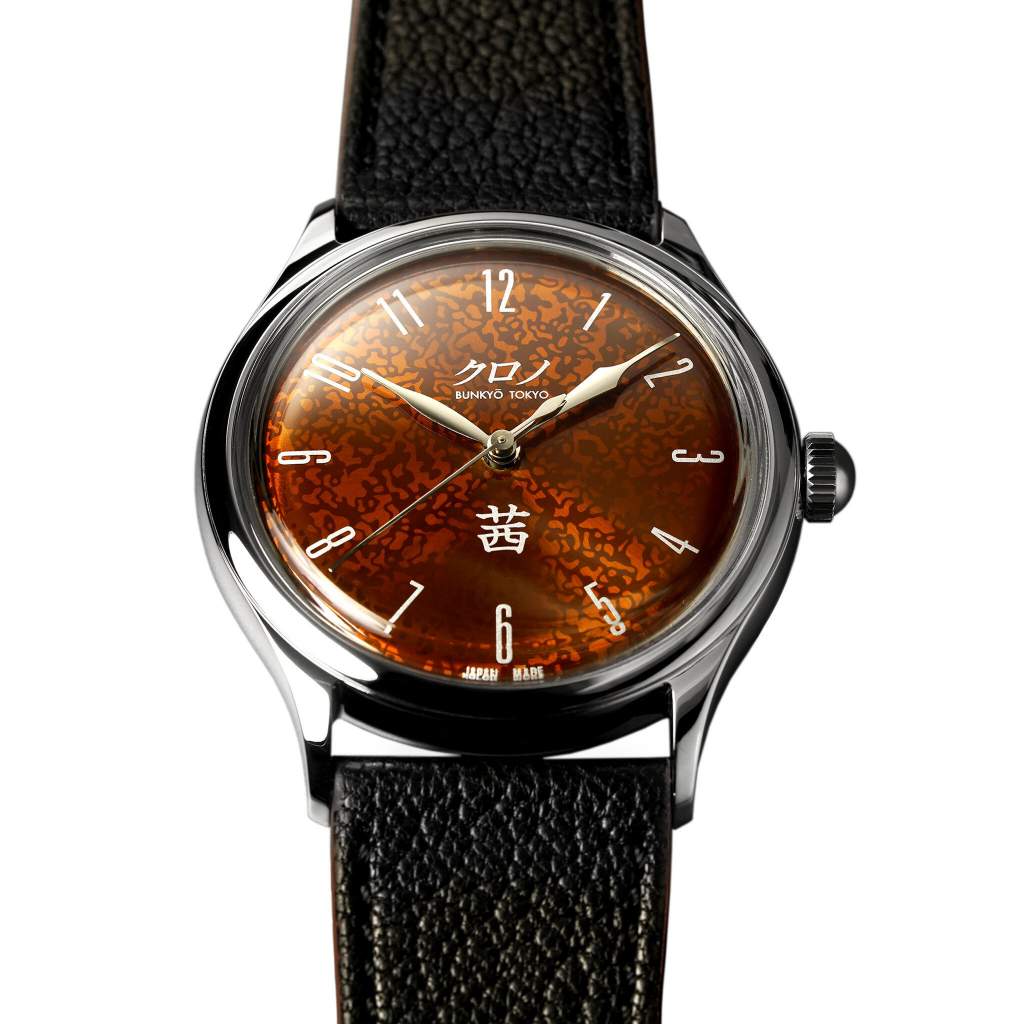 The KURONO Grand:Akane aims to redefine price competitiveness in the artistic watch genre. KURONO introduces our first artisan-level timepiece - the Grand:Akane '茜' - with a uniquely made urushi dial featuring a ‘Hamon (刃文)’ pattern that is finished with the traditional Japanese ‘Niiro 煮色’ chemical treatment, and then sealed by an additional layer of suki-urushi (transparent lacquer).

The result is a beautiful urushi dial of contrasting red hues, that leverages the unique thick box sapphire for lightplay. Additionally, the use of suki-urushi as the sealing layer of the dial will result in different color shades over time according to the usage of the owner. The Grand:Akane is the result of more than a year of development and its unique is created by a urushi master craftsman to Hajime-sensei’s design and exacting standards.

Hamon (刃文), meaning 'blade pattern', is a visual effect created by the hardening process typically done on blades. The pattern mimics that of a mountainous terrain with peaks and dips, and historically deemed as evidence of the maker’s effort to produce the finest work. In the case of the Grand:Akane, the Hamon visual effect is repeated throughout the dial giving it an ethereal contrast of lighter and darker red.

The origin of the Hamon dates back to the 8th century AD. Legend has it that the renowned swordsmith, Amakuni Yasutsuna, noticed that the emperor and his soldiers returned from battle with broken swords. After careful examination and the determination to create a blade that would not break mid-combat, Amakuni and his son spent 30 days in seclusion coming up with the solution, and ultimately tradition, of differentially hardening the blades, thus birthing the design of Hamon. Hajime-sensei designed his interpretation of Hamon as a homage to his ancestry to samurai blade makers on the patrilineal side.

The dial design is finished with arabic numerals in silver, and the character "茜" (Akane) at the 6 o'clock position alludes to the color of the dial based on the image of a daruma sunset.

The base dial is metallic and finished in a lighter red that is similar to the redder Japanese sunset (‘daruma’) that typically occurs during late-autumn to early-spring. A darker, non-metallic Hamon pattern reveals the base color by using the traditional Japanese ‘Niiro 煮色’ chemical treatment method.

Niiro (煮色) quite literally translates to the boiling/broiling of colour. It is a historically distinct patination technique, exclusive only to Japan, that is responsible for the coloration of copper and its alloys into irogane metals. This method has existed for at least 600 years, but its history may extend over 1200 years due to it being intrinsically linked to the production of certain older metals. There is little to no documentation of the details on niiro, especially the compositions used to bathe the metals, as it was not something meant to be wide-spread, but instead only kept and passed on within Japanese craft circles.

The process of Niiro comprises of heating up the metal to be treated in a special liquid or solution. The piece must first be extremely clean to ensure quality and predictability of the process, and the boiling/broiling of the colour is done with the piece suspended in a copper container. Ultimately, the final colour depends on the duration of the boiling period - with red taking up to 10 hours. After this core patination process, the piece is then washed in cold water before being coated with suki-urushi to seal it in.

Urushi lacquer is made from the sap of the Japanese rhus vernicifera tree. To harvest the sap, a couple of slashes are made in the tree for it to seep out. Once the sap is obtained, it is filtered several times through layers of special paper. The result is a translucent lacquer which color ranges from very light to a dark amber. Urushi, to many especially collectors, is seen as a miraculous substance. Urushi cures naturally through a process of oxidation and polymerization into a material with remarkable properties for a natural substance.

As the urushi lacquer hardens, it absorbs moisture from the air. This makes the lacquered surface perpetually shiny and slick. It also makes it very durable and able to withstand erosion from water, acids, alkalies, alcohol, and changes in temperature, which is the main reason lacquer became an art form to begin with. Over time, urushi will actually become harder and more scratch resistant as the polymerization process continues on even after the initial manufacture.

Suki-Urushi (or clear lacquer) seals the Hamon pattern on the Grand:Akane dial. Sunlight - specifically the UV light - will over time lighten the top suki-urushi layer and make it more translucent, and warmer or colder in shade.