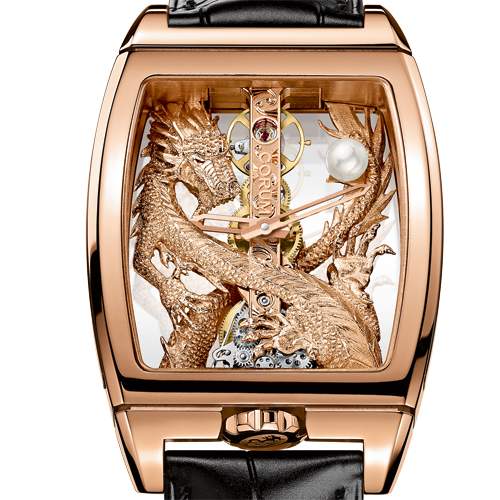 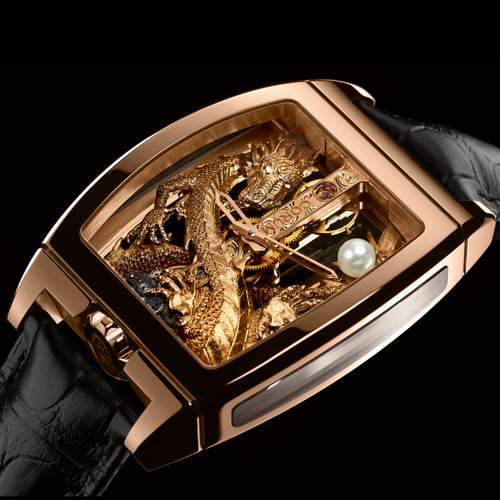 Giving free rein to its formidable creative audacity, Corum orchestrates an encounter between two of the most fascinating figures in their respective universes: the dragon, a mythical creature symbolizing life and power; and Corum’s exclusive linear or ‘baguette’ movement, an authentic contemporary watchmaking legend.

A fantasy creature venerated since the dawn of time, the dragon nurtures the collective imagination of many civilizations. This imperial and majestic figure is often depicted as the guardian of a fabulous treasure. And the fabulous silhouette appearing on the new Golden Bridge Dragon with its daunting claws fully bared does indeed keep fierce watch over a true treasure: the hand-wound CO 113 movement. A worthy descendant of the first ever baguette movement, introduced by Corum in 1980, this mechanical masterpiece embodies both the impressive expertise of the brand from La Chaux-de-Fonds and its insatiable quest for linearity. Built along a vertical axis, it is extended by the crown at 6 o’clock, which is perfectly aligned in order to accentuate this exceptional construction. The remarkably precise Caliber CO 113 beats at the frequency of 4 Hz (28,800 vibrations/hour) and is equipped with a variable-inertia balance ensuring impressive long-term regularity. Visually stunning in each and every detail, it features a red gold mainplate and bridges, including an upper bridge bearing the hand-engraved Corum signature.

A virtuoso in the domain of horological mechanics, Corum demonstrates the same degree of skill in exalting the skills of prodigiously gifted artisans. To breathe life into the dragon, red gold was first poured into a mold to form an initial rough outline. The fascinating engraving work then began. Playing with the irregular thickness of the gold plate, the craftsman patiently sculpted the material by meticulously and accurately plying the burin in order to create striking three-dimensional effects. After more than two weeks of this extraordinary task performed entirely by hand, the dragon was prepared to work its magic, conveyed through countless details. With its mythical silhouette covered with depth-effect tiny scales, the creature wraps itself around the baguette, albeit without actually touching it. The dragon with its flaming head looks ready to breathe its inner fire, while its tail is tipped by a pearl, like a flaming sun. Its impressive claws serve as a reminder that it is a formidable adversary for anyone that might defy its rule.

The fascinating encounter between the mythical creature and the legendary caliber finds a worthy setting in an elegant tonneau-shaped case. The latter is made of 5N 18K red gold and fitted with four sapphire crystals on the front, back and both sides, thus creating a mesmerizing transparency that further enhances the dragon’s three-dimensional perspective effects. The precious and refined Corum Golden Bridge Dragon is also interpreted in two jewelry versions. On the first, the sparkle of 422 round-cut diamonds (approx. 4.46 carats) lights up the red gold case and the folding clasp on the bracelet; while the second features no less than 80 baguette-cut diamonds (approx. 3.9 carats) and 338 round-cut diamonds (approx. 1.83 carats) adorning its 18K white gold exterior.