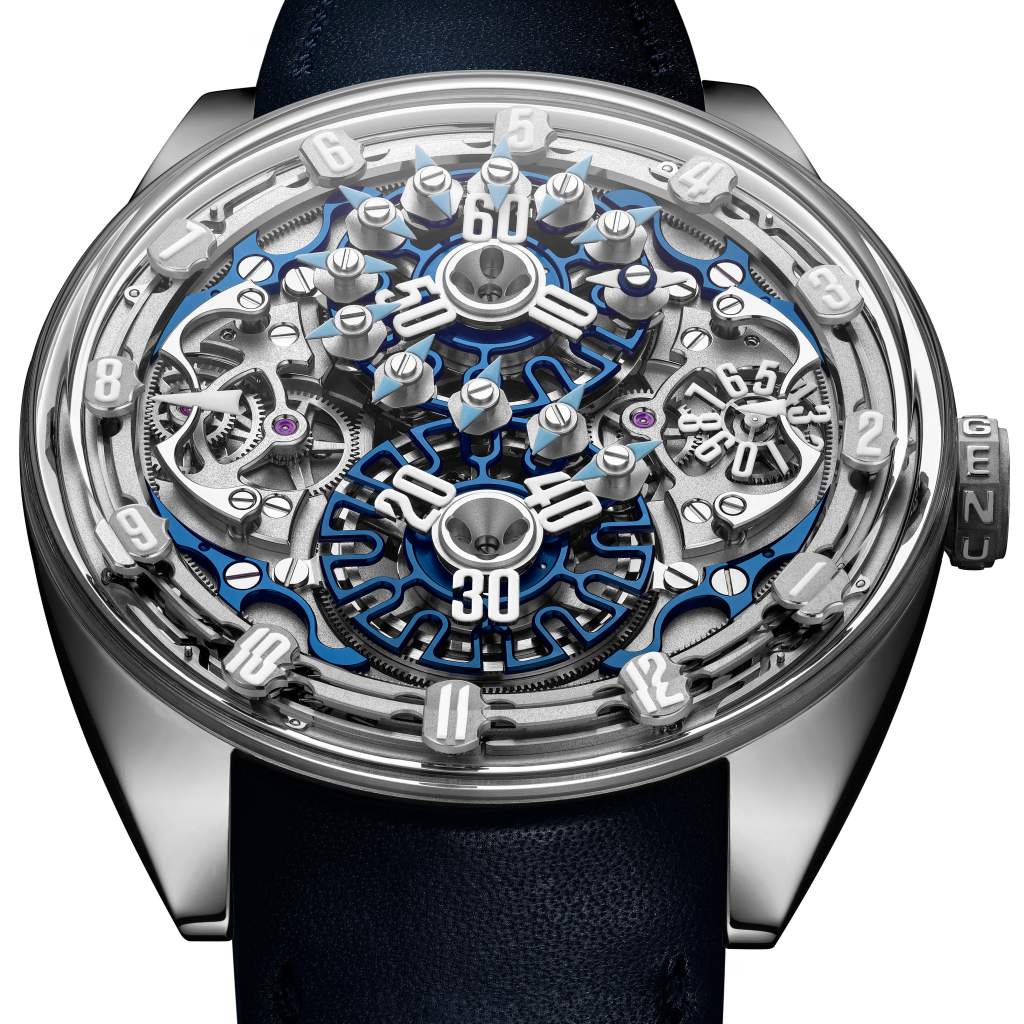 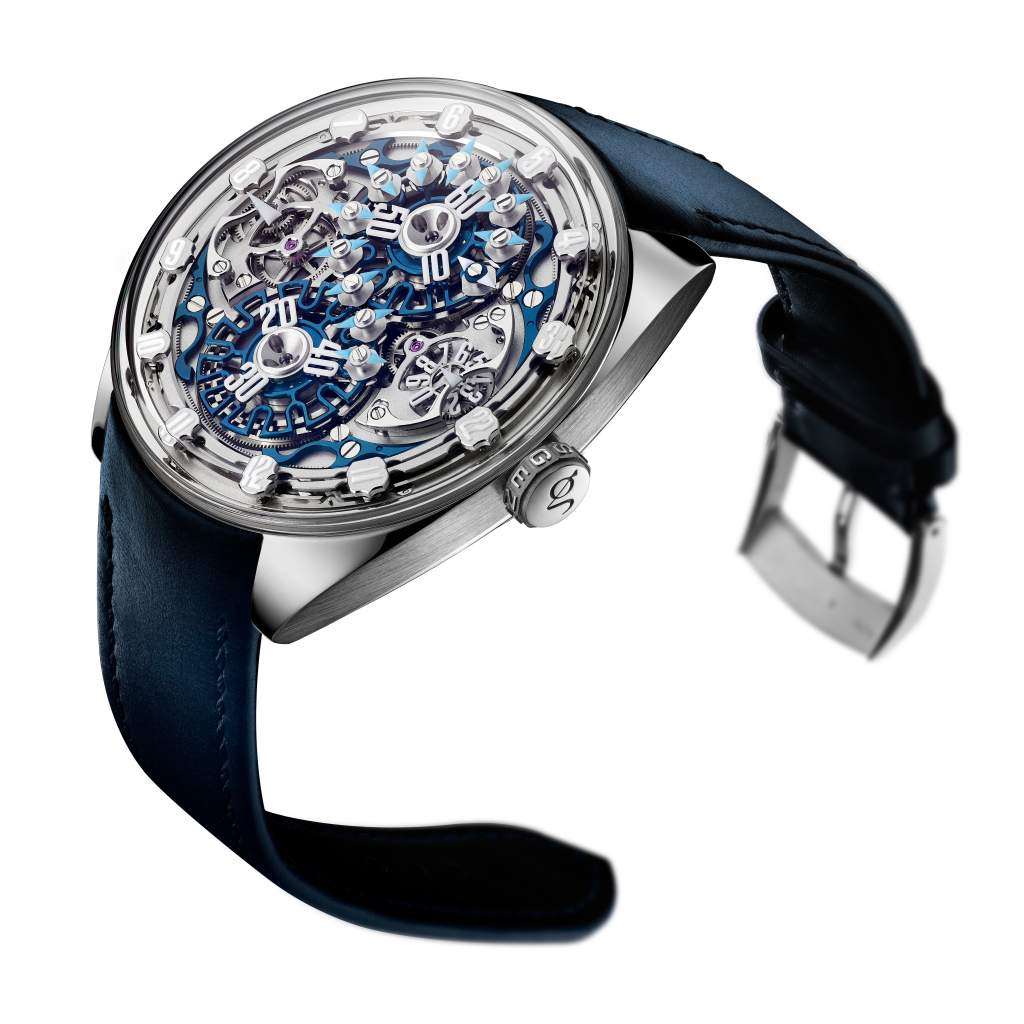 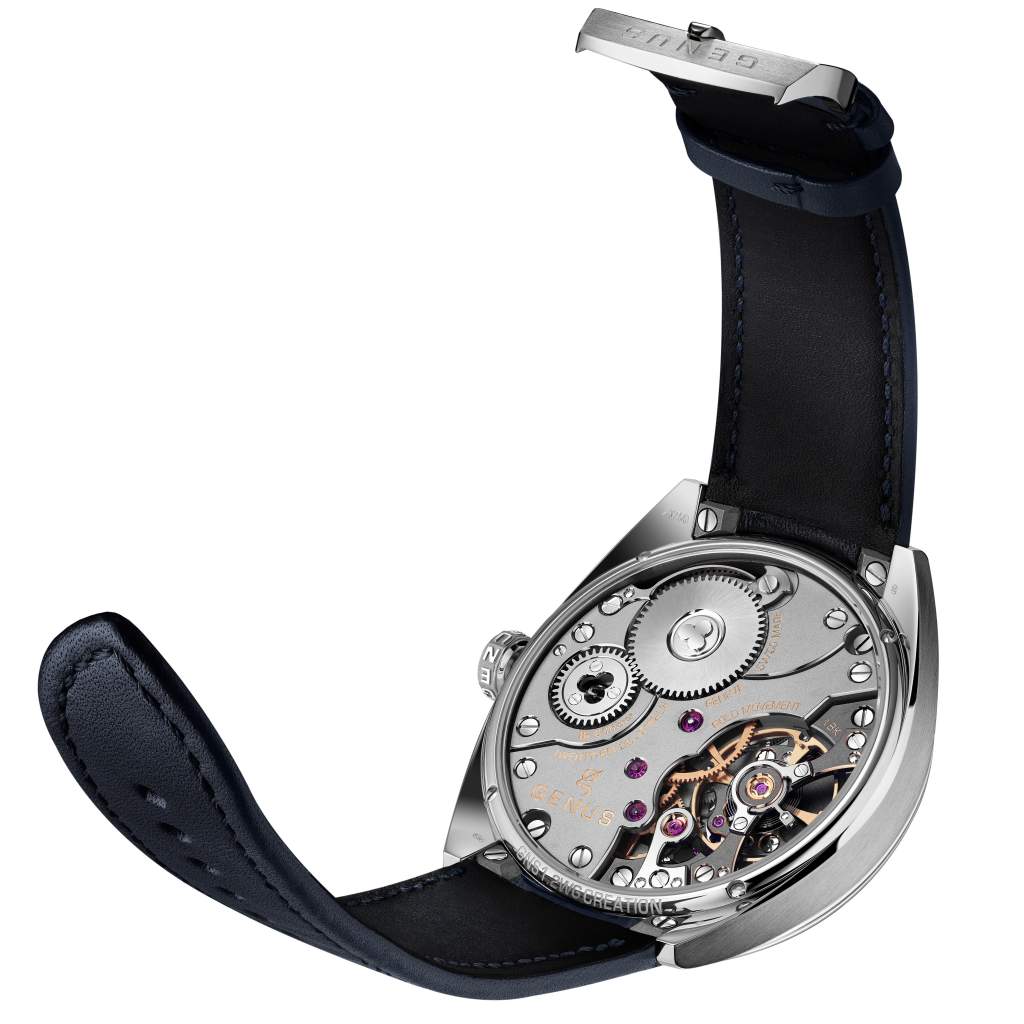 The upcoming 2019 “Grand Prix d'Horlogerie de Genève” offers an opportunity to unveil a watch that marks the birth of the independent Geneva watchmaking brand named by the co-founders, GENUS – in a class of its own – and the advent of a new kind of creative Haute Horlogerie.

For the first time in the world of Fine Watchmaking a mechanical component moves seamlessly from one orbit to another. This exceptional timepiece, whose case, movement and time display complications are manufactured in 18K gold, is the culmination of ten years of research and three years of development.

It’s the story of a fascination with the figure 8, the symbol of infinity, so powerfully represented in the analemma – the path drawn in the sky by the different positions of the sun measured at the same time and from the same place during a calendar year. It’s also a desire to shake-up watchmaking fundamentals, whilst respectfully building on the foundations. Traditional watchmaking hinges on a system of fixed elements driven by gears. GENUS envisions it with the added dimension of motion, with freely moving elements, as if on rails.

With GENUS, you’ll learn to read the time differently. Hours are indicated at 9 o'clock, tens-of-minutes are shown by the lead traveling indicator – named “the Genus” – which moves freely from one central orbit to the other, and the precise minute is read on the rotating dial in the traditional 3 o'clock position.

The tens-of-minutes display is captivating. The lead Genus shows the passing of time in 10-minute increments and is followed by 11 Genera (‘genera’ being the plural of ‘genus’) that progress radially along the 8-shaped orbital path, like a kinetic sculpture. As the lead Genus traces its path around the two distinct foci, a rose window is formed by the Genera every 15 and 45 minutes, alternating between the upper and lower tracks of the 8. As time passes, this gives the watch a fascinating and ever-changing face. To know the exact time, simply note the hour shown and add the precise minute to the tens-of-minutes indicated by the Genus.

The timepiece is powered by a hand-wound manufacture calibre in 18K gold and features a variable inertia balance wheel. The main base plate is in two parts and separates energy regulation and distribution, from transmission

All movement components are hand-finished in keeping with the exacting criteria of Haute Horlogerie and feature a hand-bevelled main plate and bridges, circular-grained and bevelled wheels, with most steel components that are black-polished (poli noir finish) and bevelled. All flank drawing is done by hand. The 18K gold display module has the same exceptional degree of finishing. The combination of a generous dial aperture and box-domed, flush-mounted sapphire crystal frees the view on the module’s architecture and its complexity.

Truly a new genus in the world of watchmaking. Its watchword: Freedom.

Watchmaker, instructor, entrepreneur, and co-founder of GENUS, Sébastien Billières successfully leverages an expertise in Fine Watchmaking acquired while working with some of the greatest in the field.

A proud father of three, he is the son of a watchmaker who devoted 35 years of his career to Rolex. Barely a few days after obtaining his CFC as a watchmaker in 1999, Sébastien Billières shifts into high gear at the workshop of Roger Dubuis, which had approximately ten employees at the time, and collaborates directly with the master himself.

Eager for experience, he enters the orbit of other strong personalities, like Felix Baumgartner in the early years of Urwerk. Sébastien Billières then becomes part of the Opus V project team at Harry Winston, in charge of fine-tuning alongside Felix (prototyping), and testing and parts production. Until today he remains in charge of after-sales service operations for Harry Winston.

There is no mistaking the signs of destiny. When Sébastien Billières decides to set up on his own, the workbench he rents from Svend Andersen turns out to have been previously occupied by none other than Felix Baumgartner, his friend and mentor, and Franck Muller.

The production of tourbillons, a specialization in automatons – just two of the fields in which the budding watchmaker develops a wide range of skills that don’t go unnoticed for long.

In 2006, Billières is approached by IFAGE, the Foundation for Adult Education in Geneva, to broaden the scope of its watchmaking curriculum. He is the Chairman of the departments he created: Modular Training in Watchmaking and Training in Industrial Quality, and still teaches there.

In 2007, he co-founds a company to develop new mechanisms and complications for high watchmaking “Maisons”. It’s a success. Sébastien Billières then sets up shop on his own, and GMTI soon becomes one of the region’s leading subcontractors to the watchmaking industry with state-of-the-art facilities specialized in the manufacture and assembly of “Poinçon de Genève” calibers. The team at GMTI is currently twenty-strong.

Throughout his watchmaking journey, Sébastien Billières’ guiding principle is and remains, "We live in an infinite universe, limited only by our beliefs."

This free spirit dreams of an innovative, and continuously evolving concept of watchmaking that ventures into unexplored territory. His first creation is entered in the 2019 “Grand Prix d'Horlogerie de Genève” competition and marks the unveiling of the exciting and independent Fine Watchmaking brand newly co-founded with his business partner Catherine Henry: GENUS.