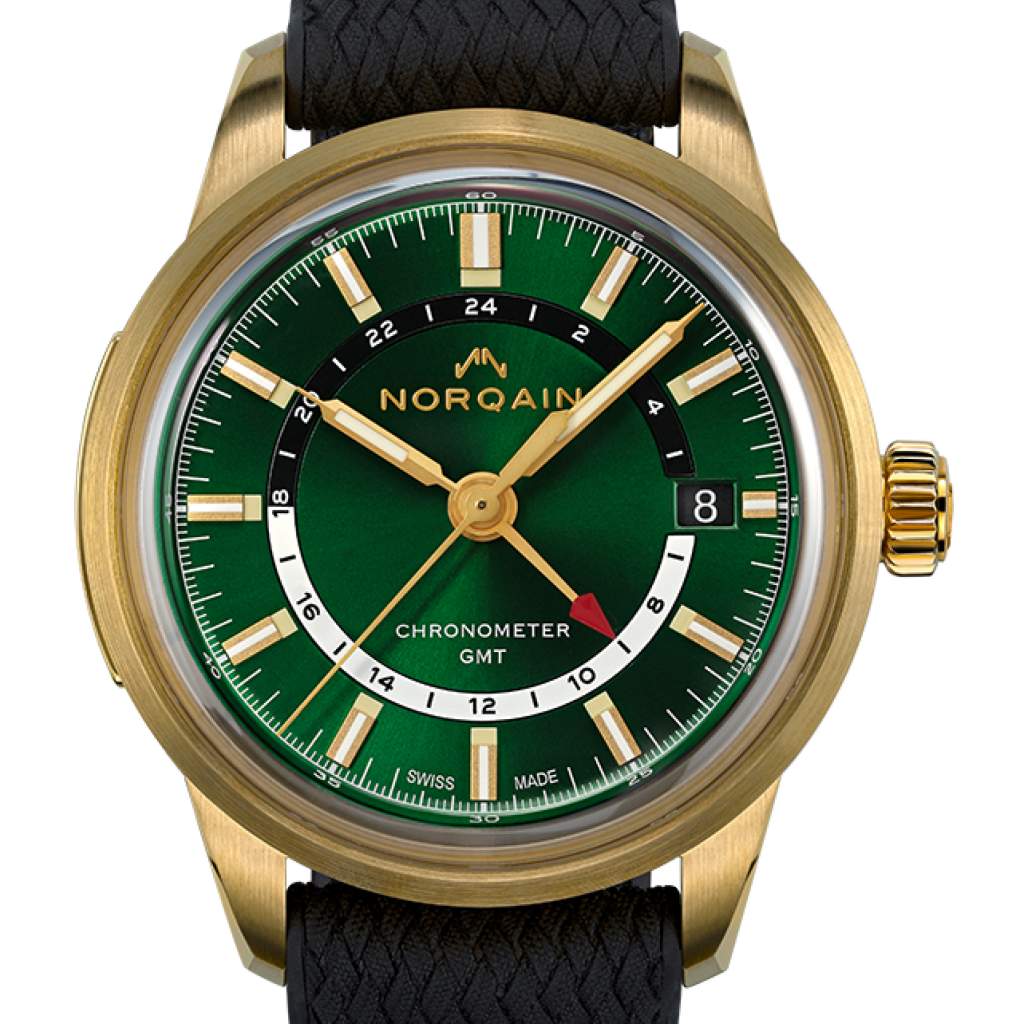 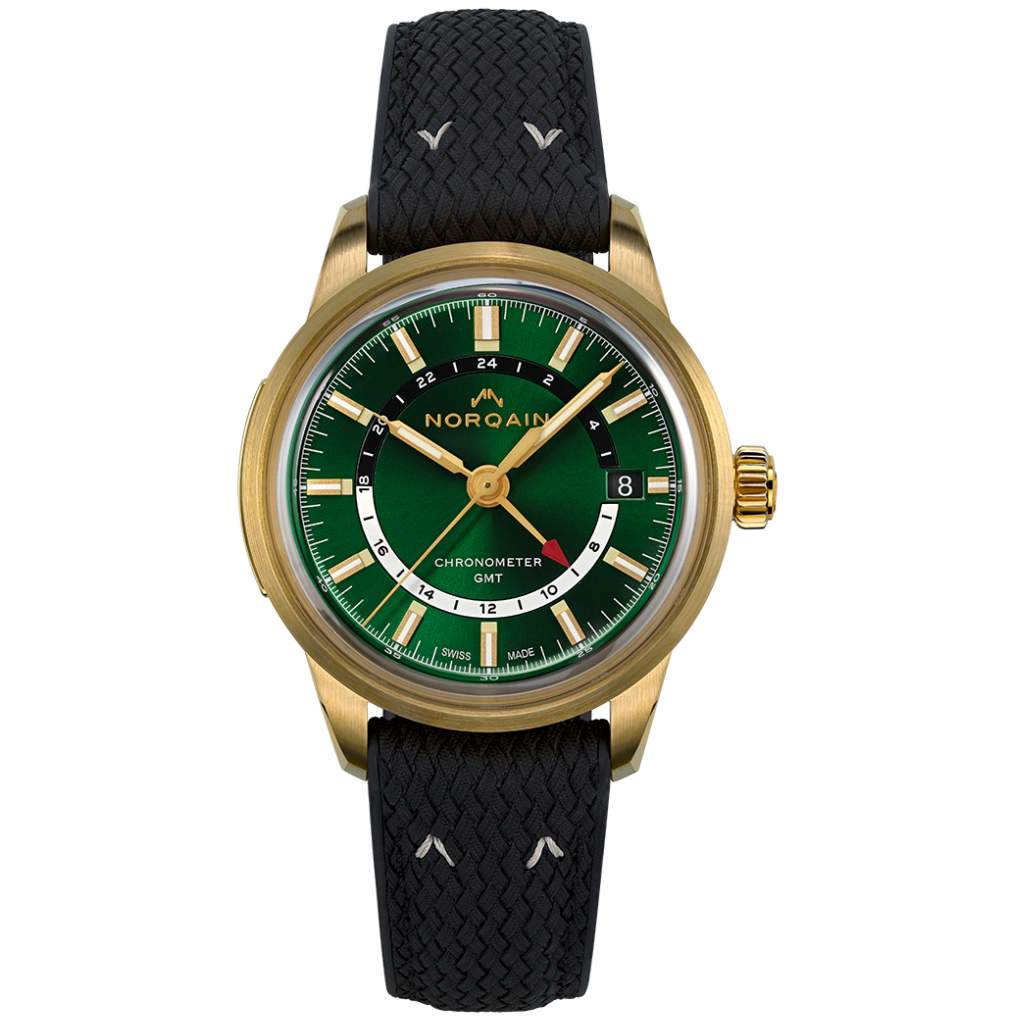 With the Freedom 60 GMT watches it launched in 2020, Swiss watchmaker NORQAIN generated an enthusiastic response with models in bold bronze as well as in the stylish stainless steel. And now, two new Freedom 60 GMT releases are set to attract a new wave of adventurous souls to the fiercely independent brand. Like all Freedom 60 GMTs, they are powered by the brand’s cutting-edge Manufacture Calibre NN20/2, designed and created in cooperation with mechanical movement manufacturer, Kenissi.

NORQAIN has announced the launch of two eye-catching new Freedom 60 GMT watches. The entire Freedom 60 collection, including these new GMT models, was designed for trailblazers who, like everyone at NORQAIN, enjoy the freedom they experience when they take the road less travelled.

The Freedom 60 GMT Collection watches have already been an important part of NORQAIN’S story. At once timeless and timely, they blend the spirit of classic 60s watch design with a resolutely contemporary aesthetic: their compelling dials are protected by a scratch-resistant sapphire glass and they are attractively proportioned, with 40mm cases and a lug-to-lug length of 49mm.

Each Freedom 60 GMT watch is powered by a jumping-hour GMT Manufacture Calibre NN20/2 created in collaboration with Swiss mechanical movement manufacturer Kenissi. With the innovative jumpinghour GMT feature, a wearer can instantly adjust the local date and hour to the time in a new time-zone without stopping the watch.

With a 70-hour power reserve, the Freedom 60 GMT is truly weekend proof: you could take it off on a Friday evening (not that you would want to) and on Monday morning, it will still be performing perfectly, ready for the new week. The highly complex calibre exceeds all industry standards and is a COSC-certified chronometer. The automatic-winding movement has been constructed with an innovative jumping hour functionality that makes it easy to adapt to seasonal time changes and different time zones without losing a second.

A glance at the movement through the transparent caseback reveals its exclusivity. The bridge is engraved with NORQAIN’s core values, “Adventure – Freedom – Independence”, and the oscillating weight is decorated with the golden NORQAIN “double-N” logo, which symbolises the Swiss Alps.

Making its own bold style statement, the Freedom 60 GMT Forest Green Limited Edition is delivered in a case crafted from bronze and presented on a unique Perlon rubber strap, which was developed and produced in Switzerland by BIWI, an industry leader that has established an international reputation for its innovative, vegan-certified products. Like all Freedom 60 GMT timepieces, it features a GMT scale on a centre ring and in this case, there is a white half-ring from 6:00 (6 am) to 18:00 (6 pm) to mark the daytime hours and a black half-ring from 18:00 (6 pm) to 6:00 (6 am) that keeps track of the time at night. The GMT ring is in beautifully stark relief from the forest green dial. Its central GMT hand has a red tip that points to the hour on the 24-hour centre ring scale, tracking the time in another time zone is effortless.

The 40mm satin-polished bronze case with polished details has a slightly yellowish tinge when it is delivered but will become darker as it oxidizes over time. It is crafted from a bronze silicon-aluminium alloy that has proven itself in marine applications because it is particularly resistant to corrosion and wear, making it ideal for a watch case. The bezel and the NORQAIN Plate, as well as the hand-applied indexes and faceted hands, which are coated with “Old Radium” Superluminova, are also bronze. The steel caseback is treated with bronze PVD.

This watch, with its bronze case and forest green dial, is sure to stand out in any crowd. It has been released in an edition limited to 300 pieces.

In an affectionate nod to NORQAIN’s identity, its Norlando leather straps as well as the Perlon and Croco-style rubber straps are distinguished by their characteristic Swiss Alps-inspired stitching near the lugs.

The launch of its Manufacture Calibres in February of 2020 marked an impressive milestone for the family-owned brand. With its Manufacture Calibres NN20/1 and NN20/2, NORQAIN quickly made a name for itself among Swiss watchmakers and demonstrated its commitment to long-term independence by offering customers timekeeping quality that exceeds industry standards. Underscoring the quality of these calibres is NORQAIN’s four-year international warranty, which can be extended to five years for owners who join the NORQAINER Club within one month of their purchase. From the day they were launched, the Freedom 60 models have been a thrilling part of the narrative as they were among the first watches in NORQAIN’s collection to be fitted with these high-performance calibres. With them, NORQAIN’s next-level independence was unlocked, and with these new Freedom 60 GMT models, this compelling contemporary Swiss watchmaking story continues.

Founded in 2018, NORQAIN is a fully independent, family-owned Swiss watch company located in Nidau (Biel/Bienne) in the heart of the Swiss watch industry. Driven by the excitement that comes with exploring the road less travelled, NORQAIN has three collections – Adventure, Freedom and Independence – that are exclusively equipped with mechanical automatic movements. In 2020, it introduced two Manufacture Calibres produced in collaboration with movement manufacturer, Kenissi. The company is led by CEO and founder Ben Küffer, his father Marc Küffer, NHL Stanley Cup winner and Swiss hockey legend Mark Streit, and Ted Schneider. NORQAIN is a proud partner of the National Hockey League Players’ Association (NHLPA) and the Official Timekeeper of the Spengler Cup Davos. In July 2020, the brand organised its second NORQAINER Challenge together with Swiss running brand On. Available throughout Europe, Japan and the US, NORQAIN has an expansive network of retail partners that includes Bucherer and Kirchhofer in Switzerland; Wempe in Germany; Watches of Switzerland in the UK; Westime, Tourneau and Govberg in the USA; L’ORO in Canada; Ahmed Seddiqi & Sons in Dubai; and over 30 points of sale in Japan.