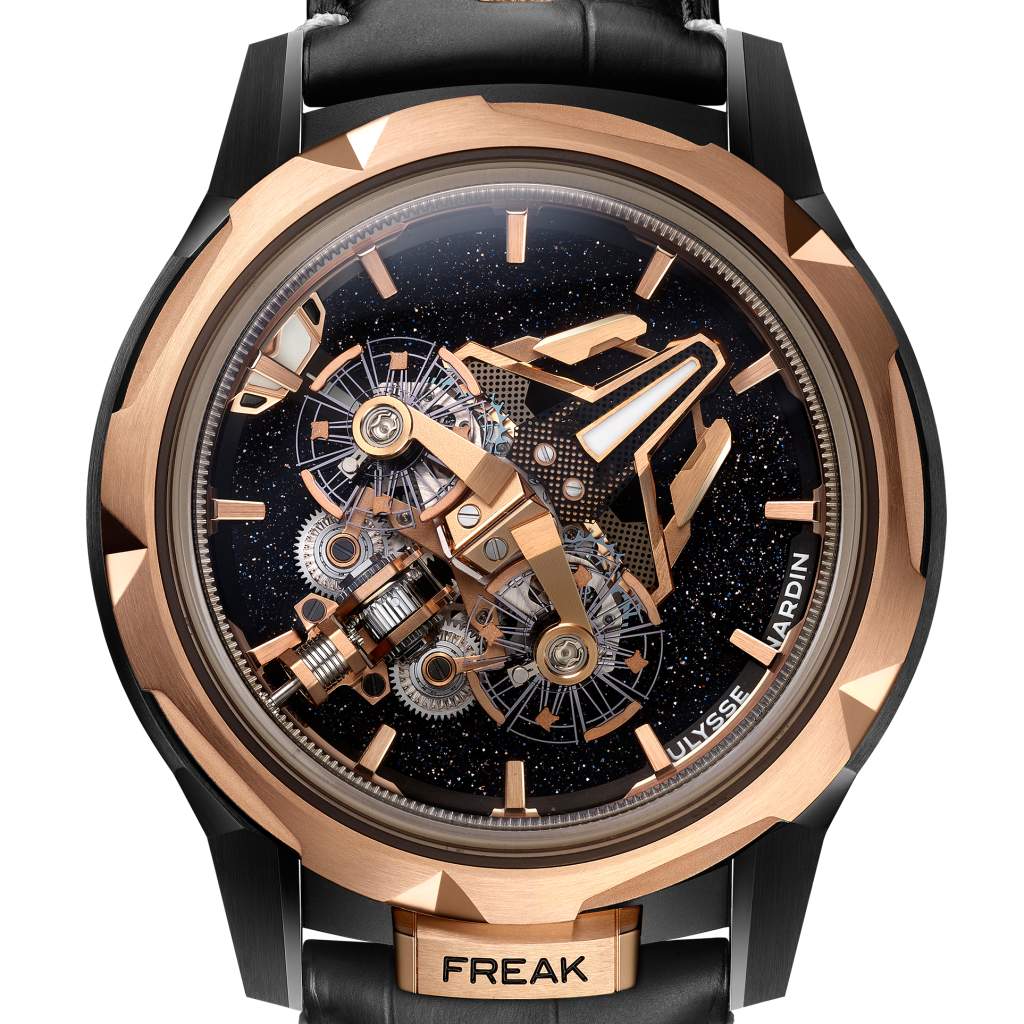 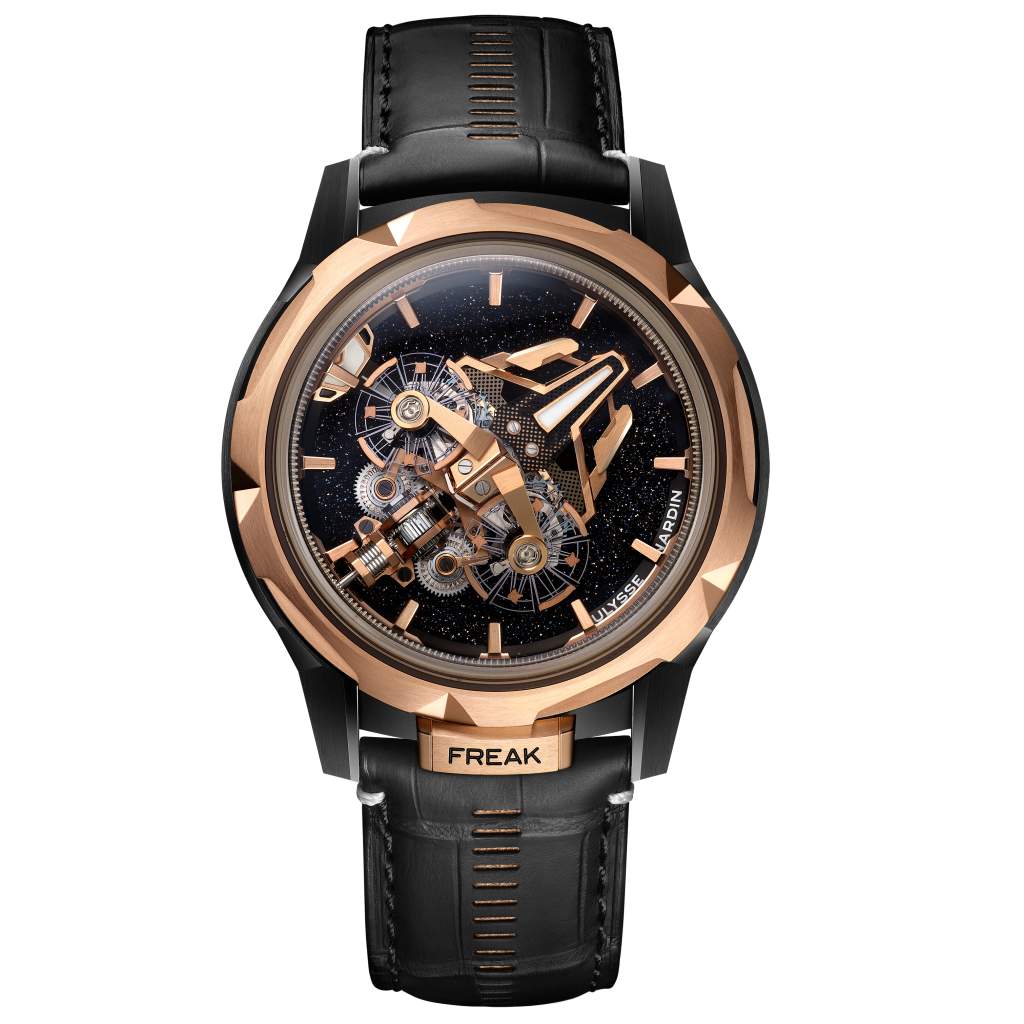 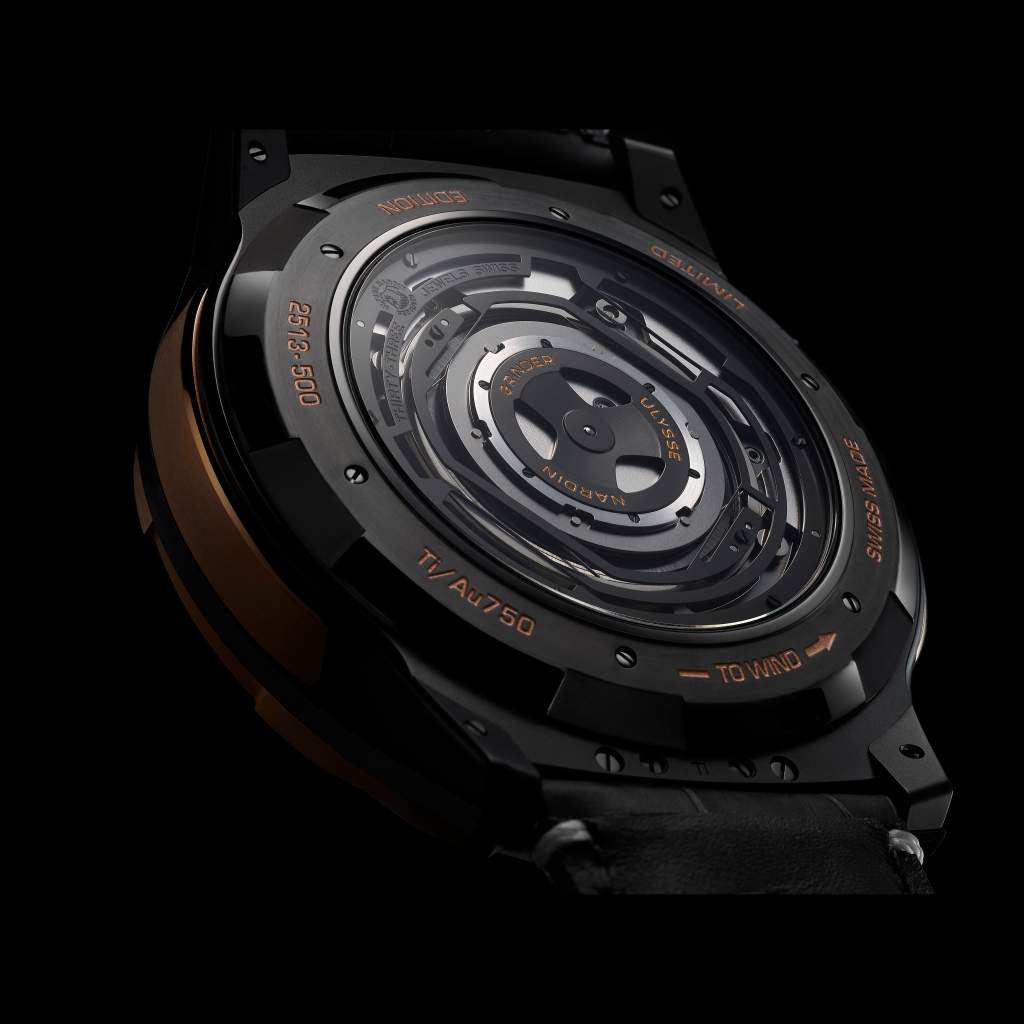 FREAK: /friːk/ noun – a superwatch unlike anything anyone had seen before: mechanically sophisticated, visually arresting, unapologetically exotic.

The first FREAK, launched in 2001, revolutionized contemporary watchmaking. The latest in this saga, the FREAK S, raises the bar higher.

True to the FREAK collection principles, the micromechanical machinery featured in the Freak S is a carousel, with no hands, no dial, and no crown. The Freak S indicates the time thanks to the rotation of its movement. Two bridges rotate around its center. They respectively indicate the hours and minutes. An arrow shows the hours while the nose cone of the rocket, which bears two balance-wheels in silicium and two escapements in DiamonSil, indicates the minutes.

Whereas in traditional tourbillons the balance wheel makes one rotation per minute within a cage, in the Freak S, it’s the whole movement – including its regulating organ – that makes a complete turn on itself in one hour. The Freak S’ time is set by rotating the bezel in a clockwise or counterclockwise direction.

In addition, the Freak S incorporates the following 2022 innovations: a double oscillator in Silicium and a double escapement in DiamonSil, a vertical differential, a “Grinder” automatic winding system (twice as efficient as a traditional winding system) and a new case inspired by the first Freak of 2001, with a construction enabling a combination of different materials such as ceramic, titanium and gold.

A DOUBLE OSCILLATOR AND A DIFFERENTIAL

The three-dimensional effect characterizing the Freak collection is pushed to the maximum in this Freak S. This effect is created thanks to the double inclined oscillator: positioned on distinct planes inclined at 20° one from another, the two XXL silicium balance-wheels (frequency of 2.5 Hz each) are linked by a differential and enable an improved regulation of the movement’s running rate. A bridge in rose gold in the form of a rocket’s wing reinforces their scenic dimension.

After having been the first to use silicium in the very first Freak watch in 2001, here Ulysse Nardin is showcasing an innovative pioneering surface treatment, a combination of silicium and synthetic diamond: DiamonSIL (patented in 2009). The silicium components of the escapement of the Freak S have been coated with a layer of artificial diamond which increases its resistance to magnetism and optimizes its performance and its resistance to abrasion and to the several million impacts per year on the watch.

The “Grinder” automatic winding integrated in the Freak S is twice as efficient as a classical automatic winding system since its energy transmission is twice as efficient as that of existing systems because it uses the smallest of wrist movements. To achieve this, the oscillating weight is connected to a frame carrying four blades, which gives the self-winding system twice the angular stroke. A flexible guiding mechanism considerably limits friction. In addition, the Grinder winding system makes it possible to integrate a double oscillator, allowing an improved regulation of the movement’s running rate.

The Freak S has a power reserve of 72 hours and integrates a black aventurine disk with sparkling golden particles that turns beneath the markers and gives it the sparkle of a starry night. The 45mm case is a combination of black ceramic, titanium with black DLC, 5N rose gold, and is water resistant to 30 meters. This timepiece is available on an alligator strap decorated with a Sport cut-out in rose gold colour and fitted with a self-folding clasp system in titanium with black DLC using a new patented triple-folding system that operates in synchronized fashion (SYNC). The Freak S is a limited edition of 75 pieces and is priced at 130’000 CHF.