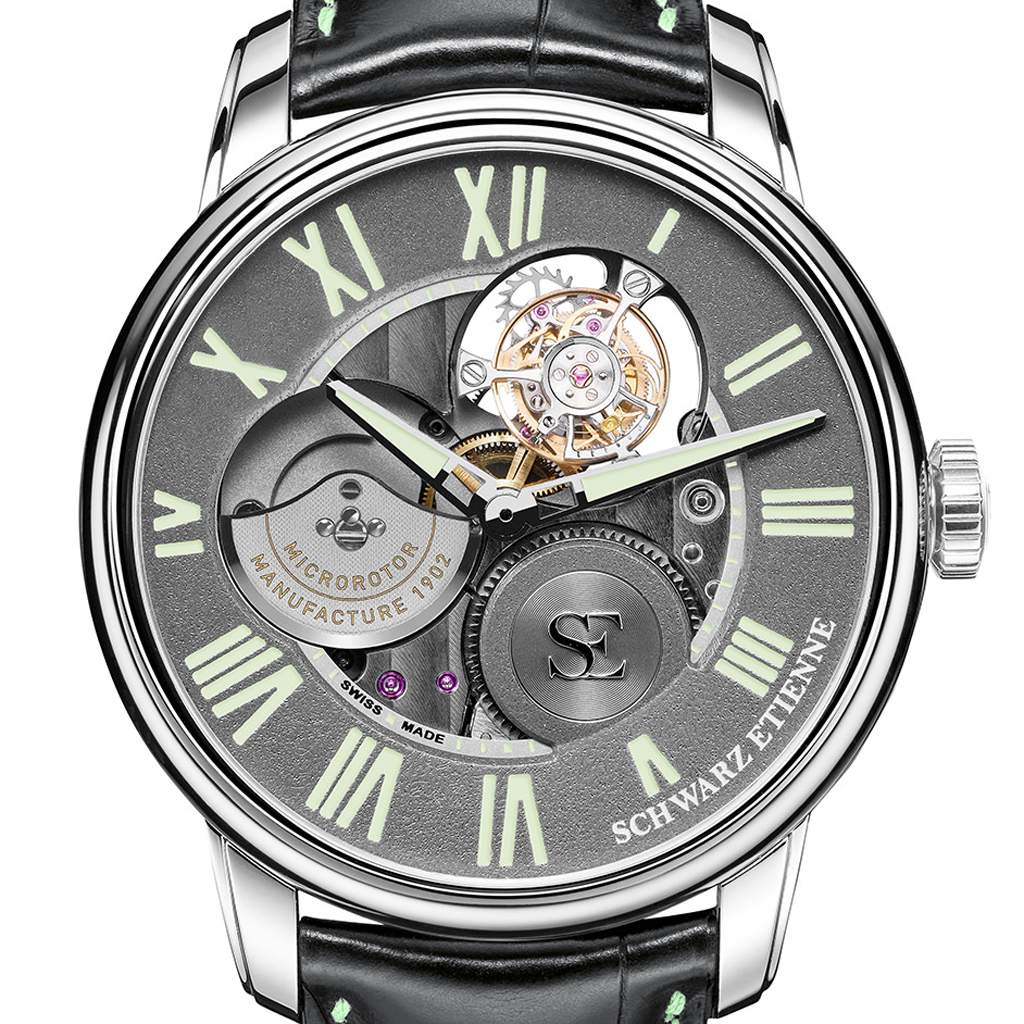 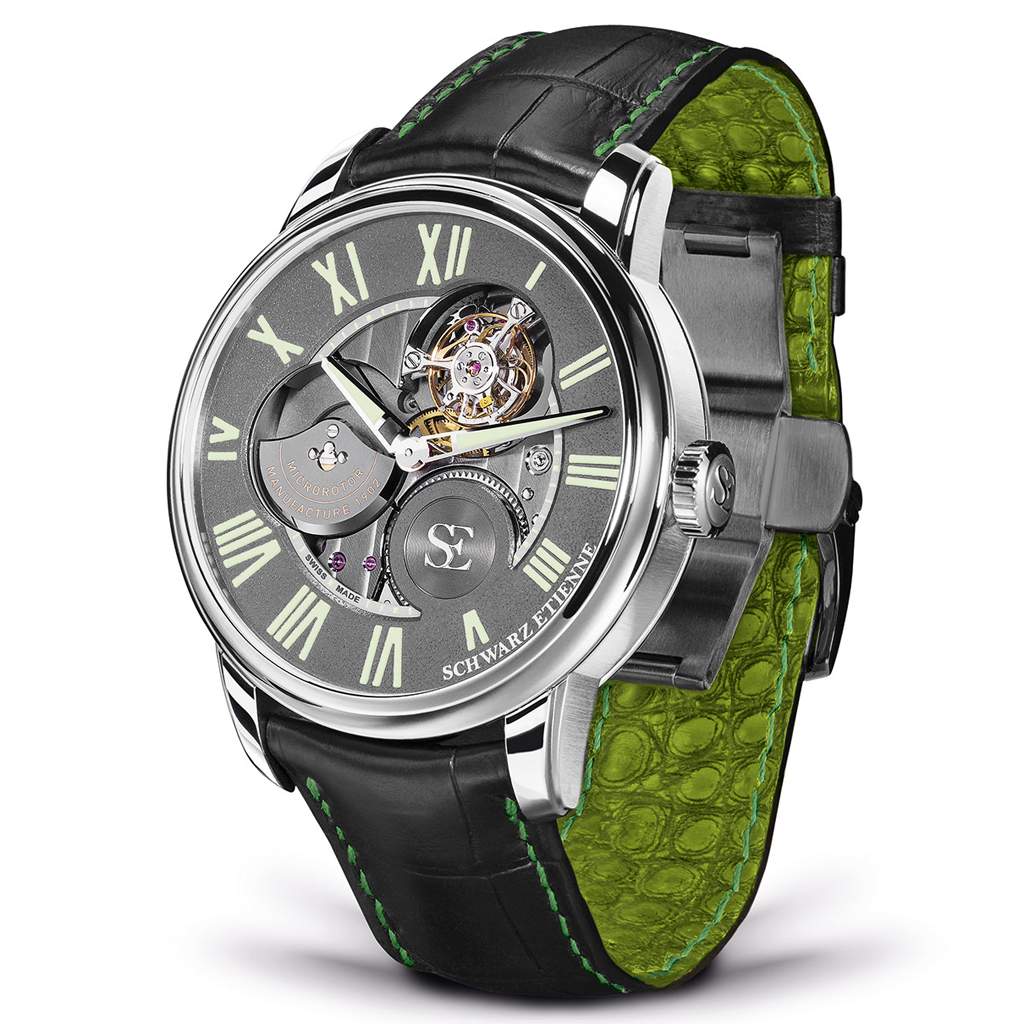 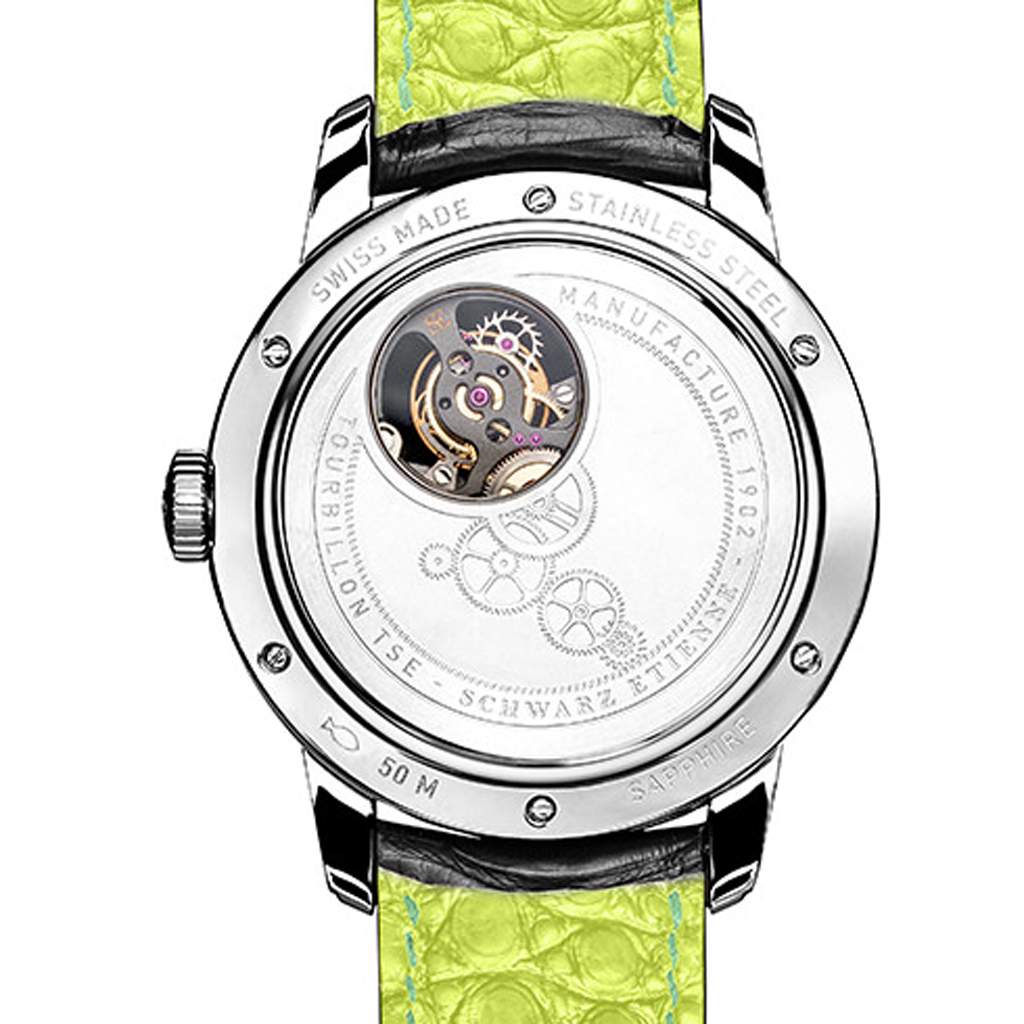 For in the mountains the elements are unpredictable. Storm, wind, snow, sometimes a blazing sun – such are the forces humans must endure. And like the elements, time lays down the law on the existence of living beings. However, those laws, which are not carved in stone, do not dictate. Thus, the watchmakers of the Schwarz Etienne manufacture decided to take back power, to confront the raging elements to affirm their mastery of time.

From the mountains of Neuchâtel have blown the winds of inspiration deep into the imagination of passionate watchmakers willing to challenge the laws of the universe to attain a boundless creative genius. With this, the manufacture Schwarz Etienne perpetuates superior craftsmanship.

A dive into the depths

With mechanical movements with automatic winding Irreversible tourbillons beating in rose or grey gold, or steel cases the Tourbillons La Chaux-de-Fonds TSE at once emphasize the watchmakers’ careful design and invaluable work.

The flying tourbillon, raised and highlighted at 1 o’clock, affords a privileged view of this complication by giving it a sense of depth. At 9 o’clock, the off-centred micro rotor bestows its complexity upon this exceptional and audacious timepiece, in a most ingenious mechanical combination.

The grey or black dials have a black-grained flange, a recognisable mark of Schwarz Etienne. Designed to be readable and structured, these dials are in perfect harmony with the motors that drive them. The three essential elements of this calibre – the barrel, the micro rotor and the tourbillon – are highlighted. Unequalled, this assembly by Schwarz Etienne confers uniqueness to these timepieces, a rare simplicity paying homage to the origins.

The gold models have applique Roman numeral hour markers while the steel models’ markers are cut out, and coated with green Super-LumiNova.

Handcrafted alligator straps, available in black, grey or brown to perfectly match the shades of the dials, are enlivened by the vivid colours of their linings.

With the Tourbillons La Chaux-de-Fonds TSE, the Schwarz Etienne manufacture invites to a journey without borders or limits. These masters of the finest complications and the ultimate guardians of watchmaking genius face storms of sand, fire or hail to meet with virtuosity the challenge of the perfect mastery of time.

The TSE calibre housed within the Tourbillon La Chaux-de-Fonds models received a new life in undertaking its revolution. It turned over. It became Irreversible.

The future became the present, and today reached its culmination: the TSE movement is the first with a flying tourbillon and an irreversible micro rotor from Schwarz Etienne. An exceptional innovation.

The flying tourbillon, positioned at 1 o’clock, floats at the top of the dial in any airy lightness. The decentred micro rotor at 9 o’clock, a rare complication as it requires a subtle balance of the forces, allows for an increased visibility of the mechanism and provides a deep view into the intricacies of the movement. Fleeting moments in its heart.

The TSE Tourbillon has a three-and-a-half day power reserve. This rare autonomy is designed to guarantee the stability of the precision in the long term.

Schwarz Etienne is a rare manufacture that can pride itself on being entirely autonomous in the supply of its range, this especially due to its sister company and partner E2O, which is specialised in the production of complete kits.

The bringing to market of this entirely manufactured in-house calibre further reinforces the position of Schwarz Etienne among the major players in Haute Horlogerie.

Drawn from the La Chaux-de-Fonds collection, watch metropolis par excellence, these TSE Tourbillons are the embodiment of innovative expertise, which continuously develops, and that dares to brave the elements, powered by an unquenchable passion for watchmaking. For over 100 years.