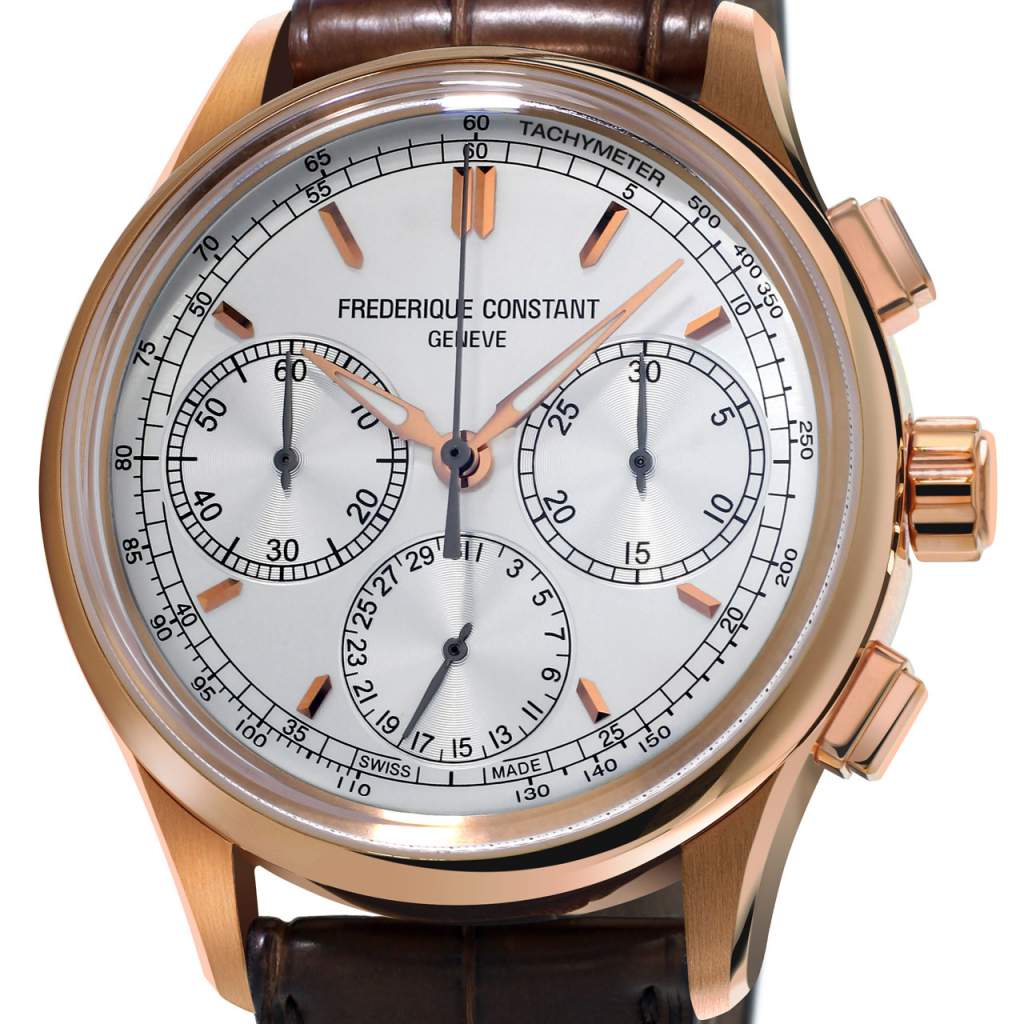 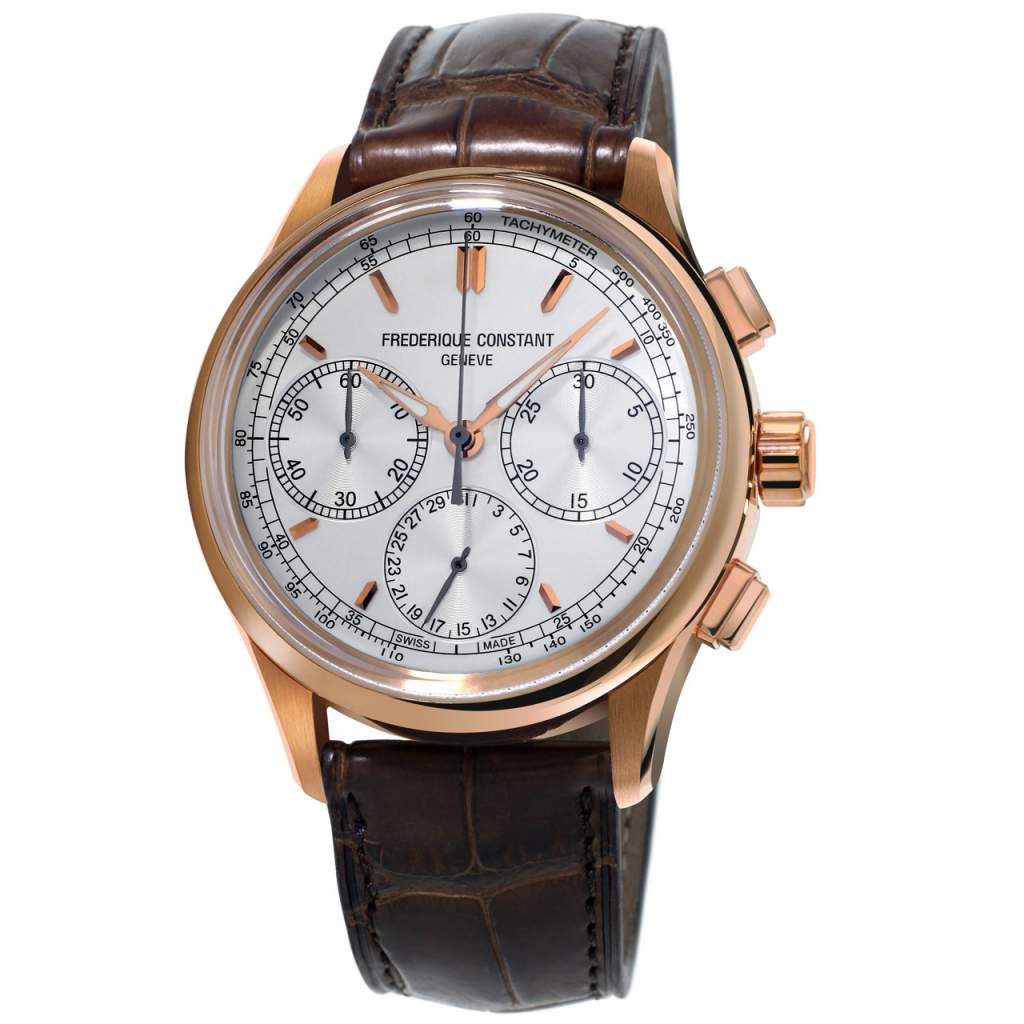 This FC-760 complication is inspired by 1930’s Flyback Chronographs and a desire to go beyond a regular chronograph construction. Whereas the regular chronograph function is used as a stopwatch to measure time during a specific elapsed interval, with a Flyback, a user is able to operate the chronograph without resetting it to zero every time. With the flyback, the chronograph’s hand can be stopped, reset to zero, and restarted with one push of a button. This function is essential for timing an elapsed interval of events during races.

An unmistakable characteristic of high-quality chronographs is a column wheel rotating on bearings to control the three “start, stop and reset” functions. In conventional mechanisms, this component has several columns. In contrast, the caliber FC-760 has no standard-type column wheel, but a star-shaped one. Together with the operating lever, which is controlled by the start/stop push-piece, this component is responsible for the exceptionally smooth operation of the mechanism.

Frederique Constant’s team of watch experts have relentlessly worked to take Frederique Constant innovative ambition to groundbreaking new heights with the launch of one of the most difficult watchmaking complications; due in part by the specific expertise needed to create it as well as the required skilled watchmakers to assemble it. After a long process involving drawing, designing, prototyping, and ultimately creating the timepiece, they defied all odds struggling with the necessary geometry, forces and meticulous adjustments to create the new reliable in-house FC-760 movement.

For the new FC-760, Frederique Constant decided to adopt a modular construction. This powerful movement, comprising 233 components (of which only 96 components are dedicated to the Flyback module) with a rotor operating in both directions and a 38-hour power reserve. The ingenious construction of the chronograph mechanism is apparent from the fact that Frederique Constant was able to create it from only 96 parts. Critically minded contemporaries may suggest that such a small number of parts must imply loss of quality. This is by no means the case. On the contrary, releasing the chronograph push-piece above the crown for the first time demonstrates how thoroughly the functional relationships have been thought through. Protection against errors of manipulation is clearly perceptible in the resistance felt on starting. Nevertheless, the pressing action is extremely smooth. Of course, the same is true of the subsequent stopping and resetting operations.

The absolutely essential part in all chronographs is the clutch. Its function is to establish the connection between the power source that is the watch movement, and the gearing, or under-dial work, when required. To achieve this end, watchmakers are acquainted with three different designs: the classic horizontal wheel coupling, the oscillating pinion, also traditional, and lastly the modern vertical friction clutch. Symbolic of the ingenuity of the FC-760's designers is a new type of swiveling component with two toothed pinions. When the button is pressed, it connects the two “stories” together. At the lower level, in the watch movement proper, it takes up the rotation of the center seconds and conveys this, via the corresponding upper component, to the actuating mechanism to turn the chronograph hands. At the same time, the lower central seconds also drives the seconds hand at 9 o'clock, which turns continuously in unison. The rotations of the chronograph hand are “recorded” by the 30-minute counter at 3 o'clock.

Repeating pressing of the start/stop push-piece causes slight pivoting of the clutch lever. The chronograph stops. At the same moment, for perfect legibility, a small locking lever ensures that the two stopping hands pause exactly at the last position chosen. If desired, this stop operation can be repeated as often as wished with the upper push-piece. The chronograph will not be reset to zero until the push-piece at 4 o'clock is activated.

Pressing the push-piece just once starts the timer again from zero. In this case, the push-piece at 4 o'clock and its associated mechanism cause three tasks to be performed very quickly one after the other: first, the clutch is disengaged; secondly, the chronograph is reset to zero by means of the single-piece hammer, whose sloping surfaces turn the two zero reset hearts so that the hands position themselves vertically again; and thirdly, the clutch engages once more as soon as the push-piece is released. The highly complex sequence of movements involved in this case proceeds directly from the push-piece to the clutch lever. This instant type of flyback is another instance of the unique details of construction of the new caliber FC-760.

And last, but not least noteworthy, are the carefully designed shape and the mode of attachment, not by a force-fit method, of the chronograph module to the basic watch movement. It achieves a reliable and, above all, energy-saving connection between the two mechanisms, both of them produced in-house.