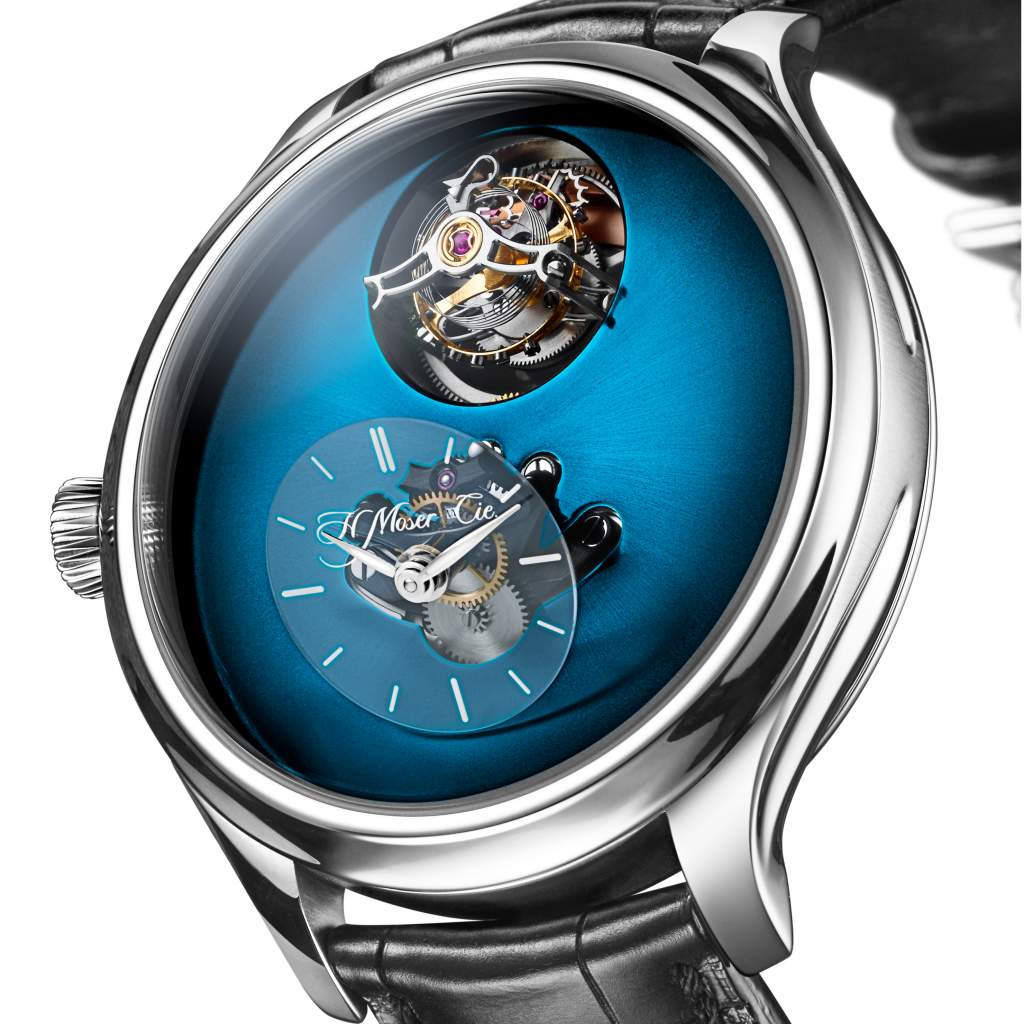 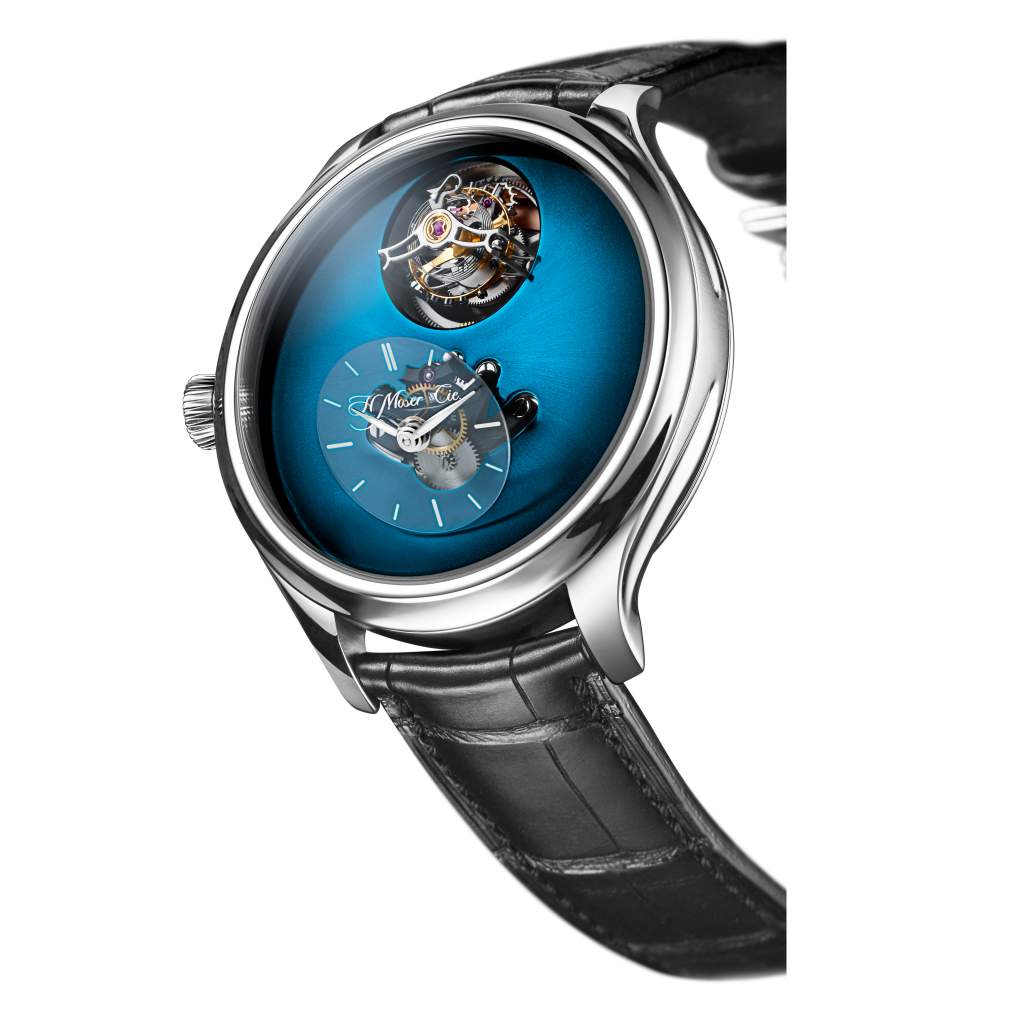 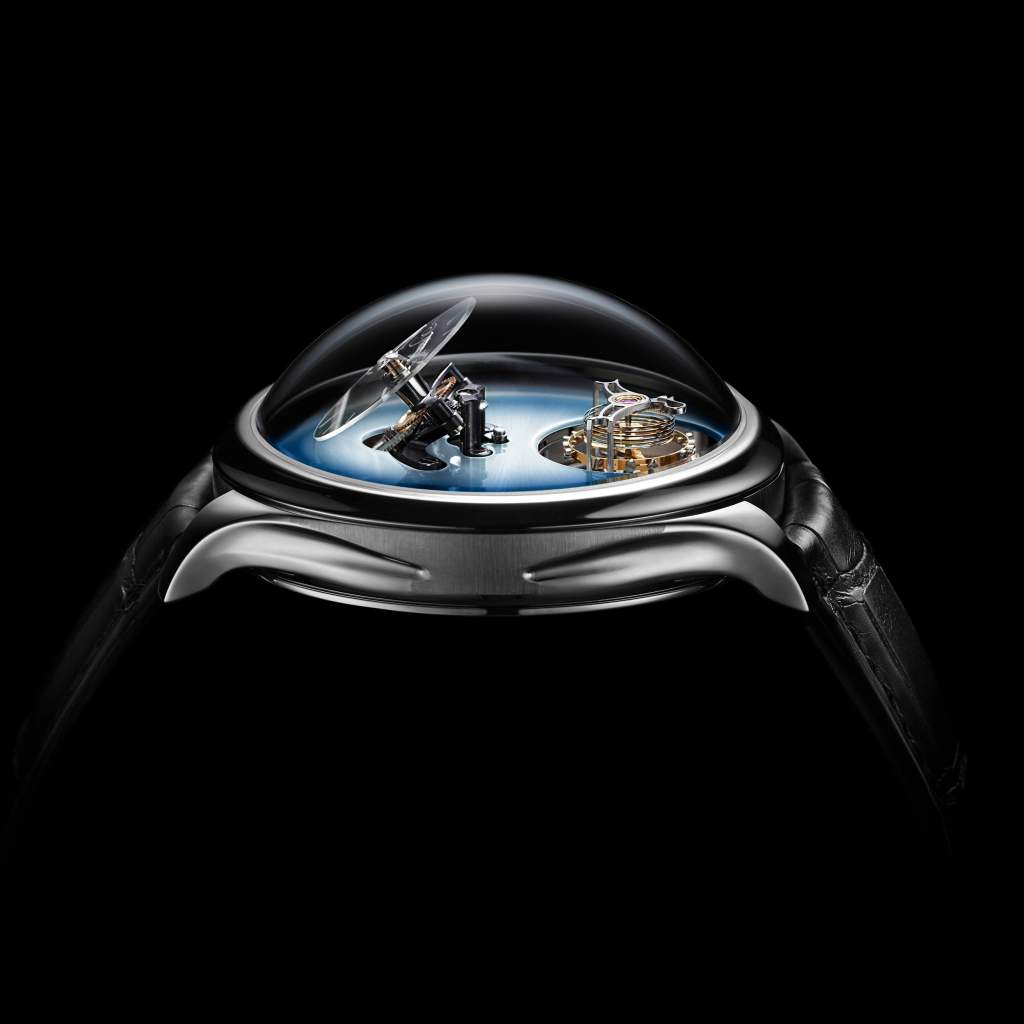 For its Endeavour Cylindrical Tourbillon, H. Moser & Cie. has adopted features from MB&F machines, such as the concept of three-dimensional movements, a strong element of the Geneva Maison’s identity, protected by a sapphire dome. H. Moser & Cie. is emphasizing a one-minute flying tourbillon that rises above the main dial through a ventricular opening appearing at 12 o’clock. Benefiting from the expertise of its sister company Precision Engineering AG, H. Moser & Cie. has equipped its tourbillon with a cylindrical balance spring, the same as that developed by Precision Engineering AG for MB&F’s LM Thunderdome. Invented in the 18th century, the cylindrical balance spring is reminiscent of a worm- or corkscrew, rising perpendicularly around the upper rod of the balance staff. Commonly used in historical marine chronometers at the time, it offers the advantage of developing concentrically, and therefore geometrically, since it works perfectly along the axis of its pivots. This gives it a significant advantage over the flat balance spring, whose opposite ends tend to exert forces on the pivots, despite the Philips or Breguet terminal curves which were specifically developed to partially correct the non-concentric opening of the balance spring. Fitted with a Breguet overcoil at both attachment points, the cylindrical balance spring reduces pivot friction and greatly improves isochronism. Due to its specific shape, the cylindrical balance spring is far more difficult to produce and takes ten times longer to make than a traditional balance spring.

Another reference to MB&F’s identity lies in the tilted dials, which H. Moser & Cie. has adopted for its hour and minute subdial, achieved in sapphire. This is inclined at 40° so that the owner of the watch is the only one to whom it reveals the secret of time, and mounted on a conical gear train ensuring optimal torque transmission from one plane to the other. Available in five different versions, the Endeavour Cylindrical Tourbillon H. Moser × MB&F model comes in a steel case topped by Funky Blue, Cosmic Green, Burgundy, Off-White or Ice Blue dials, all of the fumé variety.