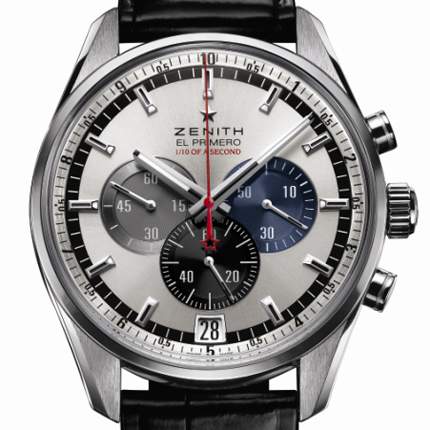 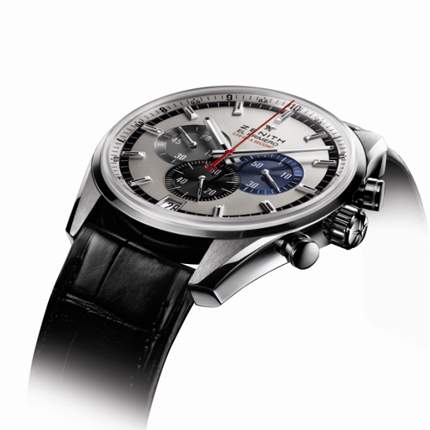 The El Primero Striking 10th chronograph embodies the grand return of the Manufacture Zenith to the technical values that have forged the brand's success. Unequalled to date, the legendary El Primero calibre was the world's first automatic chronograph to beat at a rate of 10 vibrations per second. It is the most sophisticated mechanical ‘motor' and the one boasting the highest degree of precision, since the vast majority of other mechanical movements beat at 8 vibrations per second at best. The model presented at Baselworld embodies a major horological breakthrough by showcasing tenths of a second, meaning each pulsation of this exceptional mechanism. This development represents a considerable advancement in the principle of jumping or flying seconds. Now for a closer look at this significant return to genuine watchmaking values. The higher the balance's frequency of oscillation – easily perceptible by the speed of the ticking – the higher the quality factor determining the accuracy of the movement. The El Primero calibre developed in 1969 opted for a cadence of 10 vibrations per second, a rate that still represents one of the greatest horological challenges, since other calibres generally reach a maximum of 8 vibrations per second.

Direct 1/10th of a second reading
The El Primero Striking 10th renders each pulsation of its motor clearly visible. Directly connected to the regulating organ, each jump of the central chronograph hand marks a 1/10th of a second, the smallest division of time measured by a series-produced mechanical calibre. While measuring such a short fraction of time is a genuine accomplishment in itself, making it perfectly readable is yet another. To achieve this, Zenith has considerably refined and improved the principle of jumping seconds. The chronograph hand makes a complete dial rotation in 10 seconds and each of its steps precisely indicates a 1/10th of a second against the 100 graduations engraved on the dial. It is worth nothing that, for the user of this chronograph, the 1/10th of a second is a natural unit of the decimal system, whereas the 1/8th or 1/5th of a second shown by socalled classic jumping seconds hands are far harder to perceive. With this model, Zenith is clearly reasserting its brand territory, meaning that of pure timekeeping performance.

El Primero Striking 10th
Its heart beats faster. Yours too
This chronograph exudes admirable presence on the wrist. The perfectly balanced case accentuates the resolutely masculine nature of this model. The three subdials consisting of the two chronograph totalizers and the running seconds display are arranged in a V shape on the lower part of the dial. The perfect readability of the measured time is guaranteed by three different shades on the subdials. The five-pointed star shines at the ‘zenith' of this timepiece which achieves the considerable technical feat of rendering each beat of its exceptional movement clearly visible.