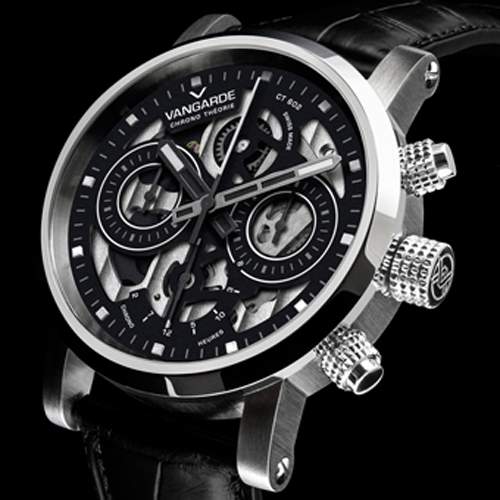 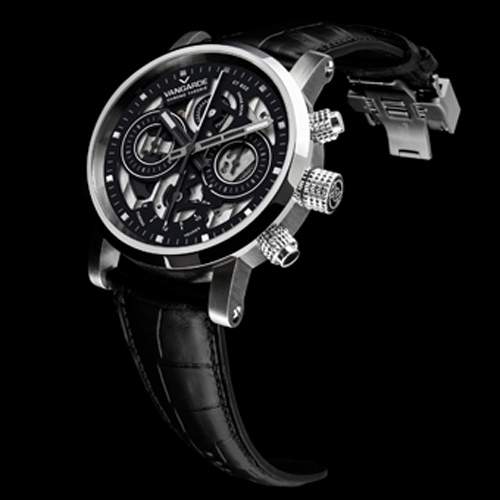 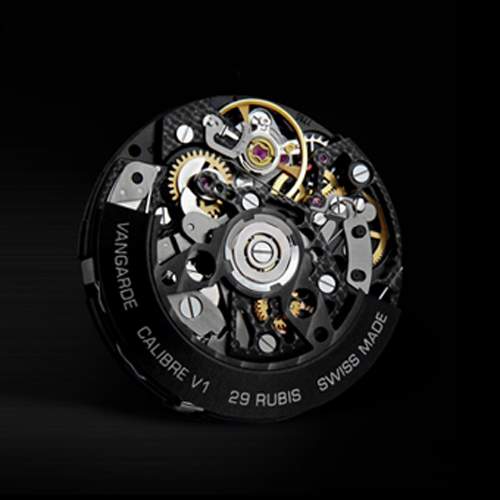 VANGARDE, the art of theory ...

At VANGARDE timepieces are not designed as conventional watch models but as theories.  Projects are first conceptualized at length to define a certain number of parameters, only then comes the phase of formal incarnation in order to give life to the concept. Incessant research, relentless perfectionism and the development of many versions are then required to achieve the completion of a timepiece worthy of being labeled VANGARDE.

Built as a creative fusion of watchmaking emotions, Chrono Theory represents the "vision" of the chronograph by creator VANGARDE.

A face with multiple expressions ...

The face of this creation, consisting of a set of movements, dial, hands, has been designed to provide many levels of structural perception, this feat was made possible through the development of an amazing concept of entanglement.

The realized entanglement created a comprehensive set, immediately noticeable, but also subtly separated subsets units.
These units which revolve mainly around the form, surfaces and planes, are formed by the dial-movement torque and is reinvented at the discretion of the movement of the hands for an incredibly subtle polymorphic kinetic experience.

Watching its face and focusing the eye at different levels of perception, the Chrono Theory expresses a multitude of changing aesthetic emotions, a concept which this chronograph offers a new vision in of the art of watchmaking.

Among the many details that make up this intriguing face include the following :

2 large symmetrical bicompax counters that, as a glance, represent the central component around which revolves the different emotions related to the concept of entanglement.

The dial cutting, whose form has been designed from a fusion of structures at different levels of reading and who plays on the duality of symmetry/asymmetry.

The bicolor hour and minutes hands promote the kinetic transformation of the elements and whose tips include the geometry of the V. logo

The counter hands "seconds" and "chrono minutes" provide the visual indication, masking the circle rather than directly pointing to the index.

The hours segment counter of chrono placed in a counterclockwise rotation and fused by the interweaving of the tampography....

The amount of variables taken into account in the design is such that it would be tedious to describe fully, as it is not possible to represent the multitude of aesthetic emotions produced by the concept here. This is a unique and personal experience which plays in a daily relationship between the timepiece and its wearer...

Starting from an ETA Valjoux 7750 ébauche, chosen for its reliability and ease of maintenance, Vangarde developed the Calibre V1.

The Calibre V1 has a bespoke skeletonised tri-compax back-plate and bridge, allowing the minute dial to be positioned at "3" (originally at "12" on the 7750). All critical components such as the balance wheel, balance spring, spring etc have been replaced by state-of-the-art components (certified chronometer).

The movement is assembled with the greatest care, adjusted in five positions. The surfaces are hand-finished with Geneva stripes, circular graining, and ‘traits tirés’.

The gears and the rotor have been redesigned to provide a unique view of the escapement and the self-winding system. A specially designed black ruthenium galvanising process produces the modern look that is expected in high-end contemporary chronographs.

The circular graining finish gives a 'carbon' look to the skeleton bridges, perfectly blending tradition and modernity, while the rotor is decorated with Geneva stripes. The steel mechanical parts and the escape wheel are finished with ‘traits tirés’. Side of the dial, too, is finished with Geneva waves, rhodium-plated wheels and ‘traits tirés’, and all screws are finely polished

The Chrono Theory has a 316L stainless steel case machined from solid, consisting of a single build with machined gauge housing (no casing ring) conntected with a bezel and screw back, both polished and equipped with O-rings.

The sapphire crystals have been given state of the art anti-reflection treatment in order to minimise unwanted reflection.

The caseband has a brushed, satinised surface which contrasts beautifully with the crown and the push buttons which are polished and decorated in 'Clous de Paris' style.

The bracelet is made in France in the way traditionally associated with master leather craftsmen. Made from carefully selected Louisiana alligator skin, it is hand assembled and sewn, then fixed to the casing with stainless steel tubular fixings.

So that it can be easily and safely attached the closing mechanism consists of a butterfly buckle with two push buttons with brushed, polished finishes decorated in 'Clou de Paris' style.