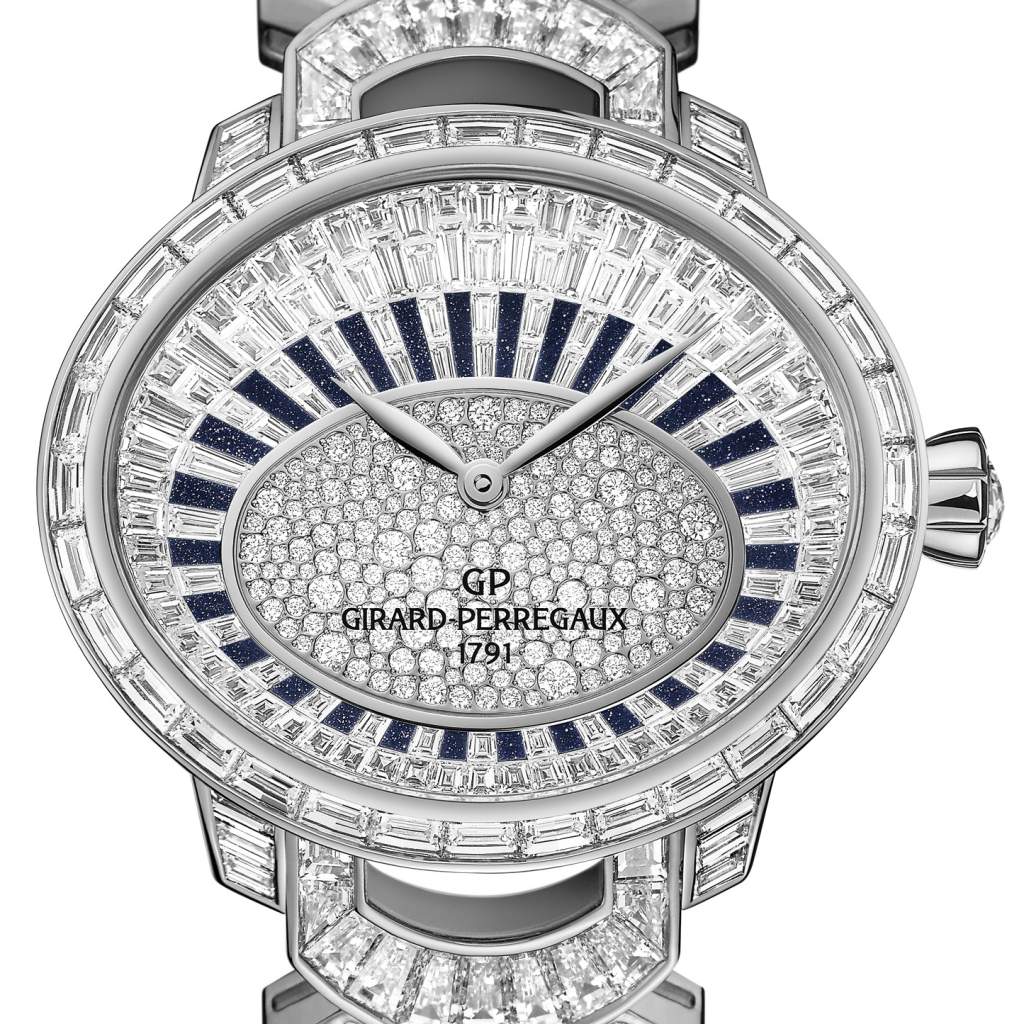 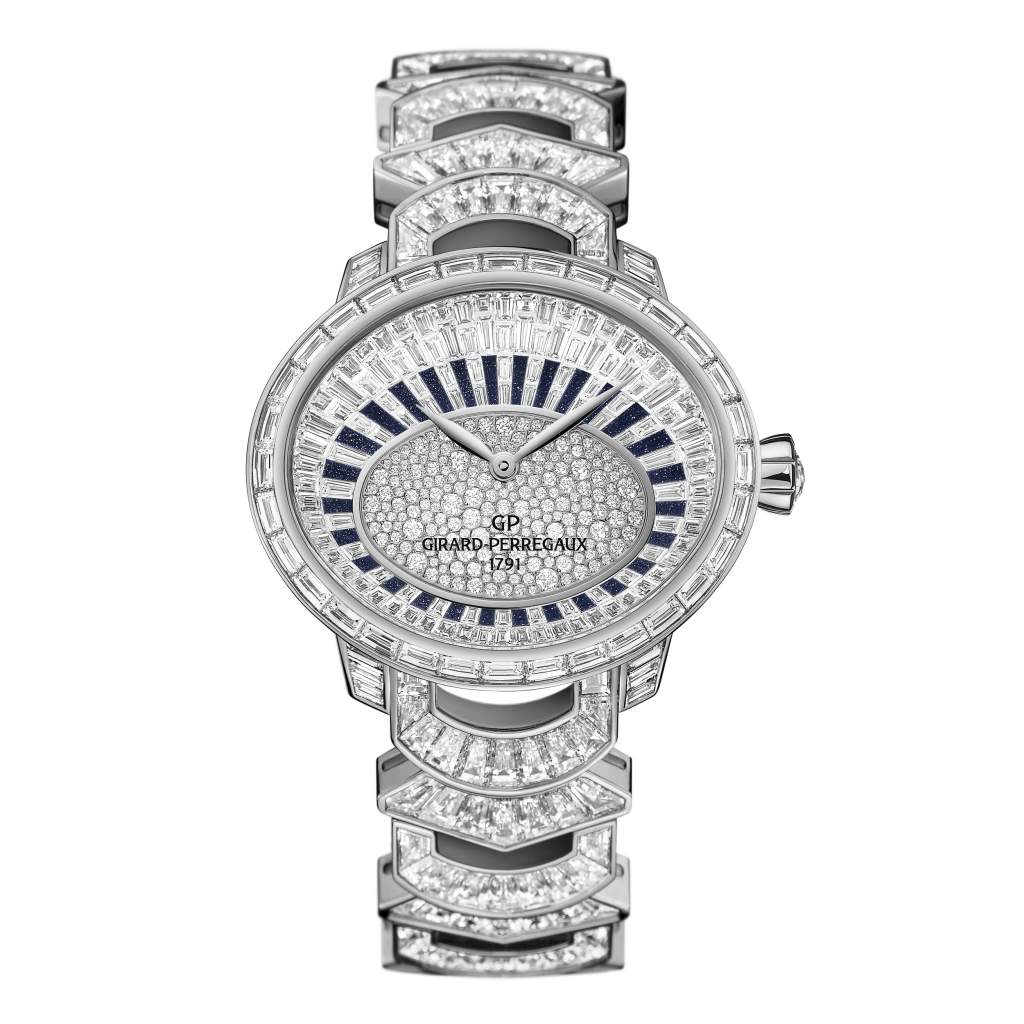 Diamonds sparkling in dazzling majesty. Such was Girard-Perregaux’ vision of this exceptional model, a contemporary interpretation of an infinitely glamorous dream. It naturally exudes a creative energy flowing from an almost lyrical structure composed of baguette- and brilliant-cut diamonds, with the perfect finishing touch set by an in-house self-winding movement. For Girard-Perregaux, feminine values go far beyond aesthetics alone.

This watchmaking gem truly comes into its own when actually worn, radiantly vivacious and vibrant. Its regal aura extends to the woman experiencing it on her wrist, delighting in a sense of communion exalting both beauty and radiance.

Back to the future

The oldest roots of the Maison date back to Jean-François Bautte, a Geneva watchmaker and goldsmith whose estate was acquired by Girard-Perregaux in 1906. The originality of Bautte’s creations was such that his workshops naturally became a rite of passage, attracting such prestigious visitors as Balzac, Dumas and the future Queen Victoria.

Dazzling observers? Definitely, but with contemporary characteristics. Developing a charismatic model reflecting the exciting and contrasting times we live in: such is the challenge facing today’s designers. Rather than figurative motifs, Girard-Perregaux prefers the ultra-graphic approach of a geometrical construction taking certain design cues from the Art Deco style. Right angles and the clean-cut edges of baguette-cut diamonds are softened by the emblematic oval shape of the Cat’s Eye model. This stylistic exercise involves walking an aesthetic tightrope. The execution is perfectly controlled, in keeping with the noblest traditions, yet driven by resolutely modern convictions.

Few watches are thus full-set from case to dial and through to the bracelet as well as its folding clasp. Yet a profusion of gems alone does not constitute the stage costume that captivates the public. Making the magic happens means playing with the depth effects and intrinsic qualities of this gemstone. No less than 599 diamonds of 190 different sizes are united in this one-of-kind model totalling 25.60 carats. Baguette-cut diamonds gravitate around the elliptical ‘orbit’ of the case, on the outer rim of the dial, thus composing the ‘scales’ of the supple, flowing bracelet. A paved motif of snowset diamonds occupies the dial centre. The light bounces off the 58 facets of their brilliant cut, while the baguette cut reveals the transparency of the gem formed inside the Earth’s crust. Girard-Perregaux uses only gems of the highest quality, which – like the gold used on this watch – meet the ethical, social and environmental criteria of the Responsible Jewellery Council (RJC).

A full 150 hours of work were required for the gemsetting alone on this creation. Moreover, this entrancing model is driven by a mechanical self-winding movement designed, developed and crafted by the Manufacture Girard-Perregaux in accordance with the finest Swiss watchmaking traditions. The transparent caseback provides a chance to admire Calibre GP03300-0140, thereby adding to the visual and technical power of this creation that is unique in every respect.

Girard-Perregaux is a Swiss luxury watch manufacturer that traces its origins to 1791. The history of the Brand is marked by legendary watches that combine sharp design with innovative artisanship such as the renowned Tourbillon with Three Gold Bridges, presented by Constant Girard-Perregaux in 1889 at the Paris Universal exhibition, where it was awarded a gold medal.

With more than 100 registered patents, Girard-Perregaux is devoted to the creation of state-of-the-art Haute Horlogerie and is one of the few watchmakers to unite all the skills of design and manufacture under the same roof — including the forging of the “heart” of the watch, the movement. In 2013, Girard-Perregaux received numerous prizes for its groundbreaking Constant Escapement L.M. timepiece, including the most prestigious one: The Aiguille d’Or of the Grand Prix d’Horlogerie de Genève.

Girard-Perregaux is part of the Kering Group, a world leader in apparel and accessories, which develops an ensemble of powerful Luxury and Sport & Lifestyle brands.