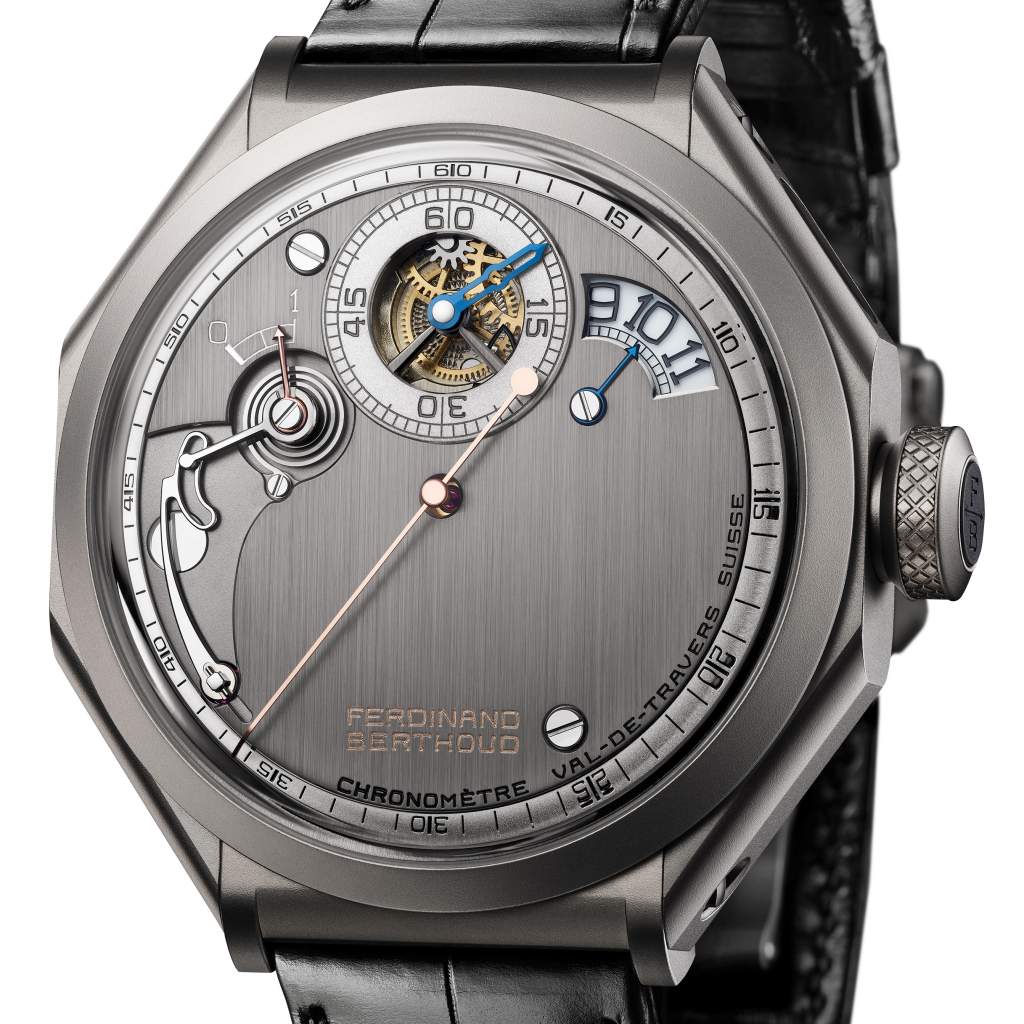 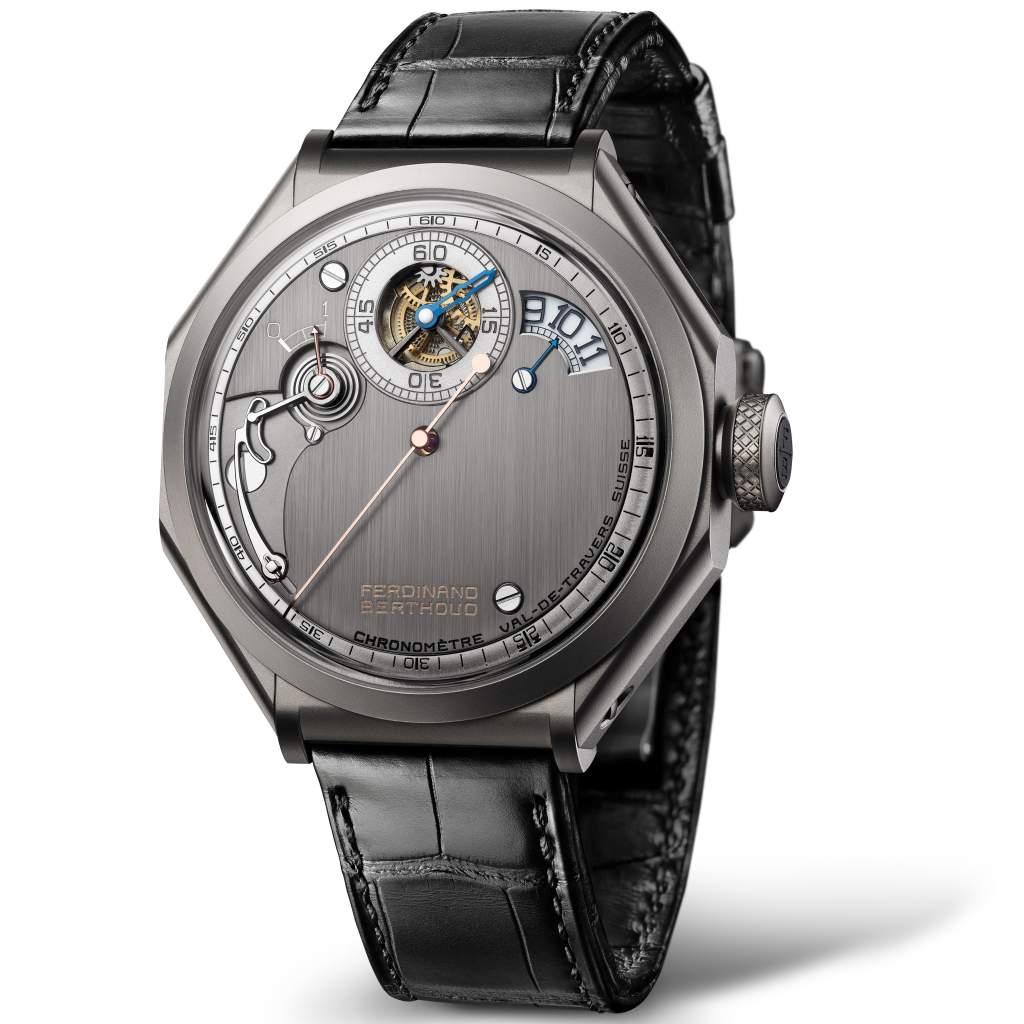 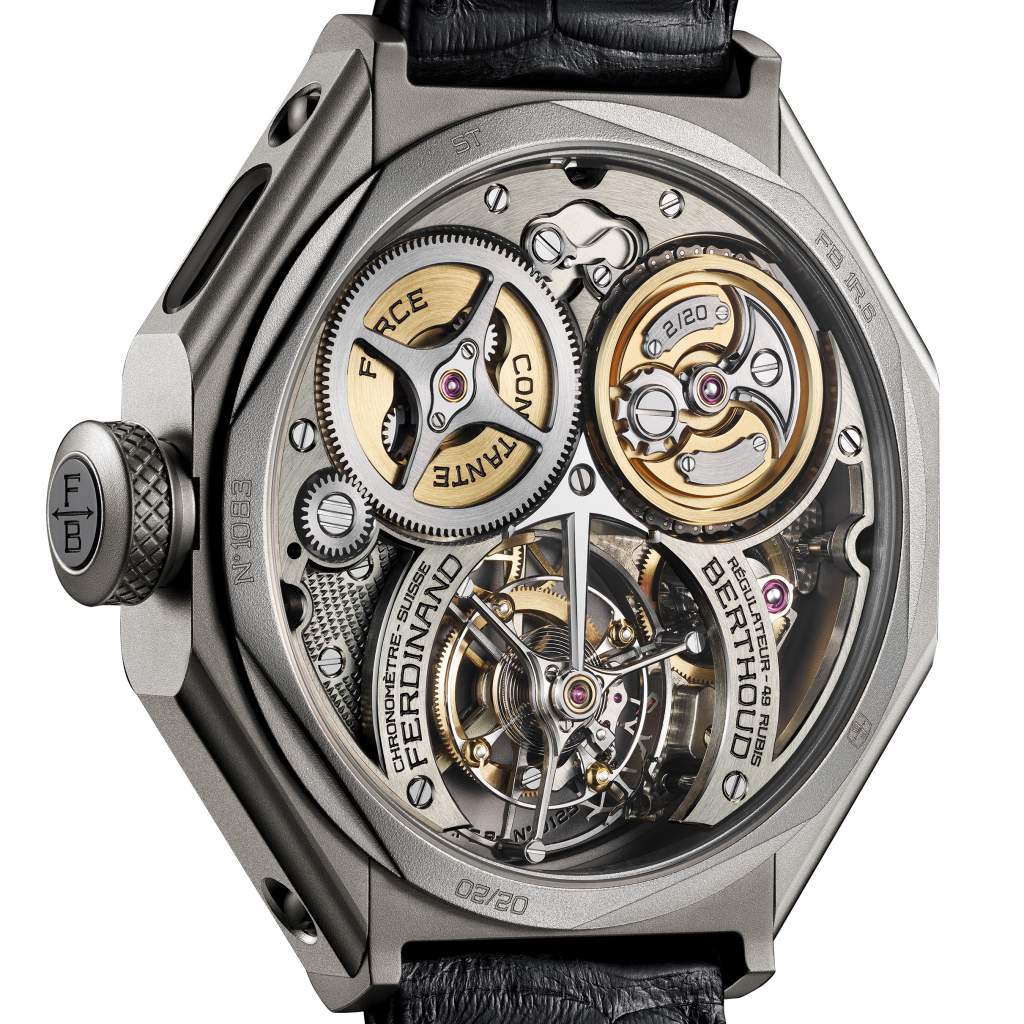 A REGULATOR TO STAND THE TEST OF TIME

Inspired by the marine chronometer No. 7 that Ferdinand Berthoud produced in 1767, the construction and the regulator-type display of the Chronomètre Ferdinand Berthoud FB 1R.6-1 overturn traditions. Composed of a black rhodium-plated nickel silver regulator plate satin-brushed by hand, the dial features three openings: one for the hours (at 2 o’clock), another for the minutes (at 12 o’clock) and a third for the power reserve (at 10 o’clock). The FB-T.FC.R calibre, with its pillar-type architecture, features a direct-drive centre seconds tourbillon whose constant force is provided by a fusee-and-chain transmission mechanism incorporating a satellite differential gear and Maltese cross stopwork device. Continuing the quest of precision inherited from Ferdinand Berthoud, this COSC-certified timepiece is available as a 20-piece limited edition in carburised stainless steel.

The Chronomètre FB 1R.6-1 is inspired by the scientific instruments represented by Ferdinand Berthoud’s marine chronometers. The appearance of the Chronomètre Ferdinand Berthoud FB 1R.6-1 takes its cues from the Marine Clock No. 7. The display of the latter differed from the usual rules governing regulators – which assign a different place on the dial to the hours, minutes and seconds displays – by the use of a large central seconds hand.

Pursuing this quest for exactitude, the regulator-type display of FB 1R collection is entirely in line with the philosophy of the master-watchmaker who devoted most of his life and his work to serving the French navy in his role as horologist-mechanic.

The construction of the Chronomètre Ferdinand Berthoud 1R.6-1 sets it apart from all existing regulator-type displays. Instead of featuring a high-up opening providing a view of the tourbillon and the fourth wheel (driving the seconds), the Chronomètre FB 1R.6-1 has a mostly solid dial. The latter is in fact the rear side of the complication plate that provides the regulator-type display.

It is made of nickel silver, vertically satin-brushed by hand and black rhodium-plated. Of the three small apertures, the first serves to show the hours, offset at 2 o’clock and appearing on a glare-proofed sapphire crystal disc bearing transferred Arabic numerals striking a pleasing contrast with a white background. The second opening features an original power-reserve display mechanism, distinguished by a large dial cut-out revealing part of the finely sandblasted and black rhodium-plated mainplate. Located in the centre of the minutes counter at 12 o’clock, the third aperture displays wheels and movement decoration.

Meanwhile, the seconds appear around the rim of the dial on a flat inner bezel ring made of black rhodium-plated, bead-blasted and chamfered nickel silver.

The FB-T.FC.R calibre is built according to a unique architectural concept. This hand-wound movement features 18 nickel silver bridges framed by polished titanium pillars surrounding the mechanical organs. This construction is typical of 18th century marine chronometers. The architectural approach is picked up in the design of all the components, and especially in the symmetrical equilibrium of the movement.

The distinctive nature of the FB-T.FC.R calibre lies in its inverted upside-down barrel and fusee, and particularly in the fact that both elements are suspended, meaning held on only one side. A patent has been filed for this construction which saves precious millimetres. At 9.89 mm thick, the movement of the Chronomètre Ferdinand Berthoud FB 1R.6-1 thus remains extremely thin for its category despite the regulator-type display and the new power-reserve indication.

This movement is one of the rare examples to feature a fusee-and-chain transmission, which is the oldest historical solution developed to ensure constant force for the escapement. This system acts like an automatic gear box, with the torque delivered by the barrel varying according to the level of winding.

When the movement is fully wound (53 hours of power reserve), the chain is entirely coiled around the small end of the fusee and the barrel spring is at maximum power. This force dwindles in the course of time, as the chain coils around the drum, moving from the small to the large end of the spindle-shaped fusee. The variation in the diameter of the fusee compensates for the reduction of the mainspring torque. The escapement thus receives constant energy, thereby equalling out the amplitude of the balance wheel and thereby enhancing the movement’s timekeeping precision.

Teamed with the fourth (seconds) wheel and pinion, the tourbillon of Calibre FB-T.FC-R comprises 67 components assembled within a titanium carriage measuring 16.55 mm in diameter, and fixed to a perfectly hand-polished and chamfered arrow-shaped steel arch whose tip points towards the space between the barrel and the fusee. To poise the escapement’s unbalance, two 18-carat gold inertia-blocks ensure the uniform spread of the weights of this large-size tourbillon. This tourbillon contributes to earning Calibre FB-T.FC.R its chronometer title awarded by the Swiss Official Chronometer Testing Institute (COSC). One particular characteristic makes the tourbillon extremely distinctive: although it performs one rotation per minute, it does not indicate the seconds, since the Chronomètre Ferdinand Berthoud FB 1R.6-1 is one of the rare tourbillons to have a central sweep-seconds hand. Extremely long, slim and made of gilded bronze, the latter moves with remarkable accuracy and in a remarkable stable manner.

Limited to 20 pieces, the FB 1R.6-1 model features a 44 mm-diameter case, made of carburised stainless steel. The molecular structure of this steel has been reinforced by a thermo-chemical process involving the diffusion of vapour-phase carbon, thereby guaranteeing an exceptional surface hardness of 1200 Vickers and making it extremely robust. It is also exceptionally corrosion-resistant and biocompatible.

The choice of this type of steel, currently used in the aerospace industry, is a nod to the maritime expeditions achieved using the Marine Chronometers produced by Ferdinand Berthoud in the 18th century and which required the use of extremely sturdy materials.

A patent has been filed for the extremely sophisticated power-reserve indication mechanism. Visible through a cut-out in the half-bridge on the case-back side, a truncated cone moves up and down along an arbor connected to the barrel. This suspended cone is topped by a feeler spindle in the form of a mobile arm tipped with a watch jewel. The latter’s position on the cone reflects the barrel’s state of wind.

The feeler spindle in turn transmits the quantity of energy accumulated by the mainspring to a set of finely chamfered and rhodium-plated flat levers visible through a cut-out in the regulator plate. Its role is to amplify the displacement of the power-reserve hand. A spiral spring placed at the far end of its travel exercises a force on the base of the power-reserve hand. This spring serves to compensate for the play between the various components of this mechanism and to display the power reserve with peerless precision.

A number of complex mathematical calculations and various tests served to fine-tune the geometry of this spring, made from a nickel-phosphorous alloy in order to guarantee the concentric deployment of the coils in all states of winding and unwinding, and thereby to avoid any unattractive distortion that might also be detrimental to the smooth running of the mechanism. This ingenious device is imbued with the experimental spirit of Ferdinand Berthoud himself, who revelled in exploring solutions resolutely off the beaten track.