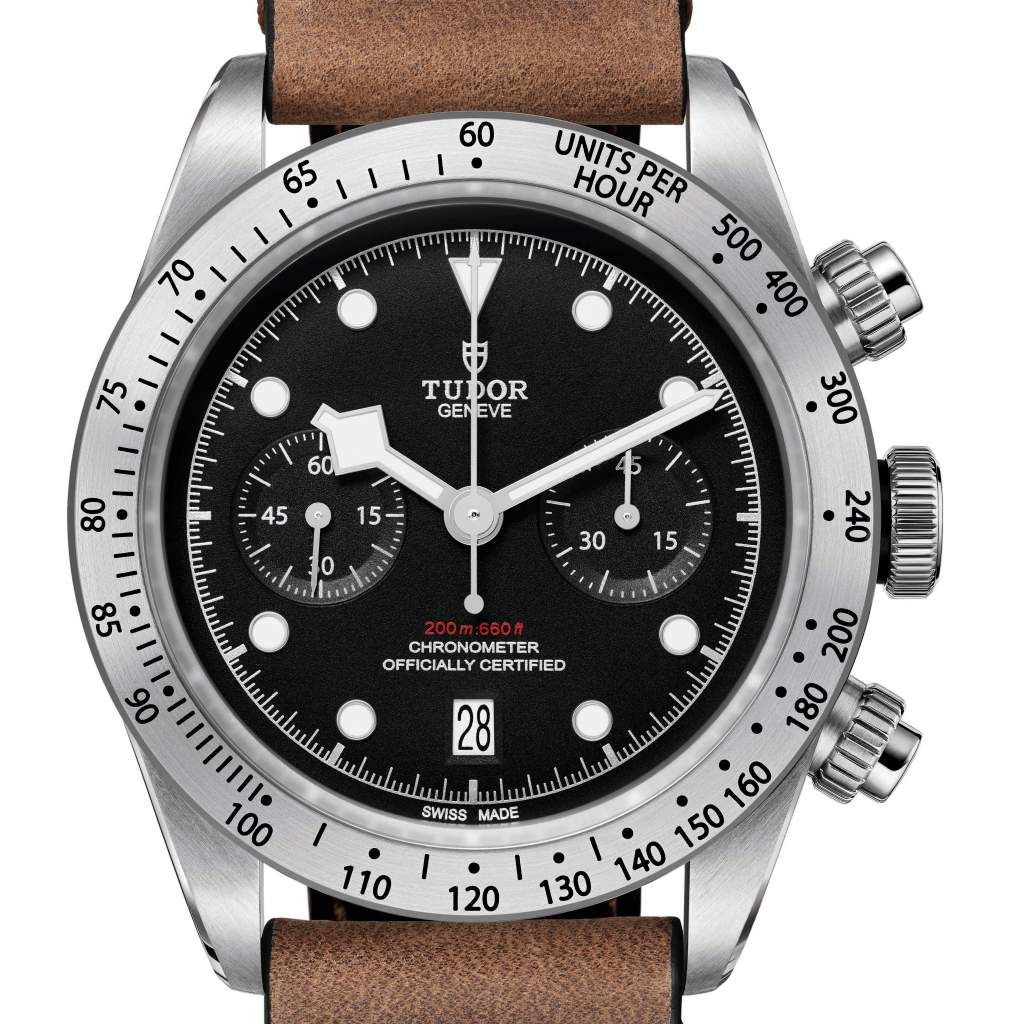 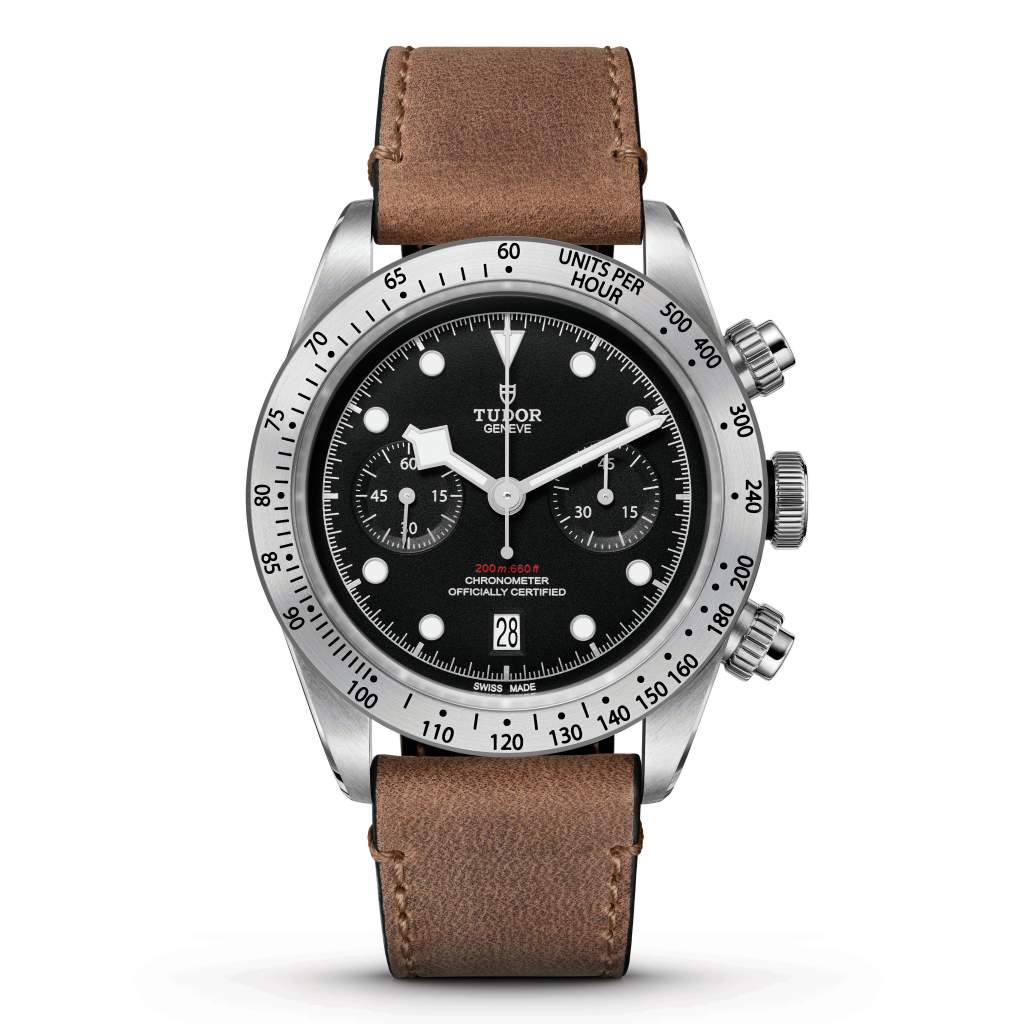 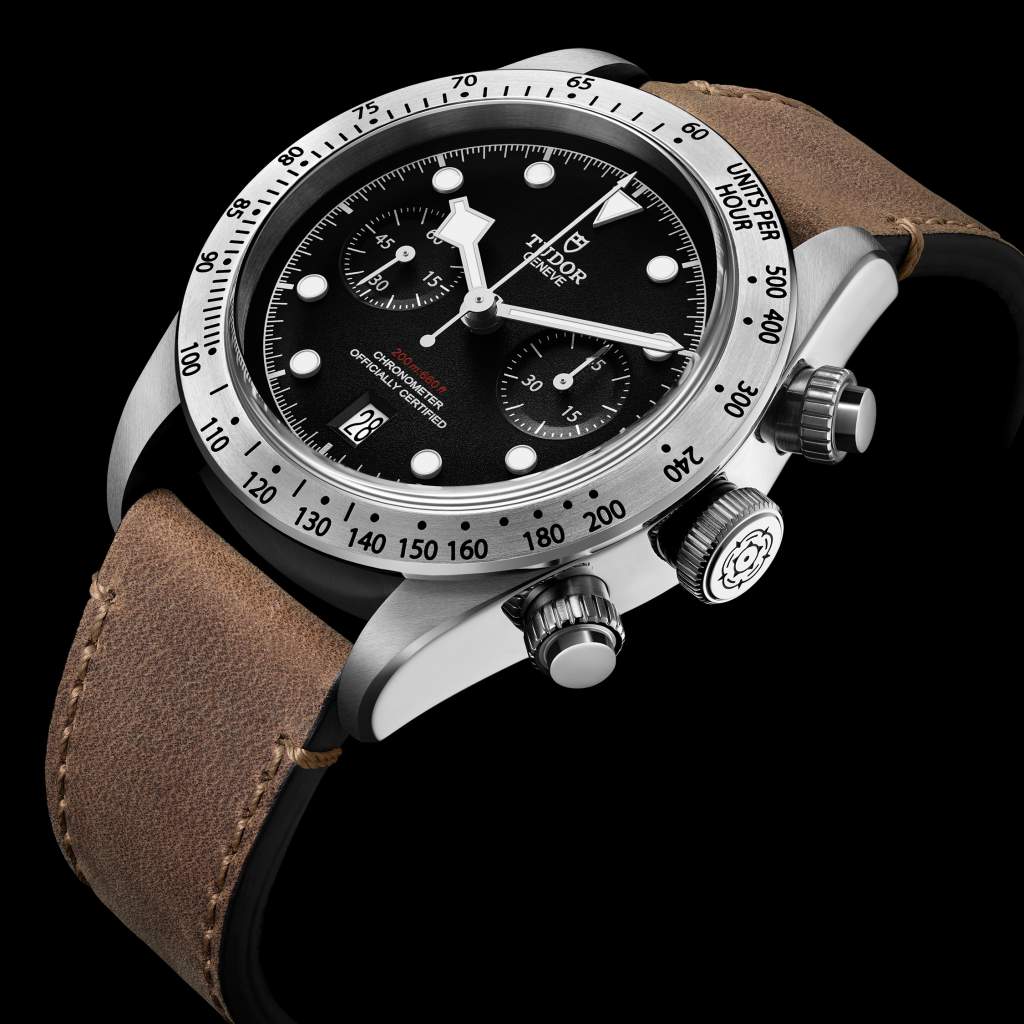 Since the presentation in 1970 of the Prince Oysterdate Chronograph, its first chronograph, TUDOR has always produced watches that are closely tied to the world of motorsports. In the same way, since 1954 TUDOR has been constantly improving its professional divers' watches. The new hybrid Heritage Black Bay Chrono chronograph dares to combine the aquatic heritage represented by the Black Bay family with the queen of the racetrack, the chronograph. Remaining faithful to the Black Bay aesthetic with the famous snowflake hands –a brand signature since 1969– the Heritage Black Bay Chrono model offers optimum readability against the domed matt black dial. Its sub-counters are hollowed for optimum contrast and a date aperture is positioned at 6 o'clock. The recognisable characteristics of the Black Bay are preserved in a steel case with a 41-millimetre diameter, fitted with pushers inspired by the first generation of TUDOR chronographs. A fixed bezel in circular satin-brushed steel with engraved tachymetric scale completes the face of this sporty new chronograph.

Boasting a 70-hour power reserve, a silicon balance spring and certification by the Swiss Official Chronometer Testing Institute, the Manufacture chronograph Calibre MT5813 that drives the Heritage Black Bay Chrono model is a high-performance movement. Crafted in the purest watchmaking tradition, with column wheel mechanism and vertical clutch. In keeping with the TUDOR philosophy of quality, it presents extraordinary robustness and reliability, guaranteed by an array of extreme tests applied to all TUDOR products. Derived from the chronograph manufacture calibre Breitling 01, with a high-precision regulating organ developed by TUDOR and exclusive finishes, this movement is the result of a recent collaboration between the two brands, which now pool their expertise in the design and production of certain mechanical movements.

The fabric strap is one of the signatures of the Heritage line, and TUDOR was one of the first watch brands to offer it. Woven on 19th century Jacquard looms by a 150-year-old family firm from the region of St-Etienne, its manufacturing quality and comfort on the wrist are unique. The Heritage Black Bay Chrono model presents a complimentary navy-blue denim-style strap designed by TUDOR and woven by this craftsman. In addition to the complimentary denim-style strap that comes with every Heritage Black Bay Chrono, there is a choice of two bracelet designs. The first is a steel bracelet inspired by the folding riveted bracelets of the TUDOR watches produced in the 1950s and 1960s. These were famous for having rivet heads for attaching the links, shown on the side of the bracelet. The links also had a distinct stepped construction. These two aesthetic details are integrated into this strap, which still presents a modern construction with solid links. The second is a leather strap in a rich brown, with folding clasp.

The origins of the Black Bay inspiration

TUDOR derived the characteristic aesthetic elements of the Heritage Black Bay Chrono model from its history. The overall shape, as well as the domed dial and crystal, come from the first TUDOR divers' watches. The prominent winding crown is a feature of the famous reference 7924 from 1958. The first TUDOR watch to be waterproof to 200 metres (660 ft), known as the Big Crown. Finally, the characteristic angular hands, known as snowflake, are typical of the watches delivered to the French Navy in the 1970s.