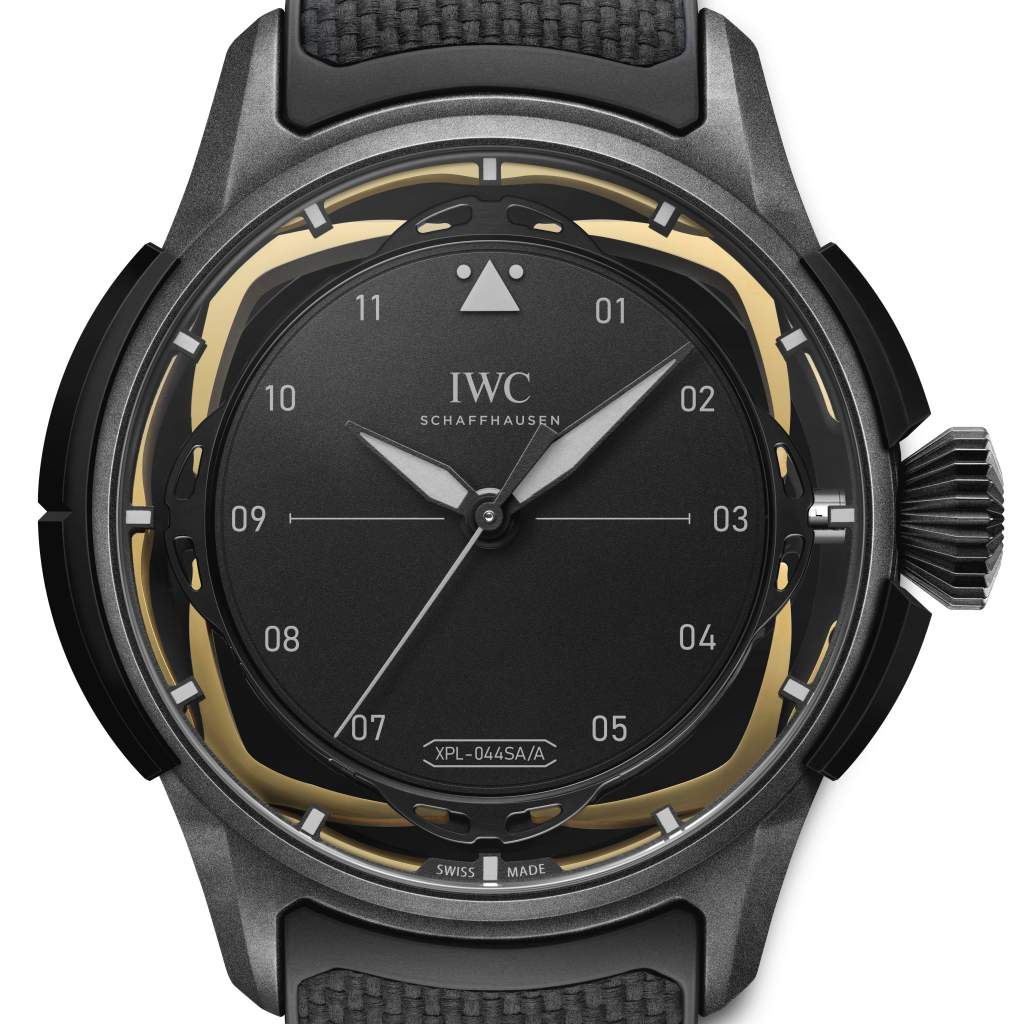 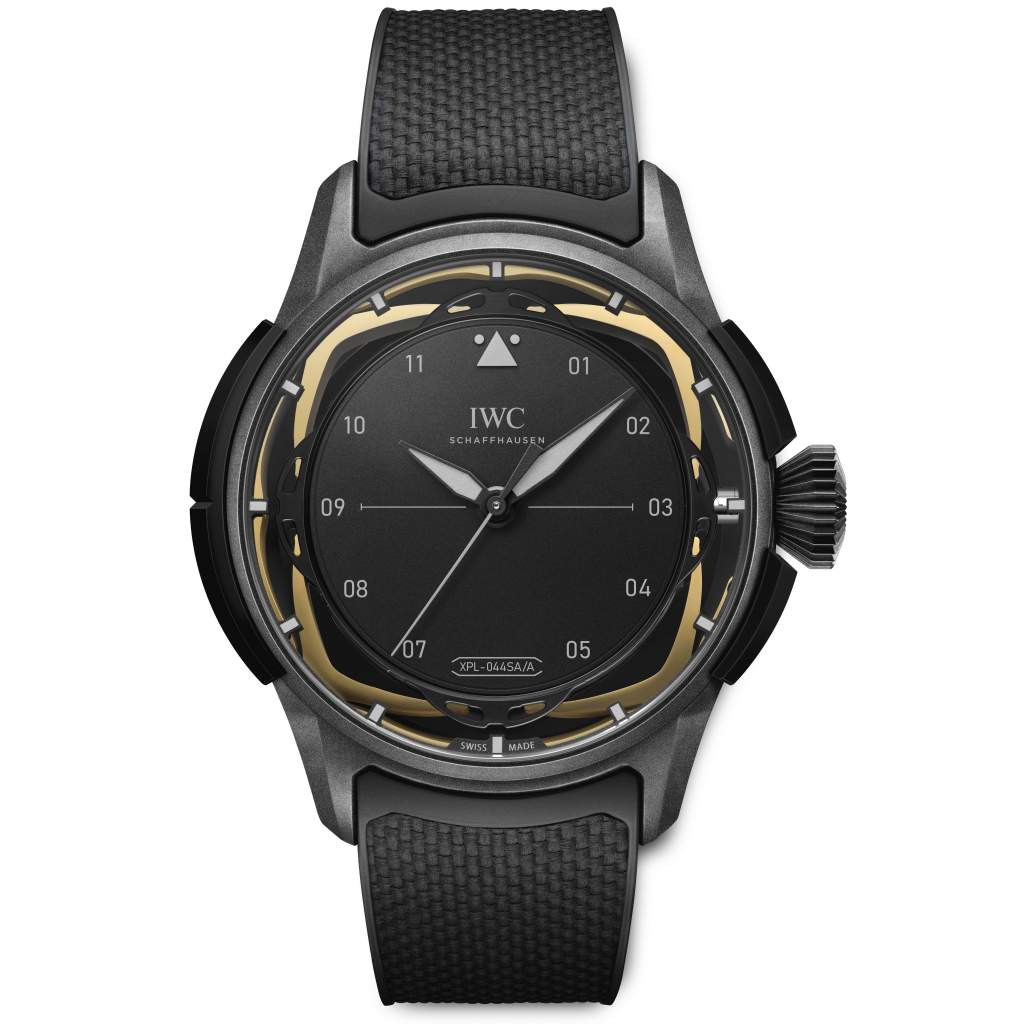 Pilot’s operate under extreme conditions and in cramped cockpits, surrounded by sharp-edged metallic objects. Therefore, extraordinary robustness has always been one of the most important functional requirements for IWC’s pilot’s watches. After an 8-year engineering journey, the brands new engineering division, “IWC Experimental”, has now succeeded in pushing the limits of what is physically possible in protecting the movement of a mechanical watch against shocks. The Big Pilot’s Watch Shock Absorber XPL (Ref. IW357201) is the first IWC watch to feature the patented SPRIN-g PROTECT system. At the heart of this system is a cantilever spring that protects the movement against the g-forces generated by impacts. It cushions the movement, allowing it to keep moving independently of the case before bringing it to a stop more gently. The spring has been designed with a perfect form to evenly spread the stress across its length and width. Solving this challenge required advanced simulation tools and a painstaking design process. A key factor is also the choice of an advanced Bulk Metallic Glass (BMG) as a material. The sophisticated manufacturing process gives BMG an amorphous microstructure, with the result that it is significantly more elastic than conventional metals. An ultra-lightweight titanium casing ring further reduces the mass that the shock absorber must hold. Another innovation is a unique crown system with a winding stem that allows the movement to displace independently of the case. The IWC-manufactured 32115 calibre used for this watch is a custom-made lightweight construction. Several of its components are made from a high-tech aluminum alloy also used in the aerospace sector, which is light and extremely rigid at the same time. The bidirectional pawl winding system builds up a power reserve of 120 hours. To put the SPRIN-g PROTECT system through its paces under the most realistic conditions, IWC collaborated with the Fracture & Shock Physics group at the Cavendish Laboratory of Cambridge University in England, U.K. The scientists used laser-based measurement methods and high-speed video recording to analyze the effects that impacts show on the movement. During these impact tests, protected movements have survived the extreme forces from accelerations in excess of 30,000 g. To put this in perspective, if a pilot accidentally hits his watch against a hard surface in the cockpit, accelerations are in the range of 300 to 1000 g. The powerful case geometry takes the iconic shape of the Big Pilot’s Watch design to a completely new level by adding a futuristic surface treatment and details throughout the entire watch exterior. The case is made of Ceratanium®, an IWC-developed material based on a proprietary titanium alloy. It is as light and robust as titanium but similarly hard and scratch-proof like ceramic. The stealthy black design is complemented with a black dial, a technical anti-reflective coating on the front glass, and a black rubber strap with leather inlay. Due to the complexity of the manufacturing process, the annual production of the Big Pilot’s Watch Shock Absorber XPL will be limited to 10 pieces.

IWC unveiled the first Special Pilot’s Watch in 1936. The Big Pilot’s Watch followed 4 years later and was the ultimate deck watch. In 1948, the Schaffhausen watch manufacturer supplied the Mark 11 to British Royal Air Force, where it remained in service for almost 40 years. The cockpit-instrument look of these three iconic watches inspires the design of classic pilot’s watches to this day. The IWC Pilot’s Watch family is divided up into five distinct lines. The classic Pilot’s Watches are instantly recognizable thanks to their black-and-white dials and the triangular index at “12 o’clock”. The shimmering metallic dial on each Spitfire watch is reminiscent of the fuselage of their legendary namesake. Watches in the TOP GUN collection feature a classic dial and a black ceramic case with push-buttons and a crown made from titanium, while the TOP GUN Miramar line sports authentic military-style design cues. The “Antoine de Saint Exupéry” and “Le Petit Prince” special editions pay tribute to the life and work of the French author and pilot.

Over its 150-year history, IWC Schaffhausen has developed a reputation for creating functional complications, especially chronographs and calendars, which are ingenious, robust and easy for customers to use. A pioneer in the use of titanium and ceramics, IWC today specializes in highly engineered technical watch cases manufactured from advanced materials, such as titanium-aluminide and Ceratanium®. Preferring the principle of “form follows function” over decoration, the Swiss watch manufacturer’s timeless creations embody their owners’ dream and ambitions as the journey through life.