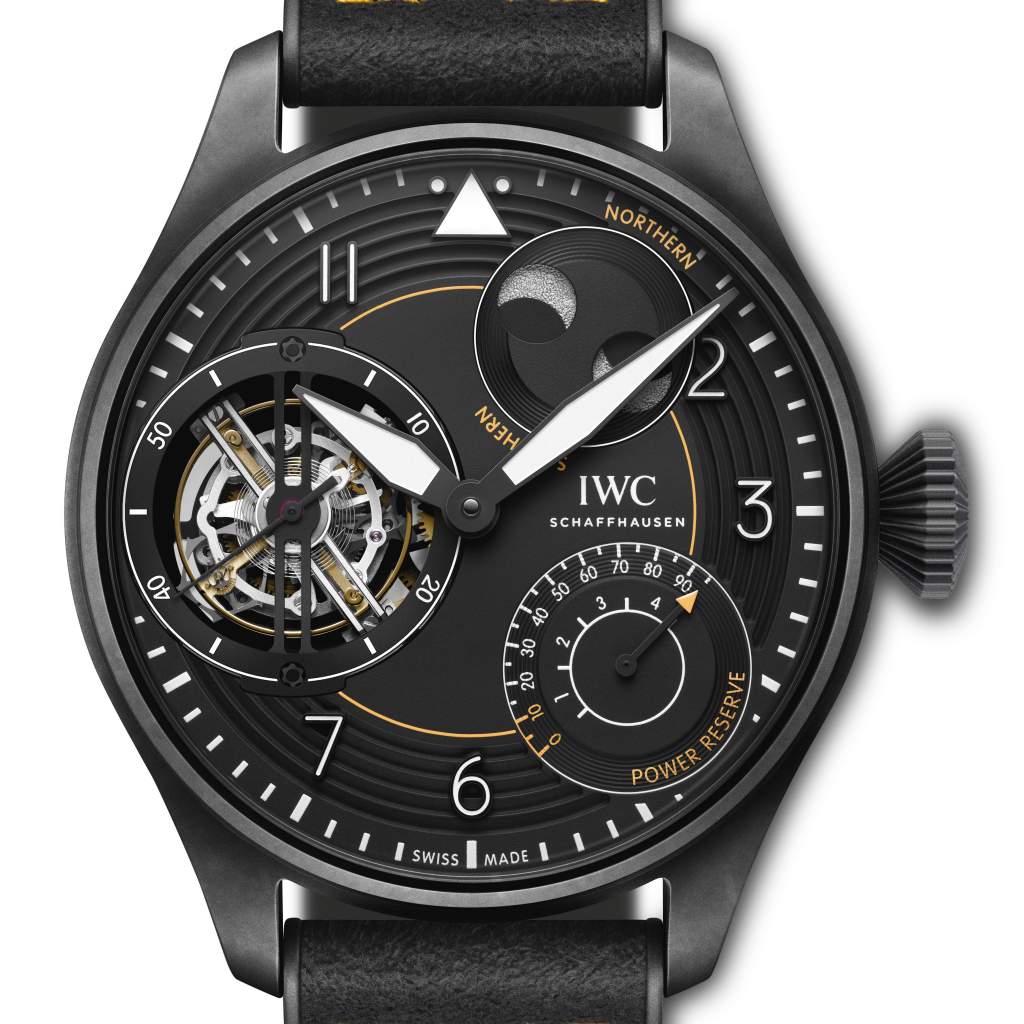 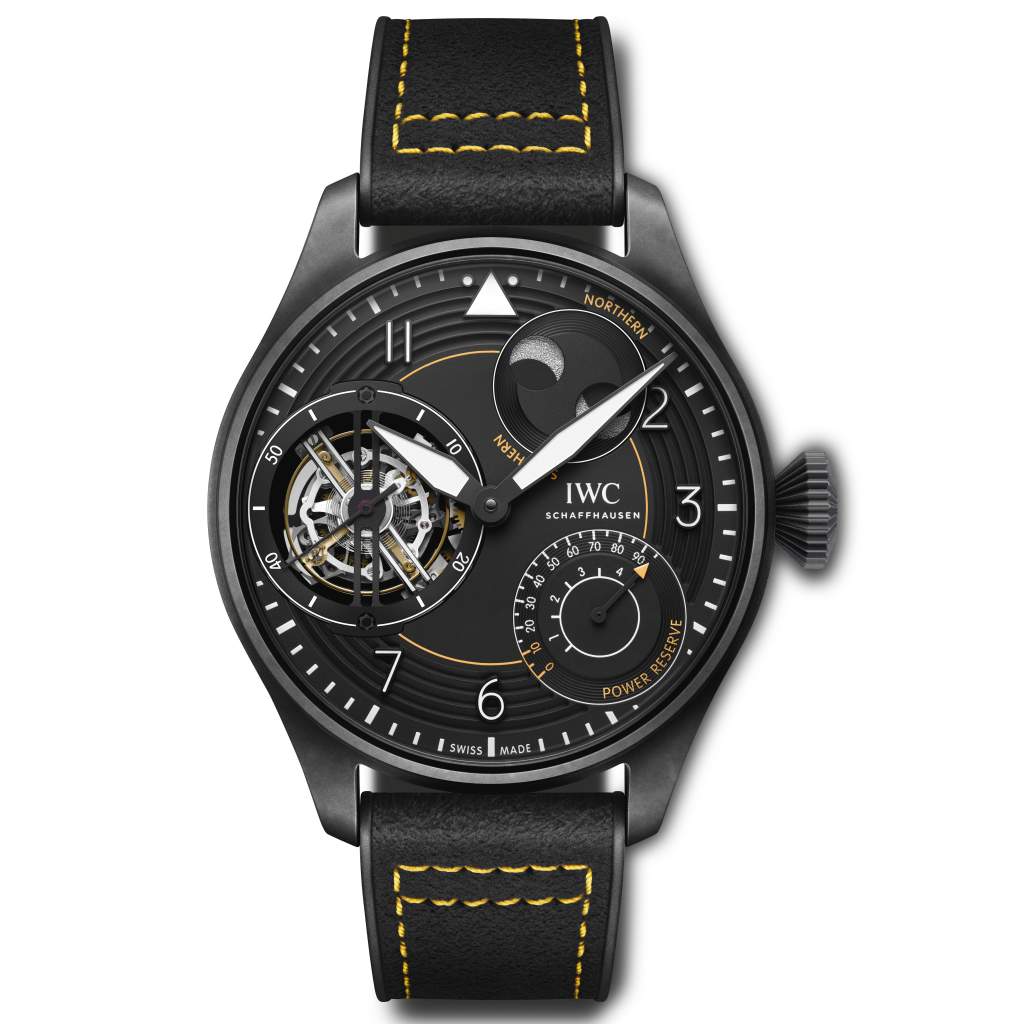 Motor racing combines performance engineering, cutting-edge technology and innovative materials with pure adrenaline. This dynamic world has now inspired a unique timepiece from IWC, of which only 15 pieces will be made: The Big Pilot’s Watch Constant-Force Tourbillon Edition “IWC Racing“ is the first Big Pilot’s Watch made of Ceratanium®. Developed by IWC, this ground-breaking material is based on a proprietary titanium alloy and fired in a kiln. It is as light and robust as titanium but at the same time similarly hard and scratch-resistant as ceramic. All components of the case, including the conical crown and the pin buckle, are made of Ceratanium® and boast a unique matte-black finish. The powerful engine of this portable racing machine is the IWC-manufactured 94800 calibre, one of the most complex movements ever designed by IWC. The patented constant-force mechanism disengages the escapement from the direct flow of power from the wheel train and transmits completely even impulses of energy to the escape wheel. In conjunction with the tourbillon, which compensates for the negative influences of gravity on the oscillating system, this ensures a highly exact rate. The pates and bridges, blackened in an elaborate rhodium-plating process, match the colour of the case. The movement is reminiscent of an engine block and can be viewed through the transparent glass back. With white numerals and yellow colour accents, the black dial recalls the style of a dashboard. In addition to the constant-force tourbillon and the double moon phase display for the northern and southern hemisphere, it also boasts a power reserve display in the design of a tachometer. The ribbed, ring-shaped structure of the outer dial ring takes inspiration from the cold air intakes of high-performance engines. Even the black rubber strap features a detail from the world of racing: it boasts an inlay made of Alcantara®*, a synthetic and durable micro-fibre with superb grip. This material is used for the seats and steering wheel covers of performance cars. * IWC Schaffhausen ist not the owner of the Alcantara® trademark. This mark is protected as the legal property of third parties.

The 94000-calibre is a hand-wound movement with two barrels, which provide the necessary energy for a number of different complications. The 94800-calibre version provides higher torque to drive the constant-force tourbillon and additionally, powers the moon phase and the power reserve displays. In the 94900 version, it provides the power needed for the astronomical module in the Portugieser Sidérale Scafusia. This extravagant timepiece features displays for sidereal and solar time, the times of sunrise and sunset, and shows the section of the night sky currently visible. In the 94200 calibre, the second barrel powers the separate wheeltrain for the discs of the digital Pallweber display for the hours and minutes.

IWC integrated a patented constant-force mechanism into a tourbillon, which ensures that the amplitude of the balance – and thus the watch’s accuracy – remain absolutely constant, initially by disconnecting the escapement from the direct flow of energy generated by the gear train. The energy is stored temporarily in a balance spring and dispensed to the escape wheel. In the process, the tension in the spring is increased once a second and the seconds hand in the tourbillon advances in one-second steps. This ensures an extremely regular and precise rate over a period of at least 48 hours. After approximately 2 days, the mechanism switches from constant-force mode to normal mode, as indicated by the one-fifth-of-a-second movements in the seconds hand.

IWC unveiled the first Special Pilot’s Watch in 1936. The Big Pilot’s Watch followed 4 years later and was the ultimate deck watch. In 1948, the Schaffhausen watch manufacturer supplied the Mark 11 to British Royal Air Force, where it remained in service for almost 40 years. The cockpit-instrument look of these three iconic watches inspires the design of classic pilot’s watches to this day. The IWC Pilot’s Watch family is divided up into five distinct lines. The classic Pilot’s Watches are instantly recognizable thanks to their black-and-white dials and the triangular index at “12 o’clock”. The shimmering metallic dial on each Spitfire watch is reminiscent of the fuselage of their legendary namesake. Watches in the TOP GUN collection feature a classic dial and a black ceramic case with push-buttons and a crown made from titanium, while the TOP GUN Miramar line sports authentic military-style design cues. The “Antoine de Saint Exupéry” and “Le Petit Prince” special editions pay tribute to the life and work of the French author and pilot.

Over its 150 year history, IWC Schaffhausen has developed a reputation for creating functional complications, especially chronographs and calendars, which are ingenious, robust and easy for customers to use. A pioneer in the use of titanium and ceramics, IWC today specializes in highly engineered technical watch cases manufactured from advanced materials, such as titanium-aluminide and Ceratanium®. Preferring the principle of “form follows function” over decoration, the Swiss watch manufacturer’s timeless creations embody their owners’ dream and ambitions as the journey through life.