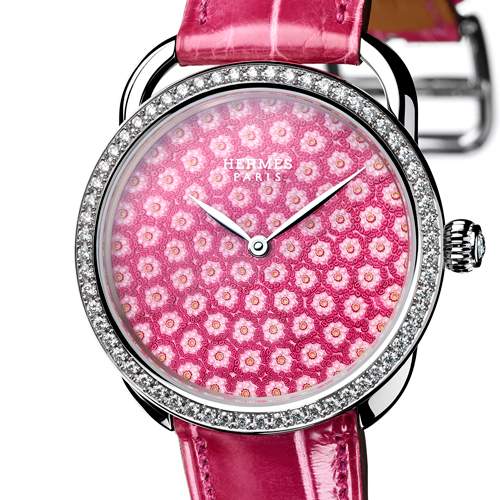 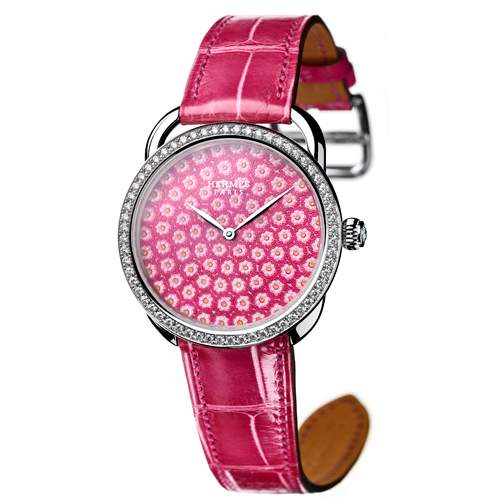 Within its Arceau Millefiori models, Hermès encapsulates an unusual encounter between watchmaking and glassmaking. Its exceptional wristwatches and pocket watches, beating to the tune of mechanical calibres produced in the Swiss workshops of La Montre Hermès, are lit up by dials and covers inspired by 19th century paperweights, crafted by the Cristalleries royales de Saint-Louis.

Today, just as in the past, everything at Saint-Louis begins with the glass-melting furnace known as a pot furnace. The gatherer or ball-maker dips a punty (metal rod or blowpipe) into the mouth of these pots, each containing a colour of crystal or enamel, and twirls the molten matter to form a homogenous bubble-free mass known as a gob. Thus begins the patient work of the master glassmakers, performing a silent ballet known to them alone. The punty is passed on from hand to hand, from breath to breath and from workshop to workshop, until a monochrome crystal sprue is formed which will serve to create the canes that will in turn give rise to the ‘millefiori’ motif (a combination of Italian words meaning ‘a thousand flowers’).

Crafted by applying successive layers of crystal to enamel to reveal the colour, these canes resemble barley sugar candy canes. They are in some cases assembled to form ever-richer patterns. Whatever their colour or design, the process itself remains identical.

A glassworker takes a gob of molten crystal to which a second artisan applies his punty, before moving away as far as the temperature of the matter permits. He pulls or draws with him a several metre-long thread measuring just a few millimetres in diameter, and which will then be broken into several sections.

The canes thus created are cut into small ten-millimetre portions that are then vertically placed in a cast- iron bowl, where they form a bed of flowers.
 While one master glassmaker prepares a crystal ‘calotte’ or ‘skullcap’, the part that fixes it to the rod, a colleague brings him the bowl containing the millefiori. With the tip of his punty, the first artisan adds the molten clear crystal, fusing the two blocks so as to encapsulate or “package” the motif in glass. The punty then returns to the port opening in the furnace, and the material is worked with a shaping block or ladle-like wooden tool, meticulously fashioned with a wooden pallet – sometimes even with paper – to achieve the required shape. To set the finishing touch to the paperweight, the glassmaker creates a collar that will enable him to cut off the desired portion of crystal.

It is only during the final cutting stage that the crystal reveals the full wealth of its pattern and the unique beauty of the flowerbed with its vividly shimmering colours that will become the dial or cover of one of the Arceau models.