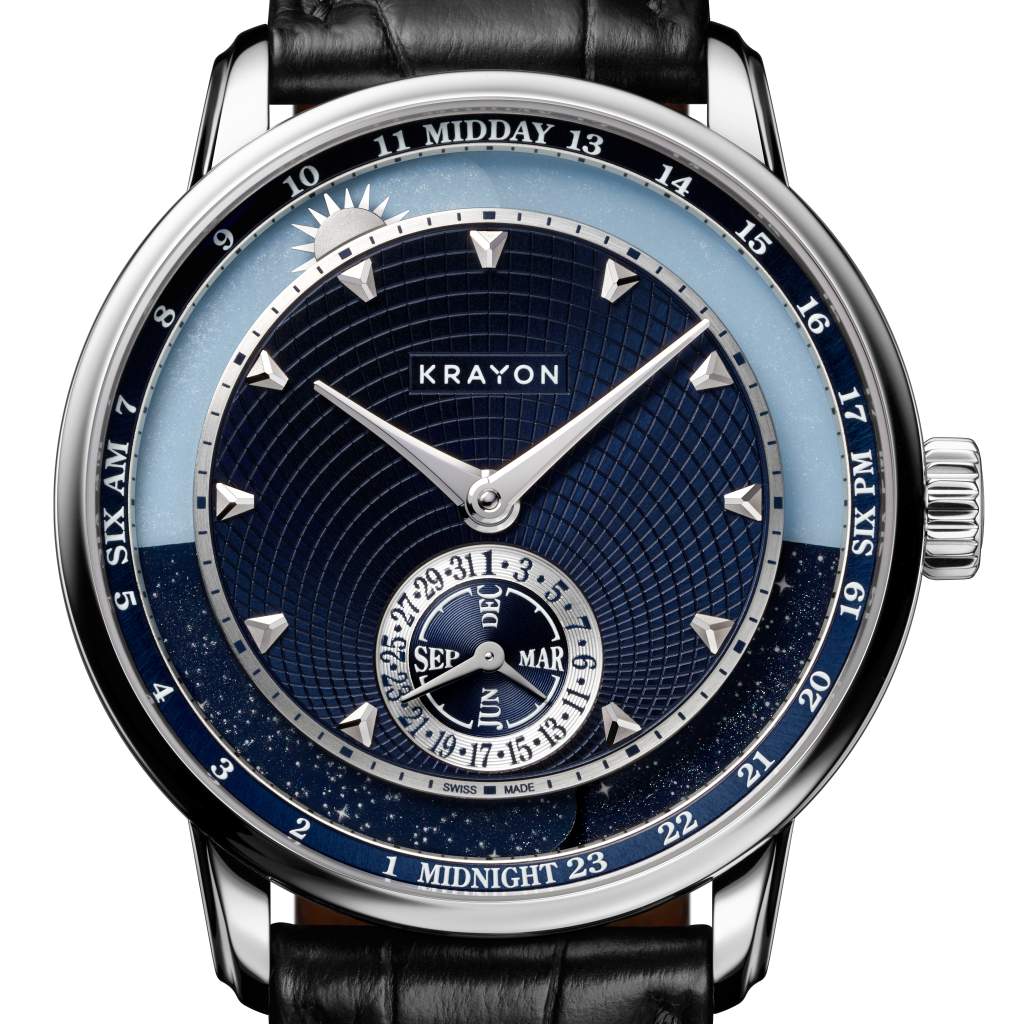 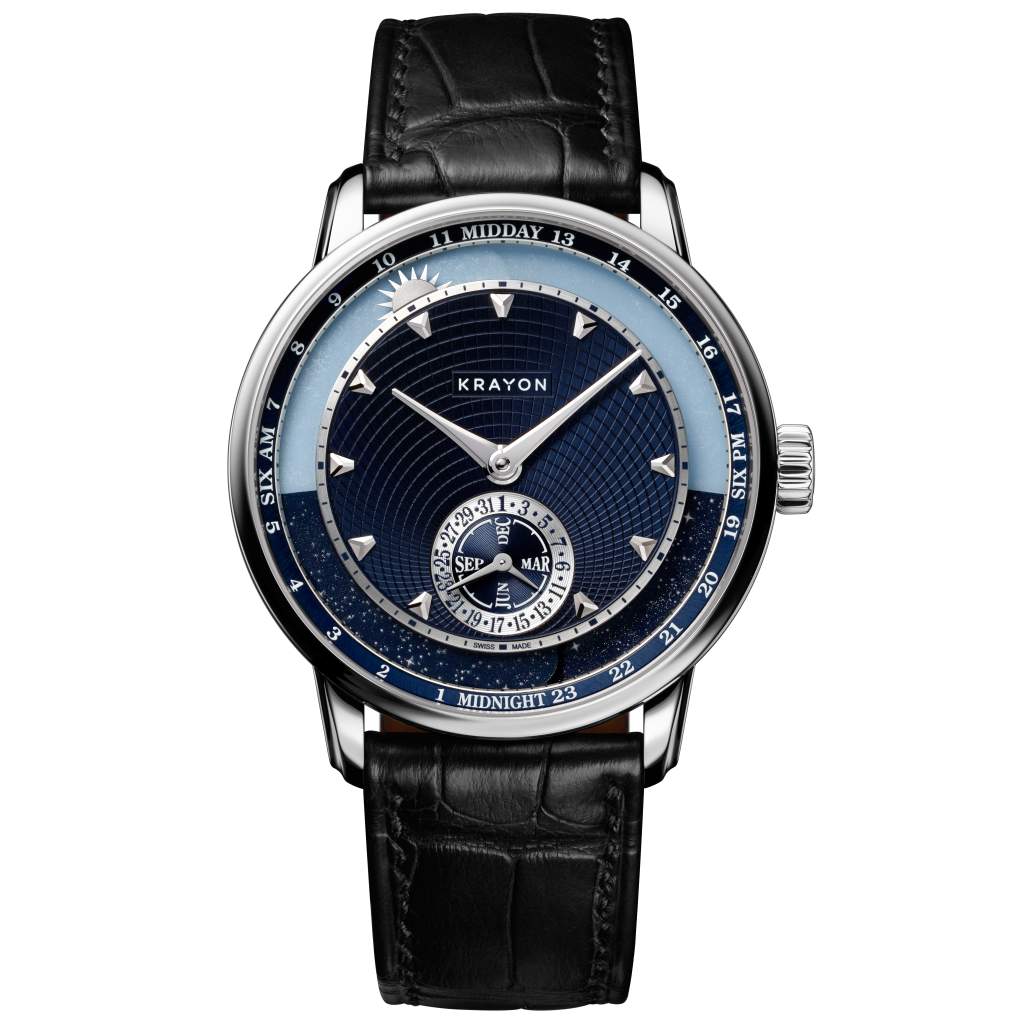 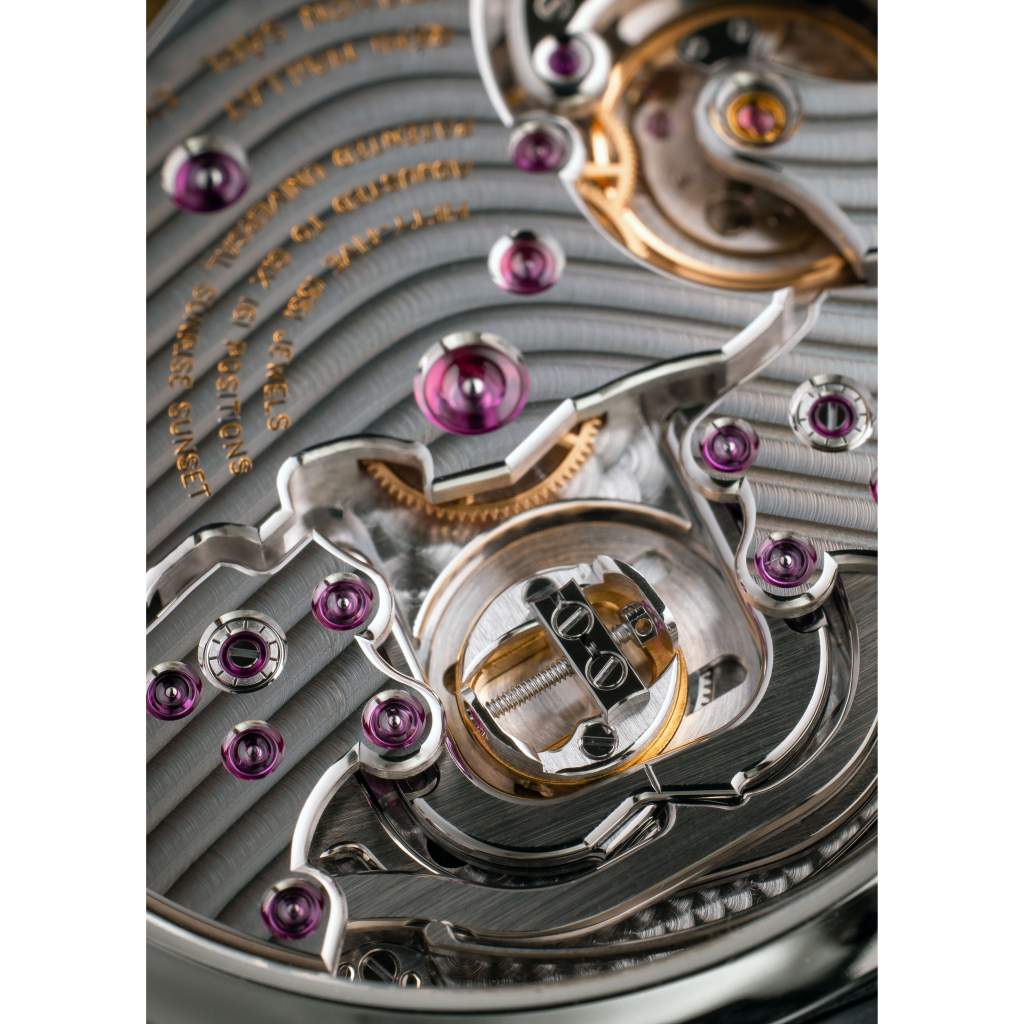 A personal ephemeris on your wrist

What if you could tell the exact time of sunrise or sunset at any location on the planet? Wherever you happen to be – or imagine yourself to be. Truly anywhere. Once again, Krayon introduces a first in watchmaking: Anywhere – where time marks our relationship with Earth.

Krayon's second watchmaking creation, Anywhere, indicates the length of the day and the time at which the sun rises and sets. Krayon unveils a new interpretation of its hallmark complication, with the degree of hand finishing expected in the world of Haute Horlogerie. Anywhere defines a customised geographical and temporal space. In this way, Krayon adapts itself to the desires and deeply intimate secrets of the wearer. A reconnection with the primeval rhythms of nature.

Time is something intrinsically personal. For watchmakers, however, it is above all a dimension of space that can be measured objectively. Krayon Anywhere unites these two aspects through the complication that is its raison d'être: the moment when day and night transition from one to the other, the time of sunrise and the time of sunset.

Time, so personal and natural.

By providing this information, Krayon Anywhere is a watchmaker’s answer to a philosophical challenge. What makes it so singular? The watch displays the ephemeris, more precisely the time of sunrise and sunset, at any point on the globe chosen by its wearer. It can be the wearer’s location at that precise moment, the place of birth, the location where loved ones wait, the place where dreams are made or remembered. It can be Anywhere.

These moments and places that matter are never recorded on a standardised watch, or even by a classic complication. These essentials are personal information, defined in the circle of relations and personal memory, never before given such a deeper meaning by a watch.

When the sun rises or sets is a decisive moment of the day. When nature awakens at dawn, or prepares for rest at dusk, when it comes closest to its pristine state and allows itself to be approached. It is the time when animals drink, fish feed and predators hunt. It is the time of our connection with Earth.

This emotional dimension of time and space, at the intersection of an intimate yet concrete landscape, is Krayon's vocation. This watchmaker’s interpretation of time takes the form of a timekeeper that goes beyond conventions and habits. It is like each morning and evening, never identical, always lived in a personal way. Anywhere's large peripheral ring separates the day into two sections, joining its own rhythm to the wearer's life rhythm. As the day evolves, its length and colour change, and with them the face of the watch.

Watches with universal time or astronomical indications impose specific cities, chosen by arbitrary conventions deeply ingrained in watchmaking custom. Anywhere by Krayon takes the opposite tack, espousing the unique vision, aspirations and dreams of its wearer. It is the logical progression from Everywhere, a ‘hypercomplication’ capable of indicating the time of sunset and sunrise anywhere in the world – it was awarded the Innovation Prize at the Grand Prix d'Horlogerie de Genève (GPHG) in 2018. Anywhere, building on the same patent, goes to the core of a personal ephemeris.

Krayon’s Anywhere indicates the hours and minutes with dedicated hands, placed in the centre of a dial that seems suspended at the heart of the watch. It is surrounded by an annular zone upon which a small sun circulates in perpetual motion, indicating the time over 24 hours. The annular zone has two sectors: day (sky blue) and night (dark blue). The respective lengths of the sectors constantly change, indicating by their position the sunrise and sunset times that can be read from the fixed indicator ring.

These periods are intimately linked to latitude. The North-South position determines the length of the day, which is equal to the night at the equator and gradually expands towards the white night near the Arctic Circle. To integrate this geographical factor, Krayon devised a mechanical positioning system based on racks and yokes rather than a fixed, complex and not very cost-efficient cam. At the customer's request, a Krayon watchmaker will make a simple adjustment to the movement, as often as desired.

The relative position of the two sapphire discs is determined not only by the reference position, but also by the calendar. To do this, Krayon Anywhere indicates the date and month with a hand-counter at 6 o'clock. It is a simple calendar, for which every month lasts 31 days. It requires only five quick, straightforward annual adjustments, which can be made directly with the crown and in both directions.

A concept all its own, full of meaning and aesthetic details, the design of Krayon’s Anywhere is implicitly linked to the nature of its functionality.

Anywhere by Krayon is an ideal of beauty, a marriage of pure elegance, legibility and technical sophistication in 432 components. The second opus in a family of unusual ‘hypercomplications’, Anywhere is the natural next step from Everywhere, and at the same its opposite. Seemingly simpler, not only in its appearance, but in its use as well, more balanced. Anywhere means freedom. After all, no place is more important than where you are now, where your eyes and thoughts roam, where your memory or your heart takes you.

Anywhere is available in two interpretations: one in white gold, with blue the dominating colour; the other in 18K rose gold, with creamy white the dominant tone. The elegant shape of the 39 mm diameter case is highlighted by a flange along the bezel’s underside and over the back cover. The hollow thus created further emphasises how thin the case is. With a thickness of just 9 mm, Krayon’s Anywhere is eminently wearable. The gadroon on the applied, subtly plunging lugs further accentuates their slimness.

In both versions, the dial shows the same motif as on Everywhere, the result of an extensive search for an aesthetic, and it is echoed on the face of the crown. What you see is an orb with parallels and meridians, imaginary longitudes and latitudes, an apt symbol for the global reach of Krayon's complications. The vanishing point is centred on the date at 6 o'clock. This symbolic pole is composed of two azure zones. The hour markers are distinctive, pyramid-shaped appliques with a triangular base, identical in shape to the Y in Krayon’s identity.

Greatest care was given to the day and night discs. The two rings are cut from sapphire. One is hand-painted in dark blue, the other in sky blue. On the former, Super-Luminova™ stars stand out in the firmament. High above, the sun follows its course. Each one of its rays is unique, painstakingly finished in a subtle diamond-cutting process that is technically quite complex. Beyond the discs, the inclined and colour-coordinated fixed indicator ring serves as a 24-hour scale.

As with Everywhere, the Anywhere calibre was also meticulously conceived and constructed by Rémi Maillat, watchmaker and founder of Krayon. It is a new movement, dedicated and designed for Anywhere, offering a power reserve of 72 hours. Of a certain width to accommodate both day and night discs, it is very thin in view of its complexity: At only 5 mm, it allows a case thickness of just 9 mm.

The regulating mechanism for the day and night discs is located at 6 o'clock. Immediately setting the Anywhere movement apart from all others, it shows the intricacy of racks and yokes, with a distinctive screw system in the centre. On either side, two discreet screws facilitate adjustment by the watchmaker.

It is a hand-wound calibre, designed in the tradition of classic movements. Its barrel is coupled to an elegant ratchet click. All perforations are countersunk. The shape of the bridges is particularly adorned, made of solid and fine lines, an inviting canvas for the art of manual bevelling. The numerous hand-worked inward and outward angles establish Anywhere on a par with the finest of contemporary executions.

More than a watchmaker, Rémi Maillat, founder of Krayon, is a watch design engineer. His is a precious talent: the ability to materialise mathematical calculations into fantastic watchmaking creations. With disconcerting simplicity. Whether it is to realise the aspirations of discerning clients or to give substance to his own imagination, this gifted engineer truly masters the technical complexities of the art of watchmaking. For him, a workable concept that will keep its promise can be sketched out with a pencil.

In 2017, Rémi Maillat presented Everywhere, his first creation. A year later, he followed up with the custom-made, Everywhere Horizon, which won the Best Watchmaking Innovation of the Year award at the 2018 Grand Prix d’Horlogerie de Genève.

On land and at sea, it is the sun's course through the sky that denotes the passage of time – and allows it to be measured. Krayon's approach was born from a dream: a mechanical movement, adjustable by hand, that would make it possible to read the time of sunrise and sunset at any point on the globe. It has become reality by succeeding in a challenge never before achieved in watchmaking: a universal mechanical calculator of the exact time of sunrise and sunset.

As a designer cum engineer, Rémi Maillat is inhabited by the particular spark that drives true creators. Everyday experiences still push him to imagine new watchmaking solutions. Nature never ceases to inspire him, especially when he can practise his passions – other than watchmaking – such as scuba diving and freediving. It was, actually, the fact of getting up too early one morning to explore the seabed that gave him the idea of a watch with a universal sunrise and sunset function... In Rémi Maillat's hands, mathematical abstraction becomes an instrument, like a draftsman’s pen, for developing new and useful complications. Today's watchmaker in the truest sense of the word.

Rémi Maillat presents his new opus, faithful to the concept of the art of the singular measurement of time. A marvellous synthesis of mathematics, artistic watchmaking creation, the poetry of details and a truly philosophical dimension.