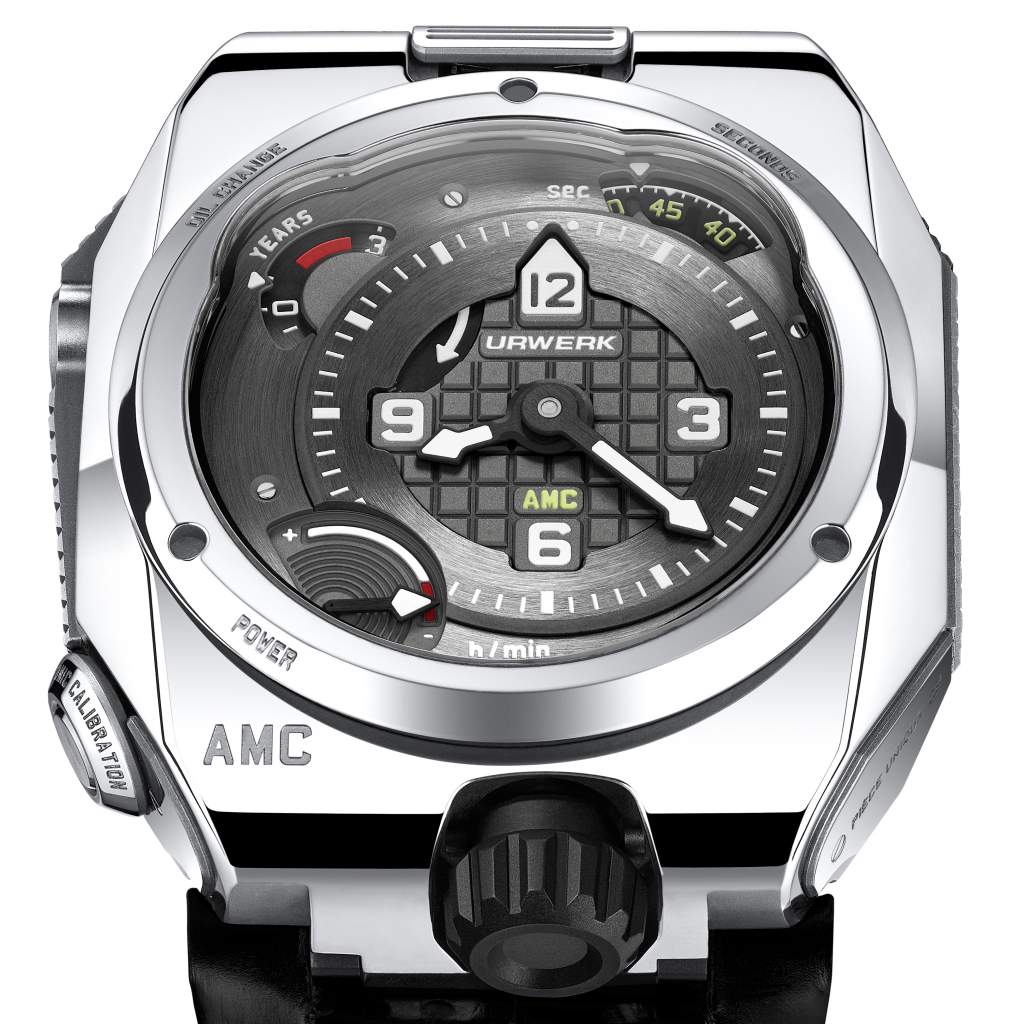 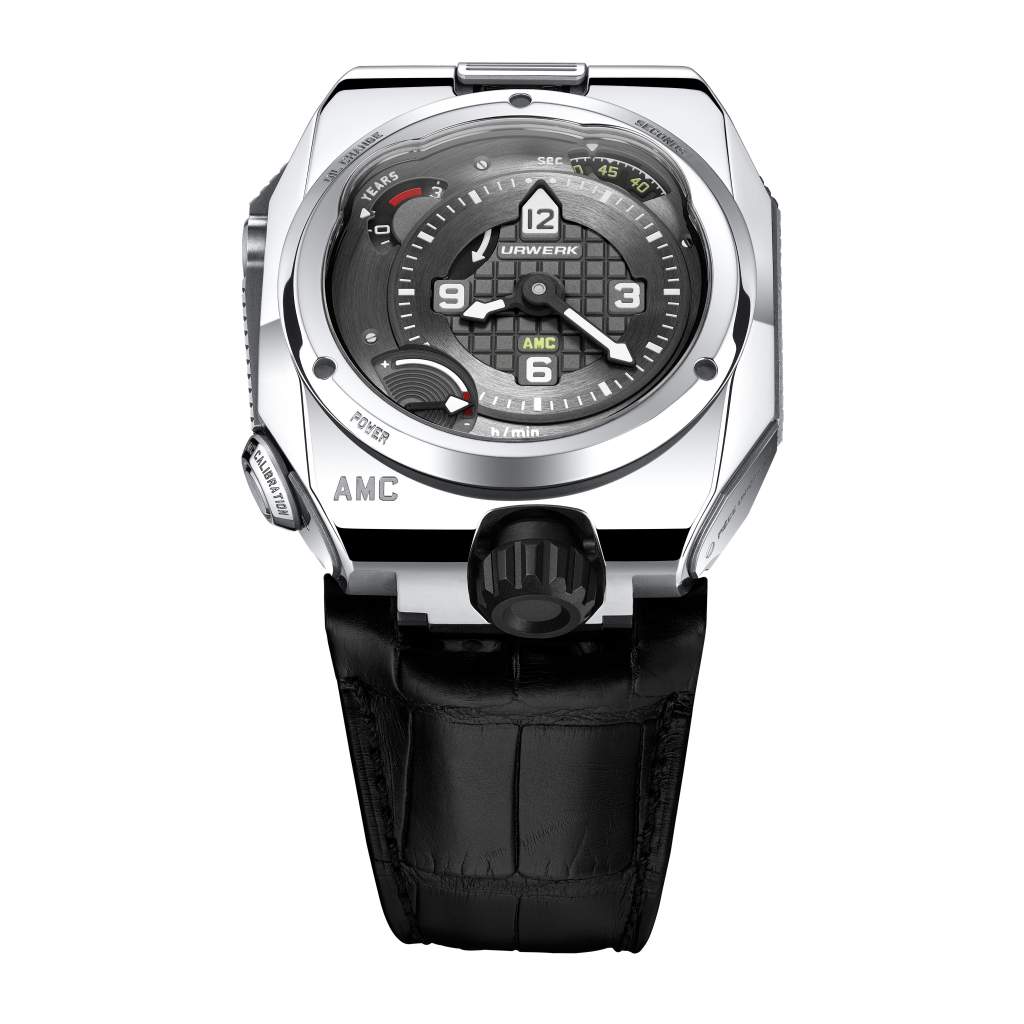 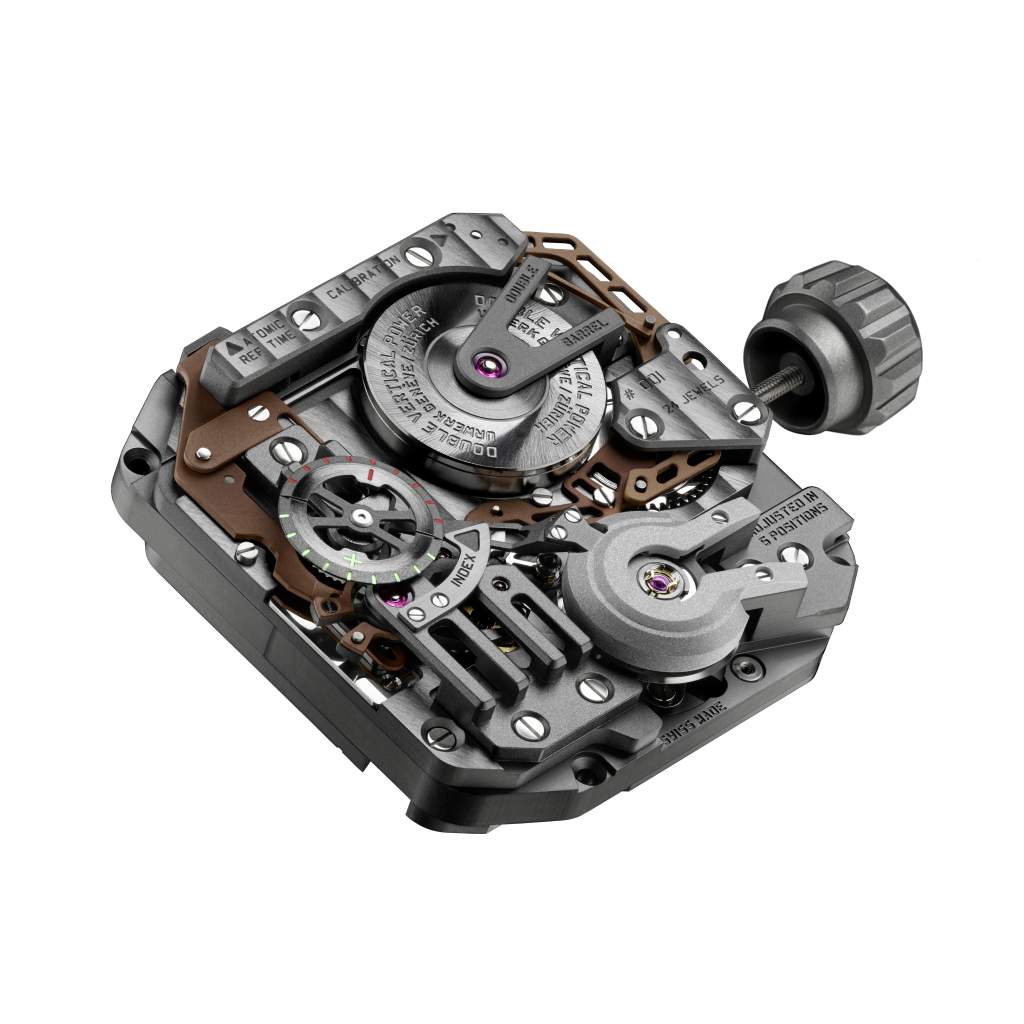 A world first in the history of watchmaking

In creating the AMC clock and watch, URWERK has created a physical marriage between two approaches to chronometry. AMC is not just a fascinating combination of atomic, and mechanical systems; it brings together the two branches of watchmaking in one hybrid device, successfully bridging an existential chasm that has divided horology since the creation of the first piezoelectric oscillator.

The AMC clock and watch are unique in the history of horology. Each represents in its own way, the peak of evolution of a particular approach to keeping time. And when paired, this duet turns out to be indomitable. The 100% mechanical timepiece engineered, developed and machined in URWERK ateliers merges with the atomic clock representing the cutting edge of modern timekeeping technology. An ex-machina dialogue starts and the rest is pure magic …

The URWERK AMC is a hybrid timekeeping construction that consists of two autonomous, but linked, systems. The first part – the Atomolith - is a fixed base unit, a 35kg aluminium-housed atomic clock with roughly the same dimensions as a mid-sized computer tower. The second part is a mobile unit, a purely mechanical watch that can be worn on the wrist or securely docked within the base unit.

When worn, the accuracy of the mobile unit is dictated by its 4Hz (28,800vph) mechanical oscillator and the conditions it is subjected to. When docked, the mobile unit is synchronised with its base unit, via a complex and ingenious system that senses any timing discrepancy between the two and chronometrically aligns the mechanical movement of the wristwatch with the high-accuracy atomic clock.

Docking the wristwatch not only corrects the time display, it also adjusts the mechanical oscillator within to beat more accurately, compensating for any minute changes in temperature, air pressure or humidity. These micro-adjustments, when performed regularly, have the effect of a pacemaker on the heart of the mechanical movement. Over time, its chronometric performance becomes merged with that of the atomic clock.

The watch, like the atomic clock, is a novel construction and is designed specifically for the AMC project. It includes typical URWERK features such as the power reserve indicator and two stacked barrels for a power reserve of four days. The watch also has URWERK’s Oil Change Indicator, which shows when the movement should be serviced. One full rotation of the oil change indicator will take more than four years, with a recommended service after three and a half years of operation.

However its most ingenious features, though unseen to the unaided eye, are revealed upon close examination of the movement. The watch was design to fit on and work with its base unit — an atomic clock also conceived and developed in URWERK’s workshops. This unite base will rewind the URWERK wristwatch, set it to the correct time and if necessary adjust its rate.

The atomic clock interacts with the mechanical watch in three ways.

The first, and perhaps the most challenging technically, involves regulating the rate of the watch. When the mobile unit is docked with its base unit, there is a synchronisation option that sets the time of the mechanical wristwatch according to the atomic clock and regulates the mechanical oscillator.

The rate of a watch is controlled by the regulator. The regulator usually takes the form of a so-called index, which controls the effective length of the balance spring. If a watch is found by the owner to be running too fast or too slow, the index can be moved to adjust the effective length of the balance spring, to essentially speed up or slow down the rate of the watch.

Here, the base unit activates a pusher on the mobile wristwatch unit, which causes a sensor mechanism within the wristwatch to detect the positive or negative deviation of the mechanical seconds indication from the hyper-accurate atomic clock. This sensor mechanism consists of a pair of callipers that close around a half-moon cam rotating co-axially with the seconds hand. The variable positioning of the calliper jaws around the half-moon cam then causes a connected peg component to move along a preset arc. The peg is directly in contact with the regulating index, and the distance moved by the peg, as determined by the cam-callipers sensor mechanism, changes the effective length — and consequently the oscillating frequency — of the hairspring.

Information and correction are thus transmitted and implemented via this ingenious mechanical solution. The more frequently the AMC is synchronised, the closer the mechanical wristwatch comes to keeping the same rhythms as the atomic clock in the base unit.  When the mobile unit is docked with the base unit, synchronisation can effectively be activated manually up to once every hour. Without manual intervention, the base unit cycles through an automatic programme that synchronises the mobile unit in preset intervals. The timekeeping technology within the atomic clock is exponentially more accurate than a standard quartz movement, with an error margin of 1s in 317 years, compared to the most common quartz oscillators, which can have an error margin of 1s in two days. Balancing daily wear of the wristwatch with regular synchronisation is the key to calibrating the most precise mechanical timekeeping system for the wearer’s unique life habits and activities.

The second operation, which is distinct from the rate adjustment, is the exact synchronization of the minutes and seconds display of the watch with that of the atomic clock.

In contrast to the very unusual mechanism for automatic rate adjustment, the mechanism for synchronizing seconds and minutes will be familiar to anyone who understands how the reset-to-zero mechanism for a chronograph works. The mechanism to set the minutes and seconds, like that for the rate adjustment, is activated by a pusher triggered by the atomic clock .This pusher causes two sprung levers within the wristwatch to press against eccentric heart cams associated with the minutes and seconds hands on the wristwatch time display. These heart cams are calibrated so that when contacted by their levers, they return their associated hands to their respective dial-side zero marks.

The third operation for winding the watch is straightforward: a shaft extending from the base unit acts on the crown to wind the wristwatch when the latter is placed in its cradle at night.

The atomic clock base unit is the time reference of the URWERK AMC system. It is placed in an enclosure measuring 45cm x 30cm x 18cm; it weighs approximately 35 kilos and the case is solid aluminum. The clock, developed in collaboration with SpectraTime, is using ions of rubidium.

This portable atomic clock must contend with factors ranging from temperature change to variations in power supply, and aging of the atomic timing package itself. Even with all of these potential disturbances, however, the AMC atomic clock will keep nearly perfect time – guaranteed to within one second in 317 years.

The execution of the AMC is entirely avant-garde, a product of the 21st century and URWERK co-founder Felix Baumgartner’s ongoing exploration of strengthened mechanical systems via technological hybridisation. Its inspirations, however, come from 18th-century master watchmaker Abraham-Louis Breguet, who many consider the father of modern canonical horology.

Felix explains: “My father, who specializes in precision and decorative clocks from the 17th to the 20th centuries, introduced me to the golden age of horology. It was an age of invention by the great masters of the craft: Berthoud, Leroy, Houriet and Abraham-Louis Breguet. One evening he opened a book to show me a most ingenious clock — Breguet’s Pendule Sympathique. He started telling me the story of this clock, which is like a fairy tale. There were only a handful of them made and they all went to the leading personalities of the era.” The outcome of this inspiration is a marriage of the tradition of mechanical horology, with the most precise timekeeping technology in human history.

Breguet’ sympathique clock systems pioneered the concept of a fixed-position master clock that sets and regulates a portable satellite watch without the involvement of a watchmaker.

He saw his sympathique clock as a way of perfecting the mechanical watch, of bringing its performance that much closer to the best chronometric standards of the day. In creating the AMC, URWERK has taken one of the most innovative and ambitious creations of 18th-century watchmaking and aligned it with the very furthest frontiers of millennial horology.