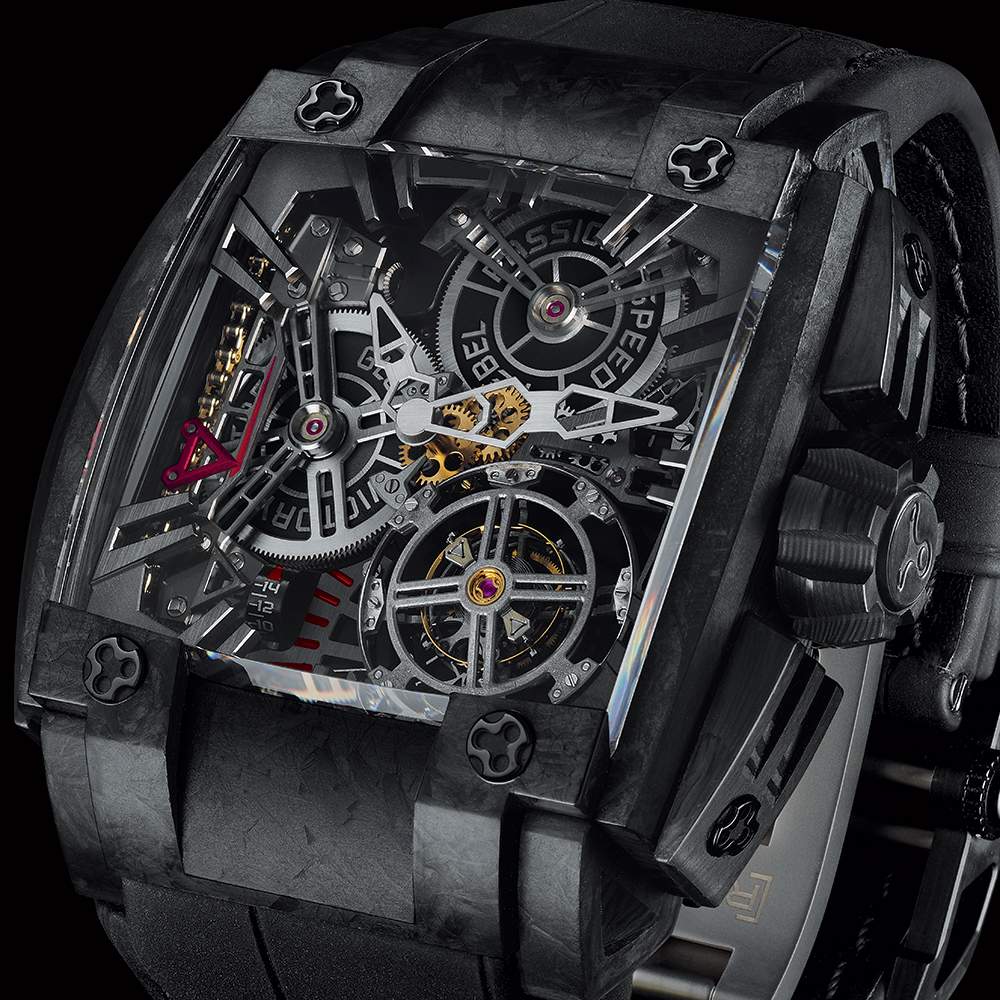 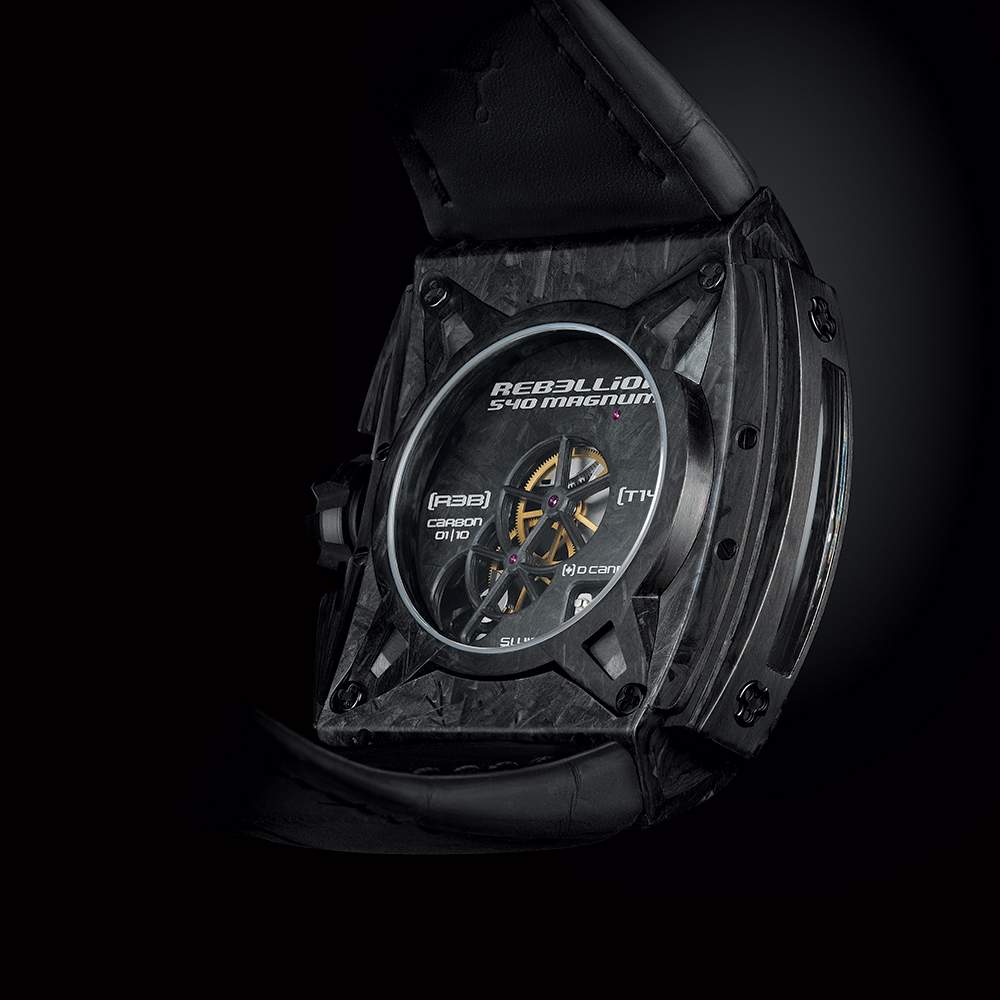 It’s often said that a watch reveals something about its owner. However, a watch also reveals much about the brand that created it.

Rarely has a timepiece reflected its creators’ experience and expertise so appositely as the 540 Magnum Tourbillon by REBELLION. Why? Because it so strongly embodies the Swiss brand’s deep involvement – and success – with Rebellion Racing in endurance car racing.

The 540 Magnum Tourbillon is yet another REBELLION winner, exuding the all-conquering automotive pedigree that the brand has been accruing ever since it rocketed off the starting grid in 2008.

And just like a top-class racing car, through clever design and the harnessing of the latest material technology, the 540 Magnum chassis and shell are engineered to be super lightweight while retaining maximum rigidity.

The T-14 features a large-diameter, ceramicized-magnesium tourbillon cage. The mainplate and ¾ back plate are respectively crafted from aluminum and race-inspired carbon fiber, setting the tone for a cutting-edge sandwich of aluminum and carbon fiber layers throughout the movement. The imposing, almost-square case – constructed modularly in high-tech carbon fiber – is complemented by a race-ready natural rubber strap and bespoke double folding buckle.

REBELLION Timepieces are so into racing that with the 540 Magnum, they are literally and figuratively wearing their heart on their sleeve thanks to the eye-catching openwork dial: The balance wheel – the beating heart of the timepiece – rotates proudly in the raised, crenelated tourbillon cage at 4 o’clock, while the dual mainspring barrels, double braced titanium bridges and gear train – all featuring automotive architecture and motifs – provide a technically rich backdrop to the central skeletonized hour and minute hands, skeletonized retrograde seconds lever to the left of the tourbillon cage at 6 o’clock and two power reserve displays: An at-a-glance bright red arrowhead on the chain at 9 o’clock, plus a precision indicator on a roller at 7 o’clock.

The Rebellion 540 Magnum Tourbillon is a limited edition of 10 pieces with carbon fiber case.

THE 540 MAGNUM IN DETAIL

The top of the T-14 movement forms a stunning technical backdrop to the time indications with their distinctive, black-carbon Super-LumiNova tipped skeletonized hour and minute hands pointing to double-braced ARCAP hour markers. The skeletonized retrograde seconds lever at 6 o’clock, also tipped with black-carbon Super-LumiNova, further enhances the dial-side animation provided by the oversized tourbillon at 4 o’clock.

Each passing day of the 14-day power reserve – its mechanism chain-driven with conical gears for maximum efficiency – is marked by the skeletonized arrowhead in vivid racing red at 9 o’clock. Complementing this at 7 o’clock is a precision power reserve display telling the owner the exact number of days of energy remaining, displayed using a Rebellion signature vertical roller-borne indicator.

Gears can be seen between the tourbillon and relief-engraved mainspring barrels at 12 o’clock and 9 o’clock, both barrels rigidly supported by titanium bridges. The high-tech movement materials – aluminum, ceramicized-magnesium, titanium and carbon fiber – form a smart interplay of dark and light colors.

Overview of the REB T-14 movement

The T-14 movement is a completely original, proprietary movement developed by renowned Swiss movement constructor David Candaux. To ensure that the Magnum fully reflected REBELLION’s competition racing prowess – in terms of materials, design motifs and endurance capacity – David immersed himself in the world of Rebellion Racing, spending time trackside with the Rebellion Racing team, taking notes and photos of their race-proven technology. Then, David, Alexander Pesci (owner of both REBELLION Timepieces and Rebellion Racing) and Steve Clerici (CEO of REBELLION Timepieces), transposed the exciting world of auto sports to the world of watchmaking to create the REB T-14.

Two mainsprings in two barrels generate the 540 Magnum’s massive 14-day power reserve, upholding the REBELLION tradition of timepieces featuring long power reserves. The Magnum’s barrels are connected in series for more constant power to the regulator and improved precision. One barrel is engraved with 'Passion' 'Speed' 'Rebel' and the other 'Extreme' 'Victory' 'Glory’. Words that sum up not only REBELLION’s intimate connection with endurance car racing, but also its ethos of creating contemporary timepieces that challenge the horological establishment.

With its mainplate in aluminum and ¾ back plate in carbon fiber, the 540 Magnum draws clear inspiration from the materials used in the world of racing. The carbon fiber plate supports the gear train from mainspring barrel to the escapement; retrograde seconds mechanism; wheels and pinions for the power reserve; and winding ratchet click, making it nearly as complex as the mainplate itself.

At 36.7mm x 36.7mm x 9mm, the T-14 movement is generously proportioned to fill the case, but it is the clever engineering – a sandwich of high-tech layers – and the astute use of cutting-edge materials that make this caliber exceptionally rigid and lightweight.

The REB T-14 features an extremely large tourbillon – 17.2mm in diameter – floating above the dial, so that its beauty can be fully appreciated. The circumference of the magnesium tourbillon is “540 tenths of a millimeter” (54mm) and it is this value which has given rise to the name of the timepiece – the 540 Magnum.

The tourbillon cage has a distinctive crenelated profile engraved '-REB-T14', with the extra weight that this design would normally entail offset by crafting the cage in magnesium – magnesium has just 66 per cent the density of aluminum. The magnesium here has been subjected to a ‘ceramicization’ process that provides a micro-thin protective coating without affecting the tourbillon dimensions.

Renowned horological designer Eric Giroud designed the 540 Magnum’s case, which boasts virile dimensions (46 mm x 56.7 mm x 19.6 mm) and an oversized, grooved crown. The case band window provides an alternative vista onto the power reserve and its chain, while the choice of resistant, naturally finished carbon fiber – with visible, fibrous strands – is another evident nod towards to the realm of racing cars.