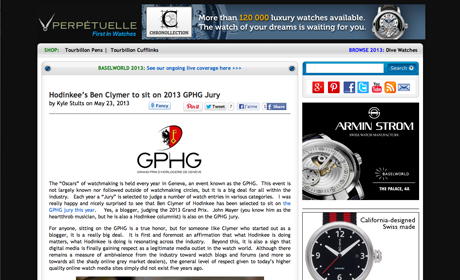 The “Oscars” of watchmaking is held every year in Geneva, an event known as the GPHG. This event is not largely known nor followed outside of watchmaking circles, but it is a big deal for all within the industry. Each year a “Jury” is selected to judge a number of watch entries in various categories. I was really happy and nicely surprised to see that Ben Clymer of Hodinkee has been selected to sit on the GPHG jury this year. Yes, a blogger, judging the 2013 Grand Prix. John Mayer (you know him as the heartthrob musician, but he is also a Hodinkee columnist) is also on the GPHG jury. For anyone, sitting on the GPHG is a true honor, but for someone like Clymer who started out as a blogger, it is a really big deal. It is first and foremost an affirmation that what Hodinkee is doing matters, what Hodinkee is doing is resonating across the industry. Beyond this, it is also a sign that digital media is finally gaining respect as a legitimate media outlet in the watch world. Although there remains a measure of ambivalence from the industry toward watch blogs and forums (and more so towards all the shady online grey market dealers), the general level of respect given to today’s higher quality online watch media sites simply did not exist five years ago. Although there is a huge range of quality in the online world (it’s the nature of the beast), I think that the emergence of a handful of high quality blogs within the last five or so years — curating high quality content and providing informed, independent opinions of value to watch enthusiasts and collectors — not only raised the bar on the quality of forum content (which itself still varies widely) but really legitimized digital media coverage of the watchmaking industry. It is nice to see that those who rise to the top are given their due respect. From one “blogger” to another — Congrats Ben, congrats Hodinkee. Keep up the good work