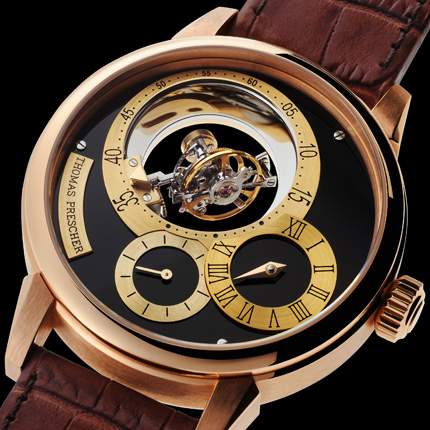 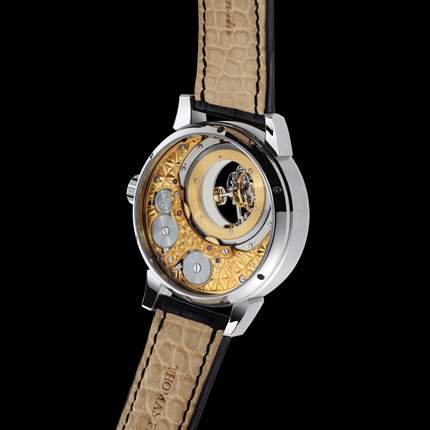 <p><strong>Presenting the Triple Axis Tourbillon Regulator <br/>The world's only triple-axis flying tourbillon wristwatch</strong></p><p>A triple-axis tourbillon is extremely rare; a triple-axis tourbillon wristwatch even more so. However, Thomas Prescher's triple-axis flying tourbillon is not simply extremely rare – it is absolutely unique. <br/><br/>Prescher's Triple Axis Tourbillon Regulator features one of the world's most exclusive and most difficult complications to assemble, set to stunning advantage in a jet-black natural onyx dial that contrasts beautifully with the pink-gold case. Regulator-style hours and seconds are each indicated in their own separate sub-dial, while the constantly animated tourbillon tracks the minutes during its one-hour rotation.<br/><br/>Thomas Prescher has both an affinity and a talent for complicated tourbillons: while his classmates were submitting simple movements for their watch at the end of apprenticeship school, Prescher presented a half-flying tourbillon that confirmed his position as the top of the form. In 2003 he presented the world's first pocket watch with a flying double-axis tourbillon. On seeing Prescher's pocket watch, one of his colleagues mentioned that he thought a double-axis tourbillon was impossible in the constrained space of a wristwatch. Prescher not only met but surpassed the challenge a year later with a wristwatch trilogy of single-axis, double-axis and triple-axis tourbillons.<br/><br/>At this extreme level of micro-mechanical sophistication and miniaturisation, watchmaking ceases to be about timekeeping and becomes pure art. Or perhaps that should read "arts", because we have both the sublime static beauty of a fine painting in the harmonious forms and colours, as well as the graceful movements of the ballerina in the whorled path traced by the mesmerizing triple-axis tourbillon dancing apparently weightlessly in space. <br/><br/><strong>“The ultimate goal is to create excitement!”</strong><br/><br/><br/><strong>Why a flying tourbillon?</strong><br/><br/>A normal tourbillon is supported by bridges top and bottom that obstruct a clear view into the tourbillon. Although much more difficult to achieve, Thomas Prescher chose to make his triple-axis tourbillon fully flying, i.e. supported by just one side so that very little impedes visual access to the kinetic ballet of the triple-axis tourbillon. <br/><br/>Further ensuring that absolutely nothing diminishes the pleasure of enjoying the tourbillon in all its beauty, the complex and intricate triple-axis tourbillon mechanism is driven via two conical gears instead of the easier gear-to-gear solution. Thomas Prescher was the first, and is still the only watchmaker to use this system.<br/><br/>The difficulty in supporting anything by just one end is balance. When an object is supported on two sides its equilibrium is not as critical as if it is supported on only one. However, imagine balancing an object moving through not one, not two, but three different planes!<br/><br/><br/><strong>Constant-force mechanism<br/></strong><br/>While the triple-axis tourbillon mechanism, which includes the escapement wheel, pallets, anchor, balance spring and balance wheel, is extremely light in weight – the smallest screw is less than 1/1000th of a gram – it is actually heavy in relation to the amount of energy available. One of the major issues regarding multi-axis tourbillons is ensuring an ample supply of power to the escapement, the mechanism that regulates timekeeping.<br/> <br/>To resolve this problem, Prescher has added a constant-force device inside the tourbillon cage turning around the first axis. This device transmits energy directly to the escapement six times per second, i.e. with every beat of the oscillating balance. The main power train drives the tourbillon and recharges the constant-force spring so that it always has sufficient power on tap for the escapement. The "Jeanneret" constant-force system used requires no energy-sapping levers, but works efficiently using the different inertias of the escapement wheel and tourbillon carriage.</p>