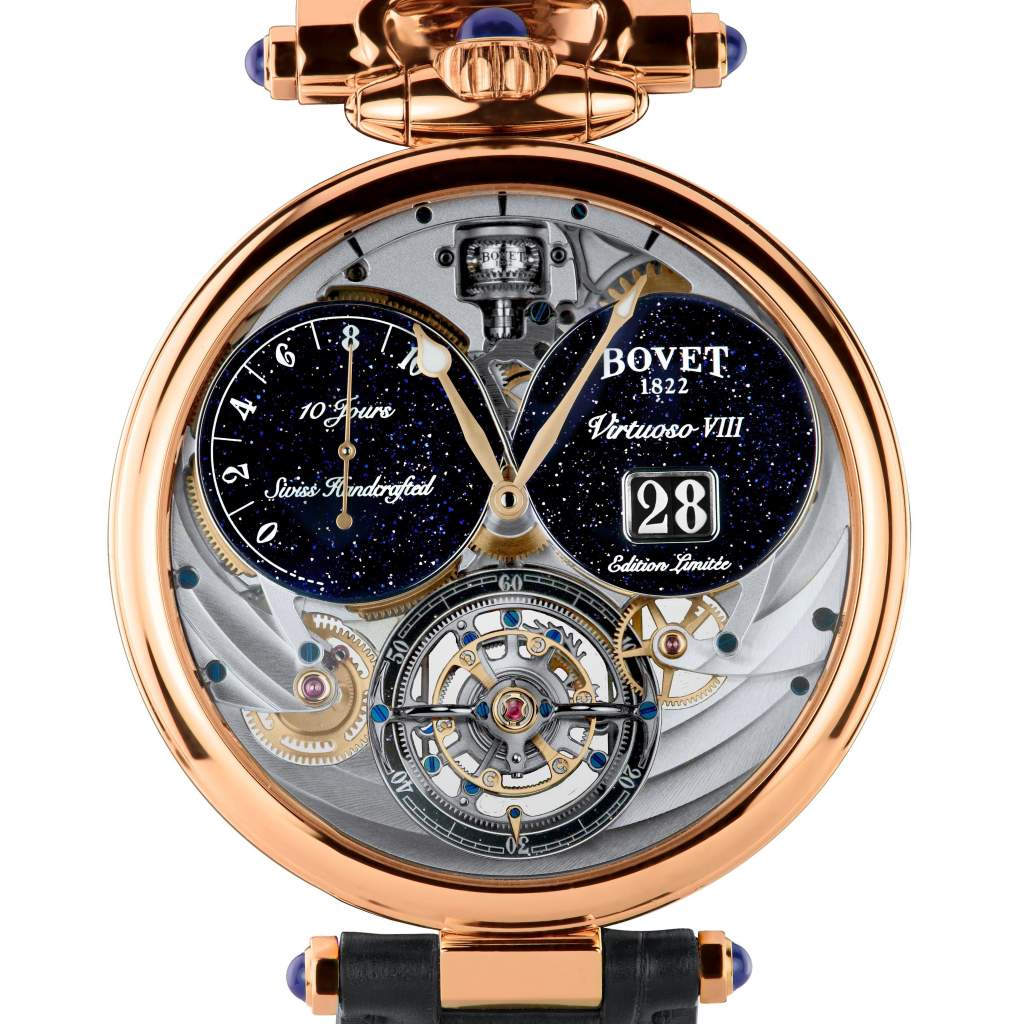 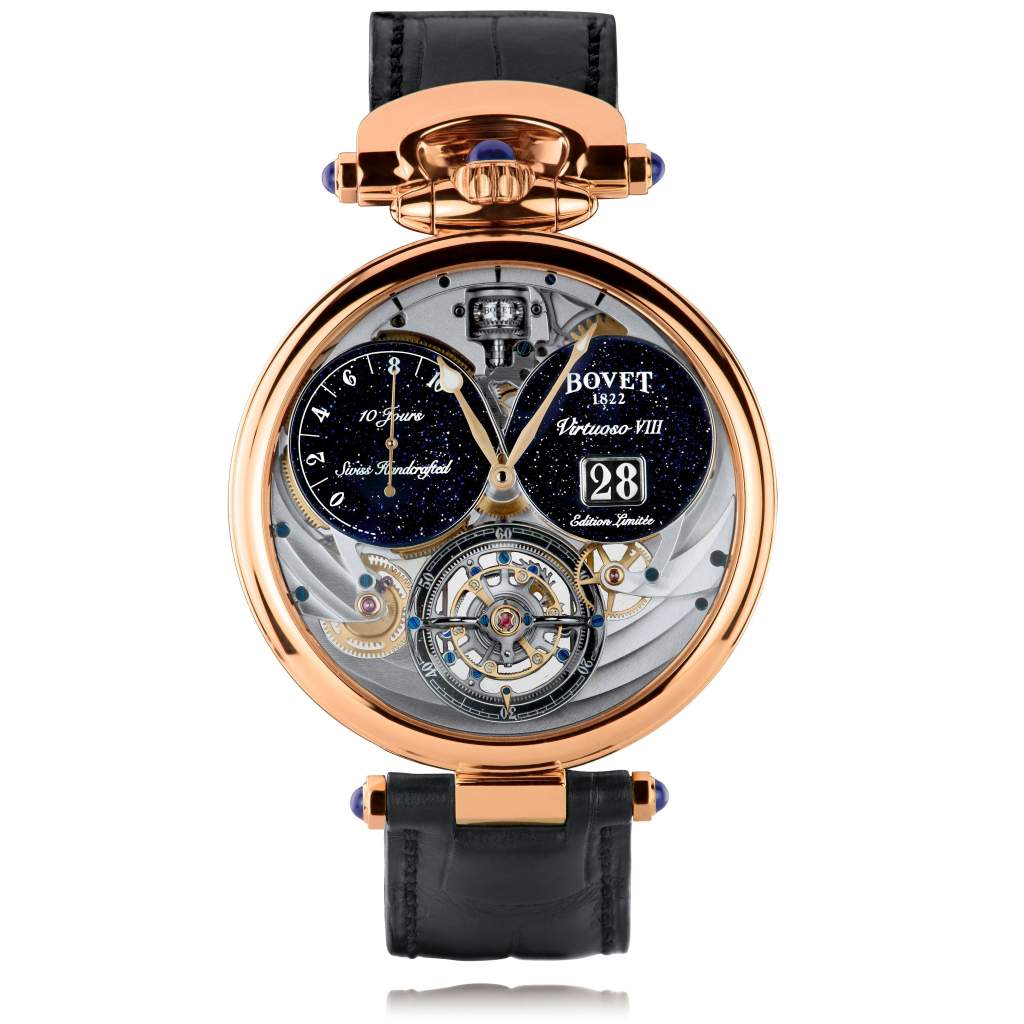 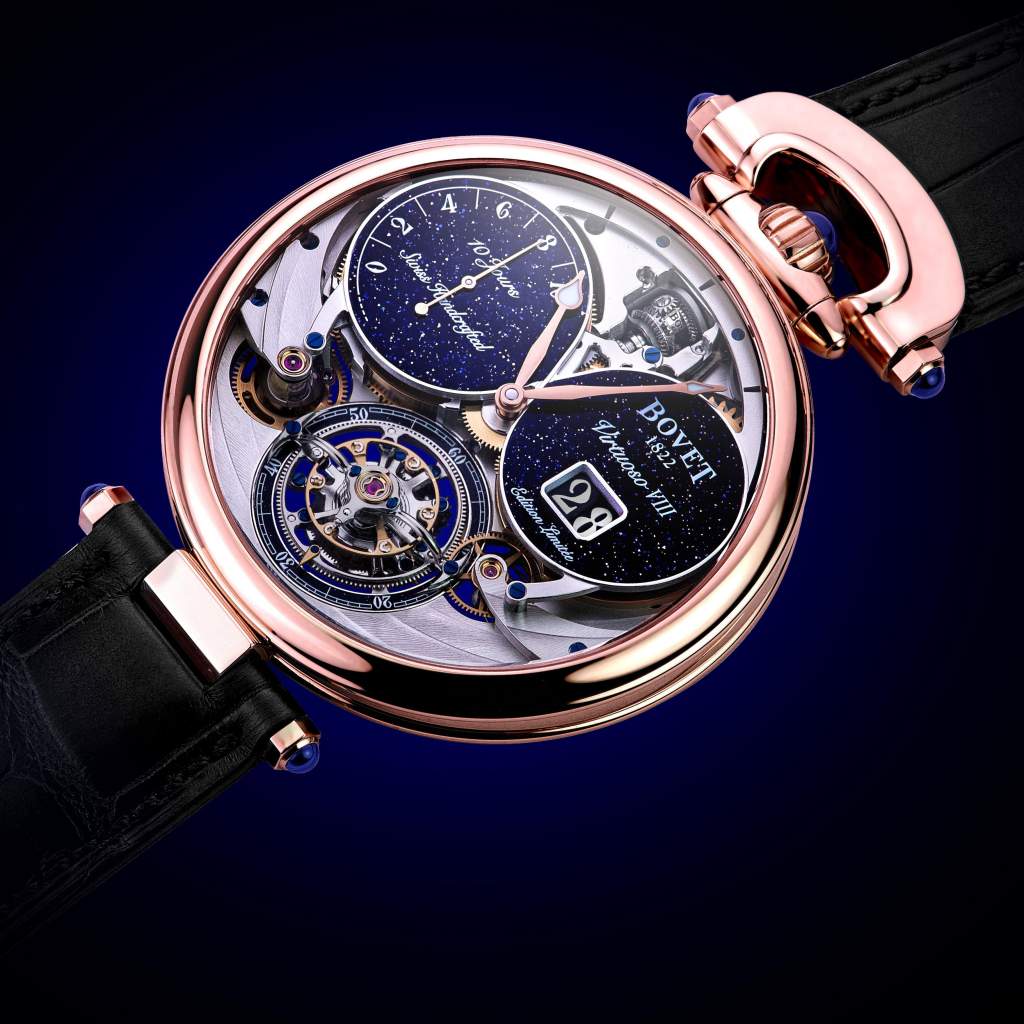 The House of BOVET is delighted to present the second chapter of the iconic Virtuoso VIII tourbillon – the ultimate expression of artisanal watchmaking, decorative arts, mechanical ingenuity, and innovation.

The Virtuoso VIII elegantly blends BOVET’s two iconic cases, the Fleurier and the Dimier since it is the first timepiece in the Fleurier collection to feature an inclined crystal aperture on the 12-6 o’clock axis. This truly innovative concept offers a new perspective on the caliber’s architecture, decoration, and function displays. Both of the plate’s faces feature bridges whose shape immediately remind us of BOVET’s historic pocket watches. The steel is chamfered and polished, the disk plates are sunk and chamfered, and the tourbillon cage bridge is made of titanium to reduce the weight of the cage and prevent any magnetic charge.

For this second chapter, the elegant decoration perfects the timepiece's technical prowess. The two elegant arms over the flying tourbillon are rounded-off and polished, and the surfaces of the bridges on both sides are decorated with a circular “Côtes de Genève” motif. The center of the timepiece invites collectors to drift to the surface of the movement and admire its beating heart, the tourbillon’s powerful spin, and all of its many functionalities that are handcrafted at BOVET’s workshops.

Offered as a limited edition of 50 timepieces, the dial of the Chapter Two was fully redesigned to give the timepiece a new appearance. Offered in blue aventurine glass, the dial forms a horizontal number eight, which in numerology and in multiple cultures symbolizes luck, perfection, and infinity. The timepieces’ symmetry also accentuates the functionality and legibility of the complications it displays, the power reserve indicator and the big date.

For exceptional legibility, the seconds’ display is carefully designed to be displayed by an index screwed onto the cage wheel. The arrow of the index hangs over the surface of the delicate circular dial showing the 60 seconds. The easy, precise readability offered by this display, is remarkable. To achieve this, the seconds' dial must be affixed to the plate during the initial assembly phases, which makes the watchmakers’ work even more delicate when working with aventurine glass. The artisans’ talent, passion, and experience, are expressed with such intensity and harmony that the Virtuoso VIII Chapter Two truly fascinates with its splendor.

It is hard to imagine that a dial with such a diameter, hanging over the big date disks, could allow for such a large display. The space between the units' disk and the hours' disk is reduced to optimize readability, making it available regardless of what dial is selected. The watchmakers also did not forget the date correction, which does not even require removing the timepiece from one’s wrist, and is performed simply by pressing down on the crown. The rapid date corrector and iconic 12 o’clock positioning of the crown, in addition to the positioning of the Fleurier bow cases, effectively avoid any accidental date correction.

The movement that drives this exceptional timepiece meets BOVET’s demanding criteria of chronometry, reliability, and expression. It draws its energy from a single barrel that ensures more than ten days of power reserve, all while maintaining the balance wheel's oscillations at 18,000 vph.

The patented two-sided flying tourbillon's new construction shows its chronometric assets, as it regulates this timepiece. Its attachment point at the center of its axis and distribution on either side of the escapement and balance-spring, drastically reduces the lever-arm effect and friction at the pivot point.

To further improve the performance of this tourbillon, the House's artisans chose a variable-inertia balance wheel. Six collets driven into the felly of the balance wheel create a perfectly precise and dynamic balance and setting. The hairspring, with its curved end, was designed for this caliber and balance wheel. It is fixed to the tourbillon bridge by double-ended mobile stud support. The artisanal finish of the mobiles, traditional burnishing of the pivots, and hobbing of the teeth using traditional artisanal methods, also help further improve the chronometric performance of the Virtuoso VIII Chapter Two’s caliber.

Finally, the power reserve of over ten days, provided by a single barrel, would require meticulous winding if not for the spherical differential winding system. The application of this ingenious mechanism and the multi-gear three-dimensional teeth of one of its pinions, have received two patents. Because of this differential winding system, the number of crown turns needed for full winding of the spring is halved without increasing friction and forces exerted on the gears.

The Virtuoso VIII Chapter Two expresses BOVET’s quintessential values, as it simultaneously gathers the artisans' dedication, passion, respect for tradition, and attention to detail – the hallmarks of exquisite and unparalleled fine watchmaking.

About the House of Bovet

For nearly 200 years, the House of Bovet has handcrafted the finest timepieces. This year, to further ensure Bovet’s excellence, Mr. Pascal Raffy has limited the House’s annual production to 800 handcrafted timepieces, making all components in-house, respecting Swiss artisanal processes, and restating his commitment to exclusivity and uniqueness.