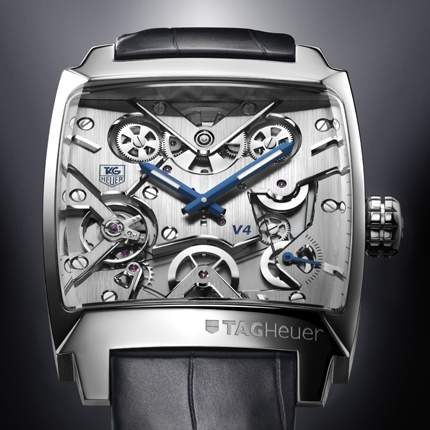 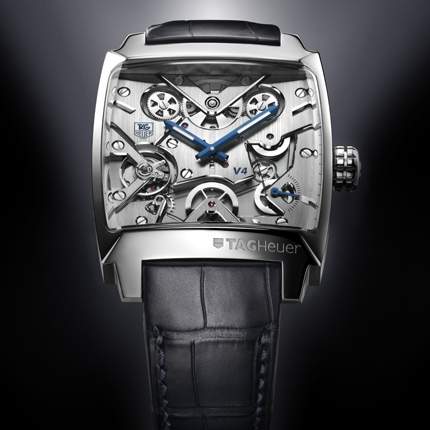 The Monaco V4, in its platinum version, embodies a revolutionary step forward in the evolution of TAG Heuer's iconic square-faced series: the Monaco – the first audacious chronograph seen on Steve Mcqueen's wrist in the film classic Le Mans, shot in 1970. Following the purest watchmaking tradition, this timepiece's movement appears as a complete technological break never before matched. The V4 movement replaces the pinions of the traditional mechanical movement with a relay of 5 notched belts whose tension is controlled by two turnbuckles, and oscillates at 28,800 vibrations like its ancestors. The winding system also presents a unique feature: a linear mass shaped as a tungstene ingot. The mass does not rotate about an axis anymore, but goes up and down along a circuit built in-between 4 V-shaped barrels inclined at 13°, echoing the most impressive racecar engines. The audacious look of the Monaco V4 matches the revolutionary movement it houses. The beveled sapphire glass, manufactured in 3-d, curves down to join the sides of the polished/fine-brushed platinum 950 case. The small second hand is set at 4 on a dial composed of 7 haute horlogerie hand-finished bridges. This exceptional timepiece comes with a stylish hand-sewn alligator bracelet, with a folding buckle and safety push-buttons in platinum 950.The overall design is inspired by the iconic Monaco, the world's first automatic chronograph with microrotor, created in 1969. 40 years later, the Monaco V4 is bound to disrupt, once again, the watchmaking world.