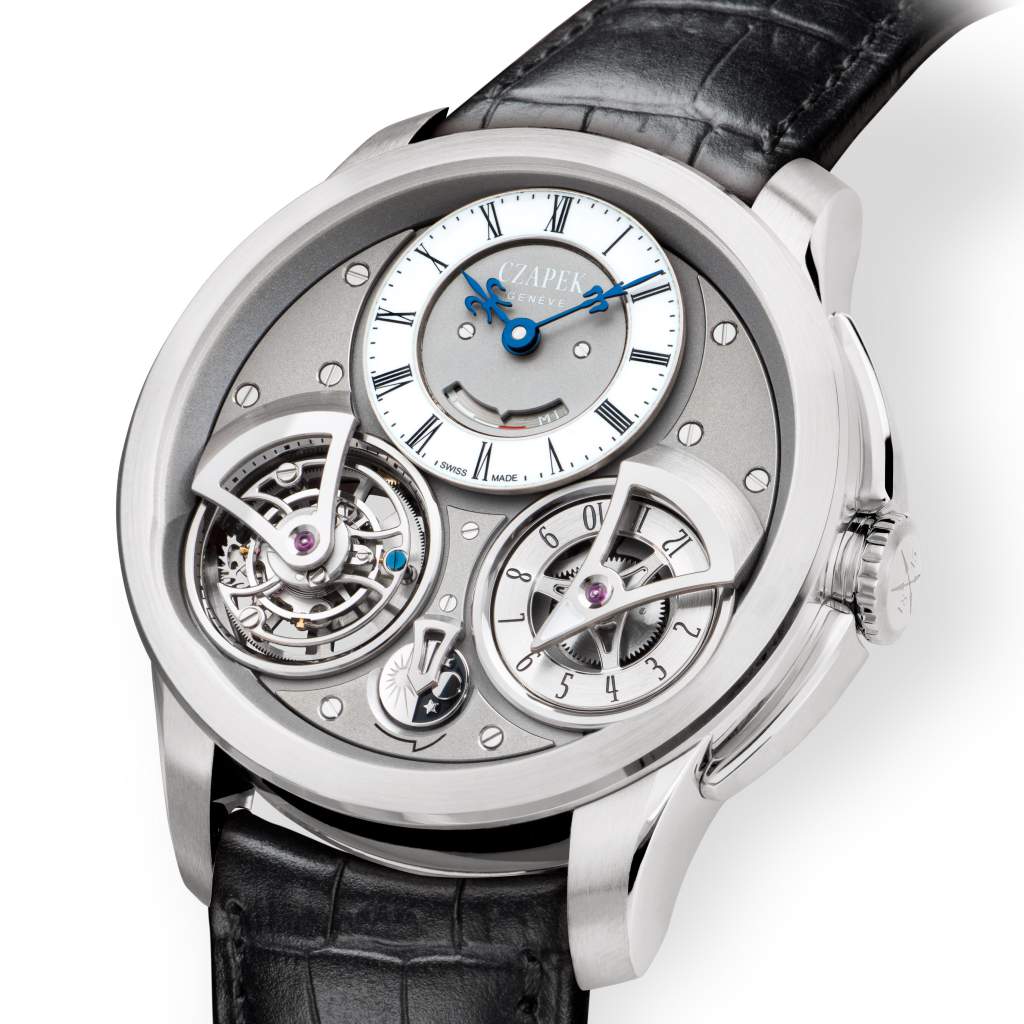 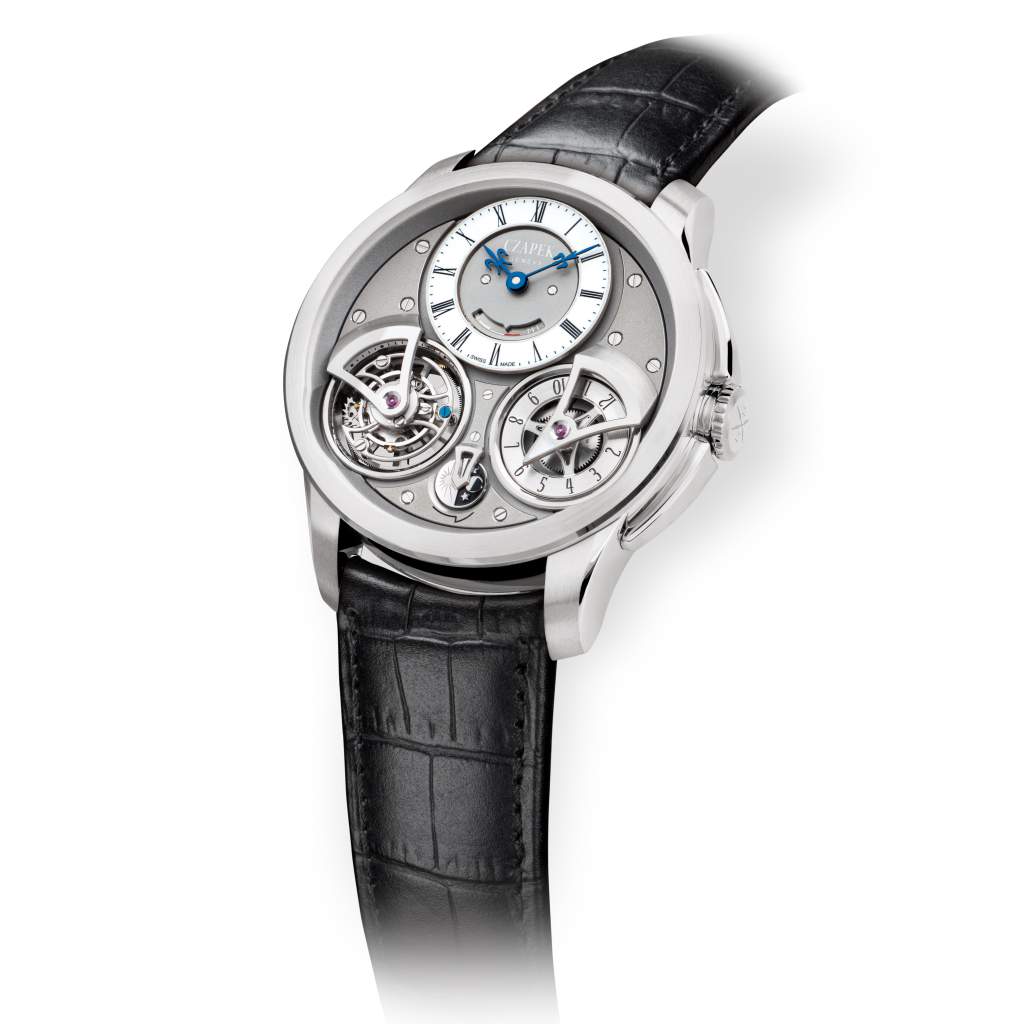 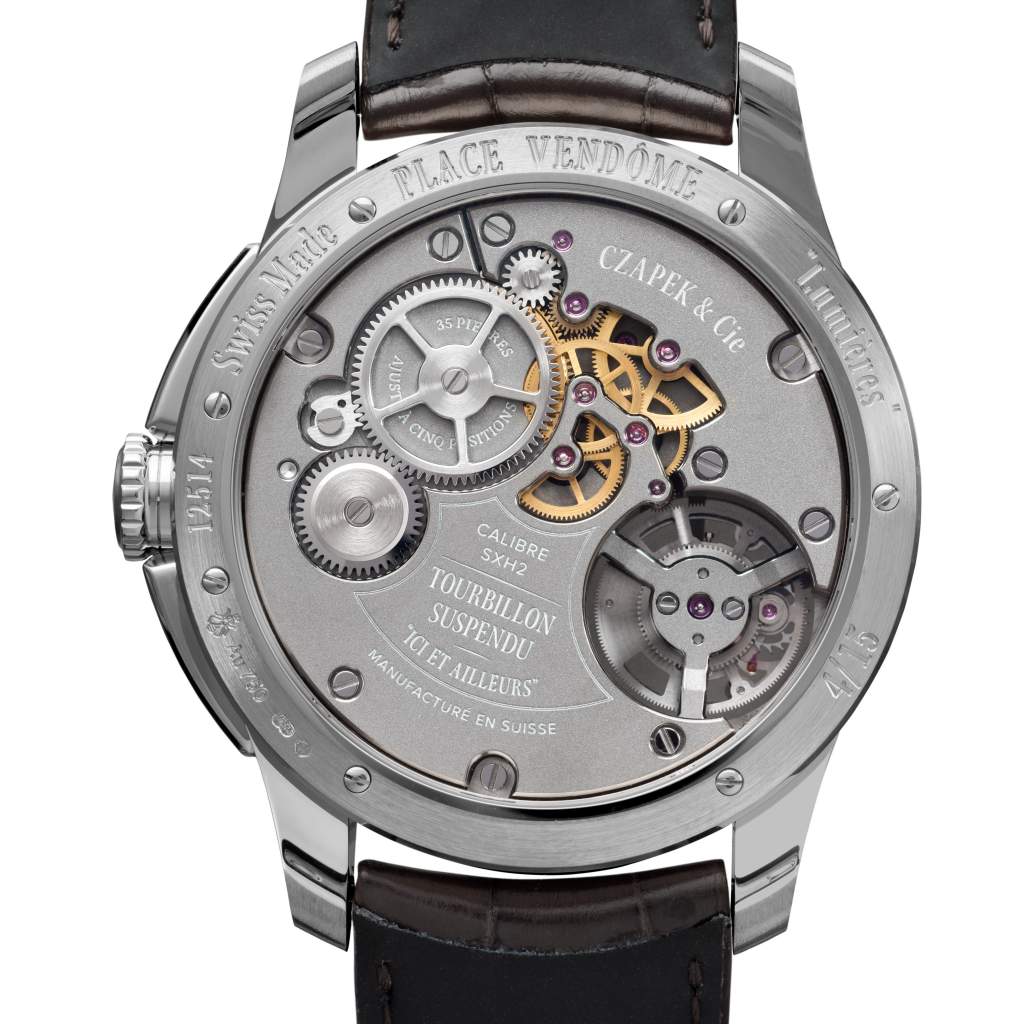 The Place Vendôme Tourbillon Suspendu “Ici et Ailleurs” collection is named after the Parisian square where François Czapek, spiritus rector of the brand, opened a boutique in the mid-19th Century, assumed to be the first fine watchmaking boutique ever on this world-famous square. The limited-edition model in platinum features a one-minute suspended tourbillon, together with a second time zone, a day/night disk – both “trainants” -, and a power reserve indicator. Even with the new functionalities, Czapek lovers will easily recognize the watch's unusual look with the two subdials at 7:30 and 4:30. The characteristic grand-feu enamel of the Quai des Bergues is still used for the dial – this time as a ring in gold “ champlevé“. The Roman numerals are indicating hours and minutes on the ring and the fine “fleur de lys” hands are now joined by an anthracite bead-blasted main plate and suspended bridges of polished steel. Thanks to its modern design and the combination of three complications, this tourbillon blends past, present and future together. It stays loyal to François Czapek’s personality, while embracing the future with its unique style.

The power reserve indicator migrated and now peers out of the clock face at 12 o'clock. A day-night disc turning counter clockwise has inserted itself between the two subdials, which now carry the tourbillon on the left and the second time zone on the right. Particular attention has been put on the day-night disc and the second time zone, with the idea of slightly modernising the traditional indicators of this type of pieces. The hour-adjusting through a push button hidden in the crown protection is an example of how, in Czapek vision, aesthetics and function must be combined.

The Place Vendôme is driven by the proprietary, manually wound SXH2 movement beating at 21,600 vph (3 Hz). The single barrel spring delivers a solid 60 hours of power. The 34.8-millimeter diameter is relatively large, but the height of 9.8 millimetres allows the watch to be discreet and elegant in spite of the many functions. The traditional satin-brushed bridges, circular bevelling, handmade “anglage”, blued screws and open-worked ratchet are back again. In the back of the watch is an inscription: Tourbillon suspendu – Ici et Ailleurs, a reference to the second time zone, a gift to global travellers that Czapek himself never knew.

The Place Vendome is the second step in the Czapek Renaissance. It highlights the travel through time of the brand, from Past to Present and now from Present to Future.