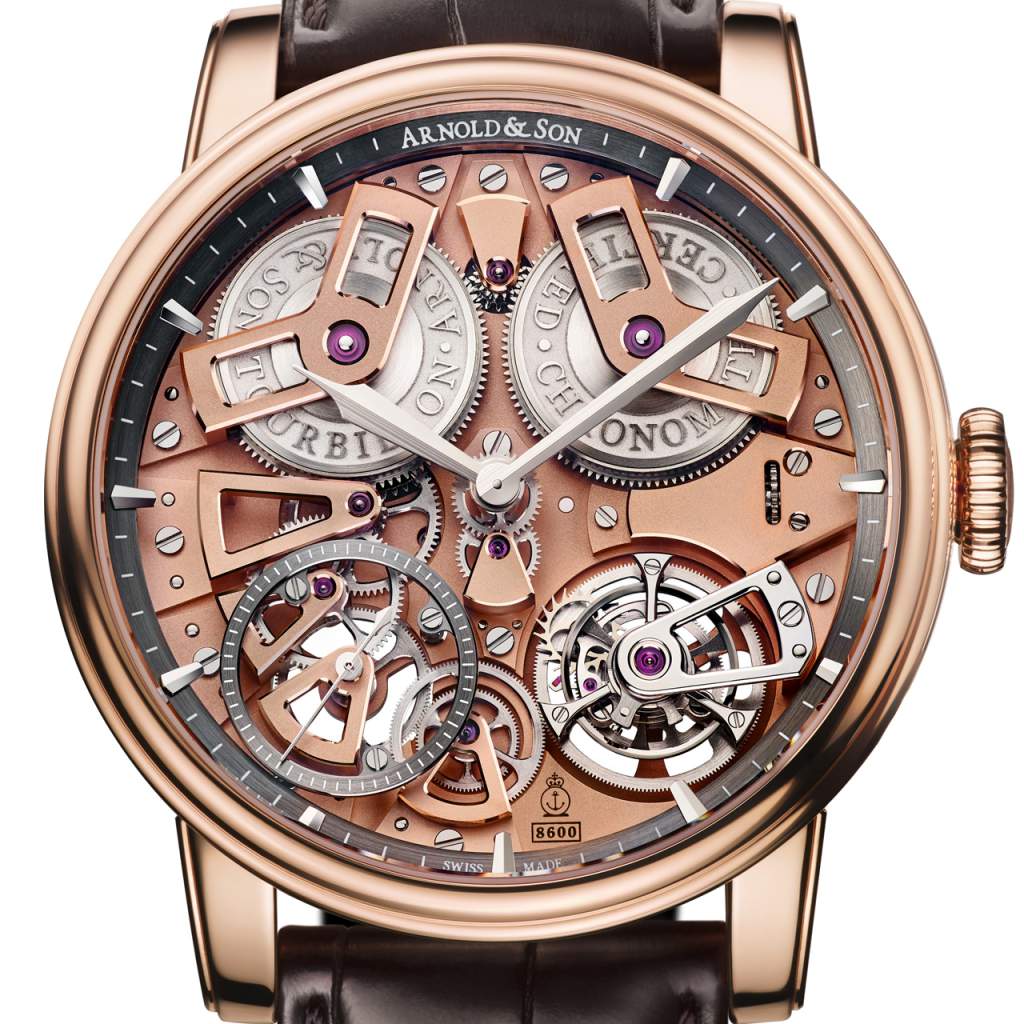 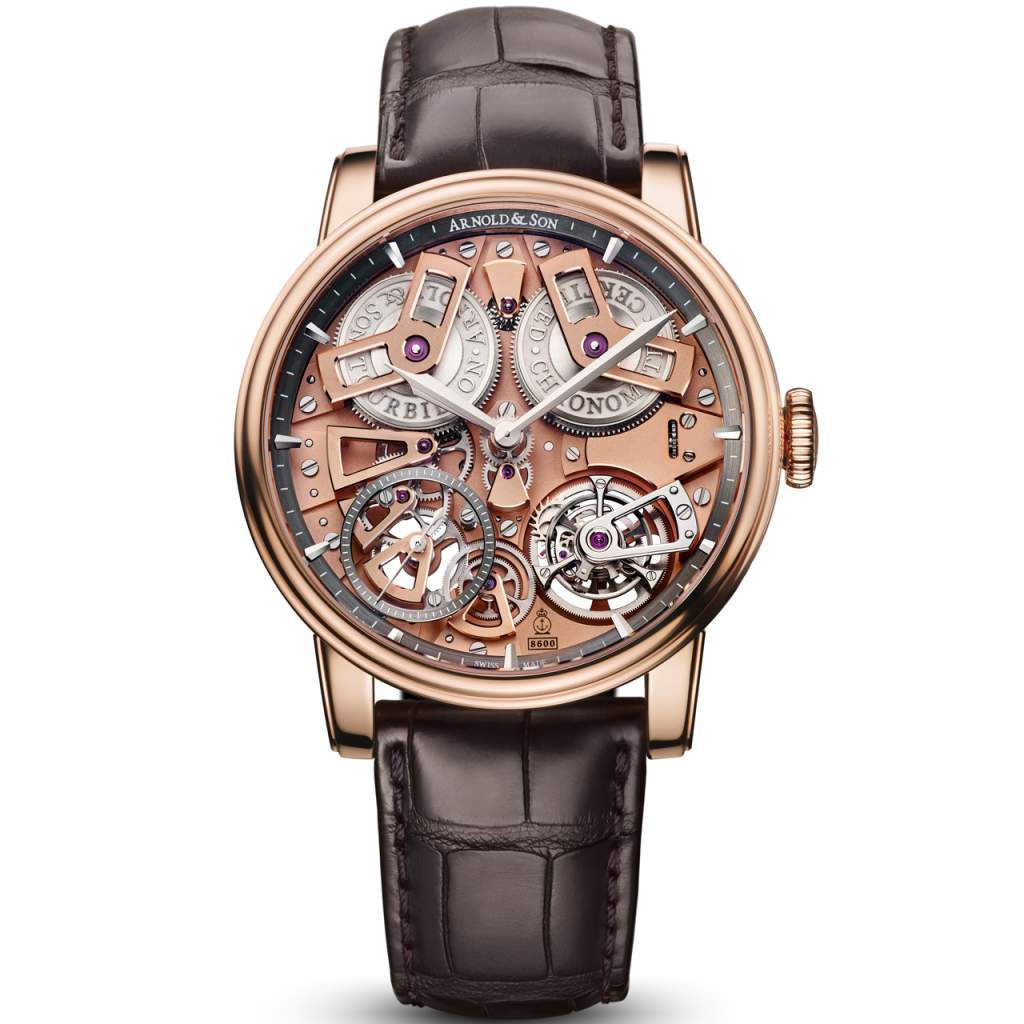 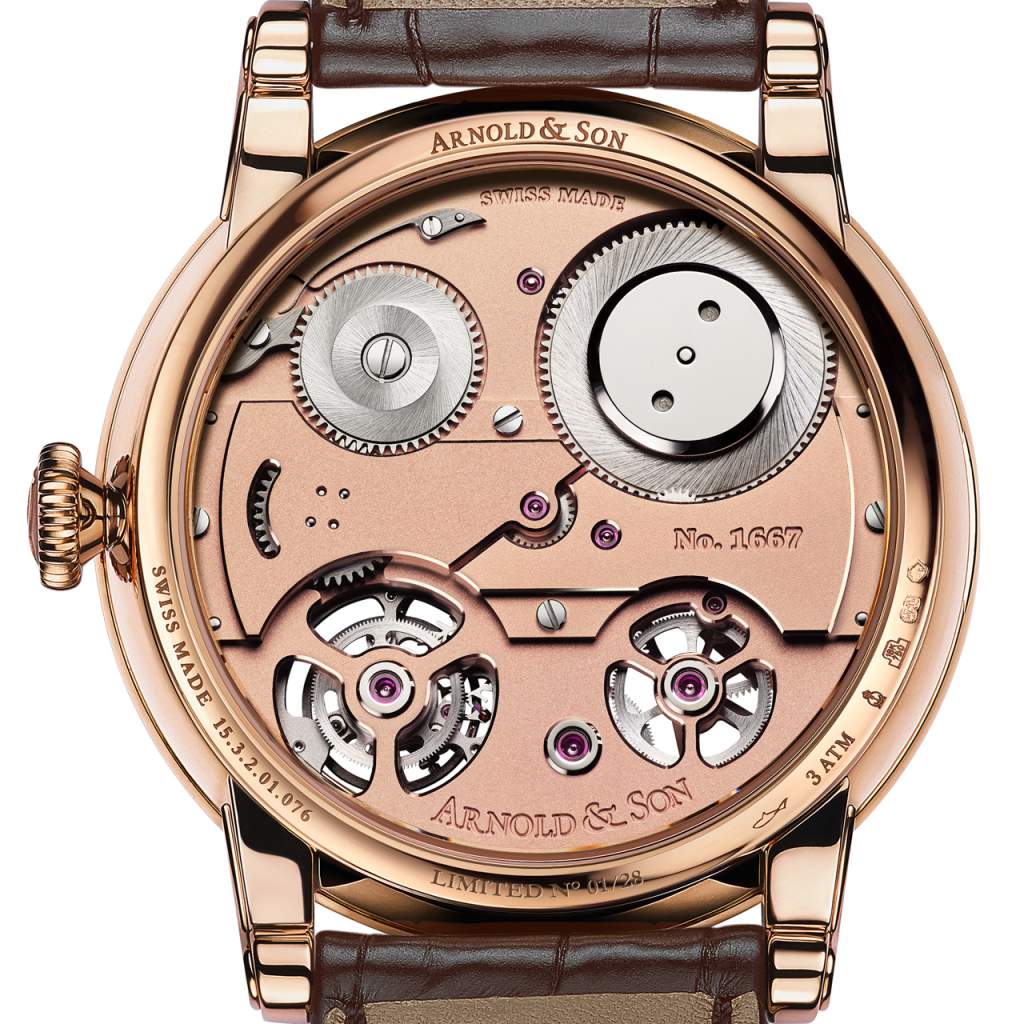 Introducing the Arnold & Son Tourbillon Chronometer No. 36, a modern tribute to the historical high-precision chronometers made by John Arnold.

The John Arnold Chronometer No. 1/36 or “Arnold 36” as it is more commonly called was not only the first pocket watch by John Arnold to use a larger movement with his “T” balance, but also the first to be referred to as a “chronometer” for its superior timekeeping capabilities. In this respect, the Tourbillon Chronometer No. 36 is faithful, contemporary horological homage.

Following the classical codes of traditional English chronometer movements, the main pivoting elements such as the wheels, barrels, the tourbillon, and others are each mounted on their own bridge. The triangular, multilevel bridges (no less than thirteen) are mostly skeletonized, providing a more contemporary sense of three-dimensional depth to the entire timepiece.

The tourbillon, a central element of this timepiece, is highlighted in a most magnificent manner. Held by a skeletonized and mirror-polished top bridge, the one-minute tourbillon features a typically Arnold & Son three-spoke design. Weighing mere fractions of a gram, the tourbillon cage consists of no less than 58 components. Prominently positioned on the dial side, the tourbillon can also be viewed from the back, thanks to an opening in the main plate. The same kind of opening is made below the small seconds display, adding to the symmetry of the Tourbillon Chronometer No. 36.

The apparent technical virtuosity of the Tourbillon Chronometer No. 36 is not only a treat for the eyes, as the watch is a COSC certified chronometer; something of a rare achievement for a tourbillon-equipped timepiece.

The decorative haute horlogerie arts are also lavishly demonstrated in the Tourbillon Chronometer No. 36. The entirely in-house conceived and manufactured A&S8600 calibre features a smooth sand-blasted main plate and bridges with chamfered and polished edges. The main plate and bridges are treated with a golden coating, echoing the aesthetics of the historical pocket watches made by John Arnold. The main plate also is set with several mirror-polished 18k gold chatons, while the wheels in the gear train are embellished with circular satin finishing with chamfered and polished edges. Even the screws are beveled and feature with mirror-polished heads.

The heart of the watch, the tourbillon, features a traditional construction with a top bridge, while the mirror-polished cage has the signature Arnold & Son three-spoke design, making a complete turn in 60 seconds.

The Tourbillon Chronometer No. 36 is available in red gold and limited to 28 examples.