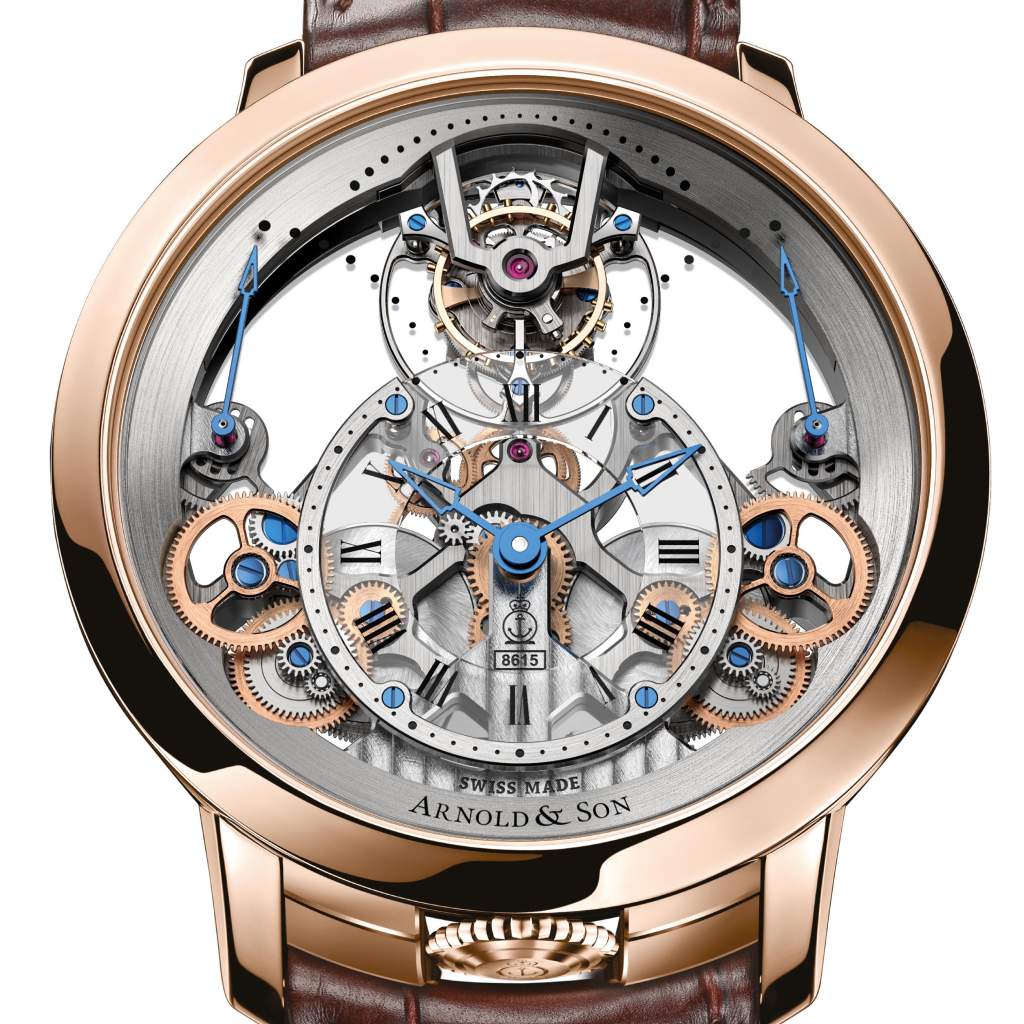 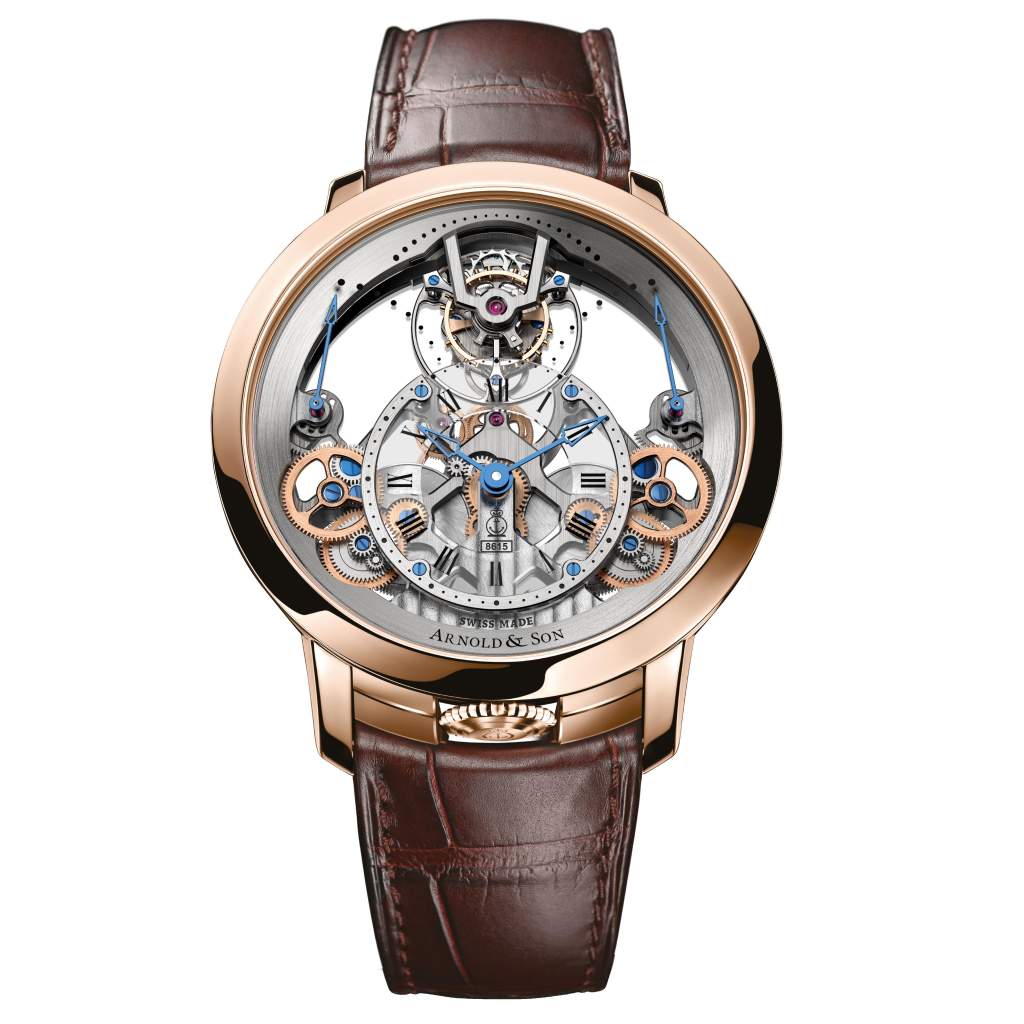 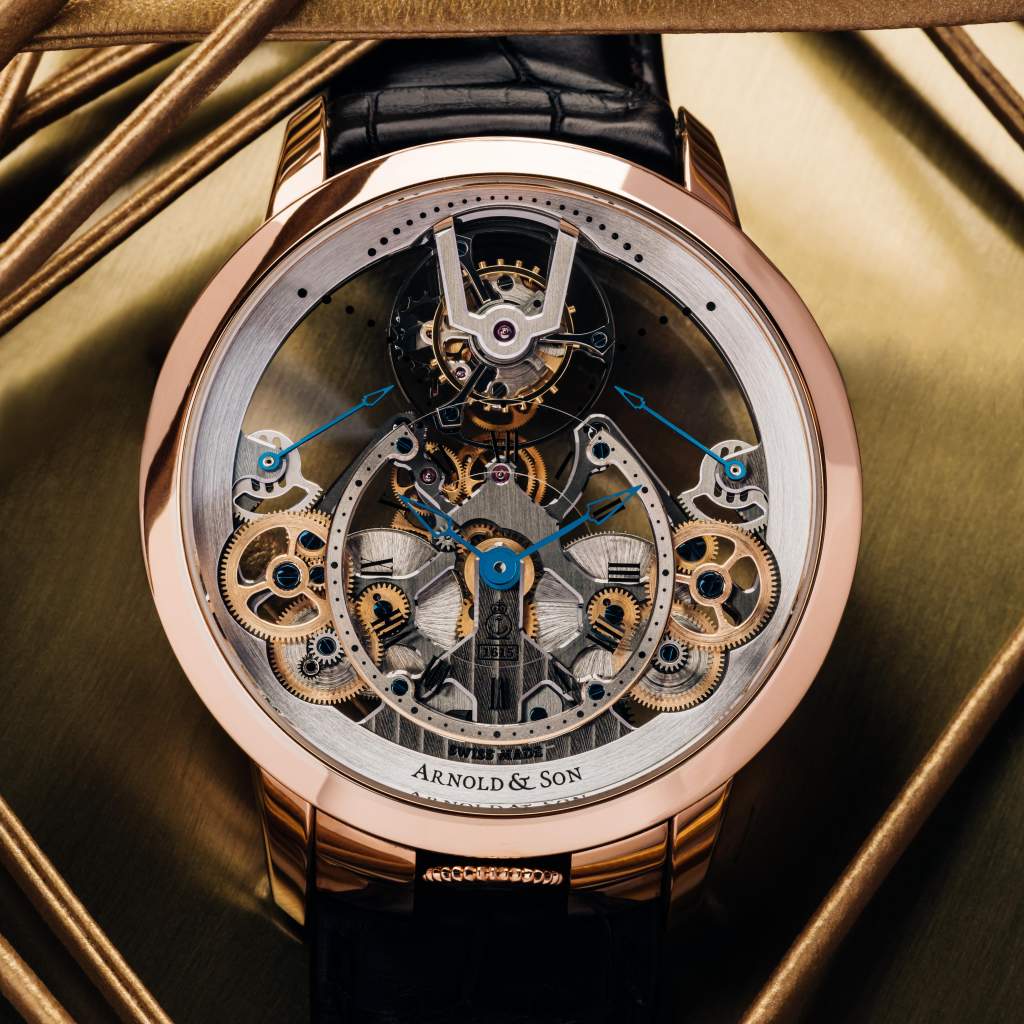 Deftly blending its British heritage with its Swiss watchmaking savoir-faire, Arnold & Son offers a new calibre to its Time Pyramid collection. With a skeletonized pyramid-shaped tourbillon seemingly floating between two sapphire crystals, the Time Pyramid Tourbillon is a true rendition of technical prowess and sleek elegance.

The Time Pyramid Tourbillon presents a cohesive combination of watchmaking feats organized in a pyramidal architecture. The skeletonised calibre A&S8615 pays tribute to the John Arnold’s regulators with their distinctive hours, minutes and seconds on different axes. The movement is built on three levels. The tourbillon and the two power reserve indicators are superposed by a sapphire crystal dial indicating the hours itself, crowned with a rhodium plated ring for the minutes. This exclusive construction offers a lively-look and three-dimensional face to the timepiece and, to further enhance the balance and symmetry, the crown is positioned at six o’clock.

The gear train runs vertically in a linear arrangement connecting the two barrels at six o’clock to the tourbillon escapement at twelve o’clock, giving the movement its pyramidal architecture. The bridges are designed so that all the wheels, the two mainspring barrels, the escapement and balance wheel are all visible from the dial side.

Besides the off-centred hours and minutes, seconds are on the tourbillon and the two power reserve indicators are on each side of the linear gear train. The blued steel hands indicating these power reserves artfully demonstrate how the right barrel takes over when the left barrel reaches a limited power and thus, to maintain an optimum and accurate functioning. The two serially set up barrels supply the in-house manufactured calibre with a total of 90-hour power reserve and provide a more regular force to the wheel train.

To meet with Arnold & Son finishing standards, the movement of the Time Pyramid Tourbillon is decorated with chamfered bridges, polished edges and Côtes de Genève while the main plate is satin-finished, the A&S three-spoke wheels chamfered, the edges polished, and the screws blued. The top bridge and cage plate of the tourbillon are circular satin-finished, chamfered and mirror-polished by hand.

The Time Pyramid Tourbillon is housed in a 44.6 mm diameter 18-karat red gold case and adorned with a hand-stitched alligator strap.