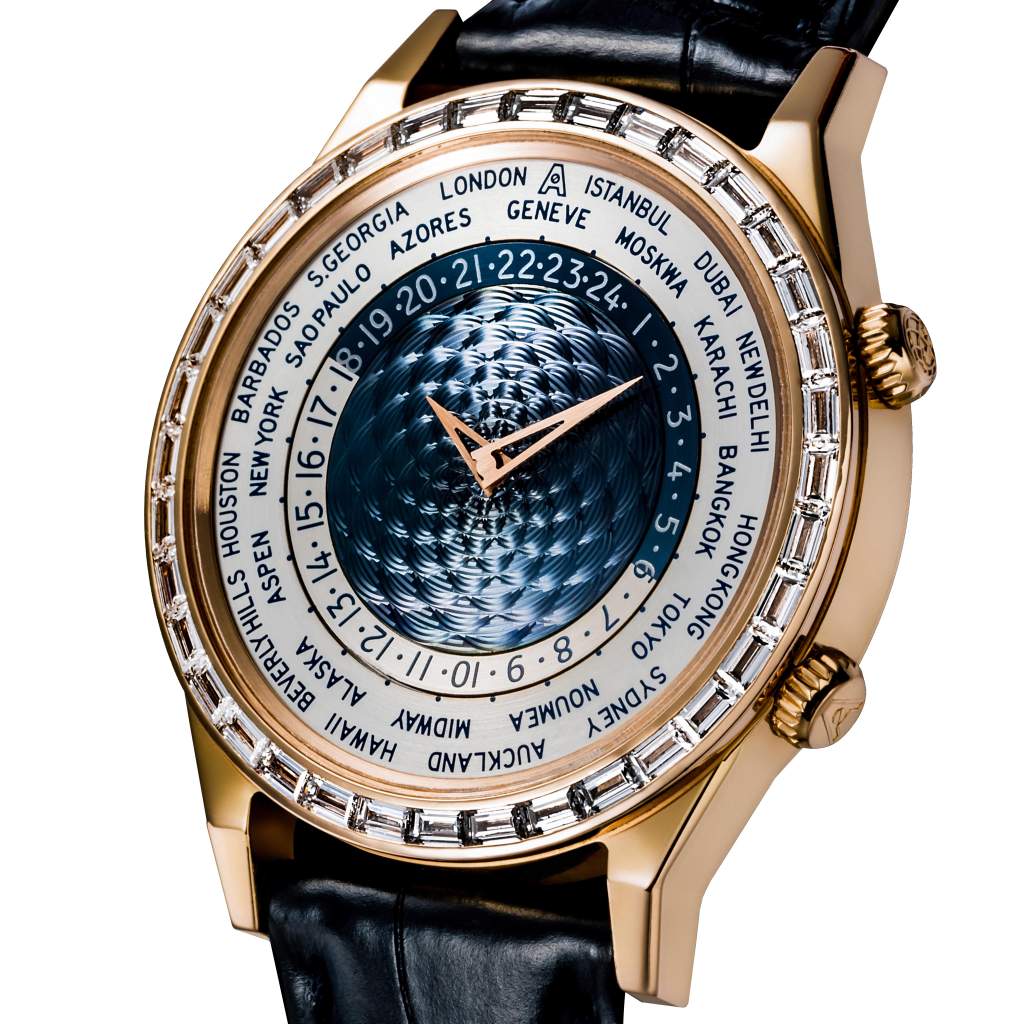 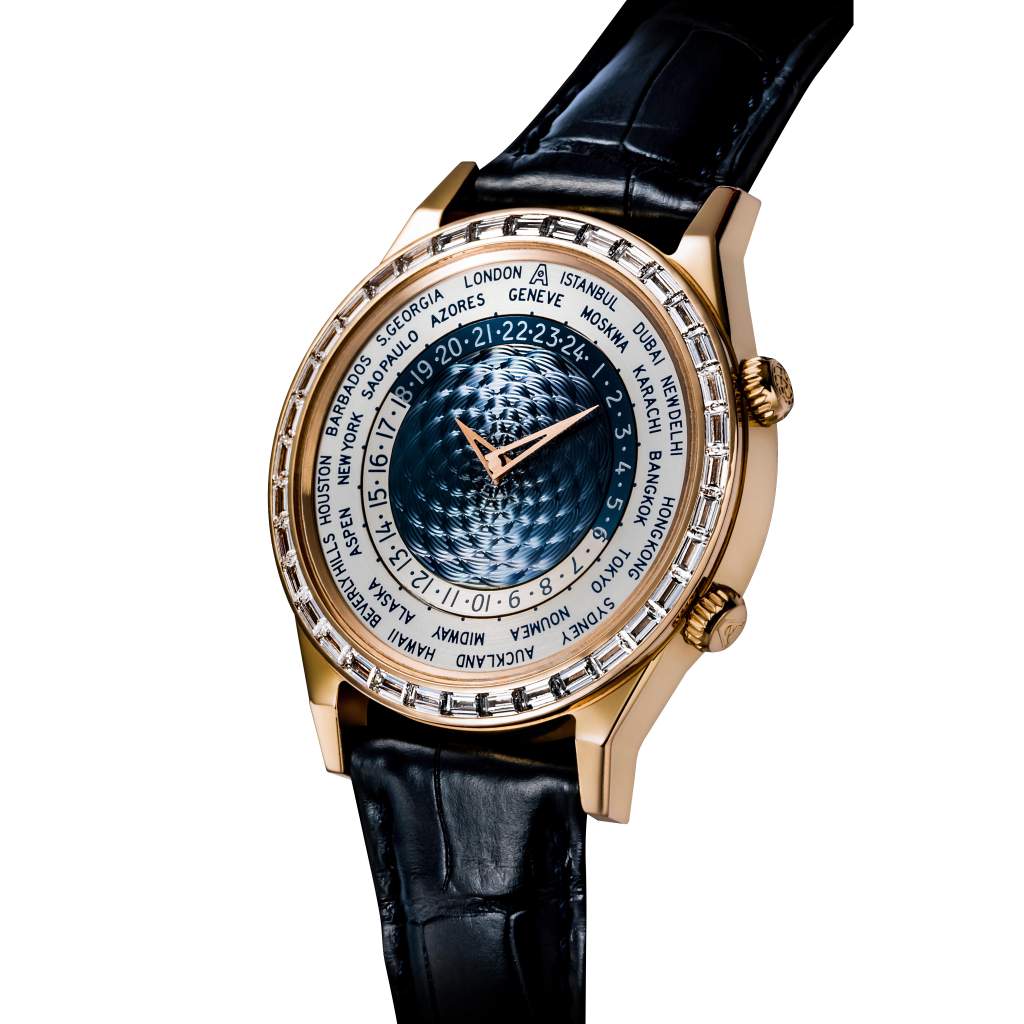 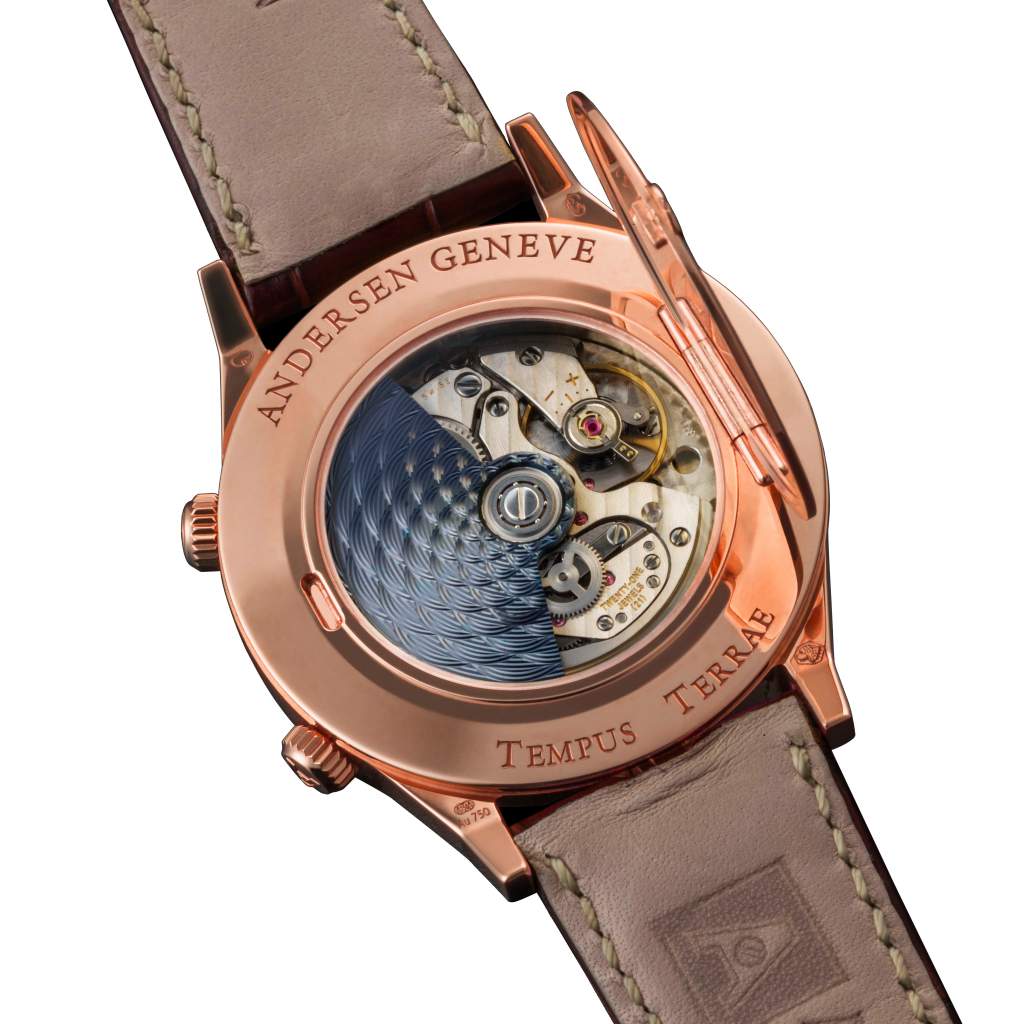 The Tempus Terrae carries ANDERSEN Genève’s DNA adorned by watch Collectors: a very sober and classy watch case in gold with aesthetic simplicity. The centre of the dial is made of exclusive BlueGold that ANDERSEN Genève has been mastering for decades. It is a 21ct gold with iron elements in it. Once heated the gold gets an exclusive blue colour that reflects light in a very special way. No two dials get out of the oven with the same colour, making every dial unique. The hand guilloché “scale” pattern empowers light reflexion too. It is an extremely difficult texture to handcraft.

In order to let the BlueGold dial shine as much as possible, the ANDERSEN Genève logo was removed from the centre of the dial and replaced by the "A" logo on the outer ring of the dial, the so called "City Ring", above GENEVE. Brushed "A" shaped Andersen hands are also part of ANDERSEN Genève’s DNA. They remain as discreet as possible to give a clear visibility of time.

The Tempus Terrae has two crowns. The first one with the "A" logo will set the time (minutes and hours). The second one with a "TT on a globe" logo will be used to set the reference time zone, i.e. the corresponding city, where the user is living (or travelling).

Svend was already well known by Collectors worldwide, thanks to his outstanding achievement: “The Bottle Clock” in 1969. In 1980 a Swiss Collector asked him to re construct and make a new gold case for a very complicated pocket watch movement from Louis Audemars. He did it and more and more Collectors arrived with such demand. So, he started his career as independent watchmaker by first manufacturing pocket watch cases, with harmonious styles, for Collectors. Satisfied with the high quality of the work, watch Collectors started to ask for their personalized and bespoke time piece (called “Pièce Unique”). Ever since, ANDERSEN Genève has been developing complicated watches such as the annual calendar, perpetual calendar, and jumping hour calendars. One of ANDERSEN Genève’s most complicated watch developed is the Secular Perpetual Calender. It is a watch that accommodates a quirk of the Gregorian Calendar; three secular years, not divisible by 400: 2100, 2200 and 2300 and are not leap years. In these years’ regular perpetual calendars require manual correction, for e.g. it doesn’t need an extra day in February (there is no “29”). The complication developed by ANDERSEN Genève will show the date without adjustment every year up to and beyond 2400.

While working at Patek Philippe in the early 70’s, Svend had the chance to work on the world time complication developed by the Geneva based watch maker Louis Cottier. Mr. Cottier created the first pocket watch in the 1930’s and then the first wristwatch with an indication of different time zones. In commemoration to Louis Cottier’s first world time wristwatch, ANDERSEN Genève designed its first World time watch in 1989, the “Communication”. It was a great success and the watches were delivered to watch Collectors in 1990. Followed the “Christophorus Colombus”, the “Mundus”, the “1884” and the “Tempus Terrae” series of world time watches and “Pièce Unique”. World time watches are indeed part of Andersen Genève’s DNA.

Other ANDERSEN Genève’s iconic timepieces are the collections of Automaton’s (Eros & Automaton JOKER) watches and Montres A Tact.

Montre A Tact watches have 2 reading time windows on the case of the watch so that its owner doesn't need to turn his wrist to read time. The complication developed in house is added on a vintage high-quality automatic movement upgraded by ANDERSEN Genève. This watch doesn’t have hands on the dial and offers a wide range of personalization from hand painted scenes to any type of hand guilloché, hand engraving or precious stones. Portraits, coat of arms, miniature painted or hand engraved scenes have been realized with the help of master craftsmen of their respective fields.