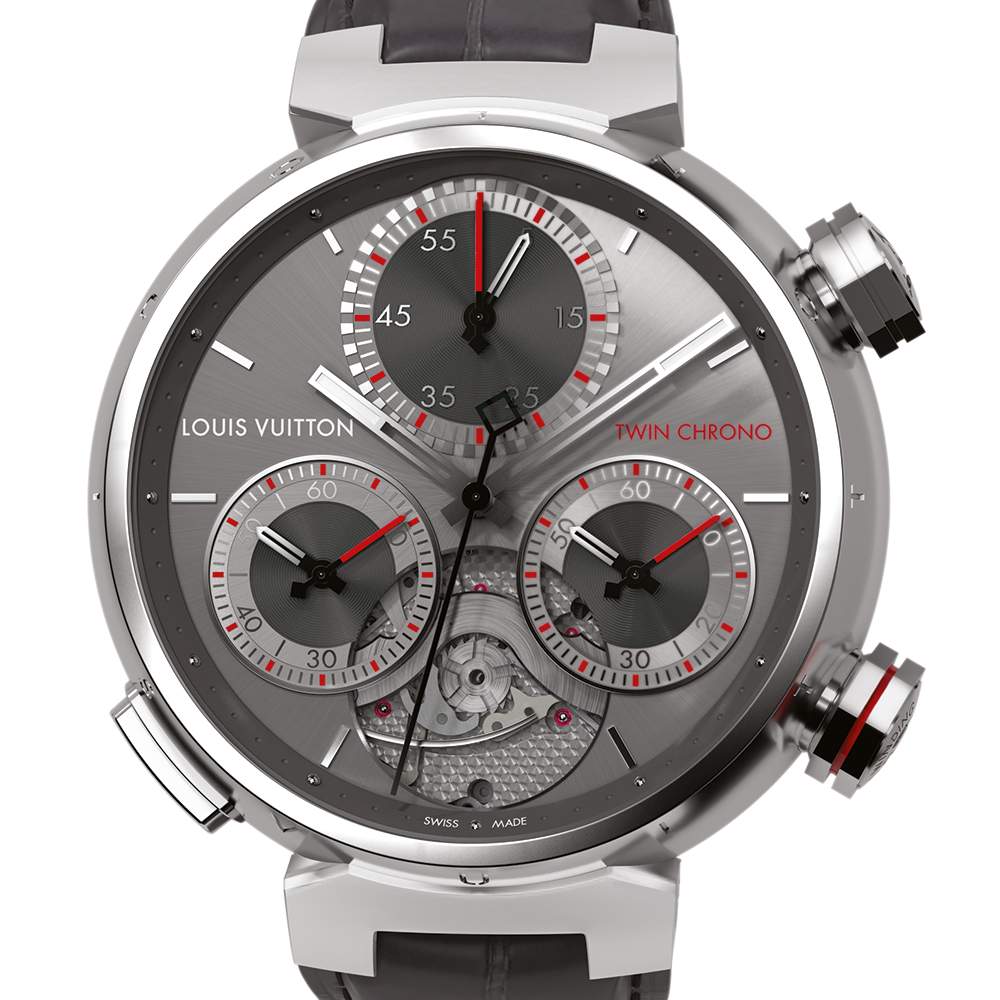 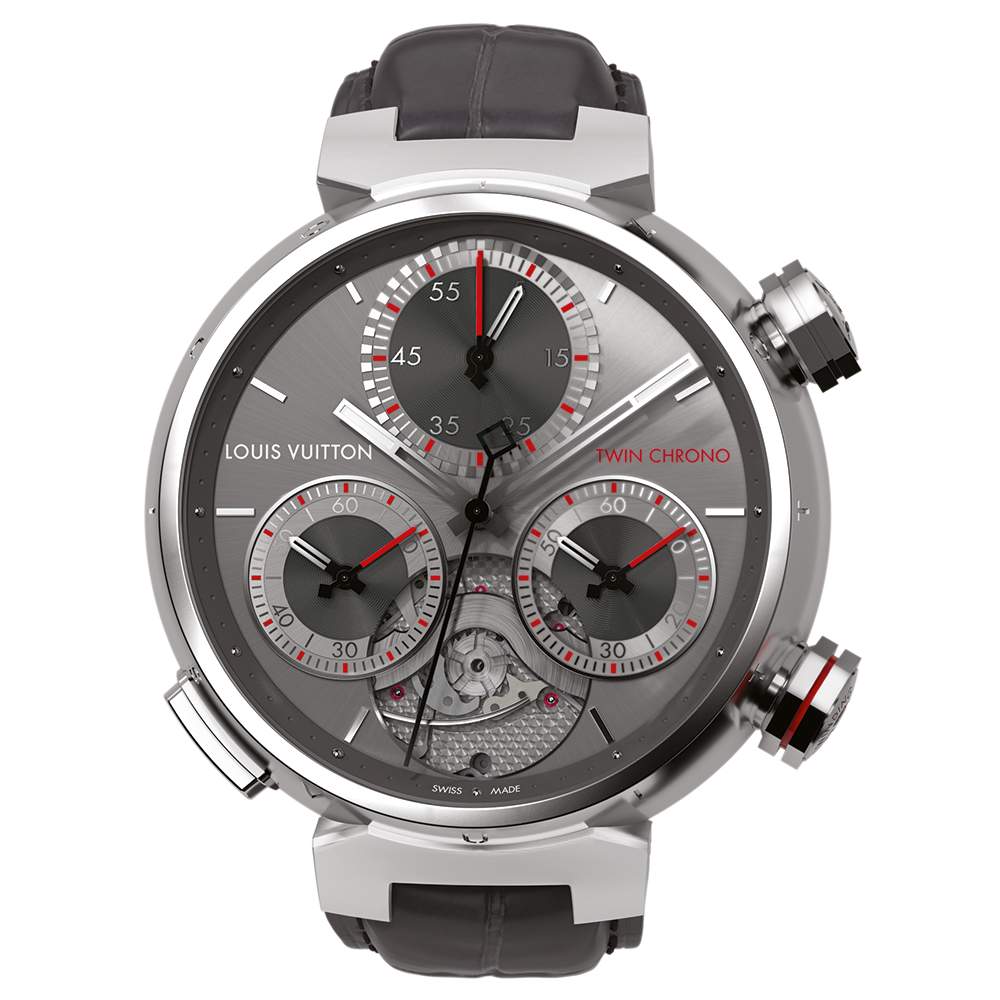 Created in 2013 at the heart of the Tambour Twin Chrono Match Racing, the LV 175 calibre, which allows two competitors to be timed separately and shows the difference in their times at the finish line, is offered this year in a model inspired by motor racing.

A genuine patent-pending innovation, this dual-chronograph with a differential display is able to time two vehicles separately with, in addition, the option of seeing the difference between the two times being measured simultaneously on the same dial.

This innovation represents a major step in the history of the chronograph. It was designed and produced by the master watchmakers from La Fabrique du Temps Louis Vuitton manufacture.

The LV 175 calibre’s operation relies on the use of four different “motors”, three of which are dedicated to the dual-chronograph function. The major difficulty, as one can well imagine, was to ensure the perfect synchronisation of all of these movements, which sometimes stop and start simultaneously. We understand better why four years’ development were required to fine-tune the ingenious – and spectacular – mechanism visible through the transparent back.

And it takes no fewer than 50 hours to assemble the movement’s 437 components (40 of which were specially invented to allow the Twin Chrono LV 175 calibre to come into being). To gain a better understanding of the mechanical complexity of the whole, you need only bear in mind that far fewer components are required to manufacture a Minute Repeater calibre!

As is often the case in high-end chronographs, the column wheel continues to play a key role here. However, for a dual-chronograph with a differential display, not one but two column wheels are required for the movement to function correctly. And while the one controlling the hands features a conventional design, the one located on the bridge is a little masterpiece of ingenuity. One of its kind, it possesses three different levels, each controlling one of the three calibres dedicated to the chronograph function. This column wheel, the cornerstone in the Twin Chrono LV 175 calibre, is itself controlled by a 4-stroke single pusher, an indispensable element designed to make the instrument easy to use.

This simplicity is also found in the use of the winding crowns, with the one positioned at 2 o’clock (stamped LV) serving to set the time and wind the calibre dedicated to it, while the other positioned at 4 o’clock (engraved Twin Chrono Winding) winds the three calibres for the different timing functions.

This is also one of the Twin Chrono Grand Sport’s main characteristics: combining an extremely complex mechanical core with incredibly easy and intuitive use.

The Tambour Twin Chrono Grand Sport owes its simplicity of use to an innovative system making it possible to control all of the timing functions using one and the same mono-pusher located on the middle at 8 o’clock.

To better understand the benefits of these multiple functions, let’s put ourselves in a motor race situation.

First press the mono-pusher when the race begins. Timing begins on the lower two counters.

Press the mono-pusher a fourth time: the counters are reset to zero and the watch is ready to time another race.

While simplicity of use is clearly essential for a complex mechanism, the same applies to the clarity of the information on the dial of the watch that houses it.

In this area too, the Tambour Twin Chrono Grand Sport is as easy to read as a dashboard.

The azure counters thus stand out perfectly against the grey dial and feature hands, indexes and time markings in contrasting red and white. And to distinguish the main counter positioned at noon even more easily, the latter has been encircled with a mirror-finish crenelated detail.

We note that the dial allows the eye to “dive into the motor” through the wide opening, making it possible to observe the second column wheel – which could be described as the movement’s “gear box” – in operation. On the other side, the three-level column wheel is visible through the sapphire back.