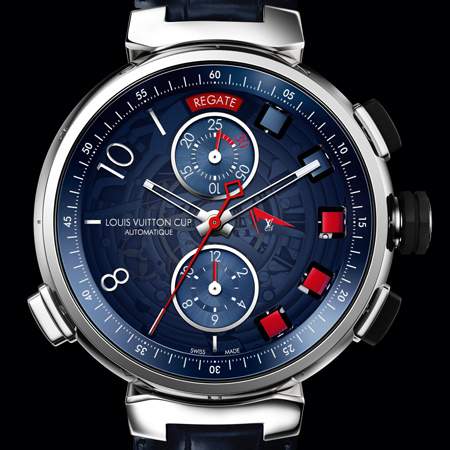 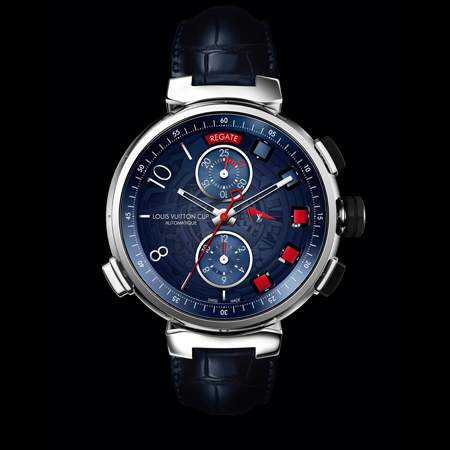 In 2010, Louis Vuitton offered a novel way of reading the time with the Tambour Spin Time collection. Its secret: the hours are revealed by cubes which rotated simultaneously to show either a neutral or numbered face.

Building on this now iconic movement, Louis Vuitton is developing the collection with a new reference dedicated to Regattas: the Tambour Spin Time Regatta.

A few Regatta rules
Great importance has always been given to the time which precedes the start of a Regatta race. Before the start of the Regatta, a time period set by the organiser of the event allows the skippers and crew to position themselves as best possible on the starting line – called the Lay Line – depending on the wind and forces present.

For a long time, the countdown chosen for major challenges such as the America's Cup was ten minutes. However, the arrival of sport catamarans with AC45 wing sails has allowed the development of those challenges, making them both more dynamic and more spectacular, and thereby encouraging the public to become actively involved in the event. These highly manoeuvrable boats will be replaced by even more impressive AC72 Catamarans in 2013 for the Louis Vuitton Cup and the America's Cup.

The race rules are now as follows: five minutes before the start, the crews are alerted with a first signal; the countdown begins. Two minutes before the start, another signal means that they can enter the starting zone – this is when they must manage their speed, ideally crossing the line at full speed, just after the starting “cannon fire”. Boats crossing the line too early are penalised.

Tambour Spin Time Regatta
A distinctly nautical example of pure watchmaking, the Tambour Spin Time Regatta is set in a white gold case with an alligator strap and features a red push button to activate the Regatta complication, positioned at 8 o'clock. Once on board, a simple push of the button and the “chrono” indication that appears in the 12 o'clock aperture disappears to be replaced by the word “Régate”.

At the same time, the chronograph's 30-minute counter will leap forward and move to the 5-minute countdown displayed in red in the counter. This way the minutes before departure are taken into account in the final measured time

As if by magic, five cubes on the right of the dial will begin to spin from blue to red, each indicating the elapsing countdown.

This unprecedented and first-class complication developed by the Maison Louis Vuitton's watchmakers will help skippers, in the heat of the action, to keep time of the five minutes before the race and the minutes remaining before they must cross the starting line.
A glimpse of the chronograph's complication can be partially viewed through the blue-toned sapphire dial, subtly revealing its incredible sophistication.

The watch designers' quest to tame time has led them to create a sophisticated mechanism capable of giving density to minutes, which always seem to stand still when the countdown is on.