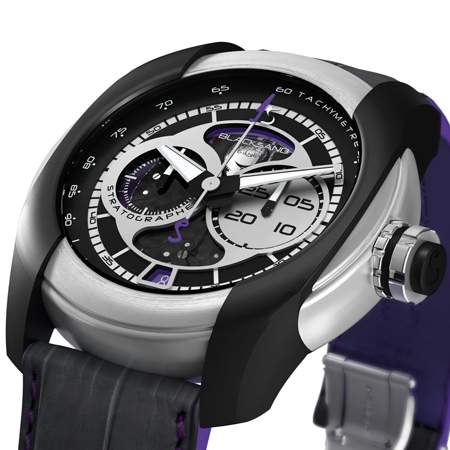 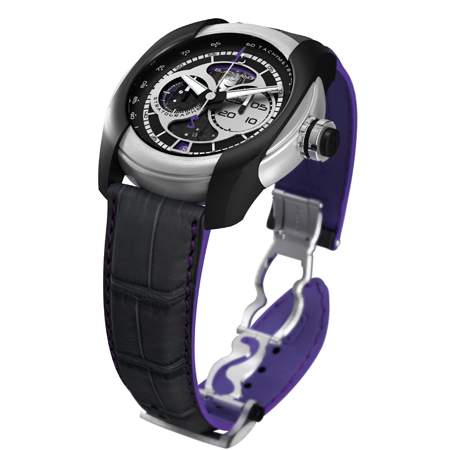 The Blacksand Genève STRATOGRAPHE is a sophisticated and amazing single-pusher chronograph.
It draws the gaze with its unique styling and confirms an intensely personal time. It comes in a tachymeter version for speed fans, and a “pulsometer” version to keep track of intense emotions.
This chronometer symbolises a new era for the Geneva-based brand, with the presentation of the first calibre entirely designed and developed by Blacksand Genève. It heralds the new release for 2012 in the Uniformity men's collection.

FIRST ENTIRELY IN-HOUSE MOVEMENT: Blacksand Calibre 2022
Designed according to the specifications and standards imposed by the founder of Blacksand Genève , the STRATOGRAPHE features all the essential br and codes in the shape of a highly contempor ar y aesthetic and a “Semper fidelis” (ever faithful) approach to traditional watchmaking. Blacksand Calibre 2002 offers a blend of tradition and modernity. The mechanism highlights the traditional column wheel, along with an unconventional approach to the global movement aesthetic with its personalised components.

Case: the case middle is specific to the Uniformity collection. Its easily identifiable cur ve is composed of nine interchangeable elements. It is made of titanium and ceramics and/or white or rose gold, and enables collectors to play with a choice of materials.

Dial: the character of the dial is revealed by a touch of mauve, the brand's aesthetic signature, which is echoed on the tip of the central seconds hand and on the subdial, as well as on the inside of the grey or black alligator strap in matt or shiny versions.

The sweep seconds hand is personalised to reflect the brand identity with mauve tips and a small hourglass logo pointing to the passing time.

The unconventional style of this model confirms Blacksand Genève as exemplifying a contemporar y mood while epitomising the spirit of its “Semper Fidelis” motto by paying tribute to traditional watchmaking.

SINGLE - PUSHER CHRONOGRAPH
It is powered by an in-house movement named Calibre 2002, the year the founder's son was born. This single-pusher hand-wound chronograph with star t/stop/reset functions has a 50- hour power reser ve and beats at 28,800 vibrations per second. Its chronograph hand counting off the 60 seconds is located in the centre, its 30-minute counter at 3 o'clock and its small seconds at 9 o'clock. It features a chamfered mainplate and bridges, along with a black satin-brushed, sandblasted and circular-grained decorations. Its Blacksand index assembly transcends the polished gleam of its screws.

TACHYMETER VERSION
The STRATOGRAPHE Tachymeter has a dial with an hourly speed graduation measuring up to 400 km/h and appearing around the outside of the divisions marking off fifths of a second.
Like all models in the Uniformity collection, the Single-Pusher Stratographe Chronograph has a screw-in two-par t caseback, a personalised ceramic-caped pusher, a sapphire crystal with an invisible logo marking revealed under the effect of hear t; and an ultimate touch of refinement in the shape of a decorative fillet indicating the correct position of the engravings. Reflecting the tireless quest for supreme functionality pursued by Blacksand Genève, the optimal receptiveness of the hour-markers or Arabic numerals to the Super Luminova luminescent material creates a fascinating blue light. Delivered with two interchangeable wristbands with a triple-blade folding clasp, including one in HNBR technical r ubber. Also available in materials such as grade 5 titanium or 5N rose gold.