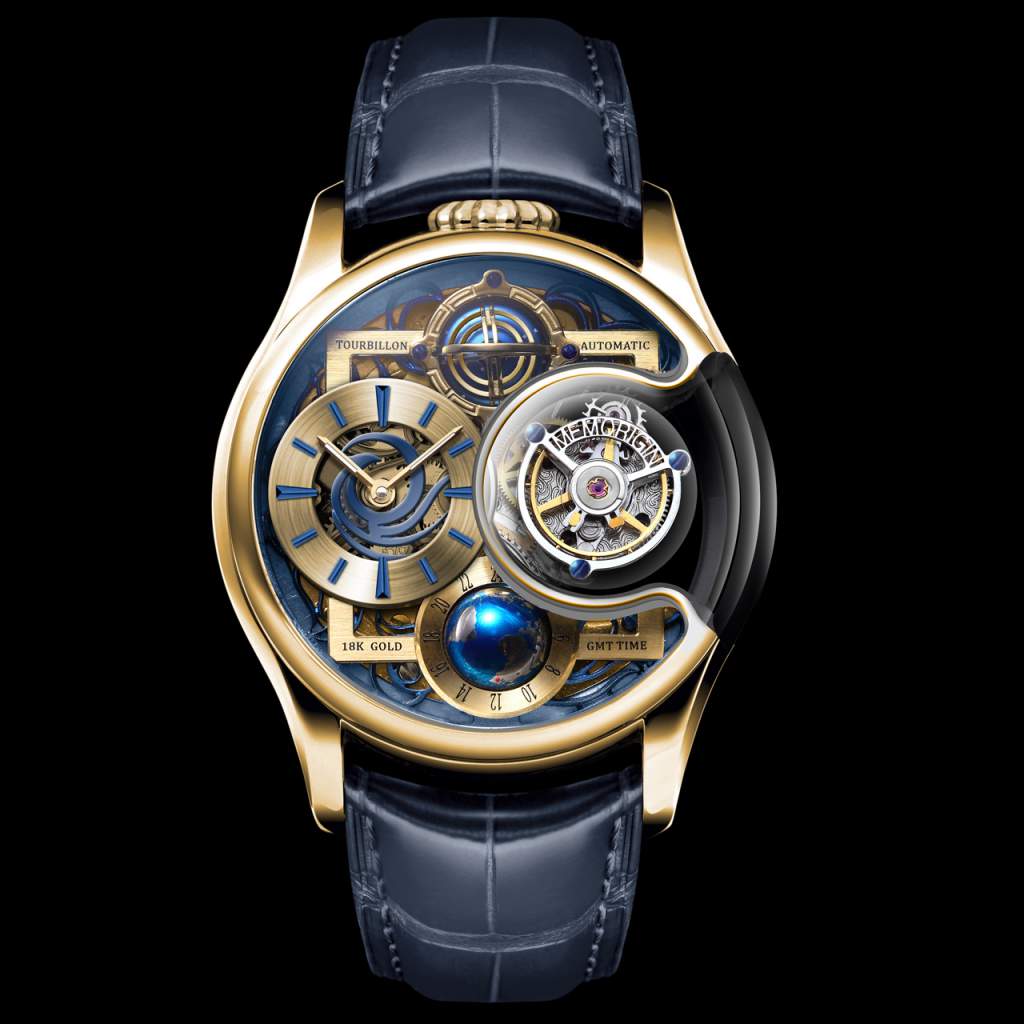 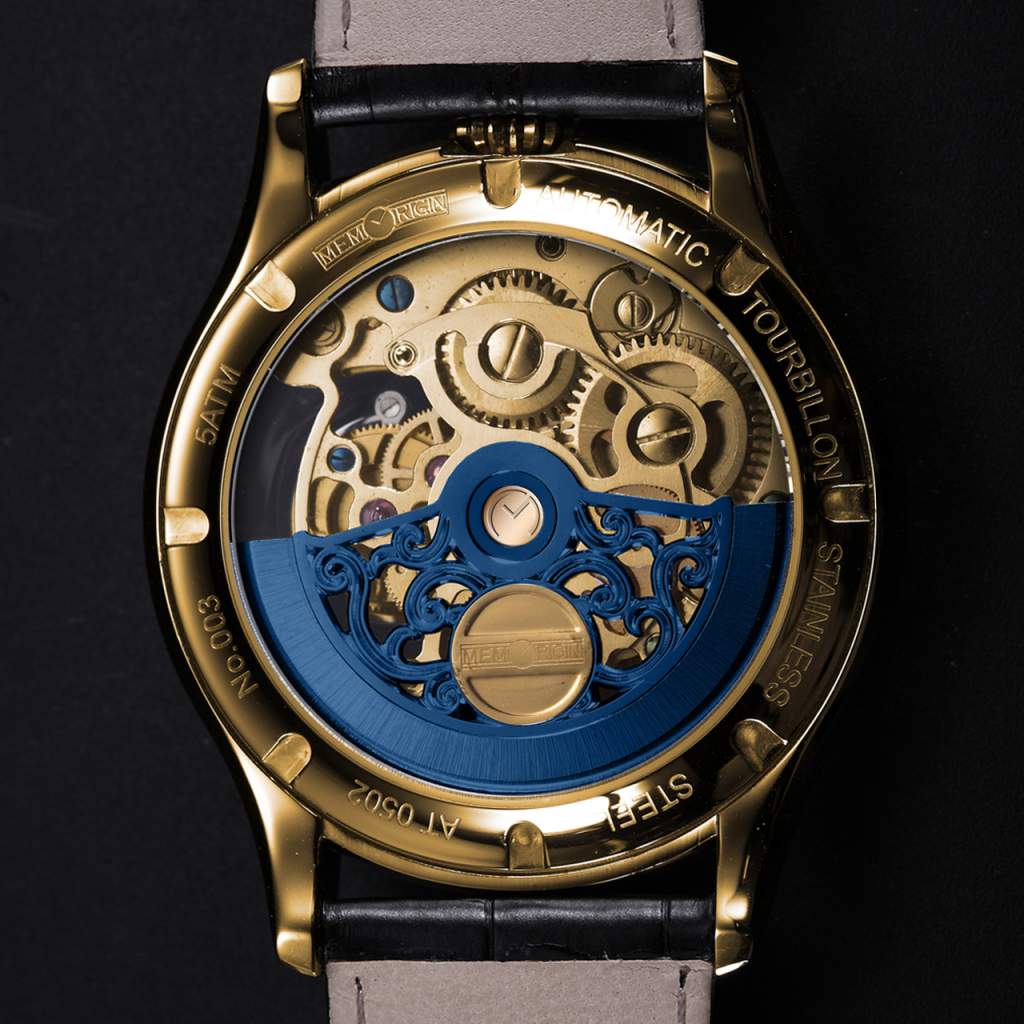 A 3 dimensional case revealed in different angles, a 18K solid gold square boarder links 4 elements on the dial together with the flying tourbillon displayed at 3 o’clock position, the sphere shaped GMT Indicator located at 6 o’clock, the time reading sub-dial at 9 o’clock position and the Chinese ancient planetarium featured decoration at 12 o’clock position, projecting the merge of philosophy of China – round shaped sky and flat ground and Western World view. Curiosity drives human to strive for seeking the truth. Memorigin admires this adventure spirit that let the step forward and introduces this annual present to you – “Stellar Series – Imperial”.

Memorigin believes there is no boundary on the cultures interaction. Back to Eastern Han Dynasty of China, expert in Chinese astronomy - Zhang Heng redeveloped the Chinese Ancient Planetarium which stimulated the circulation of planets. His findings became the pioneer and affected the development of astronomy and science. On the other side of the Earth, Swiss watch master - Abraham-Louis Breguet created the first generation of tourbillon watch. Abranham’s creation also became a milestone and lightened the development of watches. Coincidentally, two giants in history left treasurable insight to “Time” and changed the history. No matter where it is, the core inspiration came from the same way. In order to pay tribute to these pioneers, Memorigin merges these essences from the East and West, engraving the history in this timepiece by installing the Chinese ancient planetarium featured decoration on the dial of the tourbillon watch. Culture is not only from one way.

In human history, all improvements and developments started with our curiosity and fascination with discovery. For the shape of the Earth, people spent a long decade to debate whether it is sphere in the past history. In China and Western countries, the arguments were similar. Some held the belief that the Earth was flat and square, while others had a contrary opinion. But, there were no one that showed the real proof until the Mr. Ferdinand Magellan finished the navigation. Portuguese explorer eventually completed the first circumnavigation of the Earth and proved that the Earth was an oblate sphere in the 16th century. Because of his insistent sprit, he proved his will. With an aim of producing creative tourbillon watch for every customer, our top designers also act in a spirit of exploration, making the impossible possible. A sphere shaped GMT Indicator is created to guide you move forward. Memorigin designer specially marked the Cape of Good Hope as the pointer of the GMT Indicator. All the exploration came from here and dream start over here. A new way was born that presents the dual time zone differently.

Design inspiration - Beyond the past

Every year, Memorigin aims to develop an innovative idea for the watch design to break the traditional appearance of tourbillon watch.. By spending a long time for preparation, the engineer, designer, production department and, the technique and the equipment support from the Memorigin Tourbillon R&D Center jointly create a special sapphire glass only for this series to optimize the stunning effect of the rotating tourbillon and parts while visualizing through the sapphire glass from different angles. To look deeply, a highlight area is hidden in the tourbillon and part that a symbol of dragon is engraved. The dragon seems to be flying while the tourbillon rotated. This is the area that Memorigin designer leaves for all watch collectors to discover.

The form of sapphire glass is not easy to be transformed or cut. As this reason, Memorigin spend a long period to cut a one-piece and curved sapphire glass to finish this challenging task. The production time is above expectation. By consuming and damaging over hundred pieces of cutter, this challenge is finally completed.

Movement is the main core of a timepiece. Memorigin specially presented this automatic tourbillon movement for this Series; it provides 40 hours of power reserve, with frequency of 28,800 Oscillation/ Hour. The flying tourbillion at 3 o’clock position, engraved with Memorigin’s logo on the tourbillon. Without affecting the stability of the tourbillon working, this unique feature differentiates the Memorigin’s tourbillon watch from the others in the market.