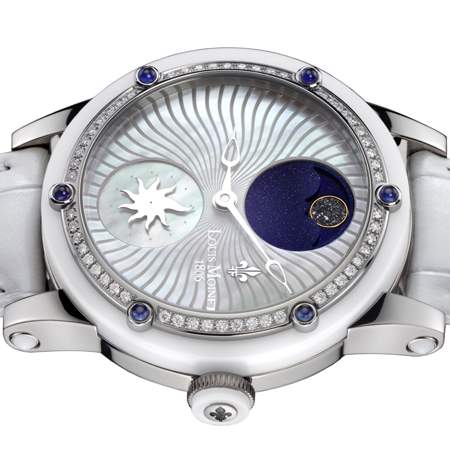 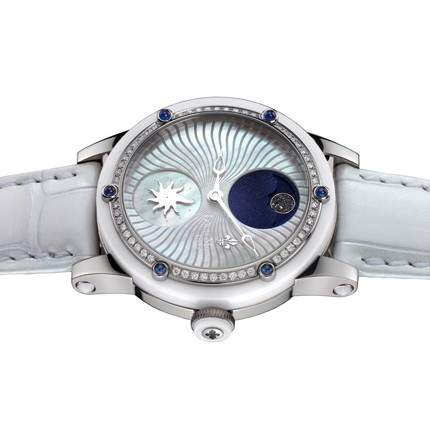 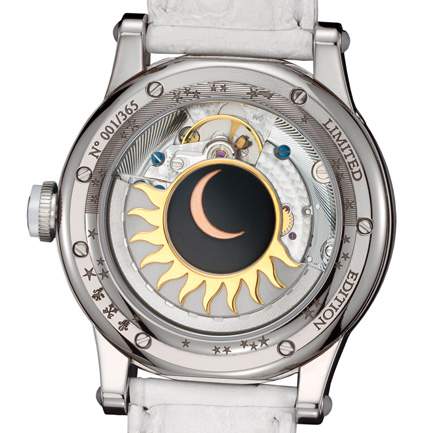 “STARDANCE” is a ladies' watch inspired by the interstellar world. Its mother-of-pearl dial presents the two universes of the day and night. The night is evoked by the splendid moon phase, in which the moon is adorned with a fine slice of Enstatite EH3 meteorite, containing interstellar diamonds. The cosmos is depicted in aventurine, creating a decidedly sidereal overall effect.

Alternating with the nocturnal world is that of daytime, represented by a running seconds display shaped like a sun of which the longest ray indicates the seconds.

The Louis Moinet signature characteristics are to be found in the hands with their “Gouttes de Rosée”® (dewdrop) design, as well as the mother-of-pearl dial adorned with “Côtes du Jura”®.

The standout feature of the Louis Moinet case is its upper bezel set with 6 cabochon-cut sapphires. The bezel itself is set with 54 VVS Top Wesselton diamonds. The case is made of avant-garde materials, meaning grade 5 polished titanium as well as white ceramics.

The self-winding movement was developed and crafted by Louis Moinet and Concepto. 49 parts were required to create this exclusive additional mechanism complementing an existing calibre. The rotor combines two universes: that of the night is shown by a disc adorned with a gold-toned moon; while the rays of the sun are portrayed by a special polished and slightly cabochon-shaped part added to the rotor in order to highlight its oscillations.