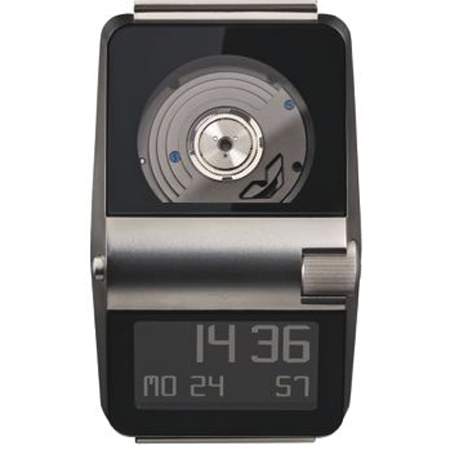 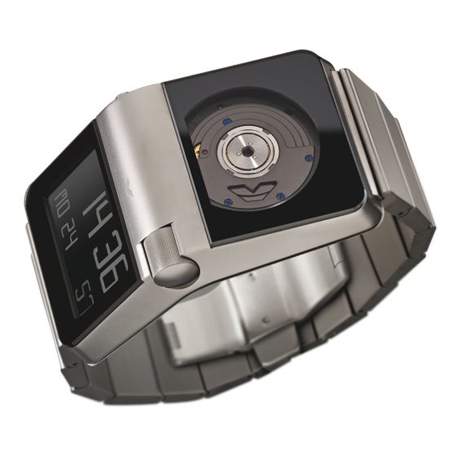 Known for being the inventor of the digital automatic watch, Ventura has recently launched the first automatic watch with digital multifunction display and a visible Micro-Generator System (MGS®) – the newly developed drive and technological core of the new SPARC MGS.

By their wrist movements, the wearers of a SPARC MGS® bring the centrifugal mass to about 4'000 oscillations a day; these are transmitted to a barillet by means of an alternating gear. Within the barillet, a spring is tensioned and discharges its force onto a microgenerator about 17,000 times a day. The microgenerator in turn sends electrical sparks ("SPARC®") to an accumulator which provides the VEN_10 movement with enough energy to power the completely redesigned, very intuitive and multifunction version 2.0 of Ventura's EasyScroll® operating system and the 250-segments liquid crystal display.

Whilst the SPARC MGS® represents hi-tech technology, it stuns with its striking architecture; the in-house built MGS® automatic “manufacture”movement is dramatically set in plain view at the top of the case.

By winning the international GOOD DESIGN Award in Japan in 2011 and the coveted Red Dot “Best-of-Best“ Award 2012, the SPARC MGS is yet another milestone in the design history of Ventura.