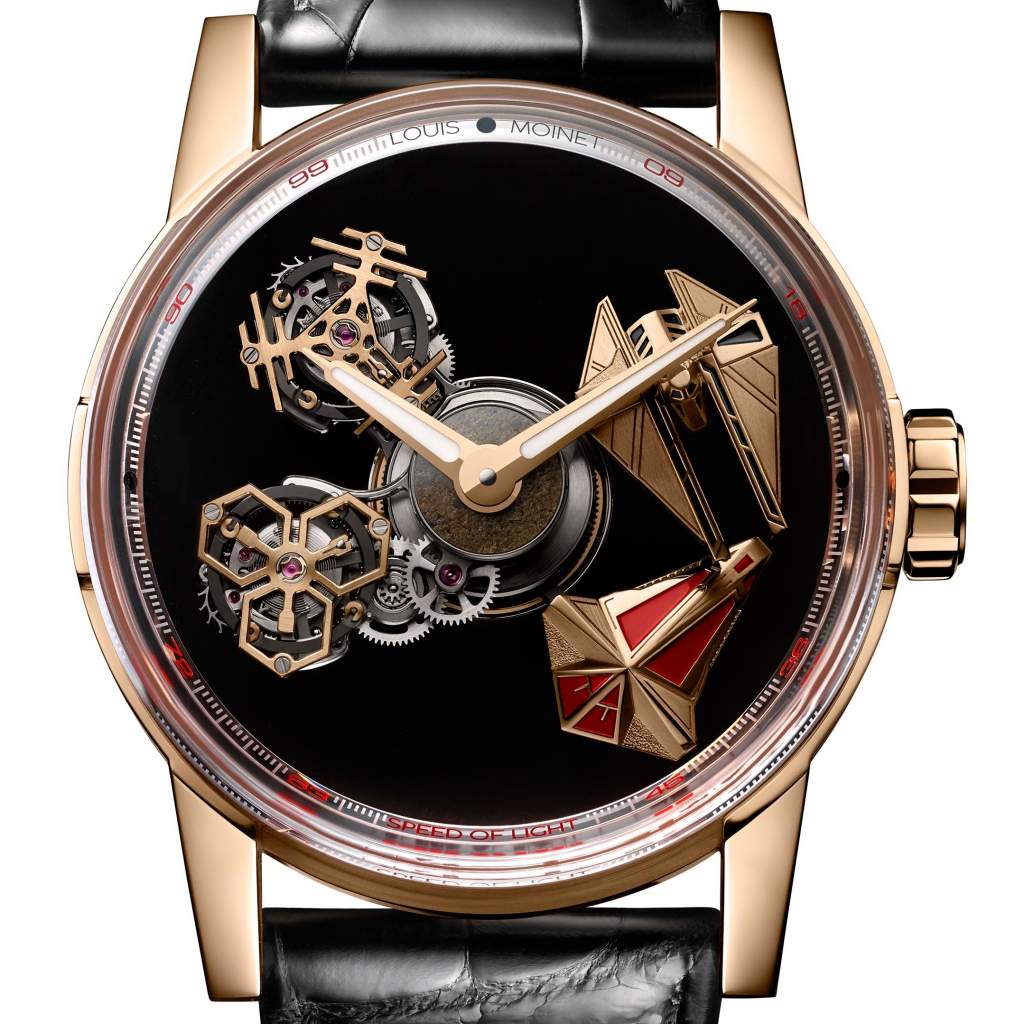 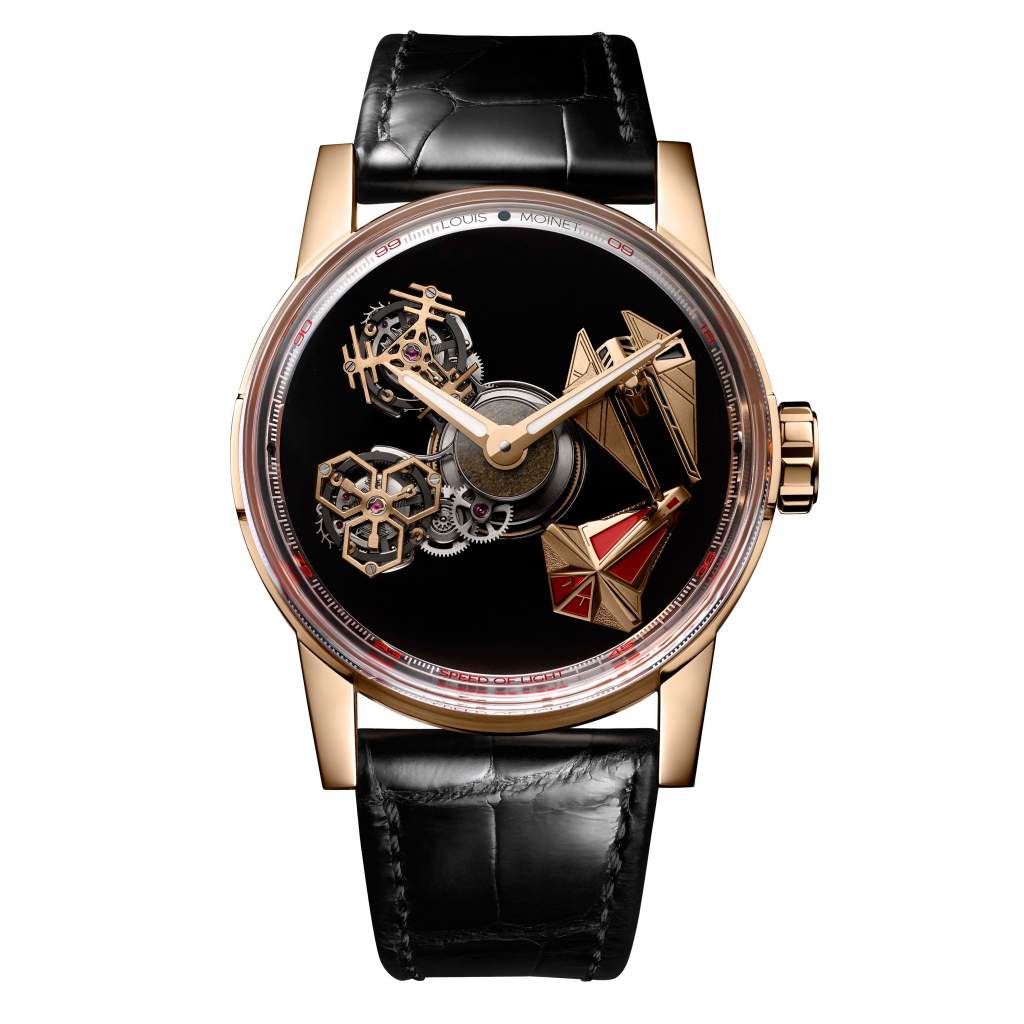 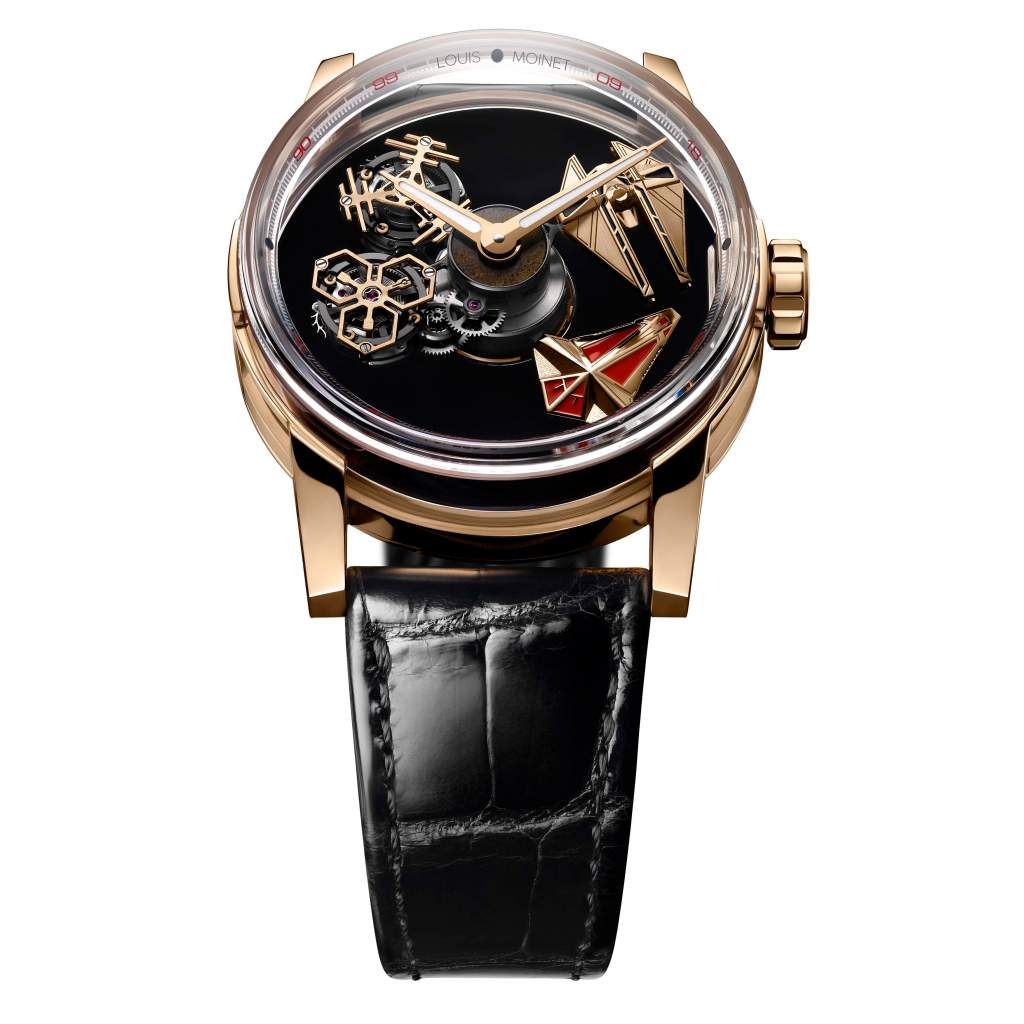 Is it a flying satellite double tourbillon – or the first space object from Louis Moinet? “The technology of the former has given birth to the interstellar world of the latter!” says Jean-Marie Schaller.

Two spaceships battle it out beneath a sapphire crystal dome, facing off eighteen times an hour: the upper spacecraft completes a clockwise rotation every five minutes, whilst the lower vessel turns in the opposite direction, completing a counter-clockwise revolution every ten minutes.

To ensure they can float freely in space, the craft weigh barely 0.5 grammes each and are made entirely from titanium, with a hybrid ceramic colour finish applied by hand. Their movement can be measured in terms of the speed of light – almost 300,000,000 metres per second. The depths of space have been reproduced by inserting a floating flange between the cylinder and the sapphire crystal dome.

“To establish the SPACE REVOLUTION as a landmark creation of its time, we had to set aside all our certainties. In a complete break with the past, the case has been fully redesigned. Made from polished, satin-finish gold, the base supports the sapphire crystal dome, allowing the magic to be admired from the side as well as from above. There’s movement everywhere you look: the two spaceships themselves, of course, plus the two flying tourbillon cages, whose satellites rotate on their own axis once a minute” explains Jean-Marie Schaller.

The mechanism is wholly unprecedented. Initially deemed to be impossible, the design required more than three years of research. Today, construction of this supremely sophisticated architecture requires painstaking work by a handful of outstanding watchmakers. The movement comprises two oscillators, each equipped with a differential mechanism to provide greater precision. Each watch has over 470 components and six ceramic ball bearings to ensure perfect rotation and balance of all revolving parts (the spaceships, the tourbillon cages, and the centre of the titanium gold frame).

Even the winding and time-setting mechanisms stand apart from other timepieces: a function selector integrated in the caseback toggles between the two.

The individual nature of each watch offers an opportunity for Louis Moinet to reassert its identity as a specialist in extra-terrestrial materials. Each timepiece in this limited edition of eight is truly unique, thanks to the meteorite fragment placed beneath the centre of the hands on the watch. One is from the Moon, another from Mars, another again from the oldest known rock in the solar system; still another is a fragment containing amino acids…

The hand-guilloche dial – and the resulting interplay of light and shadow – provide an imposing backdrop.

Ateliers Louis Moinet was founded in Saint-Blaise, Neuchâtel, in 2004. The fully independent firm was established to honour the memory of Louis Moinet (1768-1853): master watchmaker, inventor of the chronograph in 1816 (certified by Guinness World Records™), and pioneer in the use of very high frequencies (216,000 vibrations per hour). Louis Moinet was a watchmaker, scholar, painter, sculptor, and teacher at the School of Fine Arts – as well as the author of the Traité d’Horlogerie, a watchmaking treatise published in 1848 that remained a definitive work of reference for a century.

Today, Ateliers Louis Moinet is perpetuating this legacy. The firm’s mechanical timepieces are produced as one-of-a-kind models or limited editions only and comprise two categories: “Cosmic Art” and “Mechanical Wonders”. Louis Moinet creations often make use of unusual and rare components, such as extraterrestrial meteorites or prehistorical materials. The brand’s core values are creativity, exclusivity, art and design. This uniquely creative mechanical approach combined with bespoke fine watchmaking has enabled Louis Moinet to win some of the most coveted honours around the world, including a UNESCO Award of Merit, six Red Dot Design Awards (including one Best of the Best Award), a Horological Creativity Contribution Award, gold and bronze medals in the International Chronometry Competition, ten Good Design Awards, three Middle East Watch of the Year Awards, two Robb Report “Best of the Best” Awards, three German Design Awards, a Moscow Grand Prix Award, and a “Chronograph of the year” distinction from Begin Magazine, Japan.