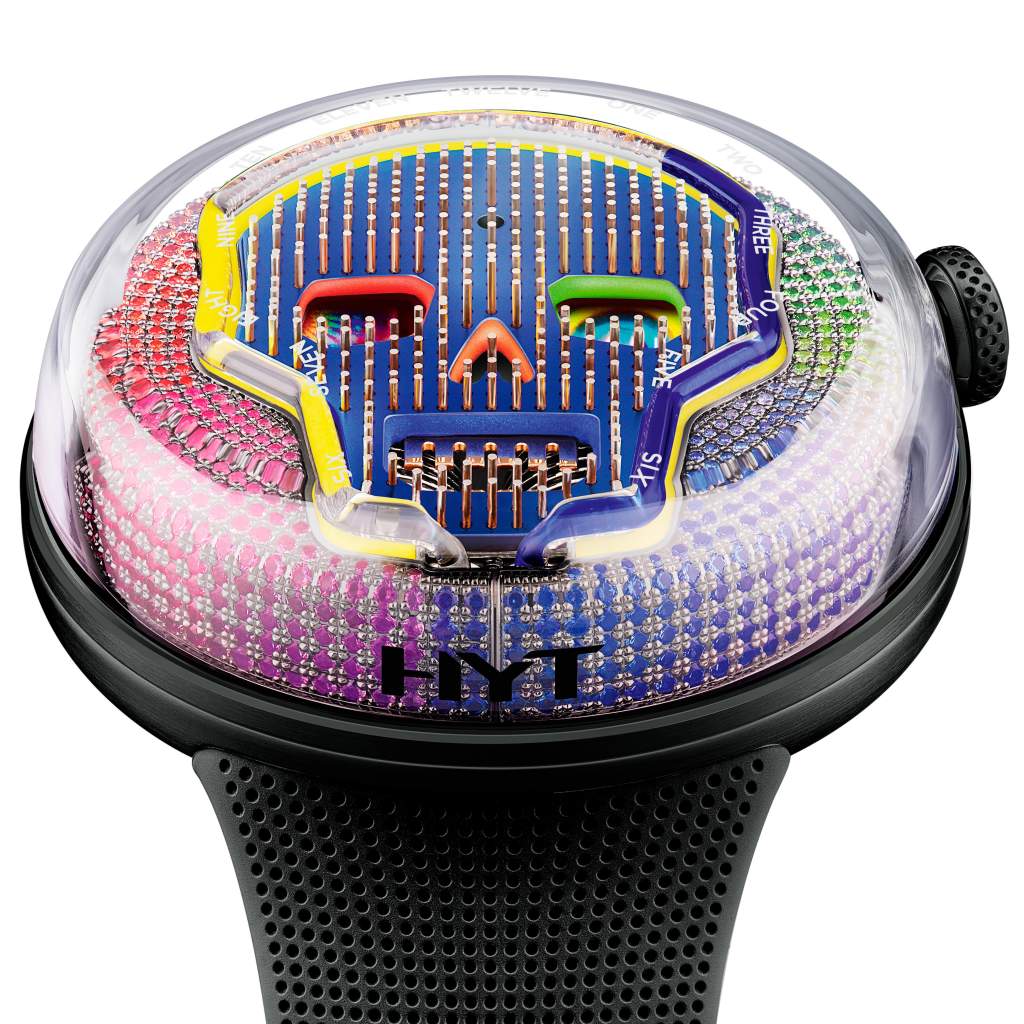 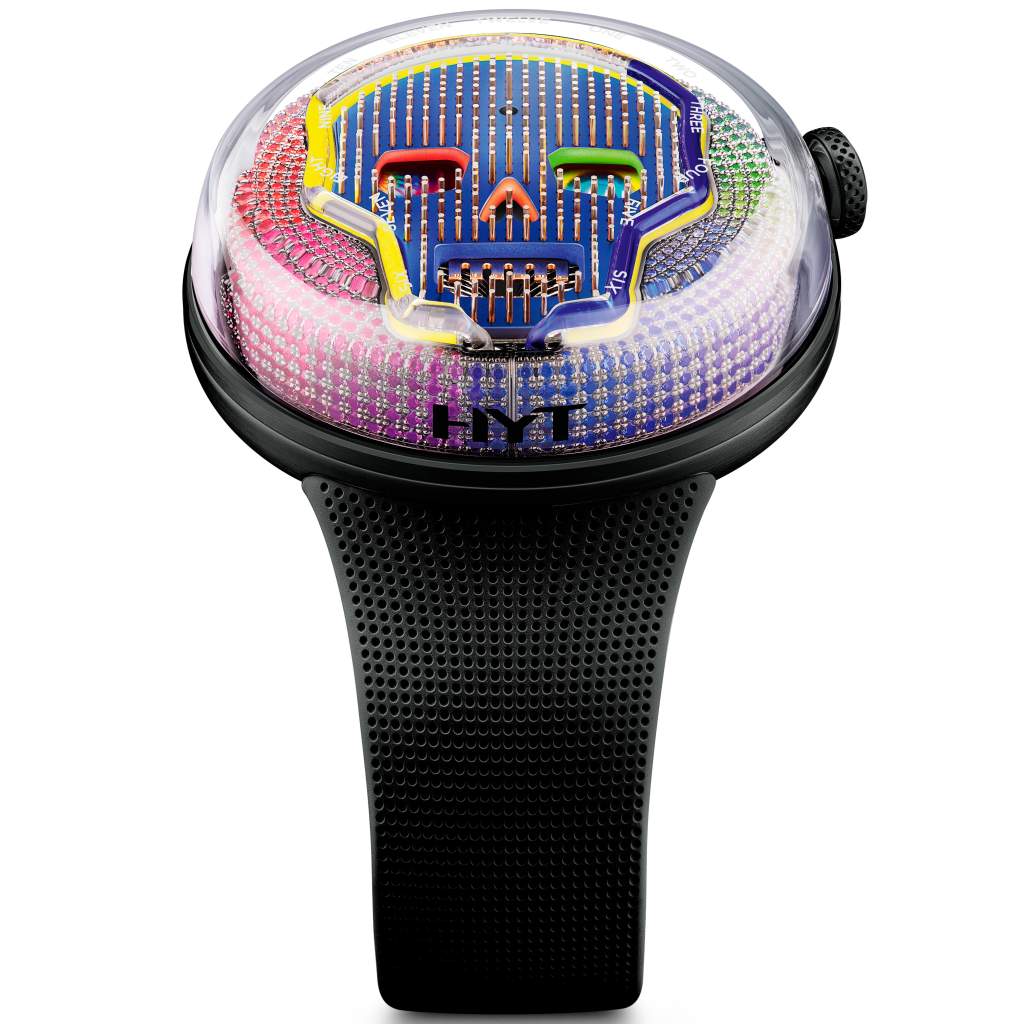 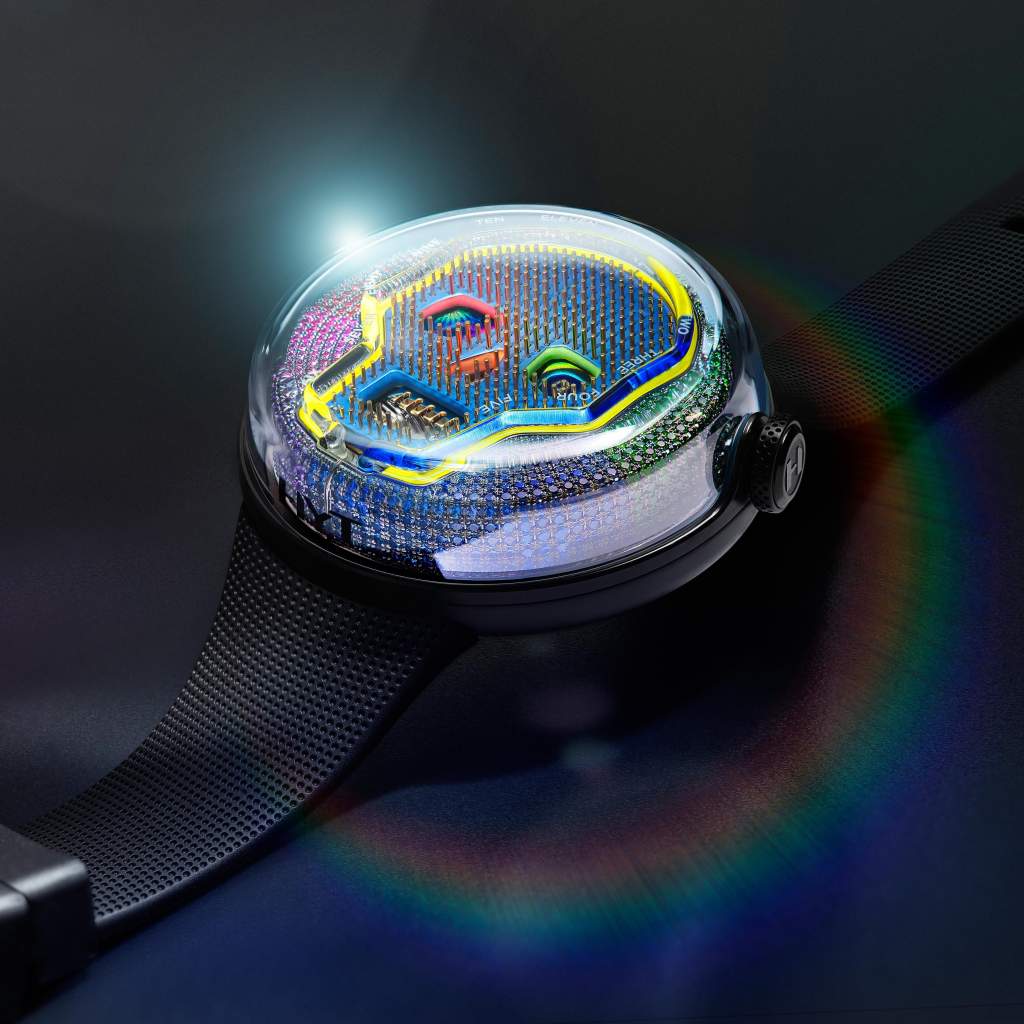 When the past meets the future, something beautiful happens. It’s called the present. In these unique times, we are constantly being challenged to explore new ways of perceiving the now. Dropping on June 8th, 2020, the SOONOW INSTANT RAINBOW by HYT tells this intensely contemporary, fluid story in a captivating, colorful way. Time’s intrinsic flow presents itself as a broad spectrum of possibility. “Now” potentially lasts forever, as it continually becomes what was “soon” just a moment ago. Stopping and preserving time are as illusory as scheduling and prolonging a rainbow. All we can do is enjoy the beauty of both phenomena as they appear to us.

This multi-colored timepiece, integrating the HYT patented fluidic module, shows time and light performing their intrinsic magic, just as a ray of light interacts with water drop to create a rainbow. Its design is rooted in the truth that both are in constant motion. Its message is that both should always be appreciated and never restrained. Yellow and blue, two of the three primary colors, trace the paths of elapsed and future time respectively. The other colors of the rainbow spread across and around the dial with refined gradual shading. Light dances with 668 sapphires, amethysts and tsavorites in 14 color variations. In combination with the violet anodized titanium dial, covered with 313 18-carat yellow gold pins, this heightens the overall radiance of the mesmerizing, three-dimensional whole.

At a time when circumstances challenge us to focus gratefully on life, the styling of the skeleton on the dial of the SOONOW INSTANT RAINBOW has a hypnotic quality. Its right eye shows the power reserve progressing smoothly through the entire color spectrum, as does the seconds indicator in the other socket. Different monochrome Super-LumiNova® outlines, around the openings for the eyes, nose and mouth, draw gazes. And, almost as a tongue-in-cheek reference to the hoped-for pot of gold at the end of the rainbow, is a grin full of solid gold teeth. These, and all times, should be looked straight in the eye from a place of wonder and hope.

WHAT MAKES US FLOW

Once upon a time, philosophy set science in motion. It was 2012. The setting was a digital world, where time on demand had become the new, and precariously temporary, happy ending. Every single second of the day. But if time gains meaning through the content its owner gives it, why continually dispose of it in this way? That is the question HYT answers. This radical watch creator turned to advanced technology to measure what matters: time’s insuppressible flow. Overcoming the force of gravity, they set out to visualize the intrinsic motion of time using liquids. To trace the journey through past, present and future that makes up life itself. Their happy ending is a continual new beginning. HYT succeeded in enabling soon to become now, always.

Each HYT timepiece is a seamless, harmonious union of science, art and design, born of the brand’s unique philosophy on time. A patented, mechanically driven fluidic module is the source of this world of possibility. Colored and clear liquids trace the paths of elapsed and pending time. Their meeting point is the present, a constantly moving, beautifully suspended milestone. By showcasing time’s passage, every watch is an invitation to value what was, what is and what may be. Not for a second should we forget that, like a river, this vital flow can’t be stopped.

HYT tells time’s stories and these are always tales of the unexpected. Creative tension between craftsmanship and technology generates operational and esthetic energy. Radical transparency and three-dimensionality house miniscule detail. The bellows – with walls four times thinner than a human hair - act as time’s powerhouse. The serious business of time’s transience is given a playful wink and grin by a skull. Light acts as a key protagonist in a theatre of visual uniqueness… With HYT every day is flow time.