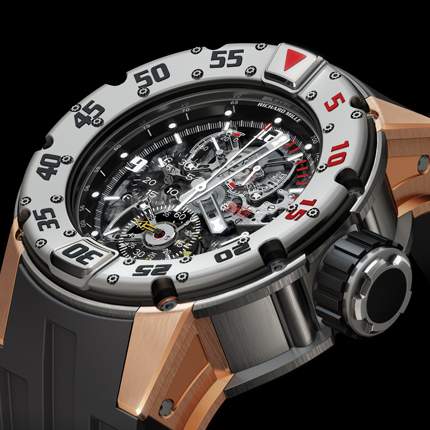 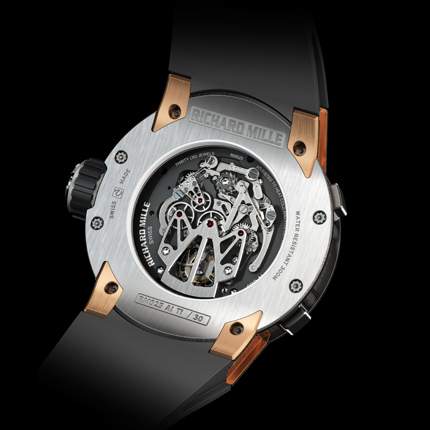 Visually the watch breaks with the iconic Richard Mille case, yet this is a change born directly from technical necessity. Water resistance of this kind, 30 atmospheres (300 meters) following ISO 6425 diver's watch norms, is only possible at these depths with a round case shape. However, look closely and what at first glance seems deceptively simple is much more complex….

The unique tripartite case is complemented by the additional integration of the lugs into the case's torque screw system, as well as the dynamometric crown and a new design of watertight pushers.

The bezel is also unlike any other. It is constructed of three layers, connected with 24 screws, turning unidirectionally following ISO 6425 norms in order to avoid timing miscalculations. In addition, the entire bezel system is screwed to the watchcase making it absolutely stable as well as impossible to inadvertently dislocate or loosen. This unique use of screws allows for perfect adjustment since the bezel is not tensioned into position. For clearer visibility under murky conditions, starting at 12 o'clock, the five-minute markers of the first quarter are highlighted red.

All this attention to detail is just the icing on the cake however; within ticks the caliber RM 025, a carbon nanofiber tourbillon chronograph based upon the famed caliber RM 008, one of the major and uniquely new chronograph designs of the 21st century. The RM caliber 025 unites 2 extremes: the complication of a tourbillon with the notorious complexities of a chronograph movement. This led to a number of new impulses, such as creating and manufacturing a number of parts such as the column wheel and levers in titanium in order to reduce inertia and lower energy consumption circa 50%. This greatly reduces friction on the spindle and eliminates the jumps and shocks of the chronograph hand during stopping and starting, adding to the watch's precision. The production and assembly of the RM 025 Tourbillon Diver's watch takes many months, with only a select number of watchmakers able to cope with its complex assembly and testing. For this reason, it is only possible to produce a highly limited number of these watches per year.

Available in 18-carat red or white gold and titanium, all models are fitted with 18-carat red gold lugs with a screwed and a rubber diver's strap.