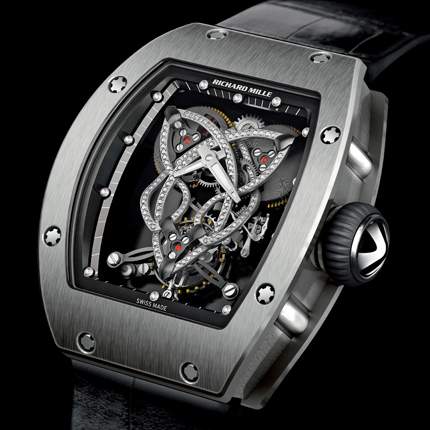 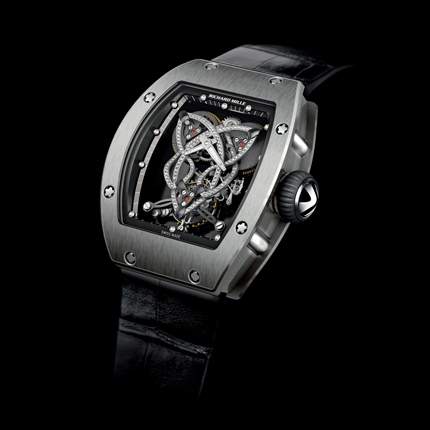 For 2009, a long awaited addition to the ladies' collection at Richard Mile watches has become a reality with the presentation of the RM019 Ladies' Tourbillon wristwatch.

The first and most striking feature of this new creation is the diamond studded Celtic Knot that traverses and weaves itself over and through various parts of the movement, connecting and joining winding barrel, power reserve indicator and tourbillon in an endless cycle. The hour and minute hands are striking in their asymmetrical placement within the flowing lines of this Celtic Knot pattern.

Dating back to about the 5th century, the most emblematic and identifiable artwork in Celtic history must be considered the Celtic Knot. This symbol, also referred to as the mystic or endless knot, suggests that in life there are neither beginnings nor endings, consequently reminding us of the timeless nature of the spirit. With its unlimited and returning pathway, the Celtic knot symbolizes an uninterrupted life; it is both an emblem of longevity and the never-ending cycle of our existence. Brought into the domain of technical haute horlogerie, this eternal symbol takes on a new relationship with the timelessness of time itself.

The baseplate of the watch has been created of black onyx, a variety of cryptocrystalline quartz chalcedony composed of silicium dioxide, (SiO2). Onyx varieties with rectilinear black and white parallel stripes are actually a part of the agate family, whereas the fully black type is what one commonly calls true Black Onyx. This is a gemstone able to deflect and channel harmful energy towards the Earth, thus providing stability. Due to this ability, Black Onyx is considered a stone of protection against negative thoughts, as well being the stone of equilibrium and inspiration. Adding a refined visible touch, the tourbillon endstone bridge on the onyx baseplate side is also engraved with a Celtic triquetra knot.

Keeping with the technical nature of all watches created by the brand, the RM019 utilizes a newly developed power reserve indicator that makes use of a differential gearing system, directly connected to the winding barrel. Via a red line etched on its surface, the direct turning of the power reserve barrel allows the wearer to easily note if the watch requires winding.

The RM 019 Ladies' Tourbillon will be available in 18 carat red or white gold cases, finished with a specially sculpted, Alcryn collared crown.