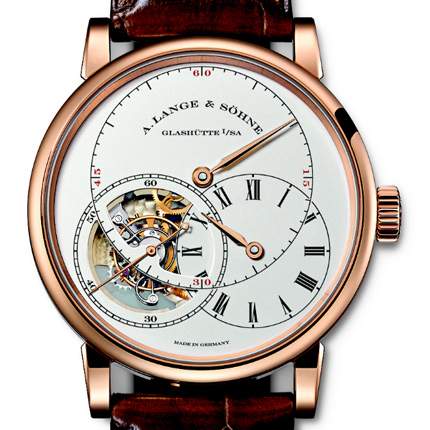 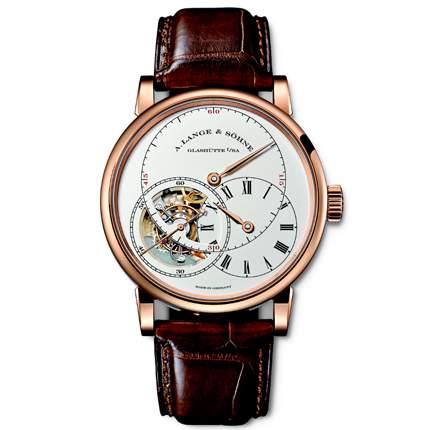 The fourth A. Lange & Söhne timepiece honoured with the distinction “Pour le Mérite” embodies a fusée-and-chain transmission as well as a tourbillon with a patented stopseconds mechanism. The underlying purpose shared by both of these grand complications is to improve rate stability and precision. The prominent regulator dial with its fascinating pivoting segment was inspired by a famous historic paragon.

There is hardly another watchmaker who can take more credit for the advancement of precision horology in Saxony than Johann Heinrich Seyffert (1751-1817). At the royal court and among scientists, his timepieces were immensely popular. His design concepts influenced the most talented artisans of his guild, elevating the art of horology in Dresden to new heights. In 1845, this trend culminated in the establishment of the first German watch manufactory by Ferdinand A. Lange. The circle of prestigious buyers of Seyffert's fewer than one hundred exquisite timepieces also included the famous explorer and naturalist Alexander von Humboldt. For his expedition to South America, he acquired a Seyffert chronometer and took the time in 1797 to travel to Dresden expressly to learn the art of navigation with a sextant and barometer. According to Humboldt's notes, Seyffert's chronometer was accurate to four or five seconds a day and when stationary, its rate accuracy even improved to less than one second in 24 hours. Even today, two hundred years later, this degree of precision is nothing short of impressive.

The regulator he crafted in 1807 is a particularly attractive exemplar. It is now part of the collection of the Mathematics and Physics Salon in Dresden. Its dial features three intersecting circles for the time indications. In its calibre, a fusée-and-chain mechanism is responsible for the constant transmission of power. This watch, with the serial number 93, was the blueprint for the RICHARD LANGE TOURBILLON “Pour le Mérite”. It reflects Seyffert's quest for horological perfection in a contemporary interpretation as an exclusive regulator for the wrist, dedicated totally to mechanical precision. The overlapping circles of the off-centre dials are what first meet the eyes of connoisseurs who study the face of the RICHARD LANGE TOURBILLON “Pour le Mérite”: the large minute circle at the top is the dominant element that hovers over the slightly smaller subdials for the seconds and hours to the left and right of the vertical centre axis. The dial layout has its origins in the precision regulators that since the 18th century were used for calibration by timekeeping services and observatories but also by manufactories for synchronising new watches. To prevent any confusion of the hour and minute hands under sometimes less than ideal light conditions, they were positioned on different axes of the dial. In the RICHARD LANGE TOURBILLON “Pour le Mérite”, a round cut-out in the seconds dial, traversed by the minute scale and by the recessed tourbillon bridge, reveals the tourbillon cage. But the tourbillon can be admired in its entirety only from twelve to six o'clock. At six, a dial segment with the Roman numerals VIII, IX, and X instantaneously pivots into the aperture to make the hour scale complete. The motion is generated by an ingenious switching mechanism, which assures that the dial segment is advanced by 90 degrees in increments of six hours.

Thanks to this remarkable feature, the watch tells the time unambiguously during the morning and the evening as well. At twelve o'clock, the hours dial segment vanishes as quickly as it appeared and for the next six hours again fully exposes the tourbillon as it concurrently revolves and reciprocates. Its task is to offset rate deviations that can potentially be caused by the effect of gravity on the balance wheel. With a patented stop-seconds mechanism, the tourbillon can be halted simply by pulling the crown, allowing the time displayed by the watch to be set to one-second accuracy. Its bearing on the caseback side is a diamond endstone secured in a screwed gold chaton. This noble setting was one of the hallmarks of the legendary Lange pocket watches that belonged to the manufactory's eminent “1A” quality category. The exceptional timepiece with the mesmerising dial bears the attribute “Pour le Mérite”, a distinction that has been conferred on a Lange watch only three times since 1994. It reverently alludes to the order of merit for extraordinary accomplishments in the sciences and arts initiated by Alexander von Humboldt in 1842.

The honour is bestowed only upon exquisite A. Lange & Söhne complications that incorporate the unique fusée-and-chain transmission. With a clever implementation of the principle of levers, it equalises the gradually waning force of the mainspring and keeps the effective torque – and thus the amplitude of the balance – constant across the entire power-reserve period of 36 hours. Moreover, a planetary gearing assures that this constant force delivery is maintained without interruption even while the watch is being wound. The captivating inner life of the filigreed marvel can be admired in detail through generously sized openings in the three-quarter plate.

With a frequency of six semi-oscillations per second, a classic screw balance, and a recalculated balance spring that is manufactured in-house, the RICHARD LANGE TOURBILLON “Pour le Mérite” fulfils all prerequisites that could possibly be imposed on a timepiece dedicated to the utmost in precision. The stately 41.9-millimetre platinum or pink-gold case accommodates the new hand-finished Lange manufacture calibre L072.1, uncompromisingly crafted to the most exacting Lange quality standards. With a diameter of 33.6 millimetres, the movement makes good use of the available space. The strictly limited edition of 100 platinum-cased watches underscores the exclusivity of this outstanding collector's masterpiece.