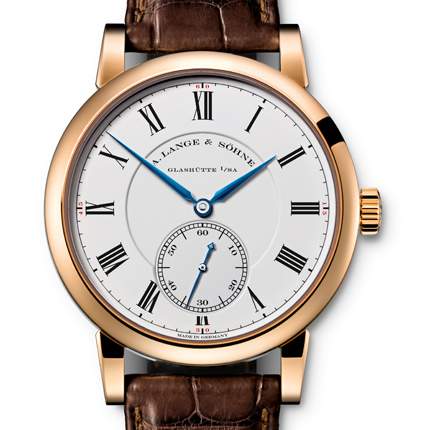 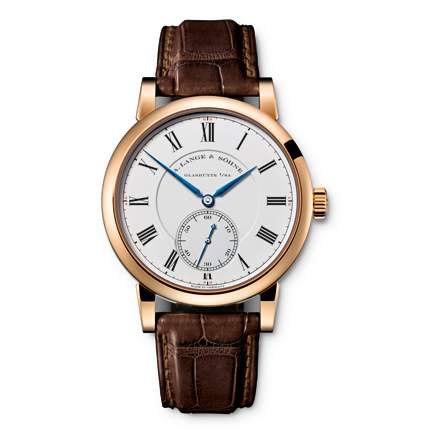 More Effective Than a Tourbillon

Thus, the second RICHARD LANGE also focuses the attention of its owner on the objective of all horological ambitions: the greatest possible degree of precision. It relies on an ingenious construction, a drive based on the chain-and-fusée principle used as early as the 15th century among others by Leonardo da Vinci. In his standard reference book “Watchmakers and Clockmakers of the World”, G.H. Baillie characterised it as follows: “Perhaps no problem in mechanics has ever been solved so simply and so perfectly”. However, it takes the ultimate in know-how and dexterity to craft this intricate mechanism in a size that can be accommodated by a wristwatch, so understandably, it is much rarer today than the tourbillon. At the same time, it is much more effective in a wristwatch because it overcomes the greatest disadvantage of the winding train – the unavoidable loss of torque – by intelligently harnessing the principle of levers.

The fusée-and-chain transmission compensates for the declining spring force, keeping the effective torque constant across the entire power-reserve period. For this purpose, the drive function, usually handled by the mainspring barrel alone, is taken over by two components: the mainspring barrel and the adjacent tapered fusée. The two components are connected by a dainty chain which in the case of the RICHARD LANGE “Pour le Mérite” consists of 636 individual parts. At one end, it is attached to the broad lower end of the fusée and at the other to the exterior of the spring barrel. A slot is milled into the conical surface of the fusée that leads to the narrowest point, much like a spiral path that leads to the summit of a mountain. When the watch is being wound, the chain unreels from the outer wall of the barrel and wraps around the fusée until – if we stick with our metaphor – it arrives at the summit of the mountain. In this state, the radius of the fusée, i.e. the magnitude of its leverage, is small but the torque delivered by the mainspring is large. As the mainspring gradually unwinds, its power diminishes. But as the chain unreels from the fusée and back onto the barrel, the length of its lever – the effective radius of the fusée – increases by the exact same measure as the spring's torque decreases. The result is constant torque at the fusée's arbor and therefore constant amplitude of the balance.

This complex system can only function flawlessly if three additional precautions are taken. The first one is a system that blocks the winding process just before the main-spring is fully wound and thus prevents the chain from tearing. In this mechanism, the vertical motion of the chain is used to actuate an intricate system of levers that block the ratchet wheel at the right moment. The second precaution is a mechanism that stops the movement before the mainspring is fully relaxed. This function is assumed by a modified power-reserve wheel that controls a stop lever. After exactly 36 hours, the lever drops into a recess in the wheel. Assisted by a spring, the longer arm of the lever moves into the engagement radius of a specially shaped finger seated on the fourth wheel arbor. The arbor is stopped when the two elements make contact. The seconds hand stays at the 12 o'clock position. Finally, the fusée-and-chain transmission needs a construction to ensure that the transmission does not stop while the watch is being wound. A complex planetary gearing inside the fusée preserves the power flow from the fusée to the movement during the winding phase. The most inter¬esting details such as the chain, the blocking mechanism, and the ratchet wheel over the fusée that incorporates the planetary gearing are visible through apertures in the lavishly decorated three-quarter plate.

A further detail illustrates the degree to which the calibre designers pursued their quest for precision: to find the optimised match of the characteristics of the mainspring and of the fusée, the 36-hour working range of the mainspring can be adjusted in the direction of higher or lower torque. This can be done by a service watchmaker with a proprietary Lange tool that engages with a pretensioning ratchet on the mainspring barrel. The setting is locked with a pawl. Located above the three-quarter plate, this mechanism is easily accessible.

The exclusive calibre L044.1 movement is powered by an indexless escapement that beats with 21,600 semi-oscillations per hour and has a power reserve of 36 hours when fully wound. It incorporates a hairspring made in-house, precisely adapted to the oscillation system and the parameters of the movement. In turn, the moment of inertia of the large balance wheel with its 18 inertia and 4 poising screws, all made of solid gold, corresponds exactly to the torque delivered by the fusée. All components of the complex manually wound movement are crafted to the highest Lange quality standards and lavishly decorated. In addition to the balance cock, the separate escape-wheel and fourth-wheel cock are engraved by hand as well. Lange's master watchmakers also apply lavish decorations on parts of the movement that are not visible. Indeed, the RICHARD LANGE “Pour le Mérite” is not only a technically sophisticated precision timekeeping instrument, it is also a stunningly exquisite horological work of art.