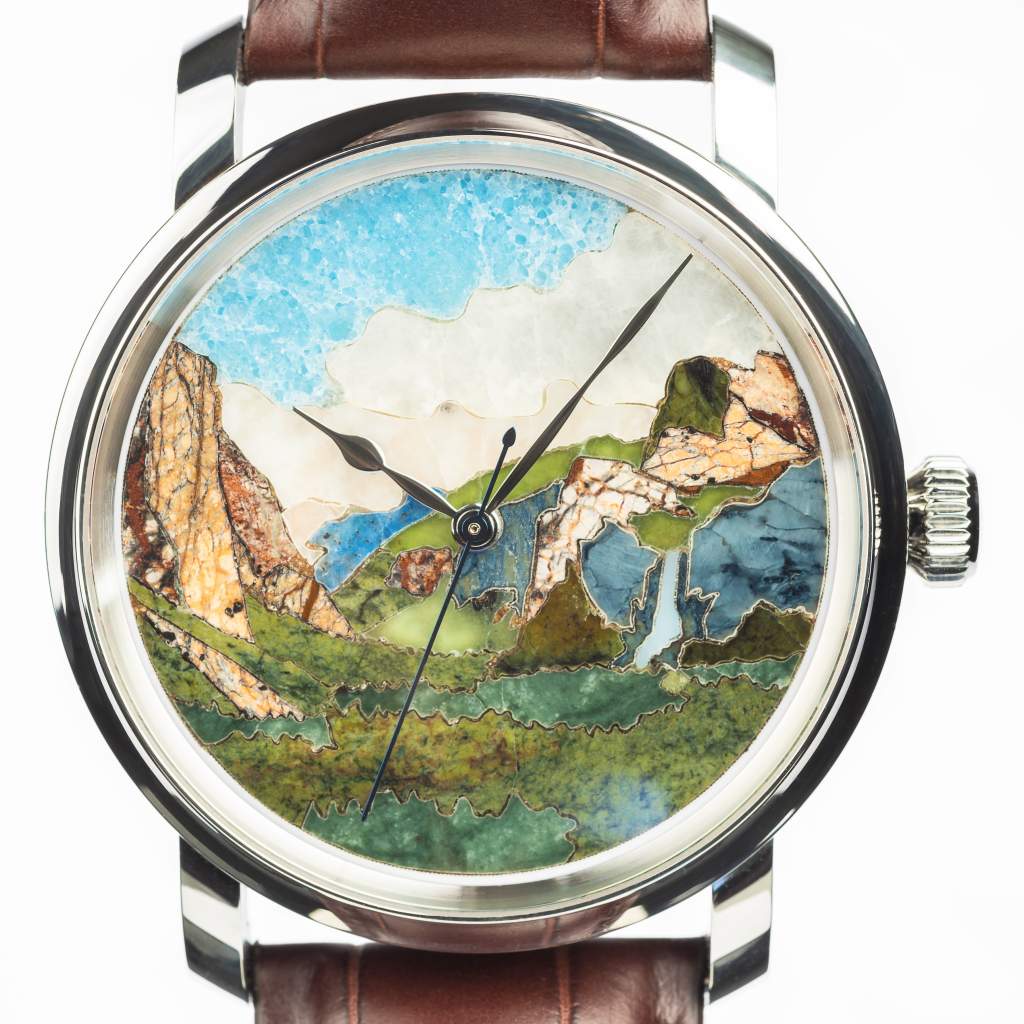 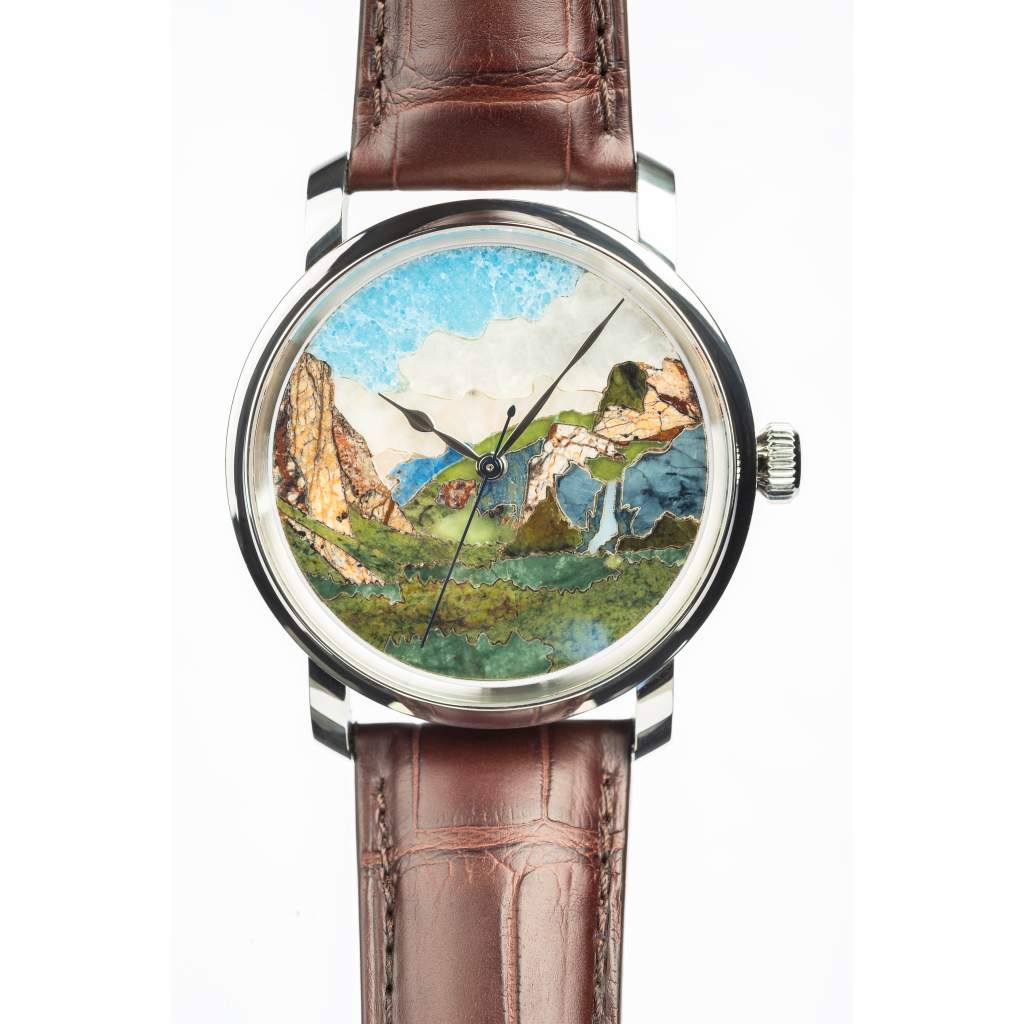 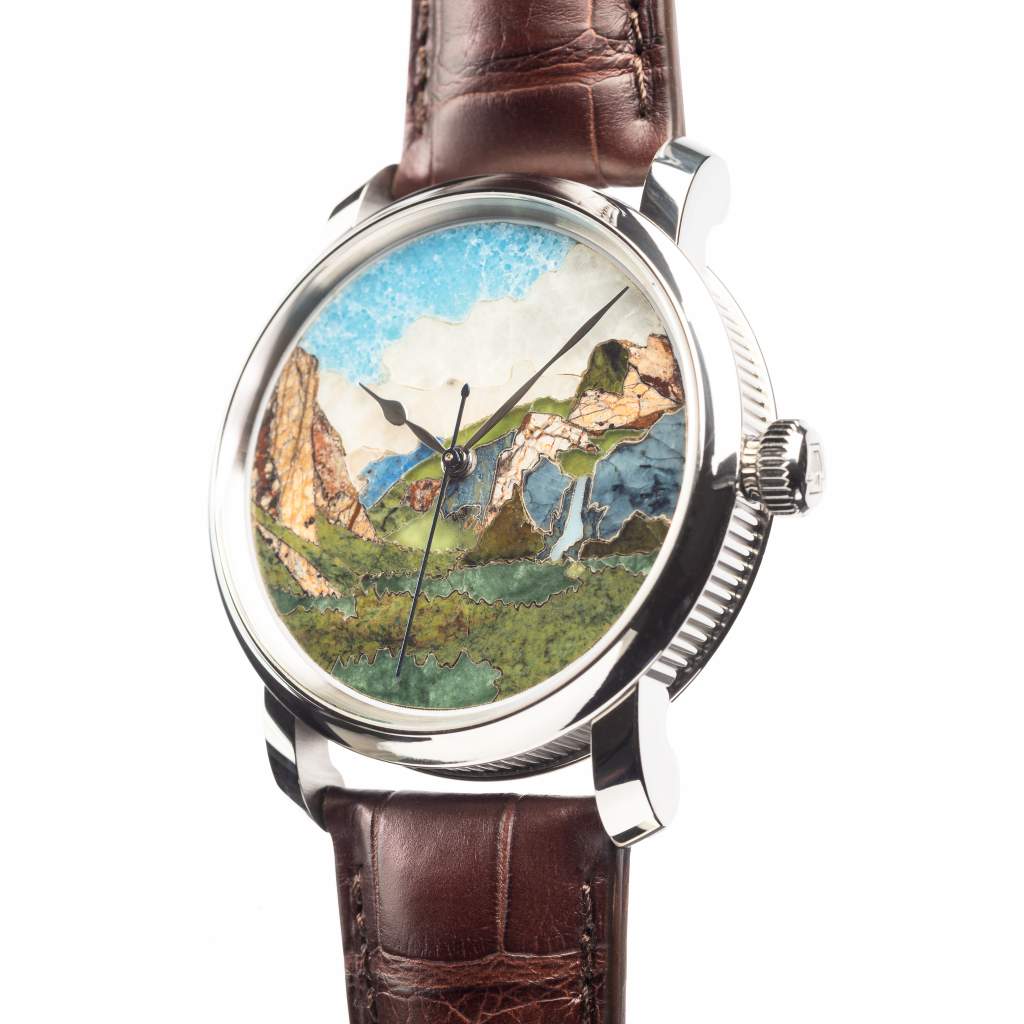 Yosemite National Park in northern California is one of the United States of America’s natural gifts. To emphasize RGM’s country of origin and provide a stunning homage to its natural beauty, Roland G. Murphy and his team at RGM have created a contemporary horological homage to it using stone marquetry on the dial of Model 25 Yosemite.

This dial offers a re-creation of one of the most iconic views of the famous national park. Called Tunnel View, it is noted for featuring three of the park’s most prominent landmarks at a single viewing: El Capitan, Half Dome, and Bridalveil Fall.

The art of marquetry uses grains, color, and texture from different types of stone to create a miniature mosaic that when put together makes a precise artistic image. Working from photography of the view, the marquetry artist who crafted the countenance of RGM Model 25 Yosemite aimed to make the final dial as realistic as possible in painstaking work using a variety of stone slivers and chips to craft color, texture, and light play. Working with stone requires great skill as each individual stone has its own specific properties and degrees of hardness: some are very hard while others are particularly fragile or brittle. The marquetry artisan must therefore have the perfect feel for them, taking these properties into account as he or she cuts, shapes, and polishes them to micron-level tolerances to become a unique work of art.

All of RGM’s Model 25 watches have an American made case with a classic coin-edge case band, a beautifully contoured bezel, and downwardly curving lugs. This case is not only made in the USA, it is made locally in Pennsylvania, home to the brand: designed by RGM, the stainless steel used is sourced in the USA and the individual case components are machined and wire-cut less than ten kilometers away from RGM’s Mount Joy, Pennsylvania workshop. The brand’s own watchmakers and technicians do the final case finish, polish, and assembly.

The solid stainless-steel case back of the watch leaves room for a special Yosemite-themed engraving of this watch, which RGM will specially create together with the two clients who buy these limited pieces.

RGM has practiced logical measures of efficiency, economy, and common sense along its 28-year journey toward becoming a manufacture, which it achieved in 2007 with the introduction of its own movements. Since then, RGM, located in the heart of the United States of America’s traditional watchmaking region, has worked to increase its production depth, manufacturing components in house where it makes sense and sourcing components from Europe and the United States where that makes sense as well. The result is an imaginative and attractive yet robust collection of both everyday watches and very special complication pieces such as tourbillons and perpetual calendars, all with extensive opportunities for individual customization due to the amount of work done by hand at RGM and the number of components the brand makes at the factory – in particular the dials.

A focus for RGM has always been its highly decorative guilloche dials, which the company has produced in-house from the beginning from silver blanks using vintage rose engines. Through specialization in components such as these, RGM has the rare ability to offer every customer the chance to have his or her dream watch.