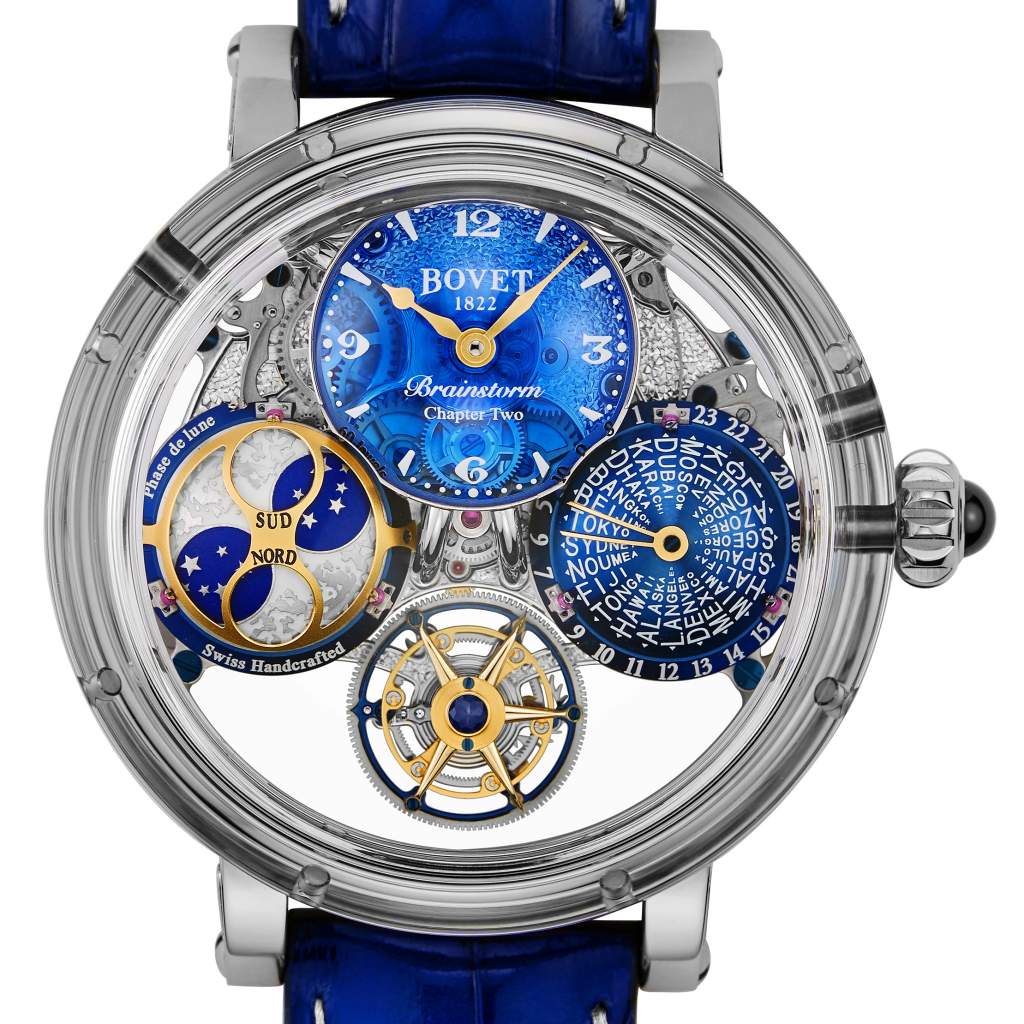 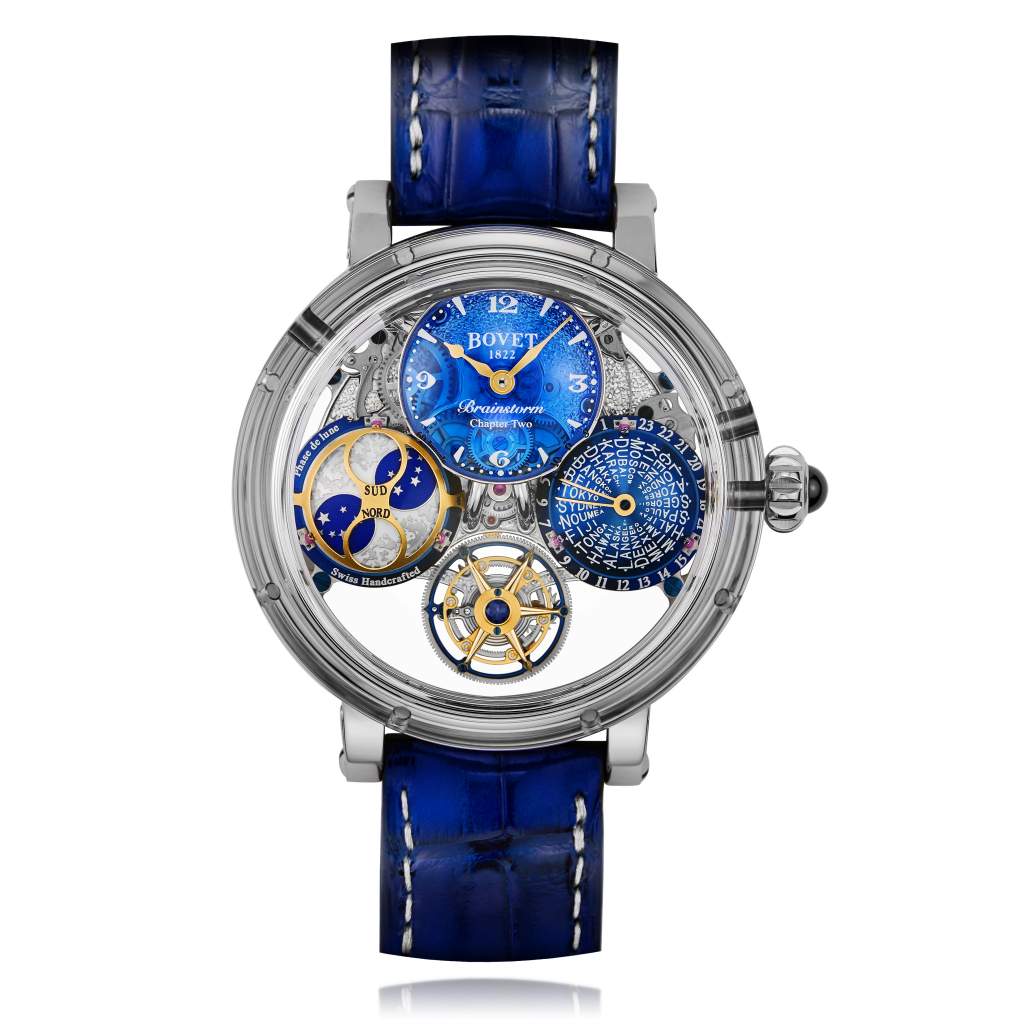 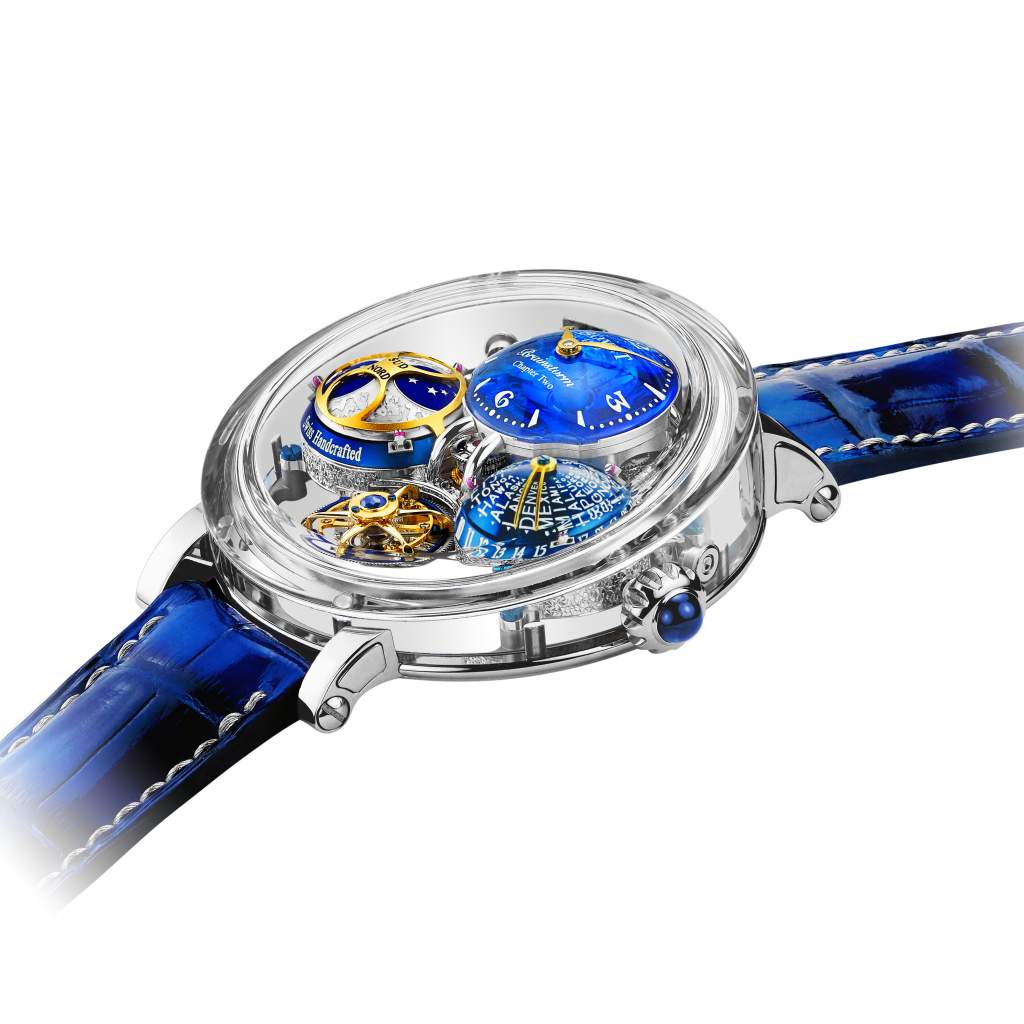 Following the lauded success of the Récital 26 Brainstorm® Chapter One, Mr. Pascal Raffy, owner of the House of Bovet 1822, and the skilled artisans of the House of Bovet are honored to premiere the Récital 26 Brainstorm® Chapter Two, presented in the iconic sloped writing case that features Bovet’s patented Double-sided flying tourbillon, a second-time zone with a twenty-four city disc, a precision moon phase while offering the chronometry of 5 days power reserve.

The House of Bovet is proud to give decorative arts, chronometry, mechanical ingenuity, and innovation their greatest acclaim since 1822. The selflessness and passion of Bovet’s craftsmen, their respect for the tradition of Haute Horology, and the care they take in the smallest of details are the reason for Bovet's exceptional high-end watchmaking.

To further increase this level of exception, Mr. Pascal Raffy, a passionate watch collector, has chosen to limit the number of timepieces crafted annually to only 800 timepieces. Mr. Raffy further redefines true luxury by creating all of its components in the Bovet's Swiss workshops, using artisanal processes, and adding the concept of exclusivity to the experience offered to each collector.

The Brainstorm Chapter Two, which perfectly embodies the fruits of this decision, has occupied the House's technical office and prototype watchmakers’ office for the past four years. Relayed by the craftsmen of the House of Bovet, they have together shown a genuine stroke of genius by managing to integrate such density of technicality, watchmaking art, and innovation into this unprecedented gem of artisanal Haute Horlogerie.

The Brainstorm Chapter Two is the second timepiece in the Bovet collection to be fitted with a sapphire crystal case in the emblematic writing case with an asymmetrical profile imagined by Mr. Pascal Raffy in 2016. The slope of its bezel allows the collector to explore new display mechanisms that guarantee intuitive and increased readability. Concentric rollers, rotating domes, and three-dimensional needles were used to express time in new ways. The protected design of the writing case opens up new horizons in terms of the very architecture of the movements, by optimizing the volume which simultaneously increases the functionalities offered, the chronometry, the reliability, and the readability.

The collector will discover the complexity of precious watchmaking mechanics from a new angle where the decorative arts illuminate the third dimension in a vision previously unexplored.

Anxious to offer useful functionalities in absolute coherence, Mr. Pascal Raffy and the development department of the House of Bovet have imagined a movement that justifies the use of the “writing slope” case entirely made of sapphire. Selected for its crystalline transparency, sapphire is, moreover, the second hardest material known after diamond and, a little known fact, it is lighter than titanium. This unprecedented choice immediately revealed one of the major challenges faced by the technicians at the House of  Bovet. If sapphire cases have been known for almost forty years, their designs have remained relatively simple, because of the machining and polishing constraints due to the hardness of the material. Achieving a complex case, especially with the asymmetrical profile of the writing case confronted engineers and technicians with difficulties and challenges that were beautifully mastered with the unveiling of the Brainstorm Chapter One in 2019 and continues today with the unveiling of the Brainstorm Chapter Two which has also been encased in sapphire for the pure pleasure and delightful exploration of the collector.

Ultimately, the middle and the glass form only one single element, 47.80  in diameter, which meticulously respects the original design of the cases in the collection. The back is made up of a bezel and four horns machined from grade 5 titanium. The sapphire crystal case opens generously to display the movement which has many secrets to reveal. To optimize transparency and ergonomics, the watchmakers of the House of Bovet decided to fix the movement at the bottom rather than inside the middle, as is usually the case. A choice they had already successfully experimented with building the luminous OttantaSei Tourbillon in 2016 and the Récital 26 Brainstorm® Chapter One in 2019. The Chapter One has been awarded numerous distinctions saluting its design and the mastering of the innovative technicality of its case material and design.

The fully developed caliber for this Brainstorm Chapter Two is entirely manufactured in the Bovet 1822 workshops and is the result of a new design. Absolute control of energy guarantees an autonomy greater than five days of power reserve by the use of a single barrel, which maintains the oscillations of the regulating structure at a frequency which has been increased to the frequency of 21,600 v/h for spectacular chronometry enhanced by the patented double-sided flying tourbillon.

The information provided by this new caliber is displayed consistently in the volume of the case. A dome dial, available in a choice of blue or green translucent quartz or blue aventurine glass, displays the hours and minutes of local time in the upper part of the case. The seconds are read by an index fixed on the tourbillon, itself, placed at 6 o'clock which makes a complete revolution, in 60 seconds. Finally, two rotating domes placed, respectively, at 3 o'clock and 9 o'clock harmoniously complete the shaping.

The dome, located at 3 o'clock, displays a second time zone, according to the construction, specifically developed for this timepiece and subject to a patent. The names of 24 cities representing the 24 time zones are printed on the rotating part of the dome which makes a complete revolution, by scanning the 24-hour graduation of the base ring. A three-dimensional V-shaped needle allows the collector to select the displayed time zone. This clever and innovative combination, united with the dome, allows optimal readability, despite the reduced diameter of the entire display. In addition to a second time zone display, this new display also offers the world time function, which allows the time in each of the 24 time zones to be read simultaneously. An intuitive indication that has never found a better justification than at the time of ultra-connectivity.

In perfect symmetry, the moon phase indicator is positioned at 9 o'clock and is also displayed by a rotating dome. The surface of the lunar ground is engraved by hand before luminescent material is applied, also, by hand. The two circular windows which overhang the dome make it possible to read the age of the moon according to the specific orientation of its crescent, whether one is in the northern hemisphere or the southern hemisphere of the earth. The precision mechanism that drives this dome gives it an accuracy that requires a correction of one day every 127 years!

The domes of the second time zone and the moon phase rotate by the patented mechanism of the radial guidance system. Three rollers, in rubies adjustable by a micrometric screw, are arranged on the circumference of each dome. They ensure centering and the rotation minimizes friction and therefore, freeing the interior volume of the globes, which increases the chronometry and the power reserve of the timepiece.

The five days of the phenomenal autonomy of this combination of great complications are displayed by an indicator, subtly, positioned in the middle of the case between the two strap lugs. A position that gives full meaning to the use of the sapphire crystal case. The indicator index runs linearly, while its engraving is gradually directed on the edge of the movement.

Whether it is design or technicality, the resolutely innovative and modern character of the Brainstorm Chapter Two offers itself perfectly to artisanal watchmaking respecting the traditions, which has made the House of Bovet a success since 1822. The decorative arts, the finishes, and the engraving by hand are a standard of expression directed by the three-dimensional aspect of the movement and its case. Whether flat, inclined, convex, or vertical, all the surfaces that allow this are technically engraved by hand with the emblematic "broken glass" motif. Polished pillars, translucent gems, and delicately satin steels contrast with dazzling elegance. At the back of the timepiece, the bridges are perforated and engraved with a delicacy that commands respect. Respect for the centuries-old tradition of the noblest expression of fine art watchmaking by Mr. Pascal Raffy and the craftsmen of BOVET 1822.

Such a level of excellence can only be achieved at a certain scale. Therefore, a total of only 60 movements will be produced for the Brainstorm Chapter Two. They will be distributed among the 47.8mm-diameter sapphire case, limited to 30 timepieces, with a choice of blue quartz, green quartz, or blue aventurine glass dial, by respective limited editions of 10 timepieces. As usual, collectors may bespoke their timepieces and thereby acquire unique pieces. Regardless, no more than 10 of any single style made from these 60 movements will be crafted.

An exclusivity that responds to the definition of real luxury as conceived by Mr. Pascal Raffy and the artisans of the House of Bovet1822.