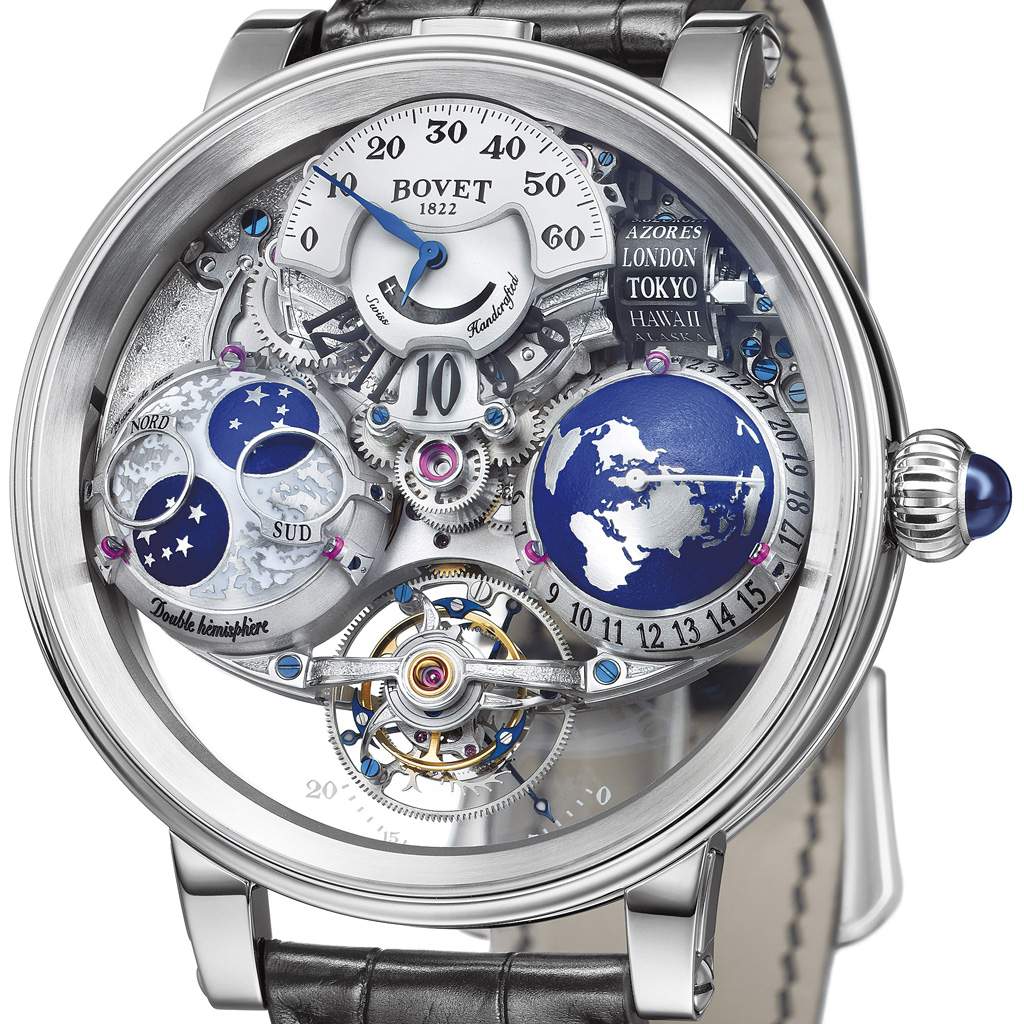 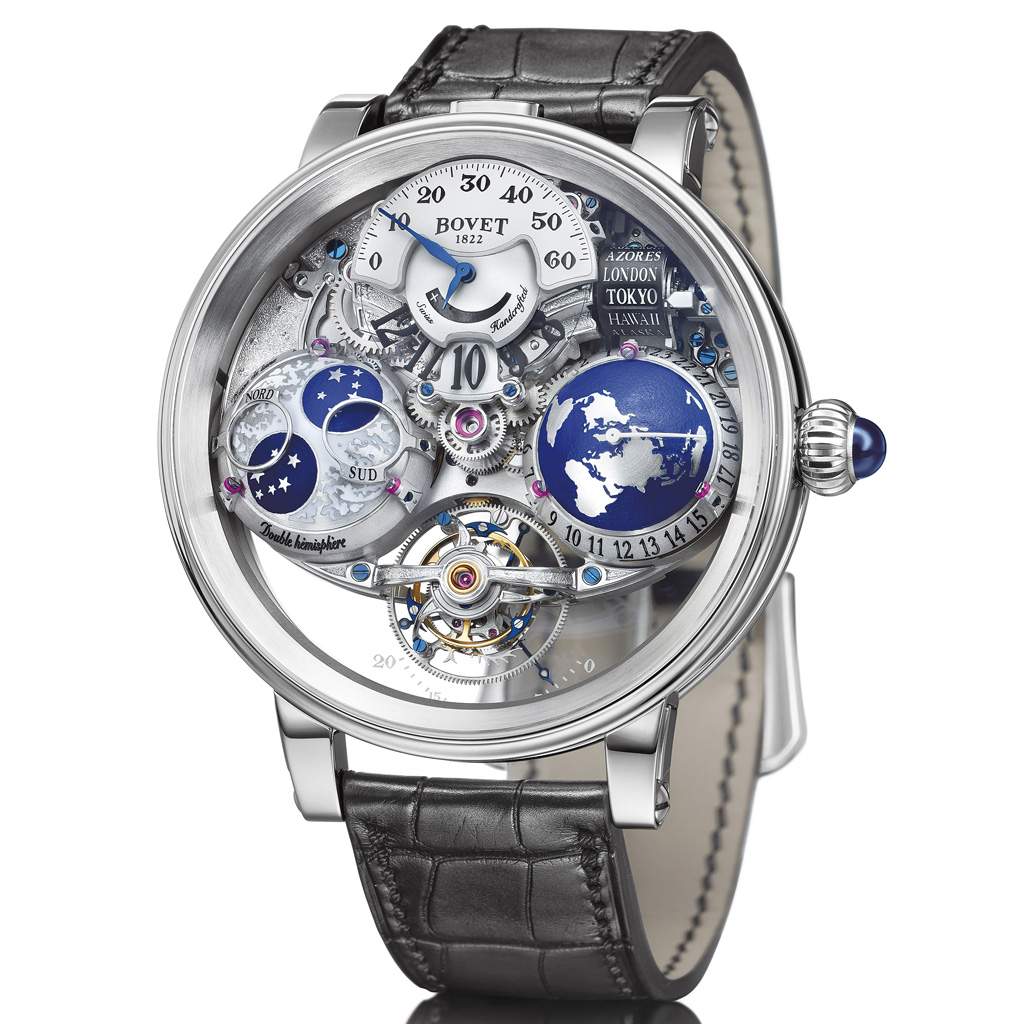 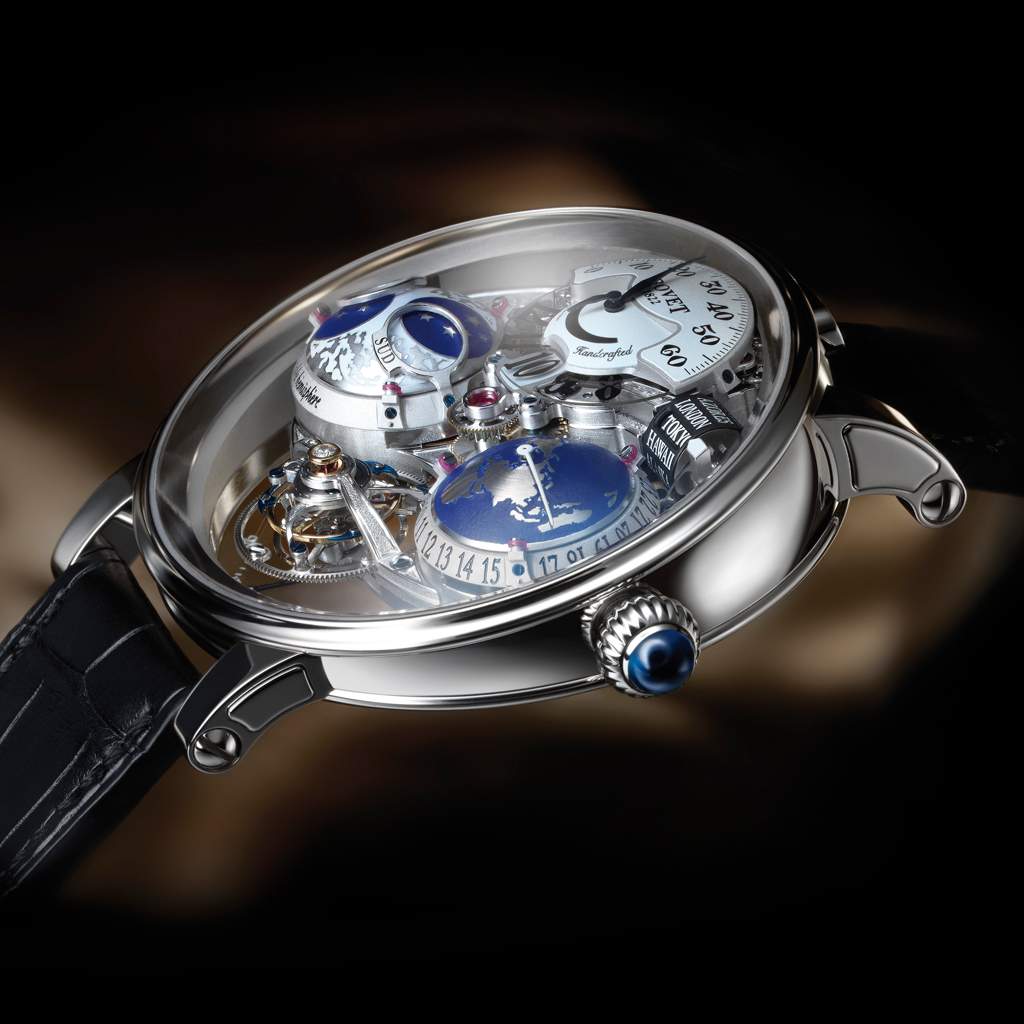 In this timepiece, the complications work together to ensure fully intuitive functionality and use. The jumping hours and retrograde minutes enable the wearer to read off local time quickly and clearly.

Offering a new interpretation of universal time, a map representing the entire Earth contained in a single hemisphere has been specially created for this timepiece. It rotates over 24 hours inside a fixed ring divided into 24 zones. For enhanced comfort and functionality, an assignable time zone is indicated by a hand that follows the chosen meridian, its tip pointing to the time in the chosen time zone. Meanwhile, a concentric dual-roller city indicator clearly displays the name of a town situated on the meridian indicated by the hand.

Providing a logical complement to universal time, a highly precise double moon phase indicator (north/south) has also been added directly opposite on a second rotating hemisphere.

Enhanced realism and user comfort is provided by the engraved lunar reliefs and oceans. The surface of the moon is outlined in white Super-LumiNova while the sky and oceans have been meticulously coated in blue Super-LumiNova. As a result, the portrayal of the Earth and its satellite is strikingly realistic, even at night.

The list of complications continues with a 5-day power reserve indicator and a tourbillon oscillating at 21,600 vph. The latter is supported by a hand-engraved bridge, whose vaulted form harmoniously and symmetrically matches the hemispheres suggested by the moon and the Earth, as well as the local time dial.

The Recital 18 Shooting Star® was designed to be a truly functional traveler’s timepiece. A corrector at 12 o’clock and another at the center of the crown facilitate setting the timepiece to universal and local time, so that any one indication can be changed without ever affecting the others.

Two specific patents were filed for this caliber, which was manufactured entirely in-house (see attached press release for details). One concerned the adjustable ruby runners that enable the rotation of both hemispheres by liberating their central axis. The second was for the ingenious corrector system integrated into the crown that delivers constant and separate power to the two mechanisms it drives, ensuring a perfectly optimized and secure ensemble.

The movement’s architecture was designed to highlight our planet and its satellite—an atypical concept enhanced by the truncated case-side.

All the components making up the movement and exterior of this timepiece were developed and manufactured by BOVET 1822 and its Manufacture DIMIER 1738. The movement itself is entirely hand-engraved with a poetic vision of the stars.

Only 50 of these movements will be manufactured (across the entire range of models).