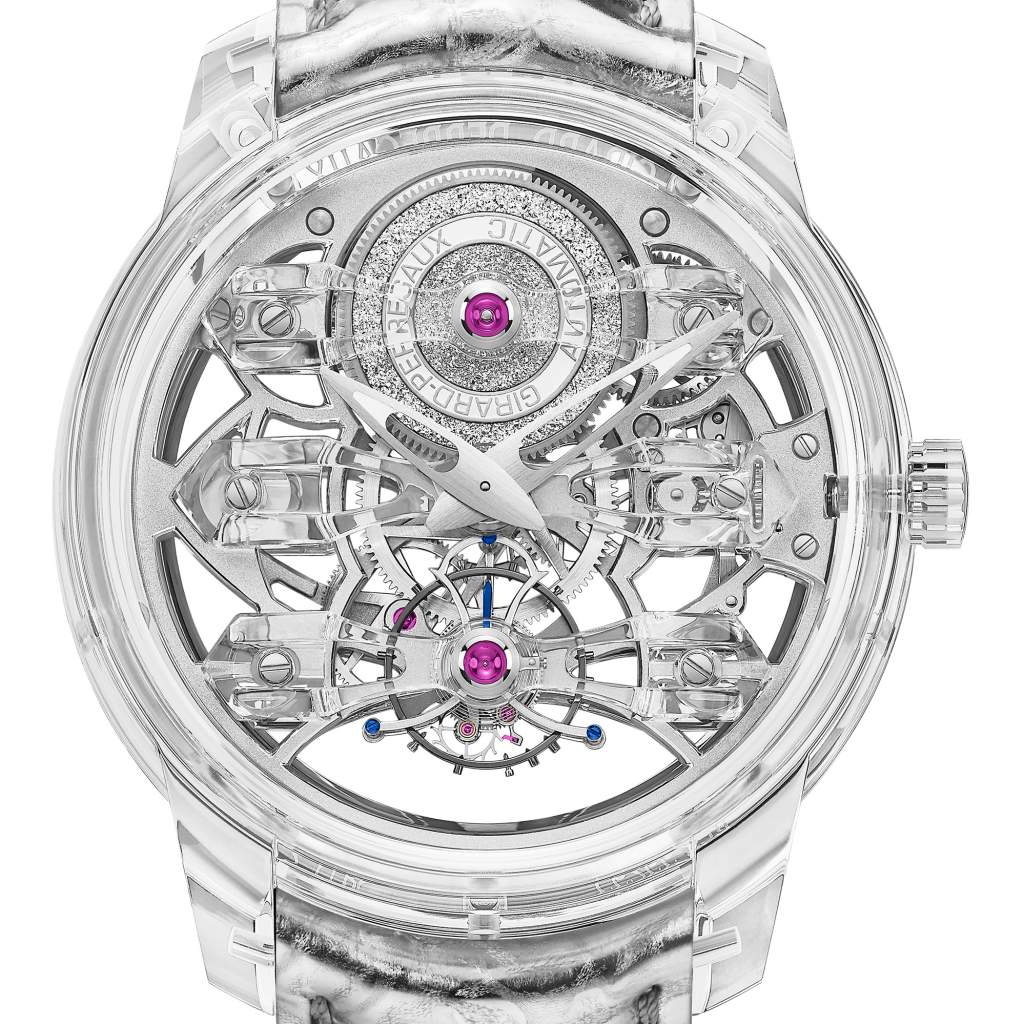 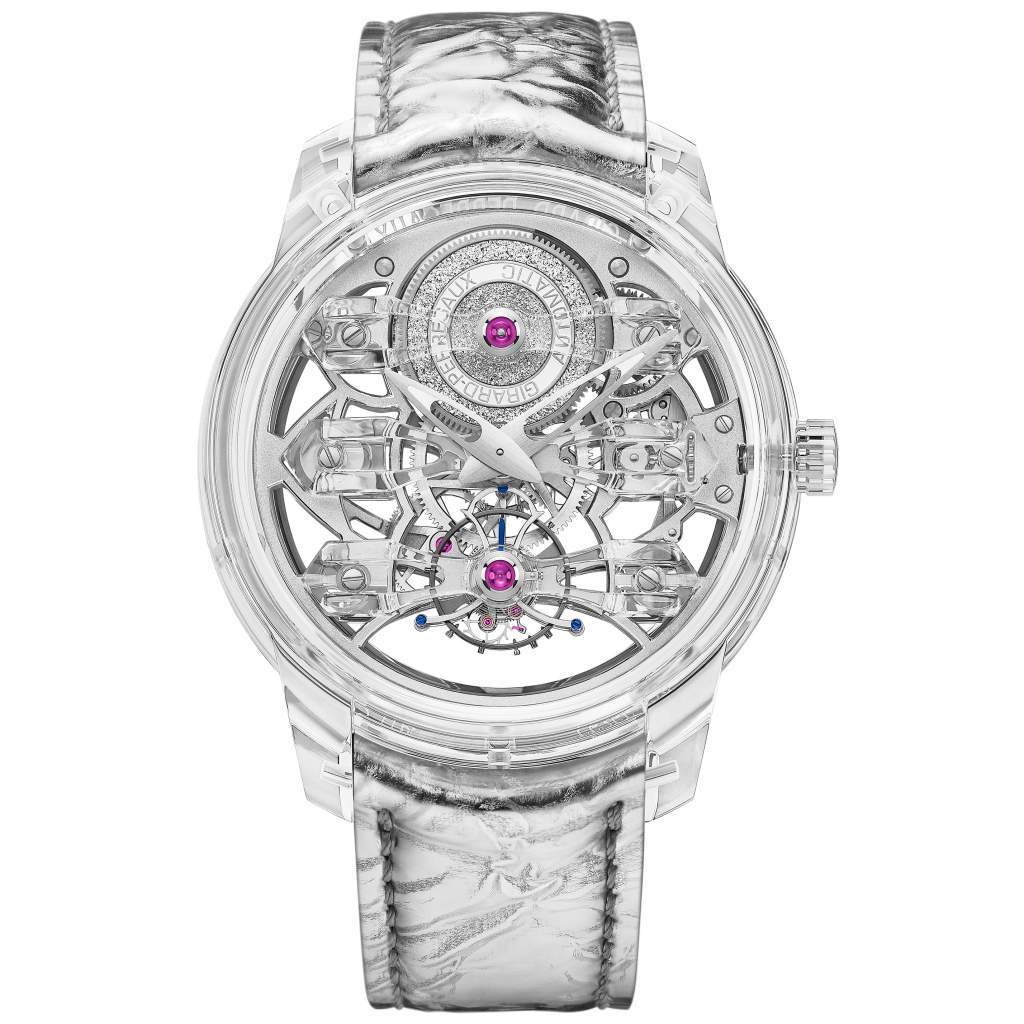 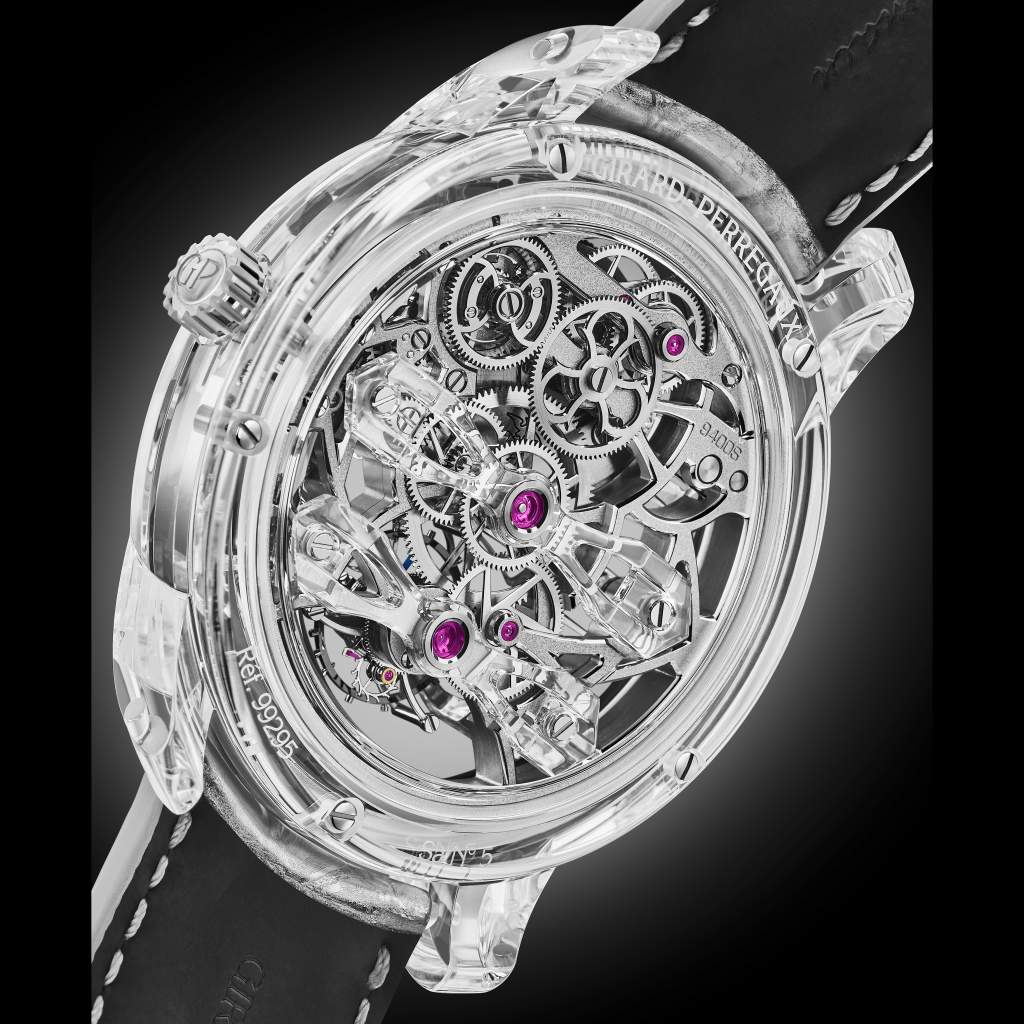 Transparency to the extreme

The ability to reveal the art in precision engineering is among Girard-Perregaux’s greatest achievements. The Quasar Light honours this legacy by engineering transparency to the extreme. Named after the most brilliant of astronomical entities - the Quasar – it is an epic masterpiece with gleaming aerial views of the Manufacture’s most iconic movement encased in Swiss-made Sapphire, exclusively available in just 18 pieces.

Like its namesake, the Quasar Light outshines all others in its class. The glittering tourbillion appears to float inside an invisible case made from a single sapphire disk. Sculpting and polishing its curves to produce such extreme transparency required over 200 hours of work and hundreds of operations with techniques perfected over two centuries.

Viewing its sensational aerial volumes feels as if stargazing through a telescope. The sapphire crystal box that extends from the case delivers this intergalactic 360° view.  Achieving the perfect gloss within the movement required three times more sapphire than standard with a unique diamond and chemical polish.

The watch glitters with starry lustre when light radiates across its movement and Ruthenium barrel. Selected for its diamond-like brilliance, Ruthenium is a rare platinum metal in extremely limited production. It forms dazzling crystals that burst with sparkling light in all directions on the watch face.

The arrow shape of the Aerial Neo-bridges, a Girard-Perregaux signature, were inspired by architectural marvels in the world’s greatest cities. Finished yet again in Swiss-made sapphire, the bridges reveal the smallest details of the mechanism with a light, but powerful presence on the wrist.

The tourbillon cage is powered by a unidirectional automatic winding system featuring a micro-rotor made of white gold. Visible through the sapphire crystal box, the micro-rotor is engraved with an eagle – an instantly recognisable hallmark of the Swiss Manufacture.

The Quasar Light is a brilliantly bold expression of the technical mastery, contemporary design and rich heritage that exemplifies Girard-Perregaux. The 18 exclusive pieces are now luminous stars at the centre of an entirely new galaxy of watchmaking excellence.

Founded in 1791, Girard-Perregaux is one of the oldest fine watchmaking manufactures still in operation in Switzerland today. Our history is dotted with exceptional creations that bridge aesthetics and functionality to reveal the value of time. These include the iconic Laureato, born in 1975, as well as our Tourbillon ‘With Three Gold Bridges’ which made the invisible visible, transforming bridges from just a technical element to an integral part of the timepiece - a first in watchmaking. Girard-Perregaux’s place at the vanguard of horological innovation is confirmed by over one hundred recorded patents, and the innumerable prizes and distinctions we have received. We remain one of the rare watchmakers to retain Manufacture status for over two centuries by mastering all the required horological skills in-house. Our timepieces today push the boundaries of watchmaking for modern living.

Girard-Perregaux is part of the Kering Group, a world leader in luxury apparel and sustainability.