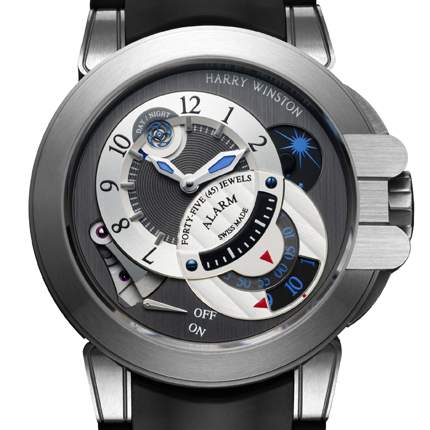 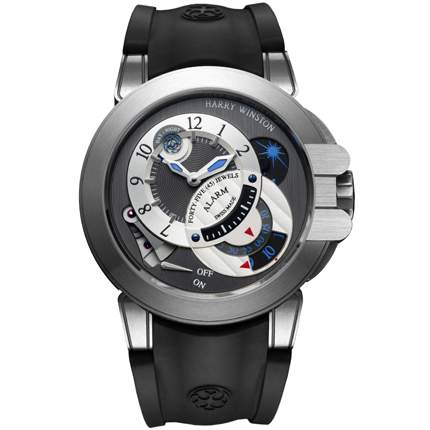 A zirconium-based alloy also used in aeronautical engineering, the hypo-allergenic and corrosive resistant properties of Zalium allow for the creation of watches with ultimate durability and design. The ultra-light metal is known for its lustrous gunmetal finish and is exclusive to Harry Winston timepieces. Project Z6 introduces a new complication to Harry Winston's timepiece offering – a hand-wound, 24- hour alarm clock movement developed specially for Project Z6 and exclusive to Harry Winston Timepieces. Comprised of 340 pieces, the intricate movement is meticulously engineered to optimize performance, with the function and complication developed from scratch and fully integrated. The 45 jewel movement is engraved Harry Winston and hand finished with Côtes de Genève even on the bridges. The bridges are hand polished and each part is chamfered to enhance the beauty of the movement.

Producing a crisp sound, the alarm clock is set with the crown and activated by using a repeater-style trigger positioned on the case at 4 o'clock. Designed to be seen -- not only heard -- a visible hammer is fixed to the case to show the alarm ringing and enhance exterior sound transmission. The monobloc bell is crafted from one rectangular piece, resulting in better sound amplification. When the movement is fully wound, the alarm will last approximately 20 seconds. Further emphasizing the practical functionality, the double barrels guarantee a 72-hour power reserve and ensure the complication will not disrupt the movement timekeeping. The two barrels can be wound at the same time, for added convenience.

The excentered dial features two overlapping disks displaying the primary time and the alarm clock, each with separate day and night indicators. Both hour/minute time and alarm time are conveniently set by using the crown, and can be wound clockwise or anticlockwise. Composed of 18 layered parts, the complex dial uses five different finishes to create a highly dimensional design: Côtes de Genève, silver vertically brushed, slated brushed, blued steel and satin finished. The 44mm case is set on a rubber strap enhancing the masculine, sportive look.

The Project Z6 is a limited edition of 300 pieces: 250 with anthracite dial available at authorized dealers and 50 with silver dial exclusive to Harry Winston salons.