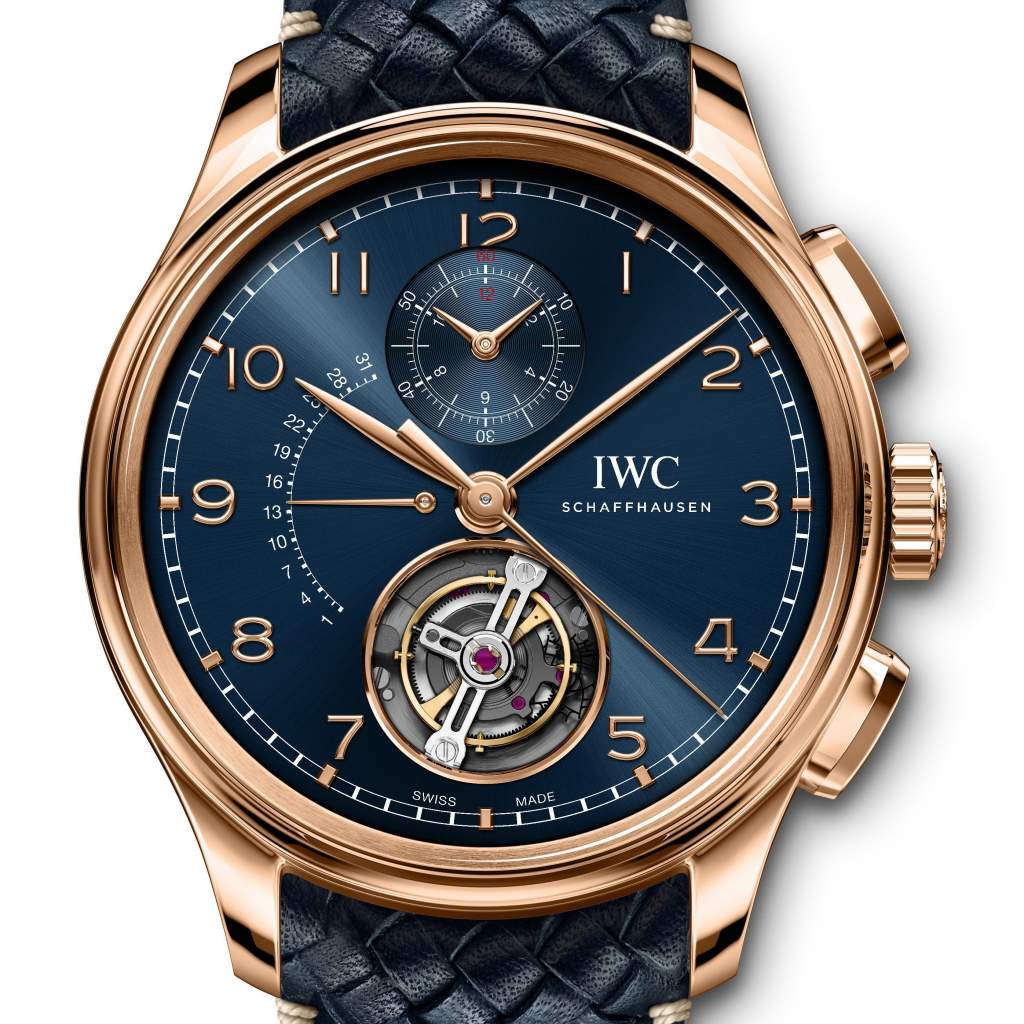 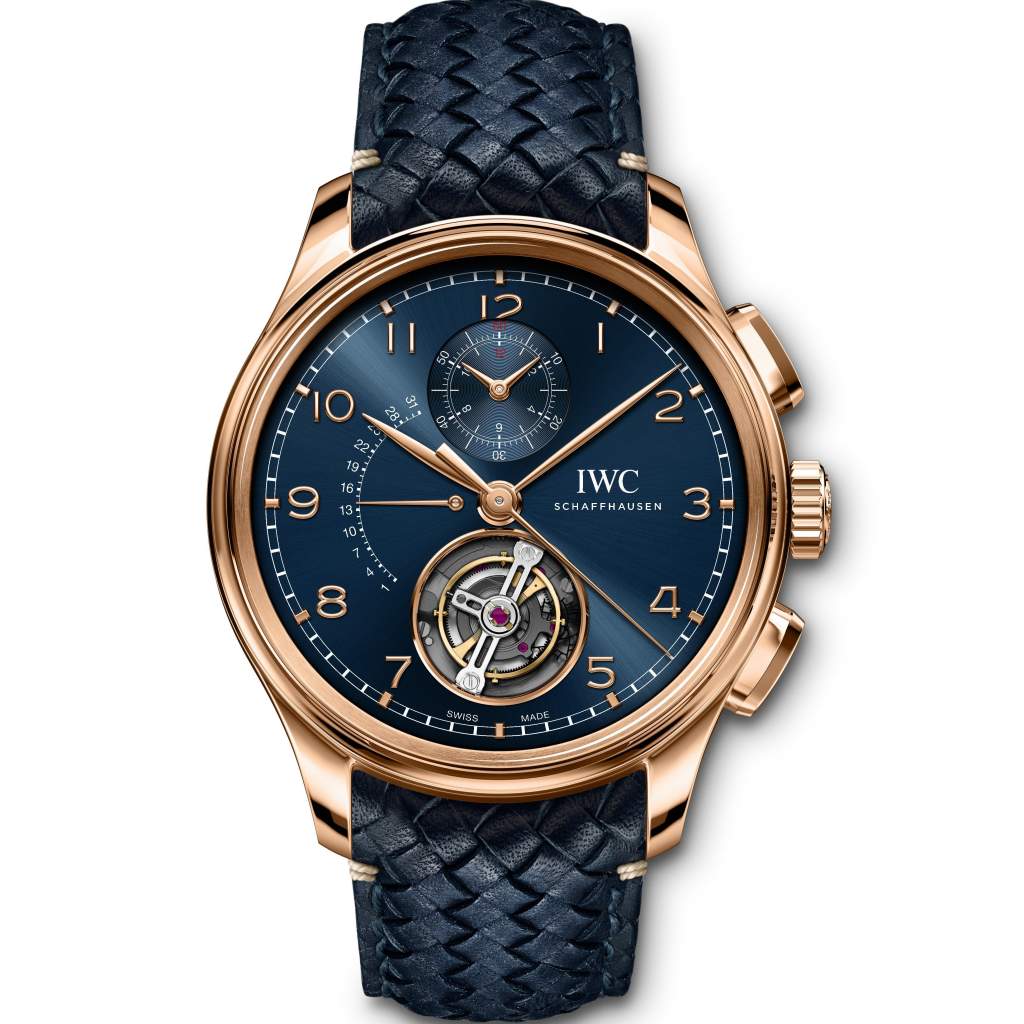 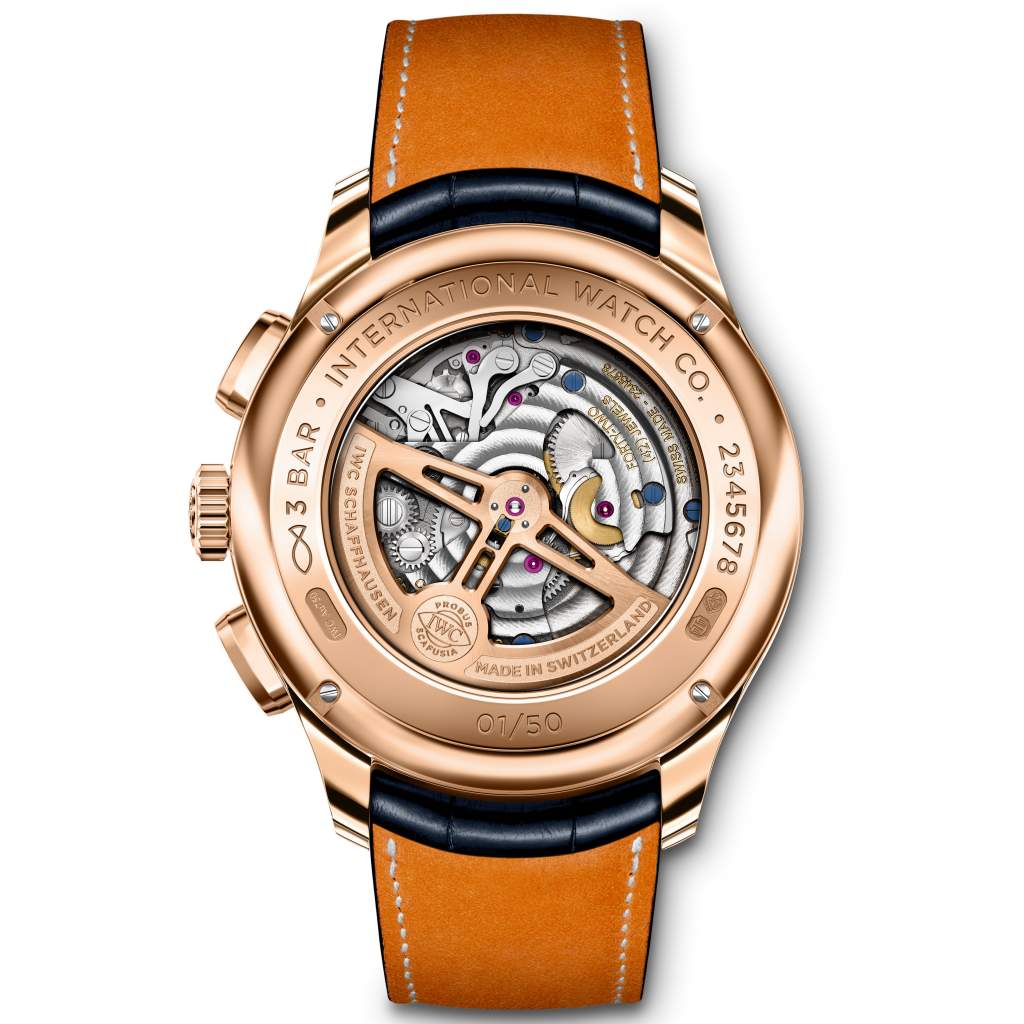 Only a few complications in Haute Horlogerie are as fascinating as the tourbillon. The "whirlwind" involves the balance wheel rotating around its axis in a cage. This not only provides a visual spectacle on the dial. The constant rotation reduces the influence of gravity on the oscillation system and increases the accuracy of the timepiece. The Portugieser Tourbillon Rétrograde Chronograph features a flying hacking minute tourbillon at "6 o'clock". Additionally, the model is equipped with a retrograde date display and a chronograph with flyback function. The special edition in a nautical design in dark blue and gold is limited to 50 pieces and available exclusively in IWC boutiques. The case is made of 18-carat Armor Gold®. Thanks to an improved microstructure, this material has significantly higher hardness values than traditional gold alloys. The blue dial, the gold-plated hands and appliqués in 18-carat gold further underscore the maritime character of this exclusive timepiece. The self-winding IWC-manufactured 89900 calibre boasts a power reserve of 68 hours. The pallet lever and escape wheel are treated with Diamond Shell® technology, which reduces friction and improves the flow of energy in the movement.

The 89360 calibre, introduced in 2007, was the first manufacture chronograph movement to be completely developed in Schaffhausen. In this movement, the hours and minutes are combined in a totalizer at 12 o’clock. This makes it just as easy to read a stop time of 8 hours and 54 minutes as it is to check the current time. The 89365 version features the stop minutes and seconds function as well as a flyback function. Further developments to the 89800 calibre eventually involved incorporating the big digital date and month display as used, for example, in the Portugieser Perpetual Calendar Digital Date-Month. Other complications can also be found in the 89630 calibre with perpetual calendar and the 89900 with tourbillon. This can be adjusted to the second thanks to a stop mechanism.

The hacking tourbillon makes it possible to stop the tourbillon at any time, with the balance and cage in any position. Until now, for IWC tourbillon watches, pulling out the crown would stop the hour and minute hands, but the gear train would continue to run. Now, the balance, and thus the entire gear train including all hands, is also stopped. When the crown is pulled out, the mechanism is stopped by two levers that grip the balance rim like a set of pliers.

Only a few designs are absolutely timeless. With the Portugieser, IWC created an icon in the late 1930s. The basis for the Reference 325, which was delivered to two business men from Portugal – hence its name – was a hunter pocket watch caliber. Inspiration for the clean, open, highly functional dial came from the deck watches IWC was producing for the British Royal Navy at the time. From the outset, the Portugieser had the typical stylistic features of a pocket watch, coupled with the high precision and easy readability of a nautical instrument.

Over its 150 year history, IWC Schaffhausen has developed a reputation for creating functional complications, especially chronographs and calendars, which are ingenious, robust and easy for customers to use. A pioneer in the use of titanium and ceramics, IWC today specializes in highly engineered technical watch cases manufactured from advanced materials, such as titanium-aluminide and Ceratanium®. Preferring the principle of “form follows function” over decoration, the Swiss watch manufacturer’s timeless creations embody their owners’ dream and ambitions as the journey through life.