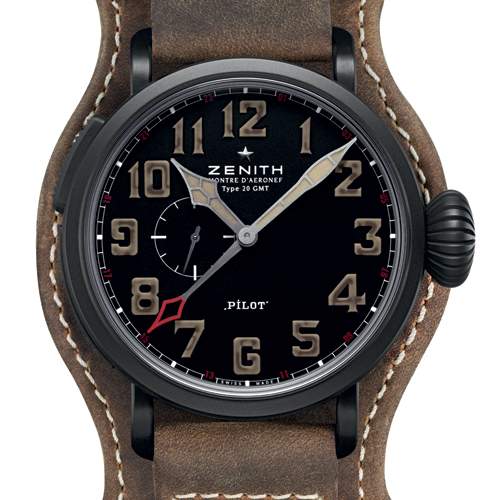 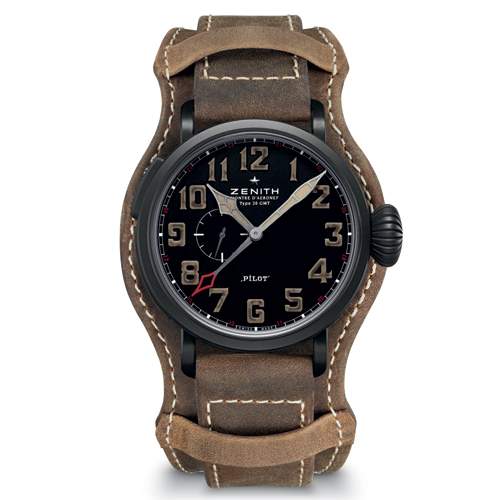 Since its founding in 1865, the Manufacture Zenith has been part of all the dreams and daring endeavours that transform utopian dreams into reality. Among the human adventures that have punctuated its history, there is one particular conquest that the brand accompanied right from its beginnings in the early 20th century: that of the SKIES. Driven by the same enterprising spirit as these pioneers who gave life to Icarus’ dream of flight, Zenith pays tribute to the Wright brothers through a watch issued in a 1,903-piece limited edition: the Pilot Montre d’Aéronef Type 20 GMT 1903.

In their bicycle shop in Dayton Ohio, Wilbur and Orville Wright dreamed of wide-open spaces and freedom. These natural-born inventors conceived a first glider that they launched on the Kitty Hawk dunes in North Carolina. At the same time, they built a wind tunnel to study various technical aspects such as the profile of the wings. Constantly perfecting their prototypes, they installed a stabiliser at the front of a second glider, and then a steering rudder at the back of a third that could thus be controlled: a world first in the field of aeronautics! After hundreds of trials, the two brothers decided to move a step forwards by equipping their glider with an engine. Lying face down on the lower wing of the twin-propeller aircraft named “Flyer”, Orville Wright achieved the first powered, heavier-than-air controlled flight in history, on Kitty Hawk beach. The young man covered a distance of 40 metres at a height of 60 centimetres off the ground. The date was December 17th 1903. Representing a major milestone in aviation history, the year 1903 now gives its name to a timepiece created by Zenith as a tribute to the Wright brothers: Pilot Montre d’Aéronef Type 20 GMT 1903.

Zenith was one of the first watch manufacturers to create flight instruments to equip various aircraft and spaceships manned by the aviation pioneers. Known for their precision and exceptional ability to withstand vibrations, magnetic fields and variations, Zenith’s altimeters, onboard watches and chronographs, as well as its wristwatches, became extremely popular with pilots, who were thus accompanied in their feats by the brand with the guiding star. In just over a century, Louis Blériot, Morane and more recently Felix Baumgartner, have fulfilled their destiny and put their name in the history books with a Zenith instrument on their wrist or on their cockpit controls.

A cult watch among collectors, the Pilot Montre d’Aéronef Type 20 played a key role in the burgeoning airmail business, and was fitted as of 1939 on the instrument panels of a number of aircraft, such as the Caudron trainer planes used by the French airforce. What could be better than this aeronautical legend to inspire a timepiece paying homage to the Wright brothers? Drawing upon these historical roots, the Pilot Montre d’Aéronef Type 20 GMT 1903 features a case made of black DLC-coated titanium that is therefore ultra-light despite its 48 mm diameter. The ratcheted crown typical of historical aviator watches ensures a perfect grip even with pilot’s gloves. The five-times sandblasted black dial reproduces the generous original Arabic numerals ensuring perfect readability by day or night. The luminous glow of these delightfully vintage figures stems from a first “old radium” treatment covered with a more classic Superluminova treatment. The effect is fascinating and the resulting appearance truly unique, since this ingenious combination creates a creamy shade enlivened by tiny retro accents that cannot be identically reproduced from one watch to the next. Each dial thus becomes unique and further heightens the exclusive character of the 1,903-piece limited edition, with the individual number appearing on a special plate screwed to the side of the case middle, like an aircraft rivet.

Actively partaking in all manner of dreams and adventures, the Pilot Montre d’Aéronef Type 20 GMT 1903 is also an invitation to travel thanks to a second time-zone indicator powered by an accurate and reliable automatic movement: Elite Calibre 693. Finely adorned with a Côtes de Genève motif even though it remains hidden from sight, it ticks off time at the rate of 28,800 vibrations per hour and has a 50-hour power reserve. Beneath this elegant mechanical heart, the case-back is adorned with a stamped insignia depicting Orville Wright aboard the “Flyer”, with his brother Wilbur running along Kitty Hawk beach to follow the feat being accomplished on December 17th 1903.

A sturdy wristband crafted in beige suede leather sets the finishing touch to this model. Its lining features a heat-embossed motif in which connoisseurs will note the inscription “Zenith Flying Instruments” as well as the brand’s historical logo, thus underlining the spirit of an era in which the skies were still waiting to be conquered.