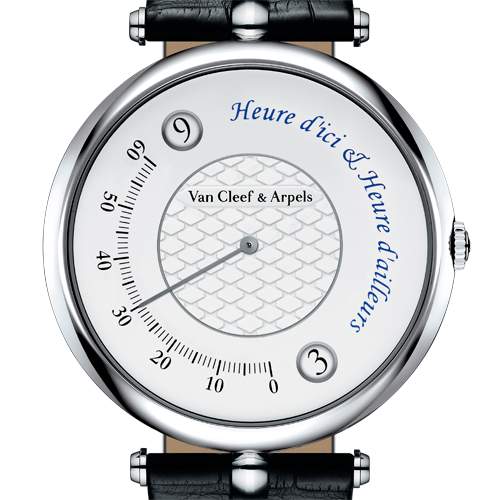 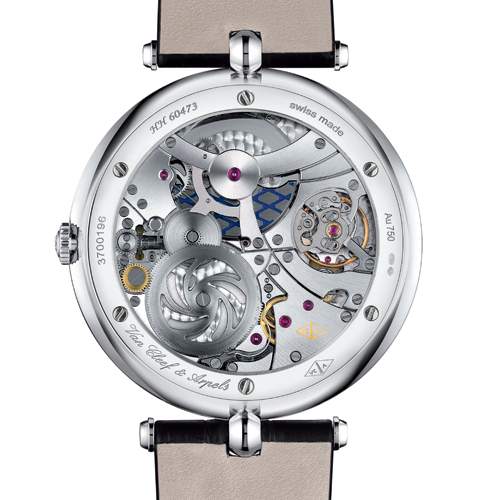 With this new Heure d’ici & Heure d’ailleurs timepiece, the Maison presents an understated and poetic interpretation of travel – the way that Pierre Arpels appreciated it. Inspired by the curiosity for the cultures of the world that has characterized Van Cleef & Arpels since its foundation, he crisscrossed the globe in response to the orders of the Maison’s leading customers. One notable example occured in 1966, when Van Cleef & Arpels was chosen to produce the crown jewels for the Empress Farah Pahlavi of Iran, whose coronation was to take place the following year. Over the course of six months, Pierre Arpels made 24 journeys to Tehran, during which he carefully selected stones from the National Treasury – held in the Central Bank of Iran – and then installed a veritable workshop in the Treasury building. He also journeyed to India, where he roamed the country with his brother Claude, in search of the most beautiful precious stones.

Today, the Maison has striven to express this vision of Elsewhere while respecting the timeless aesthetic characteristics of the Pierre Arpels collection: lines of exceptional purity, the thin case held by central attachments and the piqué motif at the center of the dial, evoking both a black-tie shirtfront and the Van Cleef & Arpels hallmark.
This new creation also displays other stylistic elements typical of the Maison, such as asymmetry – often found in its jewelry pieces – and the cursive script for the name of the watch, paying homage to the poetry of words.The same quest for elegance is apparent in the single crown, which provides a means of winding the movement and setting both the minutes and the two time zones, while illuminating the case’s circle with a diamond.

For the first time, the Pierre Arpels collection welcomes a dual time complicated watch, reflecting Van Cleef & Arpels Poetry of Time. Developed in partnership with Agenhor (Atelier Genevois d’Horlogerie), this exclusive self-winding movement is distinguished by its double jumping hour and minute retrograde display. The hour that acts as the reference – displayed in the aperture at the top of the dial – and the hour of the second time zone that appears in the lower aperture both jump at the same time, thanks to a single sector that synchronizes the two hour discs and the retrograde minute hand. When the latter reaches 60 minutes on the graduated scale, it returns to its starting position at the same instant that the hour display changes. In order to maintain the thinness of the case – a distinguishing feature of the Pierre Arpels collection – the automatic movement is equipped with a platinum micro-rotor that takes up remarkably little space. By oscillating in two directions, it can supply energy continuously. The movement, which is visible through a sapphire crystal, is adorned with a snailed pattern on the bridges, the Van Cleef & Arpels hallmark and a blue lacquered design on the micro-rotor that echoes the piqué motif on the dial.