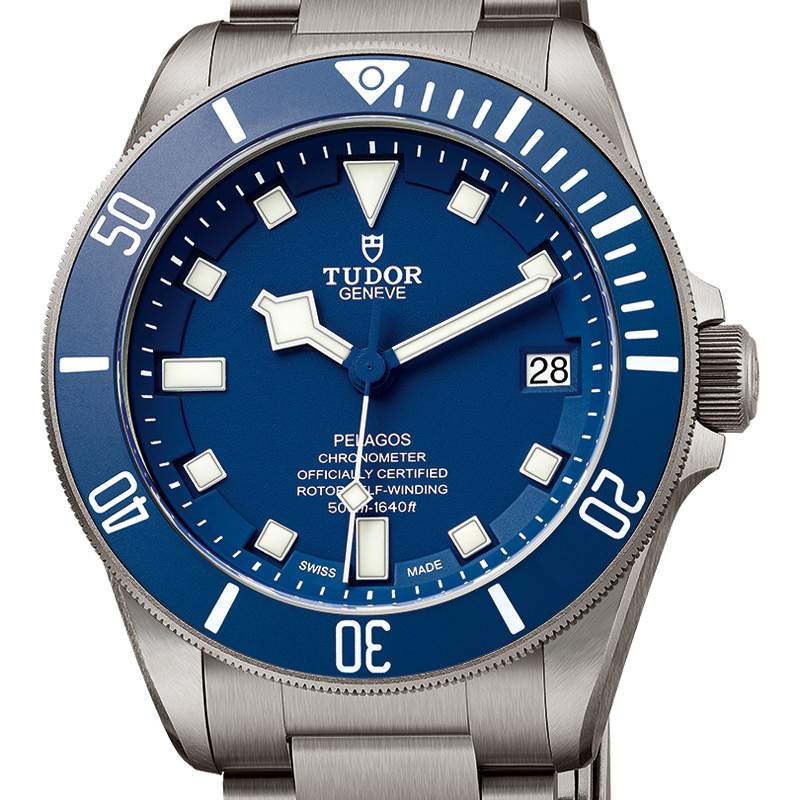 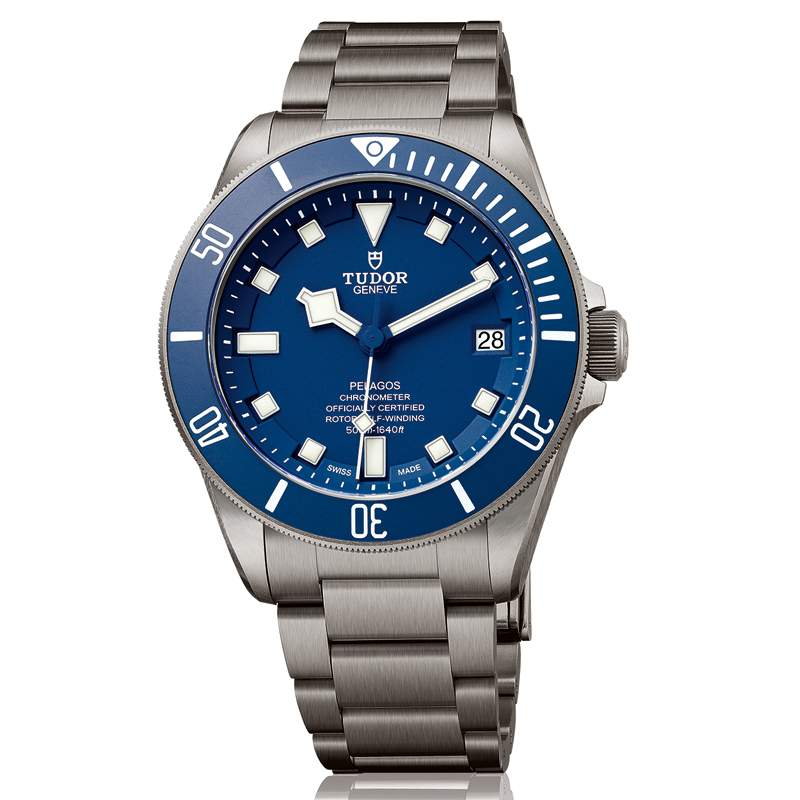 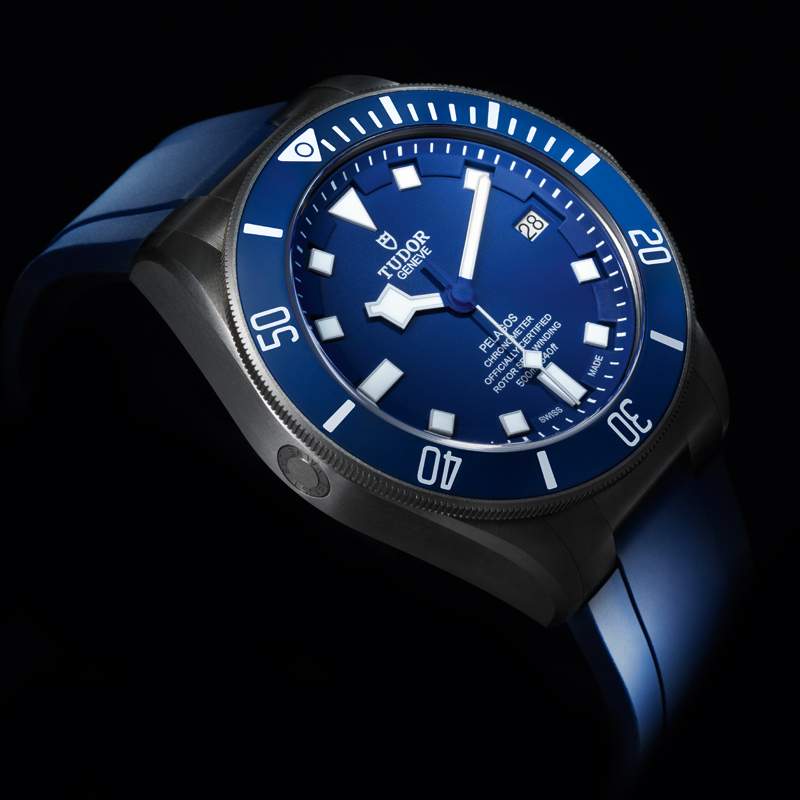 A magnificent example of a tool watch and the symbol of a lifestyle made up of aquatic adventures, TUDOR Pelagos is one of the most complete traditional mechanical divers’ watches on the market. In 2015, this emblematic model has been updated with a movement manufactured by TUDOR and an additional colour combination, a reference to the most glorious period in the history of the brand’s divers’ watches.

In 2015, North Flag and Pelagos become the first TUDOR models to be fitted with movements developed and produced by the brand itself. A logical evolution of TUDOR’s development process, this introduction represents the first stage in a major industrial strategy aiming to provide greater independence to the brand founded by Hans Wilsdorf in 1926.

A TRADITION OF QUALITY AND PERFORMANCE

By tradition, TUDOR’s watchmaking culture places the quality of its products and the experience of their wearers at centre stage. Historically, the movements used by the brand, sourced exclusively from Swiss suppliers, have always been required to achieve a high level of reliability and precision. The remit for the development of the new TUDOR movements retains these high standards, requiring an unprecedented level of performance for the brand’s products.

So the new calibre TUDOR MT5612, now powering the Pelagos model, provides impressive autonomy. Its power reserve of approximately 70 hours means that its wearer can, for example, take off the watch on Friday evening and put it on again on Monday morning without having to wind it. In addition to the hour, minute and central second functions, it provides an instant date display visible through an aperture positioned at 3 o’clock. Beating to a frequency of 28,800 beats/hour or 4 Hz, the calibre TUDOR MT5612 is regulated by a variable inertia oscillator with silicon balance spring spring, held in place by a traversing bridge fixed at both sides to improve resistance to shocks and vibrations. Its self-winding system is bidirectional. And, a first for a TUDOR product, it is certified by the Swiss Official Chronometer Testing Institute (COSC).

This technical update of the TUDOR Pelagos is accompanied by the introduction of a new colour combination for the dial, bezel and rubber strap. In addition to its original matt black version, this model is now available in matt blue, the emblematic colour of the brand’s divers’ watches since the 1960s and the one chosen by the French Navy for the TUDOR Submariners that have been used in great numbers by its divers. It presents the additional distinction “CHRONOMETER OFFICIALLY CERTIFIED” written on two lines on the dial, in reference to the chronometric certification of its movement, as well as its name: “PELAGOS”.

The history of the TUDOR divers’ watch is closely tied to its intensive use by professionals in underwater work, particularly by major navies throughout the world. The brand’s submersible products are genuine tools, which have evolved over the years to take into account the comments of these intensive users. When the Pelagos model was developed, it was with this heritage in mind and based on numerous tests carried out in real conditions all over the world – particularly on Lake Geneva, close to the TUDOR headquarters – that its characteristics specific to extreme diving were established.

The first of these is substantial waterproofness, guaranteed to a depth of 500 metres and equipped with a helium escape valve, an essential device for preserving the watch during so-called “saturation” dives. This technique consists of saturating divers’ organisms with a gaseous blend of helium and oxygen, allowing them to alternate periods of undersea activity with rest periods in the chamber, and therefore avoid very long decompression phases for the entire duration of their mission. As the helium atom is the smallest gas particle in existence, after a certain amount of time it is able to penetrate the interior of the watch despite its waterproofness. The helium escape valve therefore allows the gas to escape freely from the watch without damaging it during the long decompression stage in the chamber at the end of the mission. The helium escape valve accounts for this overpressure, and therefore any watch damage is avoided.

Another essential characteristic of a good diving instrument is its readability. Several solutions have been adopted on the Pelagos model in order to optimise this. Its dial presents generously- sized square hour markers, complete with a large quantity of luminous material, a guarantee of greater effectiveness that provides excellent contrast. The luminescence is blue, the last colour on the spectrum to be discernible at great depths. Its hands, particularly the hour hand with its characteristic square tip, allows the wearer to distinguish it from the minute hand at first glance. Incidentally, this configuration, often known as “snowflake” in collectors’ circles, is emblematic of TUDOR divers’ watches produced from 1969 onwards. This is another way in which Pelagos fits perfectly into the brand heritage. With the same goal for optimum readability, the ceramic disc of its titanium unidirectional rotating bezel features luminous markers that allow for all information to be read even in conditions of extremely low visibility.

The Pelagos model also stands out with its titanium bracelet featuring a steel folding clasp with a unique auto-adjustable spring mechanism developed and patented by TUDOR. This technical system allows the bracelet to be adjusted during the dive through contraction when the combination is compressed due to water depth. In turn, there is reduction in volume, and conversely, expansion, when the pressure decreases again during the diver’s return to the surface. An additional rubber strap is also provided with an extension system making it easily adjustable for any type of diving conditions.

Finally, titanium was chosen for the external parts of the TUDOR Pelagos for its intrinsic qualities of lightness – approximately 60% of the weight of stainless steel for the same volume – and great resistance to corrosion by seawater. The highly functional matt appearance of its entirely brushed finishes, its technological overtone and its colour are also excellent ways of conveying the watch’s technological and professional design attributes. In a continuation of its external parts, the TUDOR MT5612 movement that drives the TUDOR Pelagos also presents matt finishes, emphasising its precision, reliability and high level of technology through large surfaces that have been sand-blasted, embellished with details or sunray-brushed, and an open worked central rotor.

The TUDOR collection was developed according to two main cornerstones, heritage and technology. The watches it encompasses present a subtle alchemy of references to the brand’s history and modernity, masterfully measured according to the cornerstone to which they belong. In this spirit, and always with an experimental dimension in terms of materials and innovation, the technological cornerstone that forms the sporty lines of Noth Flag, Pelagos, Fastrider and Grantour presents a shared aesthetic language, the most representative feature of which is the entirely matt finish. Brushed middle cases, sandblasted details, matt colours: this choice provides a reading of the object through contrasting volumes rather than through plays of light. This is the language of plastic as opposed to a decorative approach, whose desired effect is the reinforcement of the functional and technological feel.